On paper, the Samsung 970 EVO Plus is the fastest consumer SSD shipping today. By the end of this review, we will both be convinced the new EVO Plus is the first true workstation-class 3-bit per cell SSD to hit the market. The drive is so fast that Samsung hasn't mentioned anything about a 970 Pro refresh, and with this level of performance, the company may never have to. 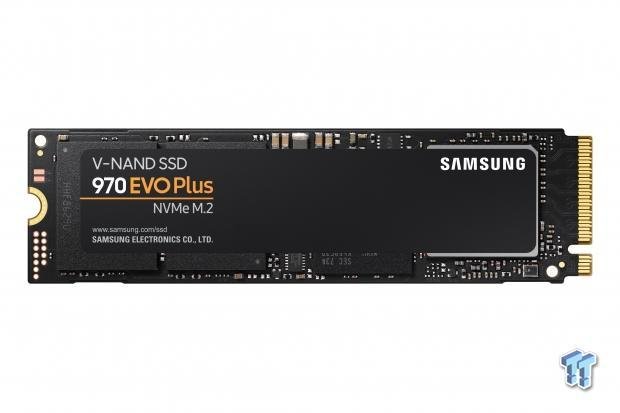 The source of the new 970 EVO Plus's power comes from the 5th generation V-NAND with 1.4 Gbps bus speed, the highest released thus far. The bus speed is 40% faster than the previous generation (64-layer). To put the bus speed in light, the Western Digital Black SN750 we tested the other day uses a flash to controller bus speed of 533 Mbps.

Samsung made other enhancements to the new 96-layer release. The data write speed is now 500µs, a 30% improvement. The response time to read signals is now 50µs. The last known improvement comes from the operating voltage. The new 96L memory uses just 1.2v compared to the 1.8v on the previous generation.

The 970 EVO Plus's story isn't just about technical marvel or a cluster of numbers. Samsung wants the full fairytale; a tale of redemption. For several generations, Samsung SSDs were the envy of the market. Everyone wanted a Samsung SSD for a number of reasons, but performance was always at the top of the list.

IMFT's 64L TLC caught everyone off guard. For the first time in the modern SSD era, Samsung couldn't claim the fastest consumer SSD (when you put the 970 Pro in the prosumer category with a price to match). In consumer applications, drives like the HP EX920, ADATA SX8200, Mushkin Pilot and Intel SSD 760p overshadowed the 970 EVO's performance. The new Samsung 970 EVO Plus is here to right the ship but in order to succeed, to have the happy-ending Samsung wants; it has to outperform its new challengers.

Samsung tapped the Phoenix controller that powers most of the modern NVMe drives from the company including the 983 ZET "Z-NAND" enterprise SSD that rivals Intel's Optane in responsiveness. Still, the controller is the same as the previous generation, and the newfound performance comes from the memory that we already discussed.

The sequential read performance peaks at the upper atmosphere of PCI Express 3.0 x4, 3,500 MB/s. The sequential write performance is the highest on record yet, 3,300 MB/s. This is 300 MB/s higher than the new drives with the Phison E12 and Silicon Motion, Inc. SM2262EN controllers.

The random performance also breaks new ground. Samsung claims up to 620,000 read and 560,000 write IOPS for all four capacities.

A 970 EVO Plus carries over support for TCG Opal and Microsoft's eDrive. There are very few retail consumer SSDs shipping today with self-encrypting drive (SED) technology on the market today. The EVO Plus features AES 256-bit hardware-based encryption to keep your data safe while also keeping performance high compared to software-based encryption engines.

Samsung made enhancements to Dynamic Thermal Guard (DTG) to deliver longer sustained writes, at a higher speed, before throttling the drive.

The endurance ratings stayed the same as the previous generation with 150 TBW for each 256GB block of memory. 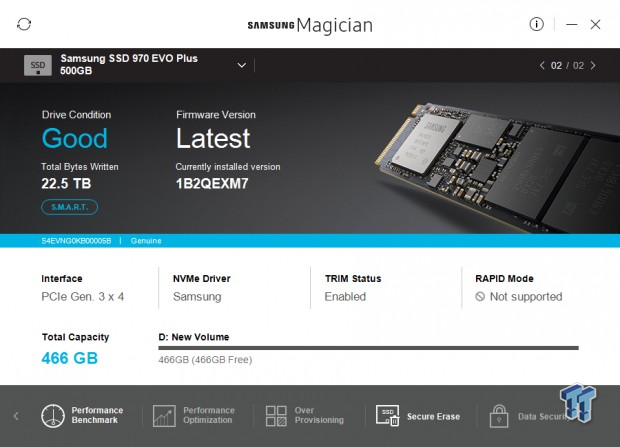 The 970 EVO Plus series works with Samsung's Magician and Data Migration tools. 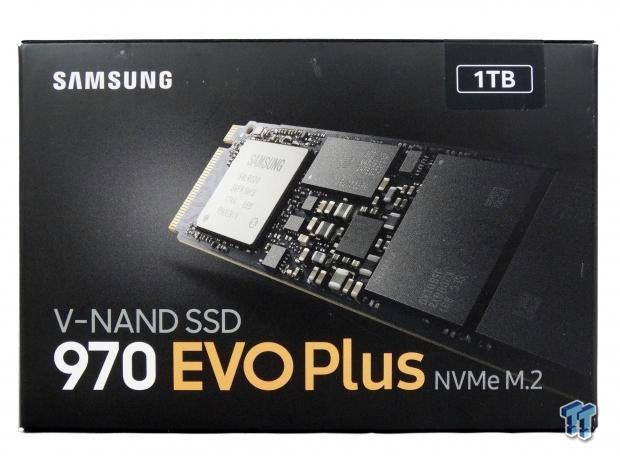 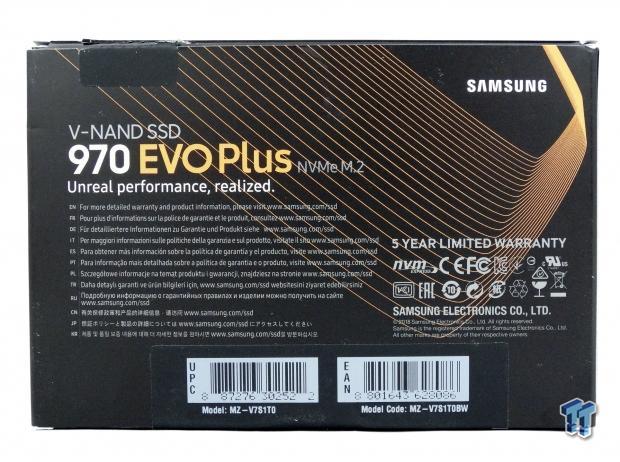 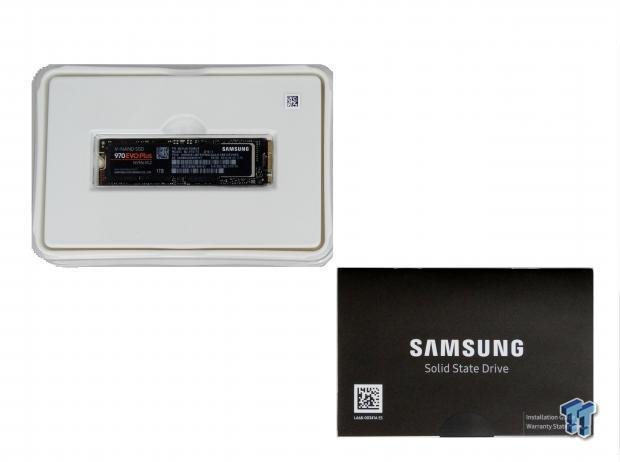 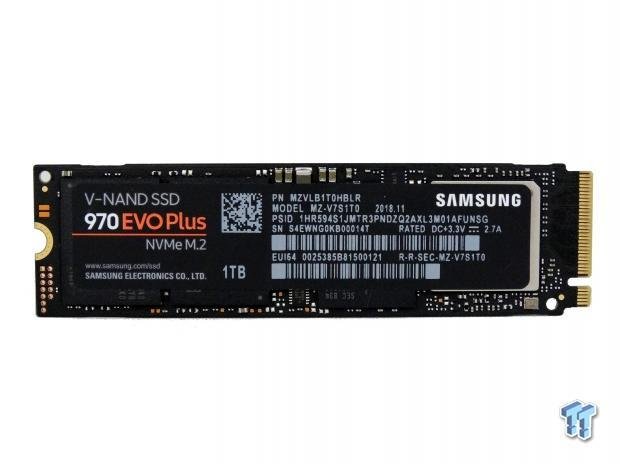 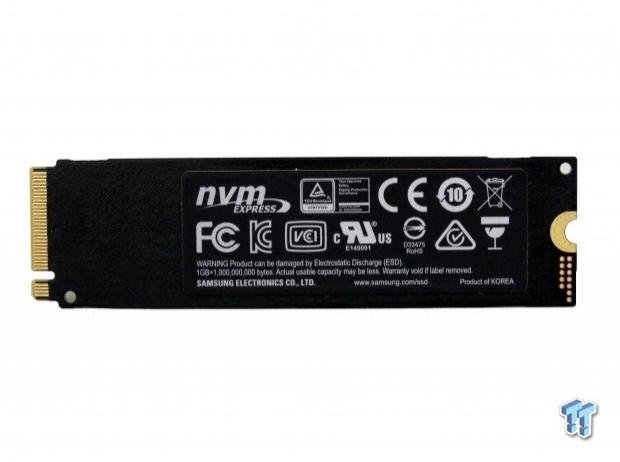 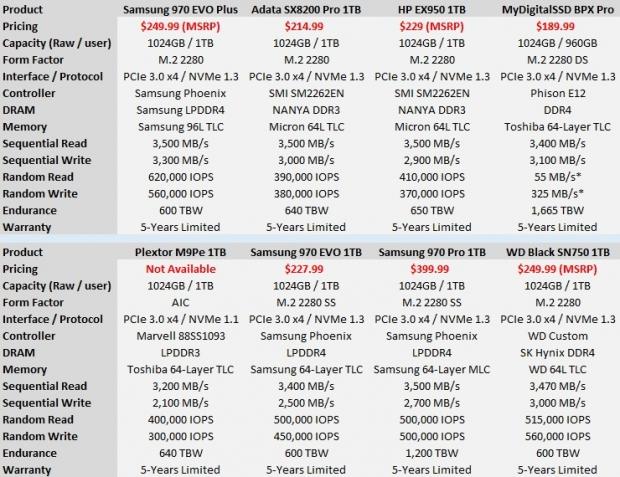 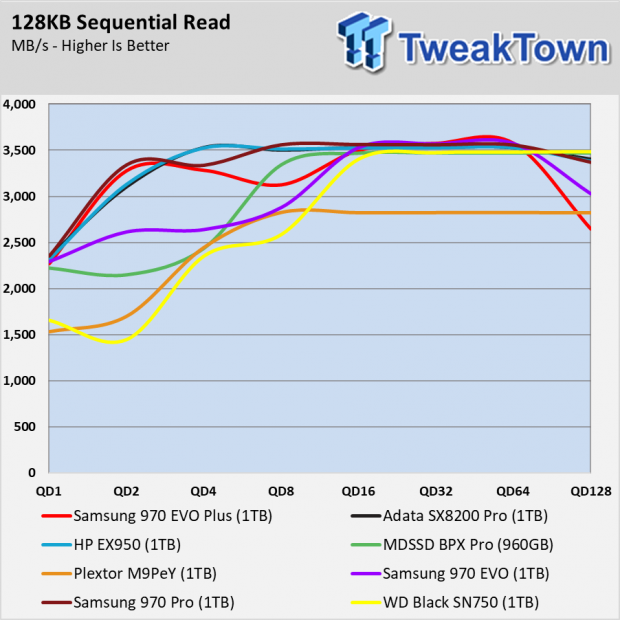 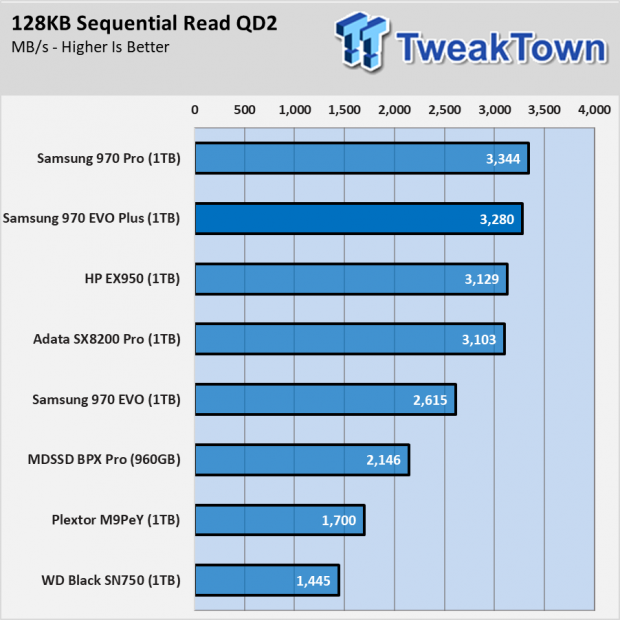 The 1TB 970 EVO Plus delivers sequential read performance more like the 970 Pro than the previous generation EVO. Many of the "next-gen" NVMe products reach the 3,500 MB/s possible with PCIe 3.0 x4, but nearly all consumer workloads use low queue depths, so the peak performance at high queue depths is virtually irrelevant. 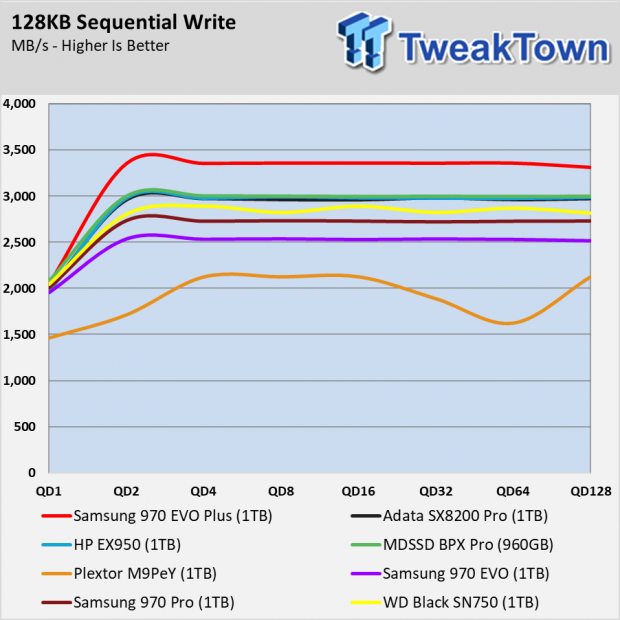 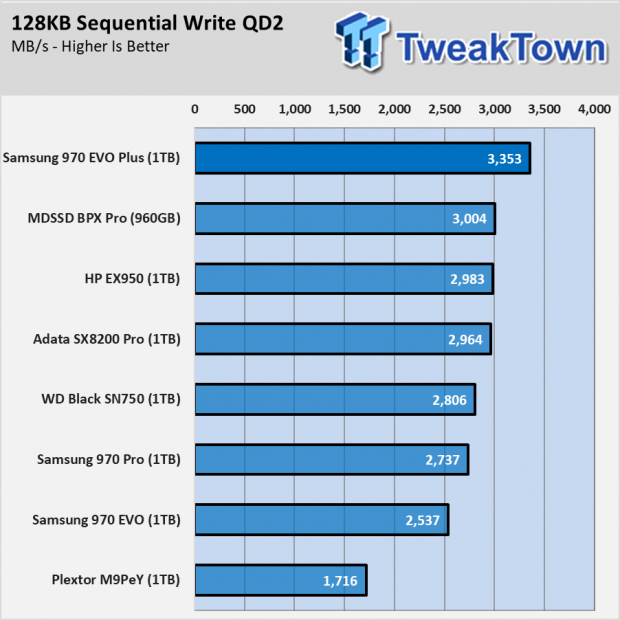 The sequential write test using burst data shows the 970 EVO Plus without equal. Until now, we just assumed 3,000 MB/s sequential write performance was the upper limit of PCIe 3.0 x4 after overhead, but that's not the case. 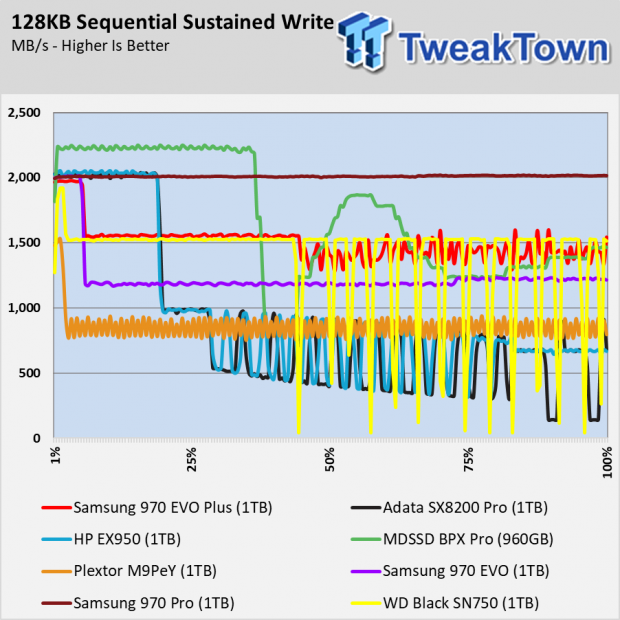 In this test, we write 128KB block data to the drives in a single stream across the entire user area. The TurboWrite of both 970 EVO SSDs write at the same speed as the 970 Pro. The dynamic sized buffer falls off quickly, and this is where we see a 300 MB/s difference between EVO and EVO Plus.

Users can write to nearly 50% of the overall capacity before seeing any signs of inconsistency from thermal throttling. 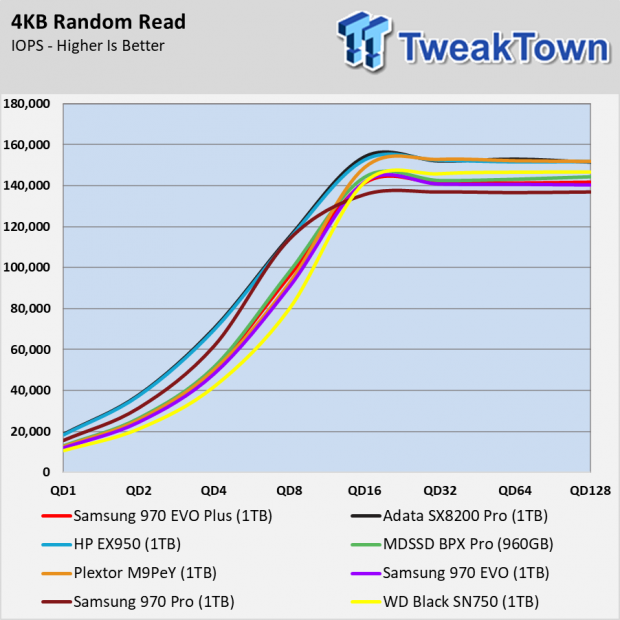 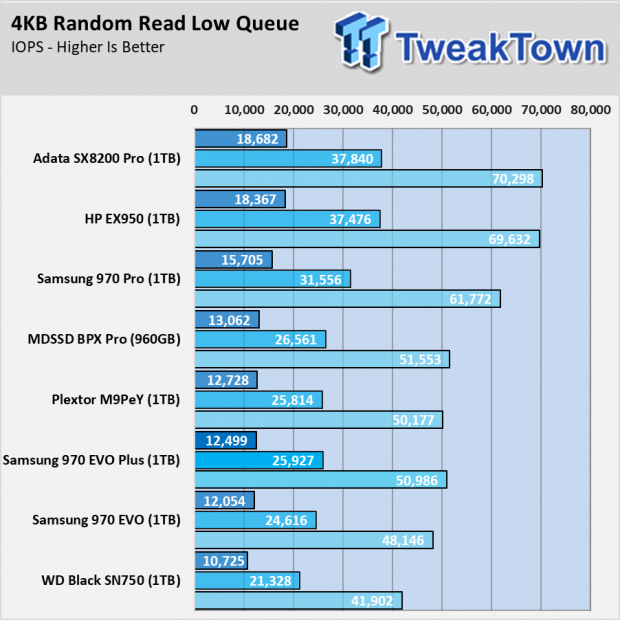 We expected the EVO Plus to close the gap on the drives using the SMI SM2262EN controller, but that didn't happen. We saw a small gain over the previous generation 1TB EVO SSD, but the drive never reached 970 Pro levels or the massive 18,000 IOPS in our test. To be clear, our test uses bursts of data, so our numbers are slightly lower than every company's random read performance claims, but they are down for all drives.

We will have to see how the lower than expected random performance impacts application workloads on the next page read. 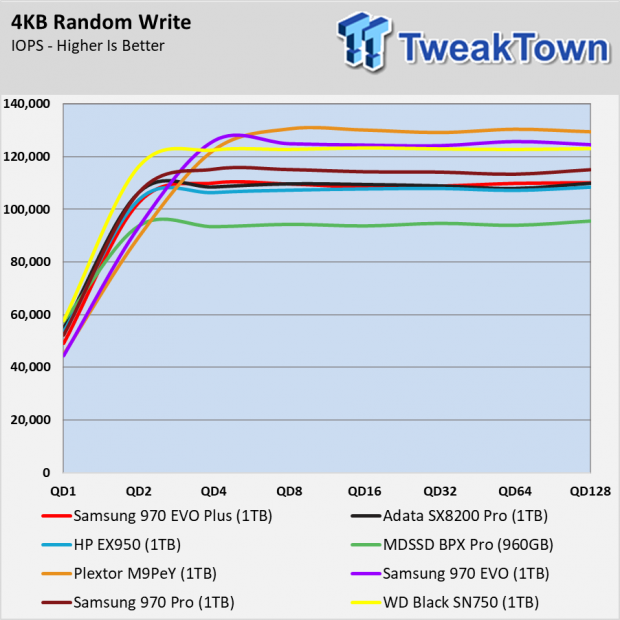 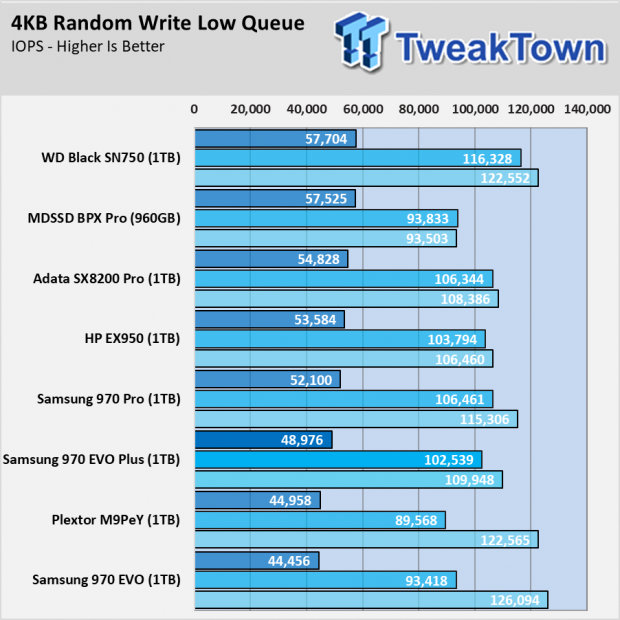 The 970 EVO Plus didn't see an increase in random write performance either with a single worker in our test software. The new flash and Samsung's controller optimizations do increase performance through better efficiency, but you need more applications running off more than a single CPU core to get the full benefit. 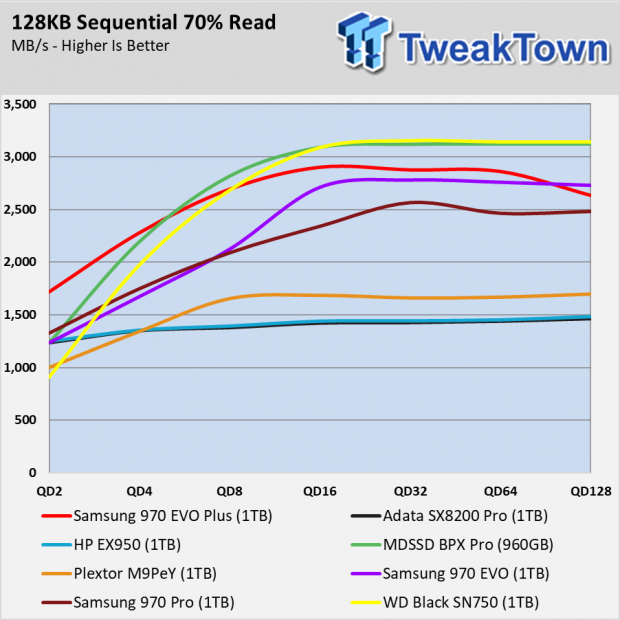 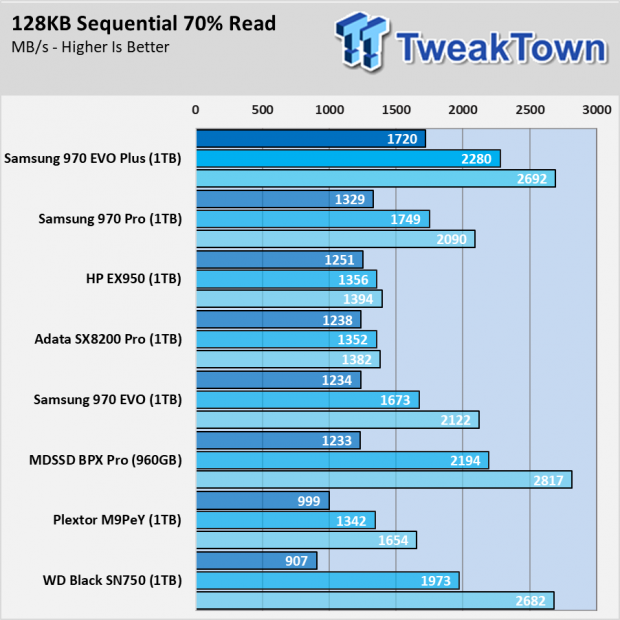 The efficiency increase comes through in the sequential mixed workload test. Here, the EVO Plus breaks new ground for QD2 70% reads and leaves the other drives well behind. The BPX Pro closes the gap at QD4, and the WD Black SN750 joins the group at QD8. 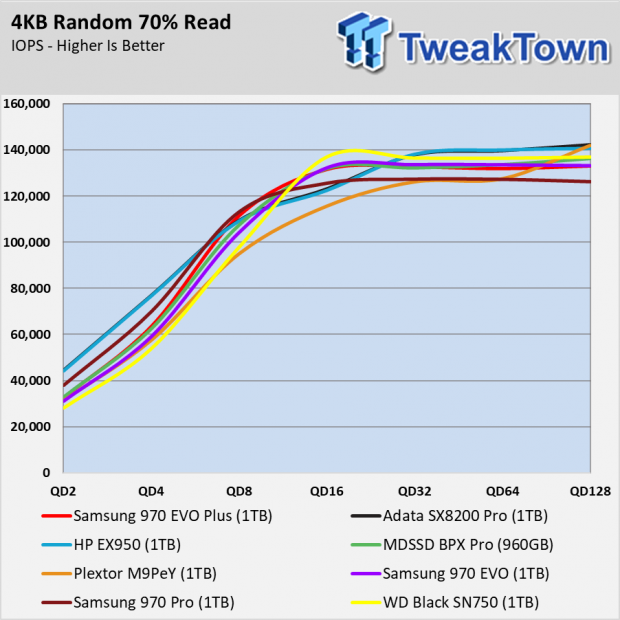 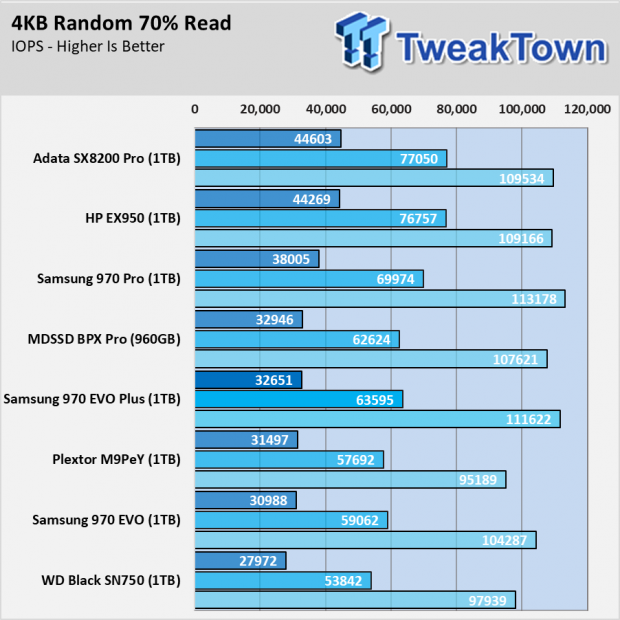 The 970 EVO Plus' random performance shines though in the mixed workload test. I'm hesitant to call the performance lackluster because most companies about love to score nearly 33,000 IOPS at QD2 in this test. The problem is the nearly 45,000 IOPS coming from the new drives with the SM2262EN controller and Micron 64L TLC flash. 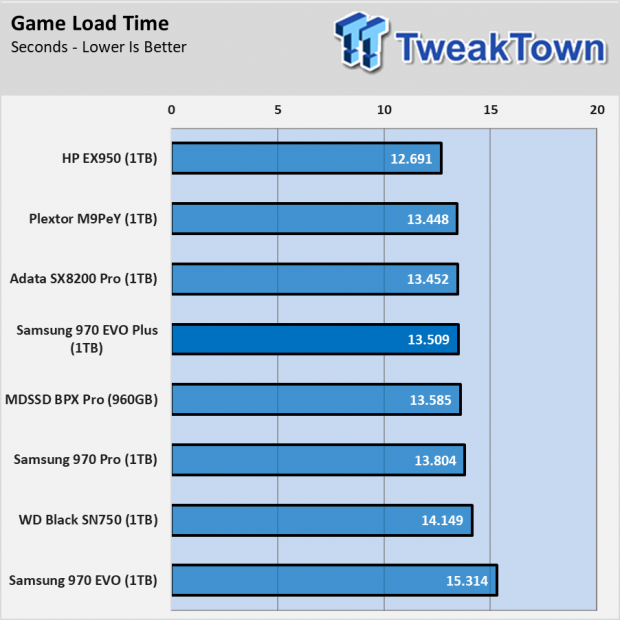 As we've shown multiple times in the past, random read performance is directly related to how fast consumer applications load in Windows. The new 970 EVO Plus improves on the game load times compared to the two previous generation 970 products and falls in line just behind the new ADATA SX8200 Pro. 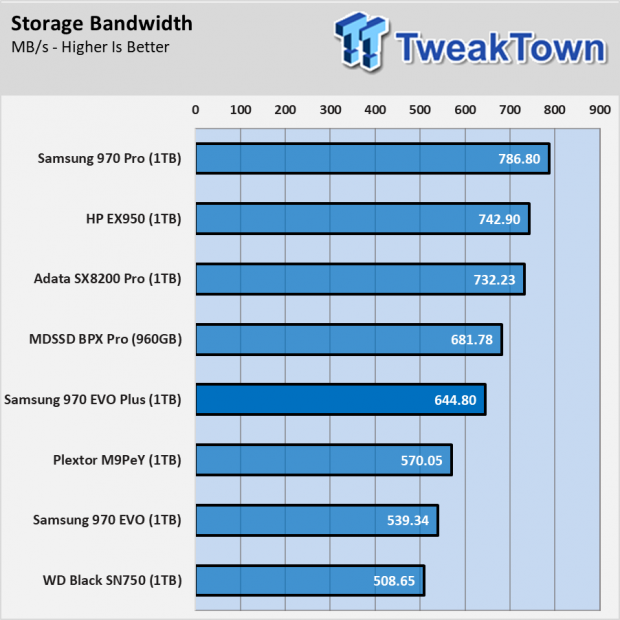 The PCMark 8 Storage Bandwidth test uses nine common applications to fill ten tests in the suite. The tests run back to back with pauses between the workloads just like most of us run applications at home.

The 1TB 970 EVO Plus scores 645 MB/s in this test. The score is solid for a consumer drive and outperforms the older models on the chart once you set aside the 970 Pro with 2-bit per cell flash. The issue comes once you factor in the other next-generation SSDs that outperform the EVO Plus. 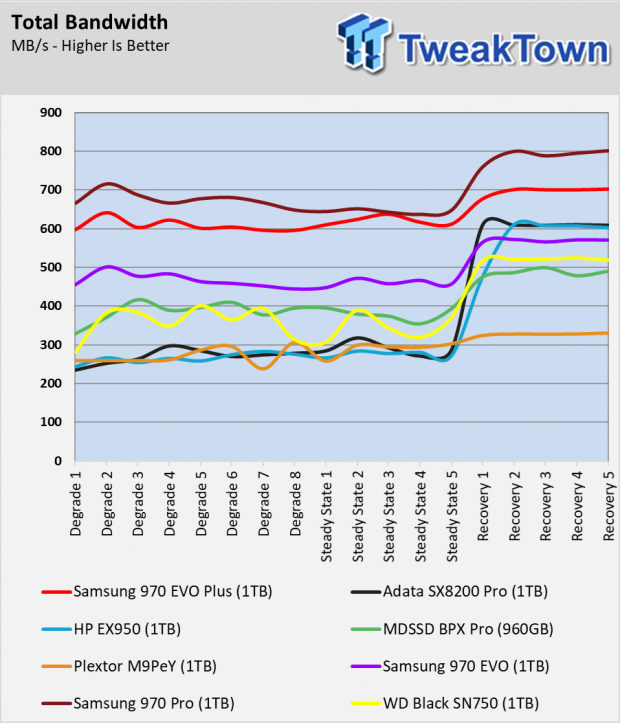 The Extended Storage test uses the same nine applications but wears the flash into a preconditioned steady state first. From the extremely worn state, the drives run the applications suite with measurements at different points and later moves into recovery phases with five-minute pauses between each pass. The pause allows the drives to clean up the flash through background garbage collection.

Samsung's new flash and programming move the 970 EVO Plus into workstation-class performance under heavy workloads. This is an important step for the EVO series and Samsung's 3-bit per cell flash. 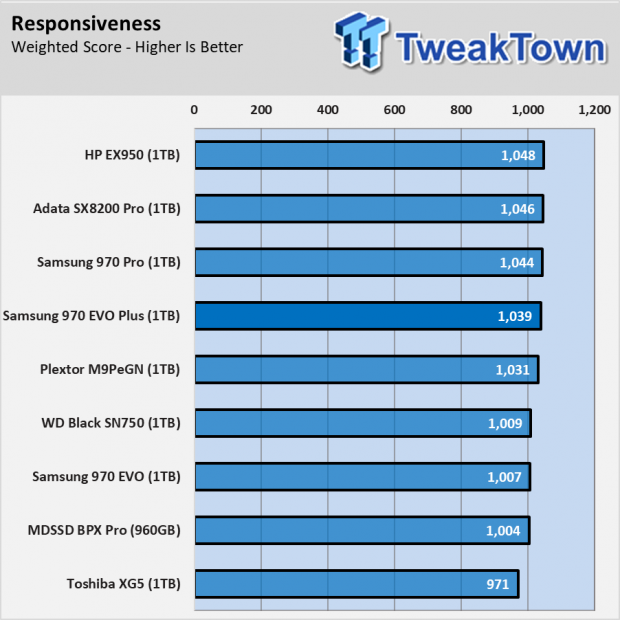 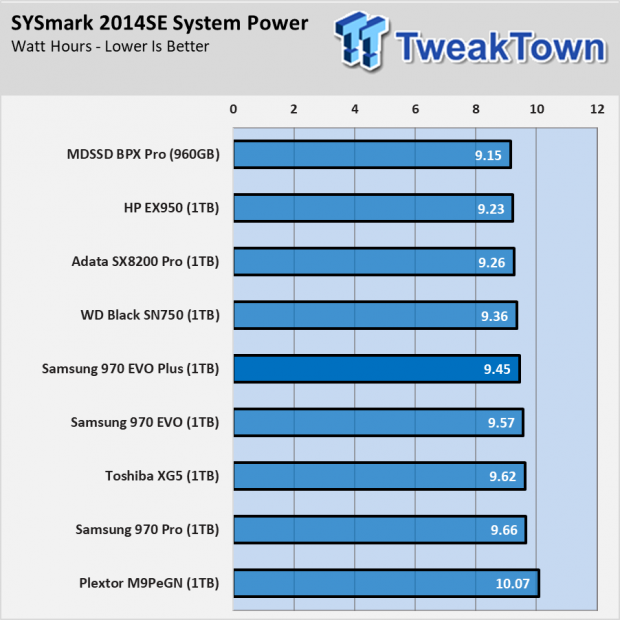 Workstation performance under heavy workloads is still different from consumer and office workloads. The Responsiveness Test scores latency, what makes your computer feel fast or slow. The 1Tb EVO Plus does a good job outperforming the previous generation but fails to overtake the 970 Pro and new SM2262EN drives. 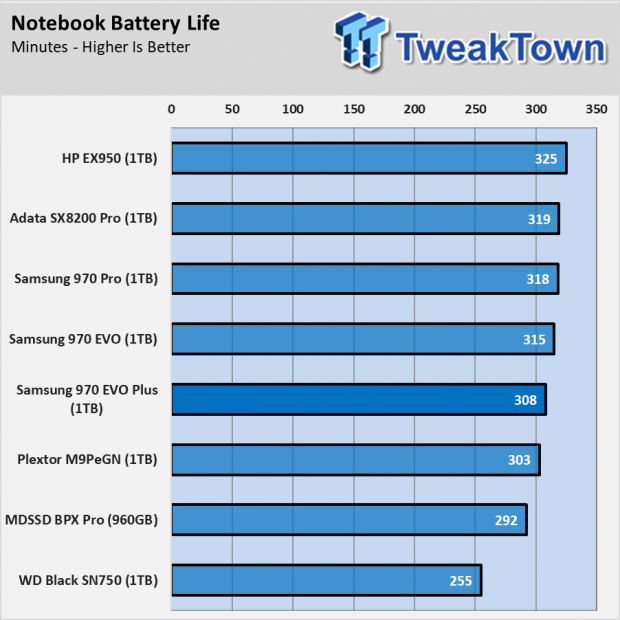 Samsung's new 1.2v 96-layer flash allows the 1Tb EVO Plus to nearly match the previous generation in our Notebook Battery Life Test with BAPCo's MobileMark 2012 version 1.2. We use the Lenovo Y700-17 gaming system for this test, and the EVO Plus gives us just over 5 hours of on-battery time.

Samsung taught the 970 EVO Plus enough new tricks to keep it on stage but not enough to steal the spotlight. Today we lit the 1TB model, and it panicked like a kindergarten student at the first school recital.

Of the five new 1TB NVMe SSDs we tested over the last couple of months the 970 EVO shows the highest performance on paper. In some workloads, the drive takes a few performance wins but those come in far fewer than year's past when the EVO series was the dominant consumer SSD. Some of the other companies have caught up, overtaken, and now sprinted away in key performance categories

Not every disappointment is purely performance related. Every SSD we compared to the 970 EVO against ships with a 5-year warranty. The 970 EVO Plus ties for the lowest endurance in the 1TB class with 600 TBW. When it comes to pricing, you will pay more for this drive than the SX8200 Pro, HP EX950, and MyDigitalSSD BPX Pro. Paying more to get less is the opposite of a good value.

None of this means we dislike the 970 EVO Plus. The 1TB drive we tested is the first with 3-bit per cell flash we would use in a workstation for heavy workloads. In a heavy write environment, this drive is your best compromise between general and professional application performance. Most of the other drives deliver an exceptional user experience under light workloads thanks to heavy reliance on the cache but prove to be underwhelming when pushed hard.

The issue with this strategy is that Samsung already has the best flash-based workstation/prosumer SSD shipping today in the 970 Pro. Through additional tuning the company may be able to get the EVO Plus series back to the top of consumer performance but for that to happen the series will need to pick up the random read performance a bit more. If I'm paying a premium price for an NVMe SSD in 2019, then I want the premium performance to match.

The Bottom Line: Samsung's proven reliability keeps the EVO Plus intresting but we feel the company could have done more to improve the user experience.