If you are on macOS, the T4 RAID is one of the best direct attached platforms currently available.

Going into mid-2018, CalDigit is looking to continue pushing its storage solutions to the next level. With much of their lineup now moved over to Thunderbolt 3, it was only fitting that their flagship four-bay RAID enclosure T4 made the move over as well.

Nearly four years ago, we had the T4 Thunderbolt 2 in the lab for testing. That unit produced 730 MB/s read and write via RAID 0 and 539 MB/s read 502 MB/s write via RAID 5 using Black Magic Disk Test and Thunderbolt 2. The new T4 RAID shares much of that design including the chassis, drive tray arrangement and cooling. What has changed is the interface, going from Thunderbolt 2 at 20Gbps to Thunderbolt 3 at 40GBps. CalDigit has also added the ability for the T4 RAID to charge your MacBook with 85 watts of power and it can also shoot pixels to a secondary display at 4K60 via the DP connection.

As for configurations, the T4 RAID does have both SSD and HDD models. In-house, we have the 8TB HDD model for testing. Marketing says this model is capable of 750 MB/s read and write in RAID 0 and 550 MB/s read and write with RAID 5. That said, HDD models include 8, 12, 16, 24TB and 32TB models while the SSD platform includes a single 8TB capacity. MSRP of the 8TB CalDigit T4 RAID comes in at $899.99 with a five-year warranty. Compatibility extends to macOS 10.12 and later. 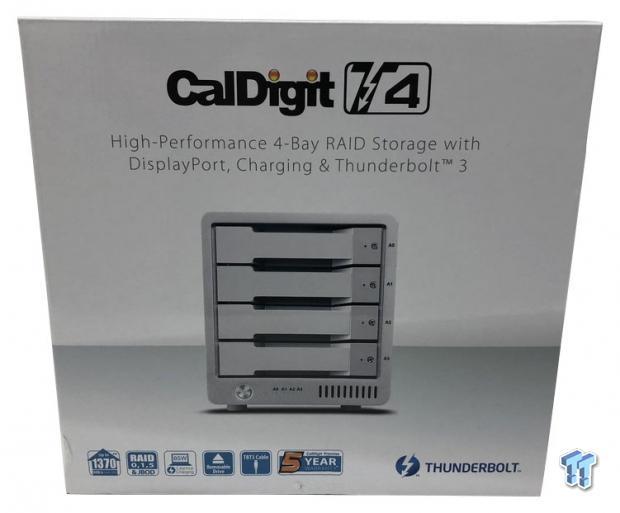 Packaging stays with the same design. We have an image of the T4 with marketing laid out below. 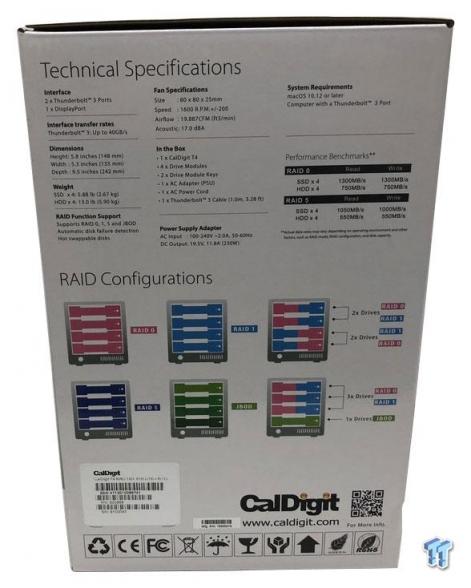 On the edge of the box, we have a full specifications list and RAID configuration diagram. 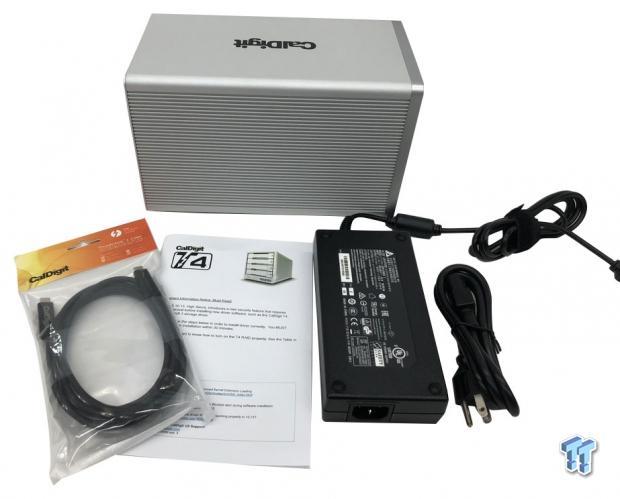 Included with the T4, we have a Thunderbolt 3 cable, power adapter and reading materials. 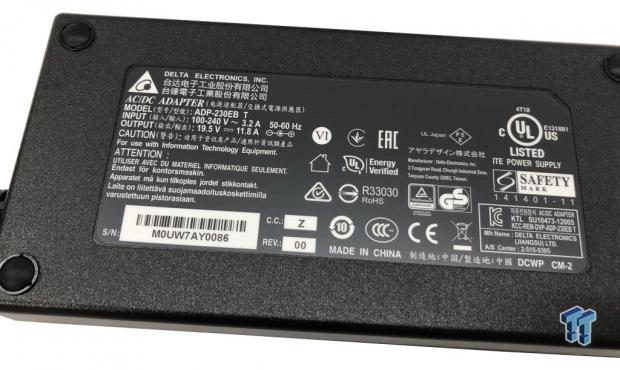 The power adapter comes in at 19.5v at 11.8A allowing for significant overhead to support the 85w charging capability. 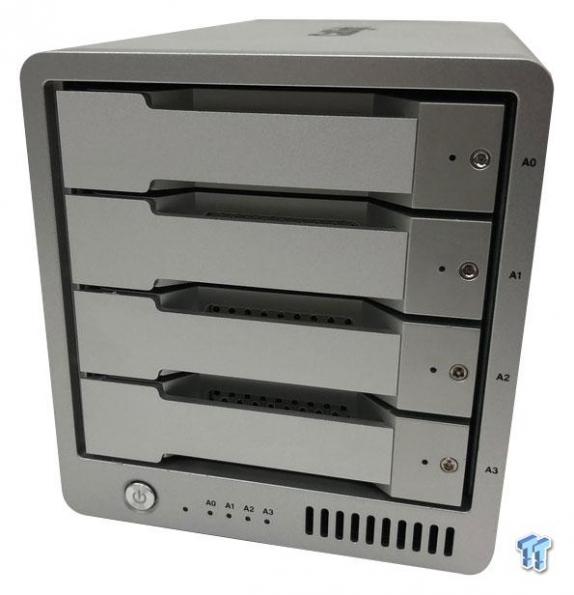 Looking over the enclosure, we have all fours bays with locks on the right. Down below we have the power button and activity LEDs. 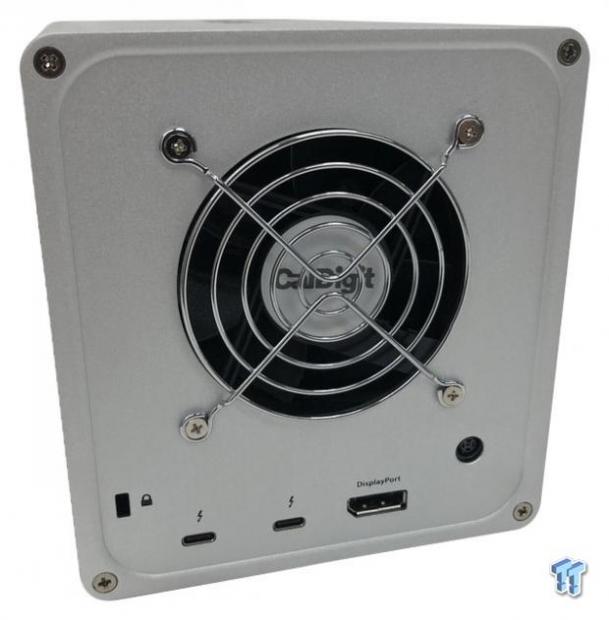 On the backside, we have two Thunderbolt 3 ports and a single DP. Further CalDigit removed the proprietary directional power input opting instead for a standard barrel connection on the new T4. 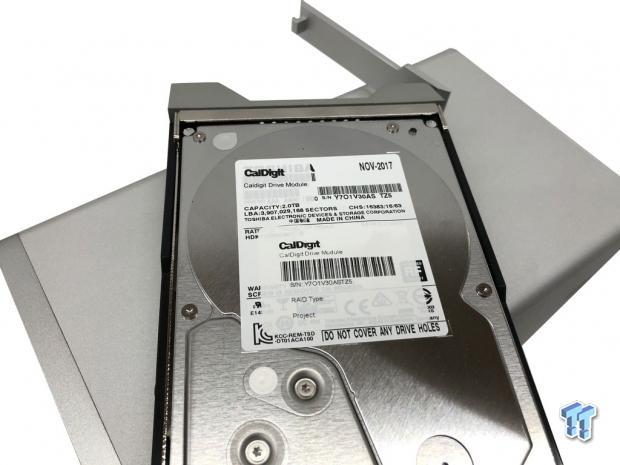 Staying with tradition, CalDigit supplies Toshiba HDDs with the T4. 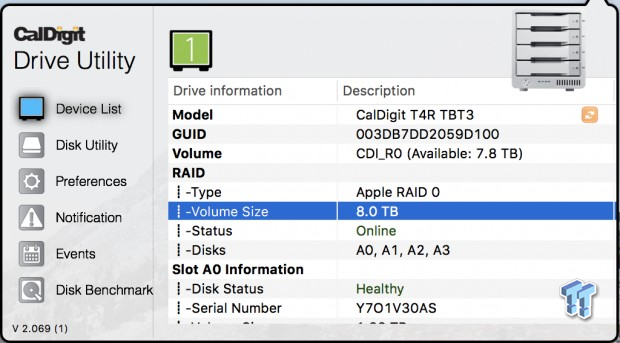 The drive utility hasn't changed much with the new T4. This allows you to see each drive slot along with the RAID mode. Further, you can swap RAID modes in disk utility and look at smart data in preferences. At the bottom, CalDigit has included a simple disk benchmark to check the performance of your array. 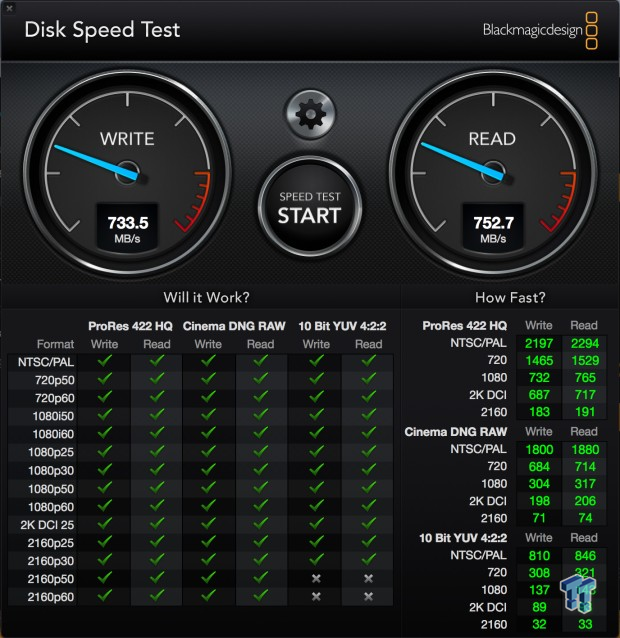 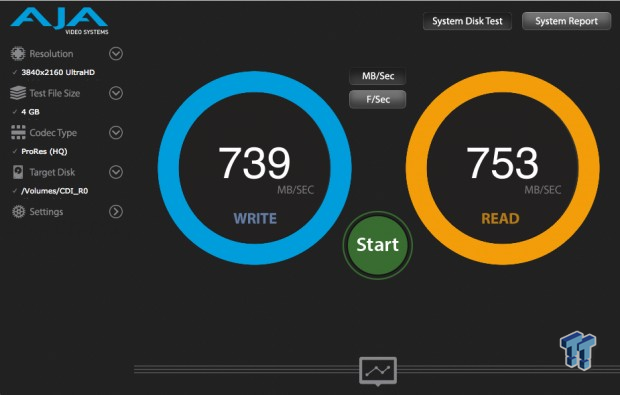 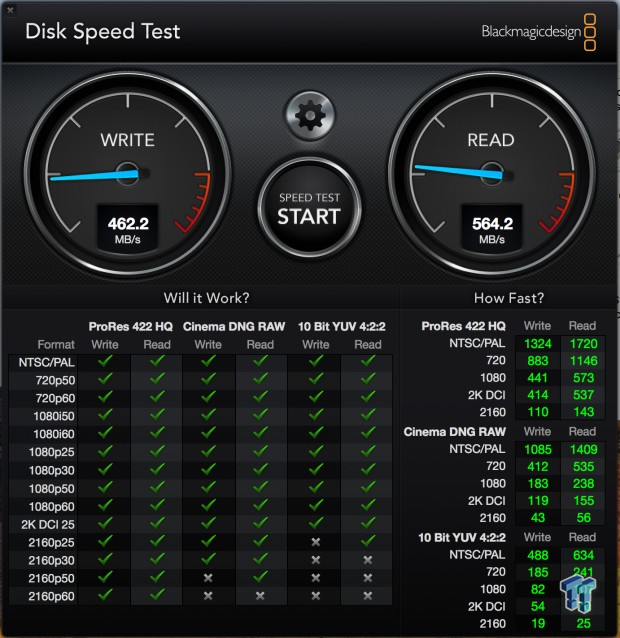 Moving to RAID 5, performance does drop slightly down to 564 MB/s read and 462 MB/s write. 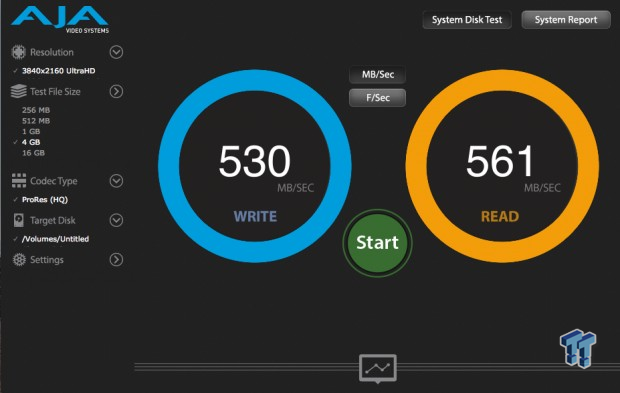 Performance still hits 750 MB/s with HDDs in RAID 0 and 550 MB/s in RAID 5. CalDigit has changed up the capacity lineup, so you do get a bit more storage per dollar in comparison to the last generation platform.

As seen in the testing above, the T4 is easily capable of over 100fps working with UHD frames. The T4 comes from the factory in RAID 5 but is easily configured to RAID 0 or 1 with the Drive Utility found on the support site. While we weren't able to test the charging capabilities since we are testing with an iMac, 85W is strong enough for the highest end MacBook models.

The Bottom Line: If you are on macOS, the T4 RAID is one of the best direct attached platforms currently available.