They have been around forever, and while the name is a mouthful, the Ballistix Tactical Tracer RGB we have been sent, have their name rooted deeply in the history of Crucial. As of right now, four kits have hit the market, all of which are based on 8GB sticks. Two of the kits are 16GB in density, and the other pair of 32GB, but can be had in either 2666MHz or 3000MHz speeds. As for the specific memory we have on hand for this review, it is a 32GB kit of 2666MHz sticks, sporting the part number BLT4K8G4D26BFT4K. Crucial bills this kit to run at 2666MHz with timings of 16-18-18-38 2T and is shown everywhere to run at just 1.20V.

The new Ballistix Tactical Tracer RGB memory is not only lit at the top, and offers various patterns and modes of light displays, there is also one thing about this DDR4 that we have not seen before this. Crucial went through the trouble of making the light bar that tops the memory removable. Why might you ask? Because they have made it so that those with 3D printers can make custom tops for the RAM, and have even made a file to start from, which has the dimensions of the base already there. While you could attempt to address the coloring of the LEDs via motherboard software, Crucial also made this memory work with the MOD software, which makes changing them via software a cinch.

To delivered this review, we have moved away from the 7740X we used for dual channel testing, and have popped in the 7800X processor. However, everything else about the test system remains the same. Hopefully, with the RAM we picked from our stash to help fill the chart and offer perspective, along with the results you will see from the Crucial Ballistix Tactical Tracer RGB DDR4, it will shed light on what today's quad channel kits bring to the table. That way we can see if this memory is what you need to make your day faster and more productive. 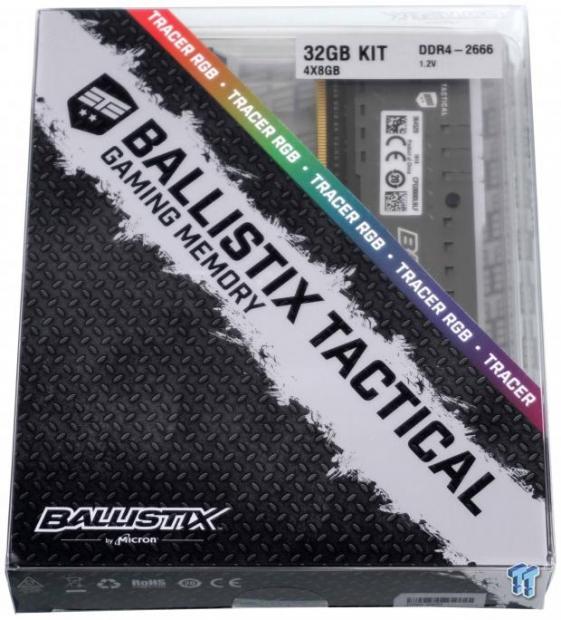 The packaging is made of plastic, where a clear box has been printed with all of the information you need to know, right on the front. The sticker at the top will vary between the kits, but as seen, we have a 32GB kit of 2666MHz memory inside. Also, with the top corner not covered with information or design elements, we also get a sneak peek at the memory inside. 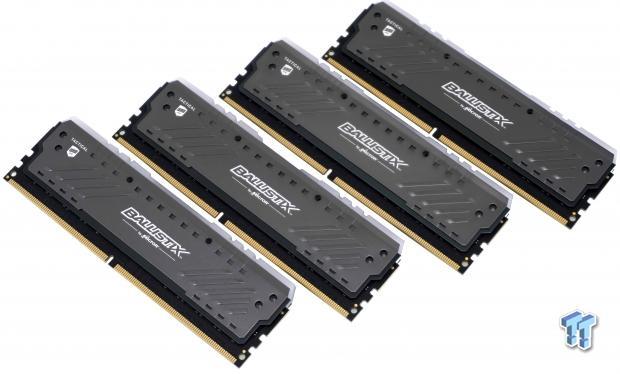 Out of the box, we can see all four sticks with the black PCBs and two-part metal heat spreaders. On the left end of the sticks there is the Tactical name and logo, but dead center of each we find the Ballistix name. There is a lot of design work that goes into the spreaders, and the two black pins nearest the white top sections are to allow removal of it. 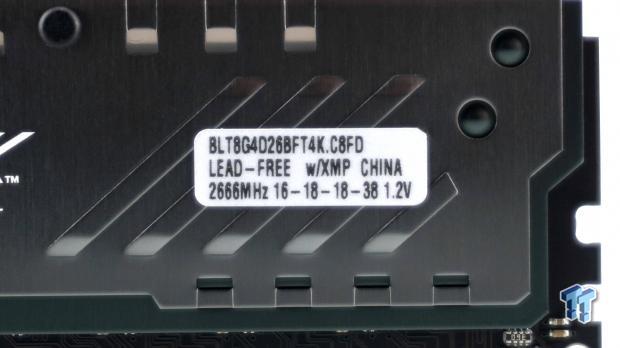 On the reverse of each stick, we find the product stickers. On it, we are shown the BLT8G4D26BFT4K part number, and we also see the speed, timings, and voltage used once the XMP profile is enabled. 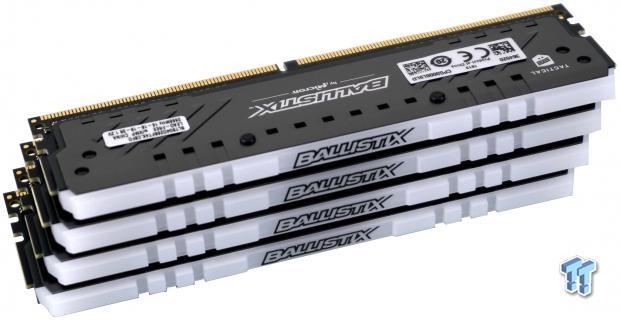 Most of the time this kit is used, you will be looking at the top of the sticks, and Crucial spiced the appearance up here as well. The white plastic inserts that cover the LEDs is notched on either side of the Ballistix name and angled at either end for a cleaner look as it works its way back under the heat spreader.

To remove the top LED cover, all you need to do is pull out a pair of black plastic pins. Once removed, the white plastic will slide out either end, and any 3D printed replacements can go back in between the heat spreaders the same way. 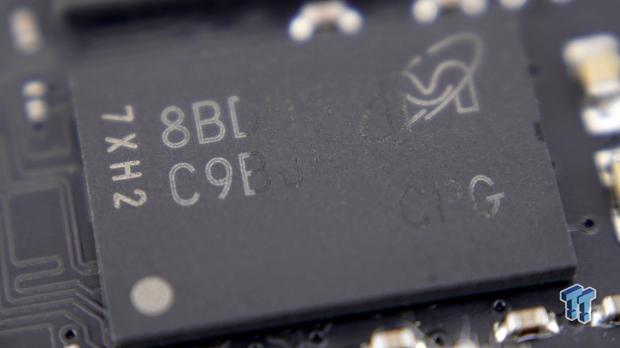 Attempting to use software to read the ICs resulted in a message saying the SPD was not programmed, so we resorted to old methods of finding out. The tape on the heat spreaders pulled off much of the paint, but you are looking at Micron ICs with 8BD45C9BJF printed on each of them. 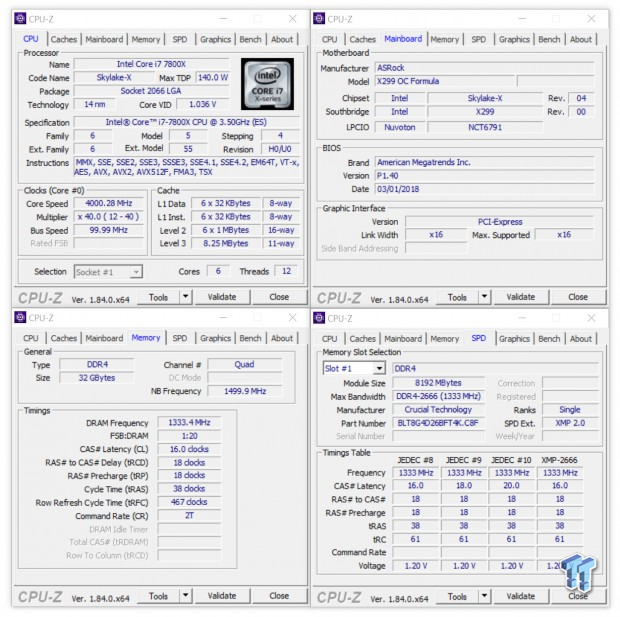 Right out of the gate, just by applying the XMP profile, our Crucial sticks are running at 2666MHz with timings of 16-18-18-38 2T. The one variance we do find is that the ASRock motherboard is applying 1.25V to the VDIMM rather than the 1.20V advertised on the box and the sticks. 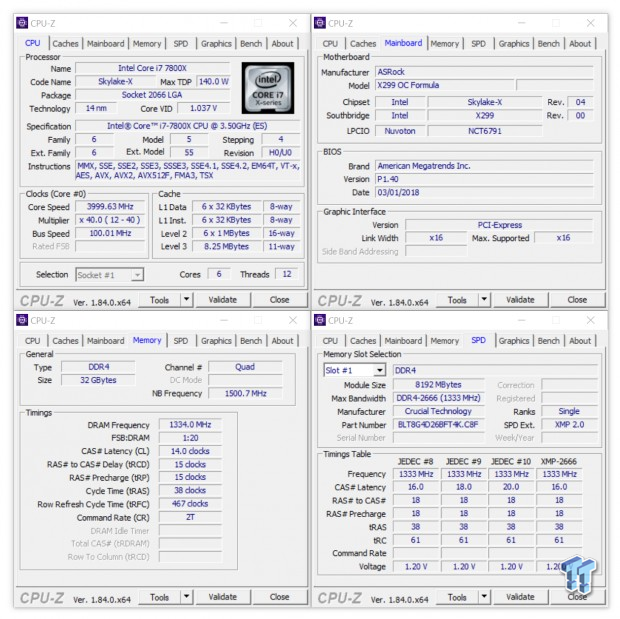 Looking to reduce the timings, we did not get very far, but the 14-15-15-38 2T timings are still decent for the speed we are running. It did take us setting the VDIMM to 1.35V to achieve this, as well as a slight boost to the VCCIO and VCCSA. 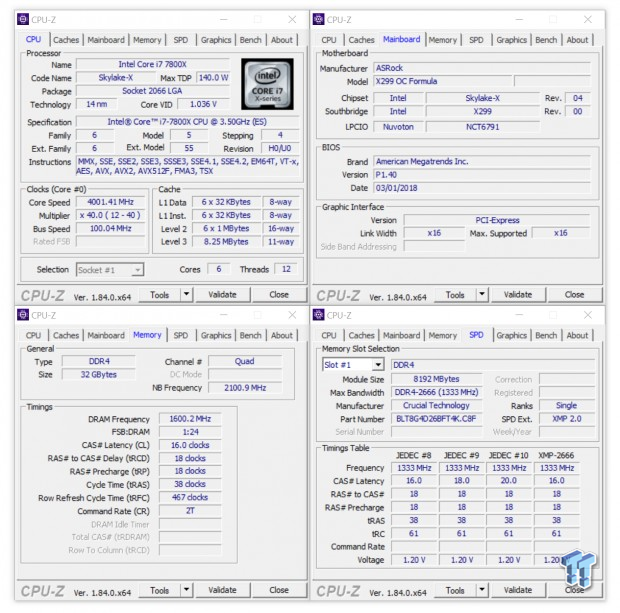 We also attempted to hit the maximum speed of the kit, while keeping voltages within safe limits. To achieve the 3200MHz seen in this screenshot, we were using 1.35V for the VDIMM, 1.30V for the VCCSA and 1.20V for the VCCIO. Tinkering with the voltages we were able to go faster, but what we have here is easily attainable without pushing your luck or the voltages too far. 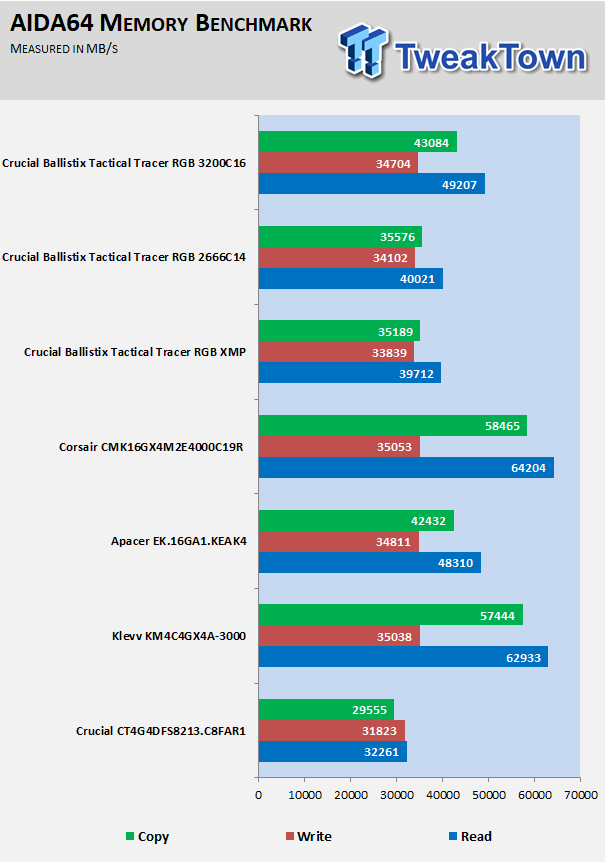 Using AIDA64 as one of the metrics to test with, we see that the Ballistix Tactical Tracer RGB memory plays into it above the 2133MHz kit, and below the 3000MHz set, as expected. Lowering the timings helped thing a little, but overall speed does push the results past the 3200MHz Apacer, but nowhere near the 3000MHz KLevv memory. 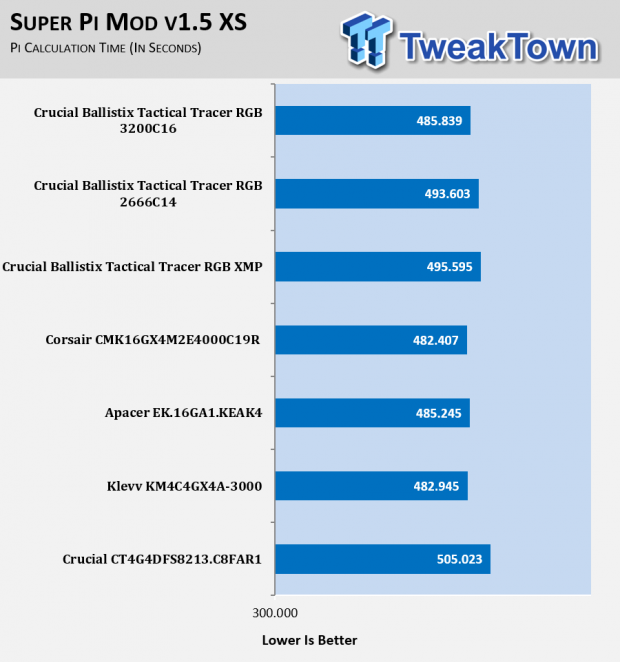 Super Pi takes longer to complete than with dual channel RAM, and again, the Crucial memory places as one would expect. When timings are reduced, or speed is increased, we see similar results to what we saw with AIDA, improving times ten seconds with maximum speed used, but still slightly behind the KLevv and nearly as fast as the Corsair. 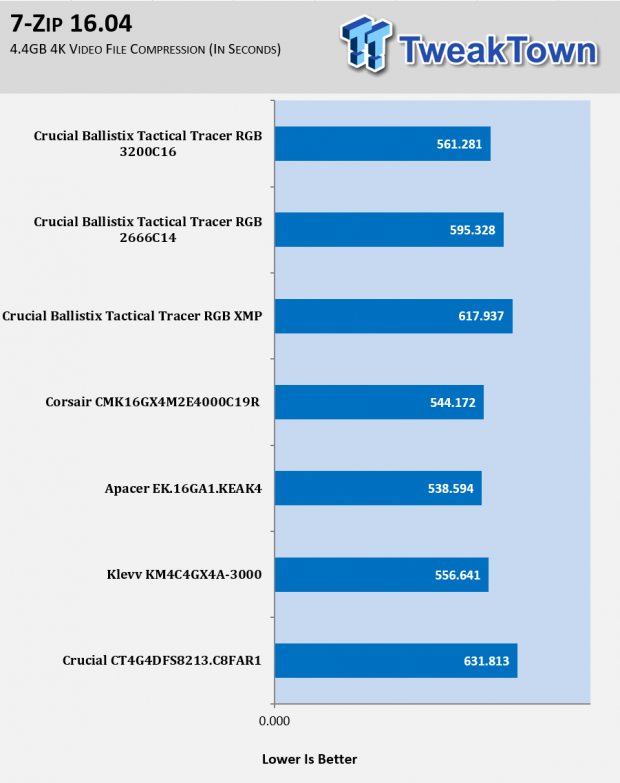 Testing with 7-zip is a close race between all of the RAM in this chart, and again the BTT RGB memory falls in between the 2133 and 3000MHz kits as it should. Lowering the timings gave us a twenty-two-second advantage, where utilizing the speed it has left in the tank is nearly a minute faster than using the XMP profile.

Crucial has done well, placing where they should in the charts using the XMP profile for 2666MHz with no surprises. Use of low voltage is something many are looking for with an HTPC or low-power rig to take on the go, but with the fancy spreaders and trick lighting effects, we would suggest the latter, as they would be wasted in a closed chassis with no view. Corsair took a lot of time engineering this memory for not only longevity and reliability, but also for the bling factor, and of course, the ability to 3D print tops for them, and make something nobody else on this big blue ball has.

When the RAM is first powered on, we got a strobe of RGB LEDs, where all sticks are a solid color, and it runs through the full spectrum of options this way until Windows comes to life. Once at the desktop, the view you see in the image below is what you get. All of the lights are light blue or teal; that is until you download and open the software, Crucial offers, for this memory. 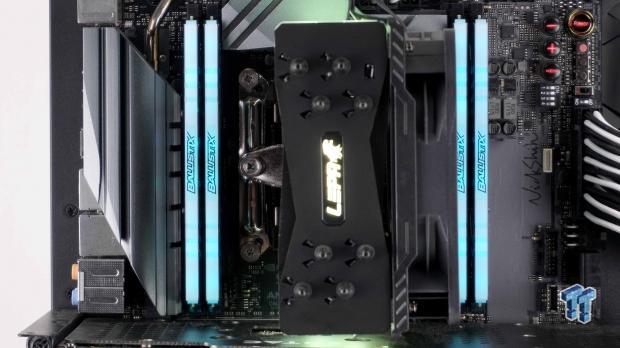 The Crucial MOD software will allow you to monitor temperatures and look at the SPD data which other software could not read, but the best thing about it is the ability to change the RGB LEDs inside of the sticks. In the image below, you can program each stick individually, or as a group, there are eleven ways to display colors, and even options to pick the colors in specific modes. Make sure to save the settings when you are done, and enjoy what Crucial and the Ballistix Tactical Tracers have to offer. 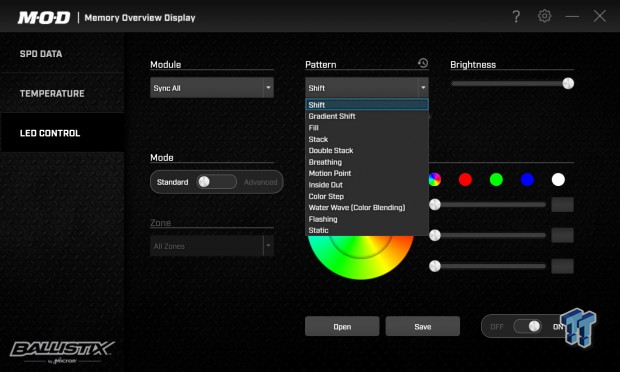 In our opinion, there is no reason one should pass up the Ballistix Tactical Tracer RGB memory. It performs as it should, it uses low volts to do so, the timings are decent, the aesthetics are fantastic, and you can customize them with 3D printed parts. We also like that with a slight bump to the voltages, we can lower the timings to gain a slight edge, or increase the speed with XMP timings, and gain all sorts of time back in the day when it comes to productivity. The only real downfall is the hugely inflated pricing of DDR4 right now, and to obtain what we have tested today, it will set you back $393. That is a tough pill to swallow, and if not for that, we would be all over a full recommendation. As of now, we would suggest you play the waiting game, and hope that pricing comes down to more reasonable and acceptable levels for the average person's bank account.

The Bottom Line: They are expensive, and that is the only reason we would wait. If you want sleek looking sticks with RGB lighting and the option to 3D print tops for them, your options are limited. Everything else about the Tracers is on point, and Crucial delivers what we expected to see!