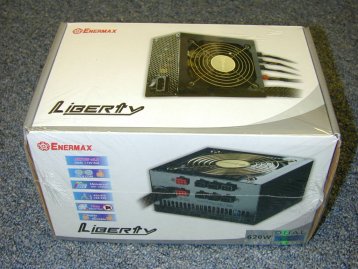 One of the company's latest offerings is the Liberty series power supply, which is what we'll be taking a look at today. With a power rating listed at 620 watts, it should be able to handle anything that we can throw at it, but we'll go at it like normal and see if this is fact or fiction. After all, an excellent reputation is a good thing for a manufacturer, but we still need to see if this new model has what it takes to live up to it.

So kick back for a little bit as we delve into the newest PSU to wear the Enermax moniker, the Liberty EL620AWT. 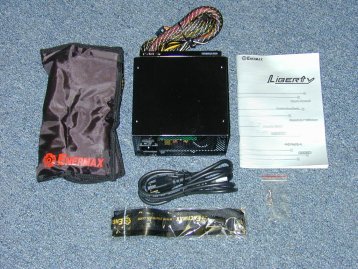 After you remove the plastic wrapping and open the box, you'll be greeted with the power supply, a power cord, a manual, mounting screws, a promotional lanyard with the Enermax logo, and a nylon pouch bulging with ... well, we'll get to that in a bit. 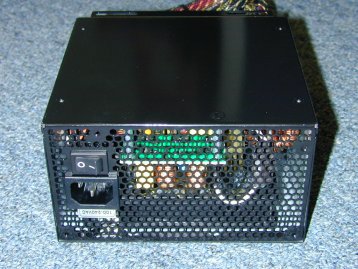 The Liberty 620 has a design that we've seen before on Enermax units. It uses a single 120mm fan on the bottom with a simple mesh design exterior panel to get rid of unwanted heat. On this panel you have only a plug for the power cable and an On/Off rocker switch. It lacks the voltage switch between 115v and 230v since this model automatically handles the chore of figuring out which type current you are using. Just a little feature that can keep you from trashing the unit from the beginning by not paying attention to this little switch.

As far as power is concerned, the Liberty model being tested offers up a dual 12v rail like we've seen before. Each of the rails can handle a maximum of 22A of power draw, but both combined max out at 36A. This is still a good deal of power. Many I've seen have a difficult time offering up even 30A of power along the 12v rail. To round out the abilities of this PSU, the 5v rail can handle a draw of 32A and the 3.3v rail can handle 28A.

Like past Enermax power supplies we've seen in the past, the 620 watt rating is what the unit is rated at on a constant basis. This opens up a huge number of windows for your system, regardless if you want dual PCI-E graphics, a water cooler that runs off the PSU, or even a massive number of fans with lighting. The Liberty 620 has what it takes to handle the load you throw at it. In the event you peak out at a higher level somehow, this particular model has a peak load of 680 watts. 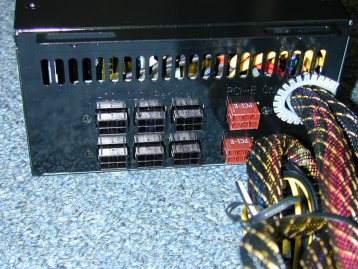 A quick look at the business end of the power supply shows a nice modular design. This is a nice feature that is beginning to show prominence since it allows you to keep cable clutter to a minimum. You only attach the cables that are needed for your particular system and leave the others stored away. It sure does make it easier when it comes to wrapping up the extra cabling so you can keep it out of the way of your airflow.

You'll also be able to see that the primary power coupler coming from the back of the unit is protected by a plastic guard that keeps the wiring from rubbing the metal of the housing, possibly causing a short of the system. It is also wrapped to aid in clutter.

As far as the ports, you have more than you do cables, so you have room to grow with your system. It also has the ability to handle two PCI-E devices, but I guess we can cover that when we take a look at the cabling harnesses. Hmmm ... looks like I may have given away what was in that nylon pouch, huh? 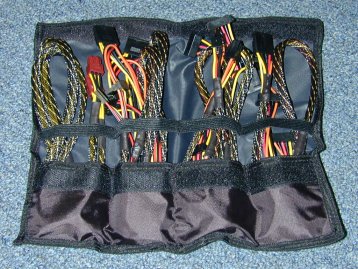 Yes, you guessed right, that bulging nylon pouch is for conveniently carrying the modular cabling used for the power supply. Lets get them out of the packaging, though, so we can see what we have to work with. 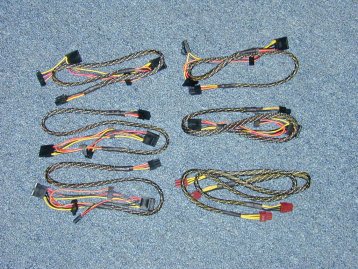 There certainly are a bunch of these things. To total up the possibilities, we have ten 4-pin Molex, ten SATA, one FDD, and two PCI-E. This is a huge boost when compared to most other power supplies on the market! And remember, if you don't need that many power connections, just leave the extra cabling harnesses in the pouch and store it away. That way it will be handy when you upgrade next. 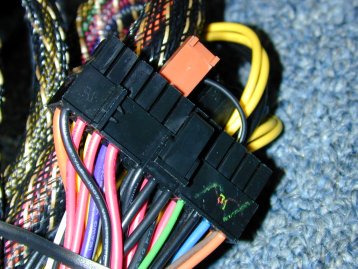 For those concerned with the main power coupler, fear not. The type connection used on this Liberty model can handle either a 20-pin or 24-pin motherboard with ease. The shot above shows the extra 4 pins that can be removed on the left. This will help this power supply grow with your system.

As a side note, the 4-pin auxiliary power connection is actually a 4+4 design that handles newer technologies hitting the market. The Liberty power supply is compatible with ATX, BTX, CEB and EEB system boards, so you're set for either home or server use. 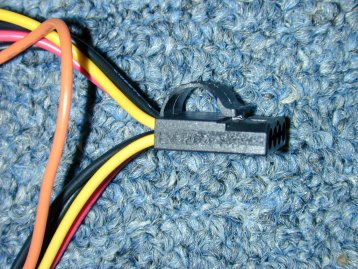 Finally, I'd like to bring your attention to the Molex connectors used on this PSU. While it may seem simple, that curved plastic tab makes removing the connector from a device an easy task. I can think of a lot of times when I'm trying to remove a Molex and the thing is very difficult to get out. I never want to put too much pressure on it because I can just see myself pulling out the power port from the device I'm working with. This little tab allows you to just squeeze down on the top of the Molex and loosen the connector from the device, making it easier and safer to remove the power. Very nice addition here.

When it comes to testing a power supply, there are a lot of choices in how to tackle the job. I have found that while a multimeter can give scads of data, most of us don't have a clue what all these facts and figures mean. Even the elite of the enthusiast crowd doesn't always keep up with the inner workings of a power supply. So what do we do?

Since a majority of our readers tend to fall into the enthusiast realm, why not run the power supply in an AthlonFX based system and then stress it out? We'll begin by starting up a burning session on the CD-RW then go ahead and minimize that. Now if we crank up a long-winded demo of Quake 4, we will have strong power draws coming from the hard drive, memory, graphics and the optical device. Now granted, most of us aren't going to be doing these tasks together, but if our test model can manage to produce good numbers under these situations, it will handle our normal daily chores with ease. Oh, and to make sure that the 12v rail is being properly utilized I'm going to have the power supply hooked up to four fans to provide a constant draw from this source.

Nice numbers as a rule here. The 12v rail is pumping above and beyond it's rating and was as steady as a rock. There was absolutely no fluctuation is voltage on this rail. The 5v rail also put out numbers a little over the stated rating and was nearly steady. It would, however, toss back between 5.13v and 5.14v, but nothing out of the ordinary so I'm not worried here. The 3.3v rail is suffering a little bit, but there were no stability issues.

Oh, and just for grins I decided to add some other power drains on the PSU from another system. After all, they didn't just give me 10 Molex for fun, did they? To make a long story short, the numbers above were still holding steady with no drops in any of the voltage rails. This makes a statement for the Enermax product line.

After we finish our testing and take a look at the numbers, we end up with a power supply that has what it takes to tackle the job of an enthusiast system. No matter what I threw at it, the Liberty 620 was there to do the job at hand. With a product like this, it is easy to see why the name Enermax is so highly revered in the power supply market.

While not as feature-rich as some other models on the market, this isn't the main goal of the Liberty line. The main function of this model is to provide an easy to use unit with enough power for the enthusiast. This seems to be a simple plan of attack, but it has failed in many other company's products.

As far as price is concerned, you're going to be talking about $170US for the Liberty 620. While not the cheapest on the market, it does fit into the higher echelon of the pricing scales, but then the Enermax line has been in this realm for as long as I can remember. What it comes down to is are you going to pay for one of the best power supplies on the market or are you willing to take a chance of the power supply you spent a little less on failing.

Bottom line... If you're looking for a high-end power supply that not only performs like a champ but also has the ability to grow with your system, then you have found that PSU. With a simple layout, modular cabling and one of the most steady power levels that I've seen to date, we have a sure winner on our hands.

Rating - 9 out of 10 and TweakTown's "MUST HAVE" Best Performance Award!