The eGFX Puck is the way to go for those wanting a turn-key solution to Thunderbolt 3 GFX on their mac or Windows PC.

The eGPU market exploded with the introduction of Thunderbolt 3. I have used a number of solutions both with my XPS 13 and Alienware 15 notebooks along with testing done via the ThunderboltEX3 AIC with our desktop test platform. In the past eGPU platforms consisted of a rather large enclosure hovering around the size an ITX chassis, paired with an SFX power supply and Thunderbolt 3 to PCIe interface. This platform is very customizable with many vendors having a solution to fit your needs with that added bonus that you can choose any PCIe GPU you want and install it. 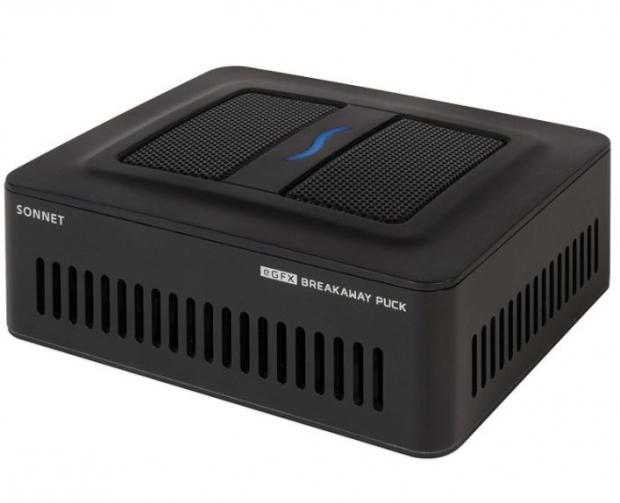 Sonnet too has a traditional eGPU solution with its eGFX Breakaway Box but along with that have decided to take things a step further introducing the eGFX Breakaway Puck lineup. This gives Sonnet more control of the overall form factor along with the internal components to be used. In this portfolio, Sonnet has introduced a few models to start with and those include a Radeon RX560 and RX570 solution.

Getting into the details, the Sonnet eGFX Breakaway Puck is a small form factor eGPU solution built around both Thunderbolt 3 and the MXM form factor. Each of the two models includes 4GB of GDDR5 support for DisplayPort 1.4 and HDMI 2.0. Additional technologies include Freesync and Eyefinity support along with DX12, OpenCL 2 and OpenGL 4.5.

Compatibility is a little tricky with the RX560 model supporting Windows 10 x64 Build 1703 and later while the RX570 model we have in-house for testing supports Windows 10 x64 Build 1703+ and macOS 10.13.4+. Both solutions require a Thunderbolt 3 port and it is advisable to make sure you are using a 40Gbps capable solution to get the most performance.

MSRP of the Sonnet eGFX Breakaway Puck RX570 comes in at $599.99 with a one-year warranty. 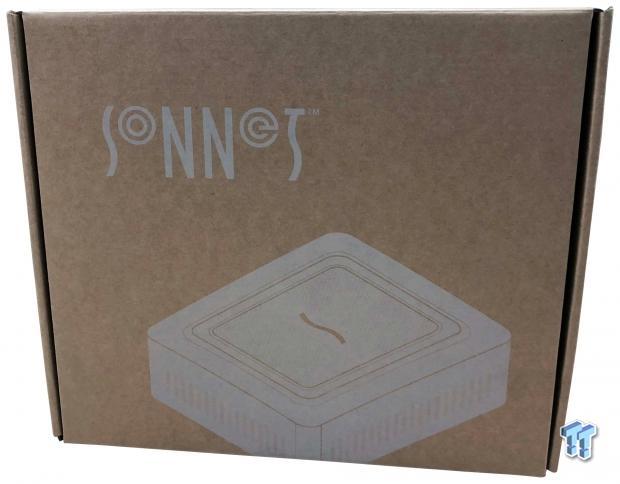 Packaging for the puck is quite simple with Sonnet branding and shadow of the puck on the front. 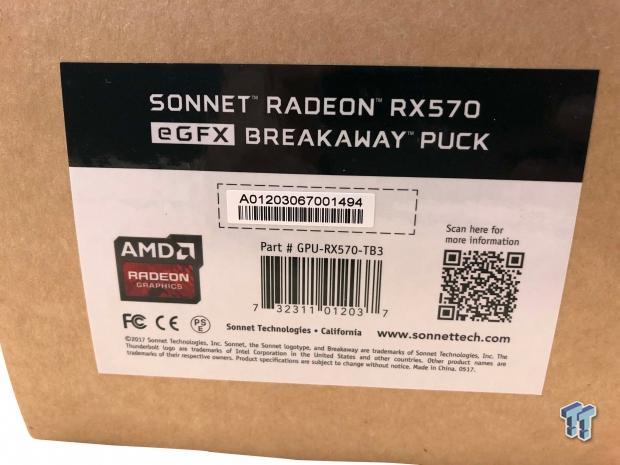 The side offers a full-color sticker letting you know the model included in the box. 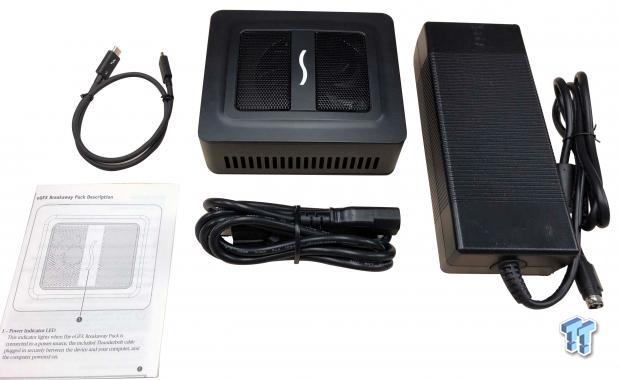 Spreading out everything on our bench, we have reading materials, Thunderbolt 3 cable and the Puck itself and to the right the power brick. 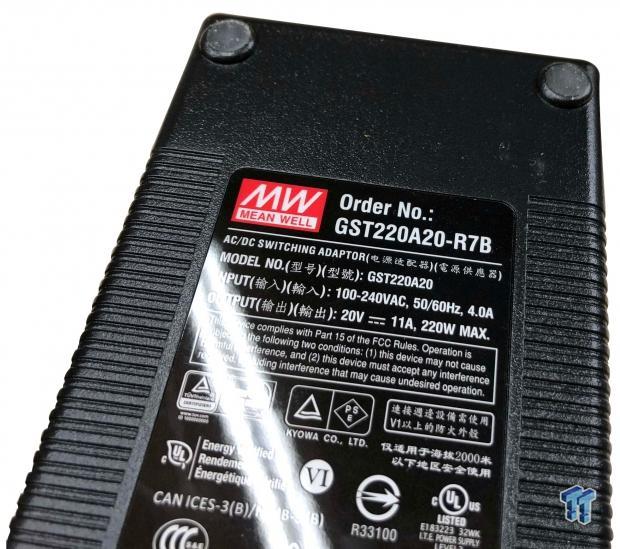 While we have everything here, the RX570 model uses a Meanwell 220W power brick offering 20v at 11a. 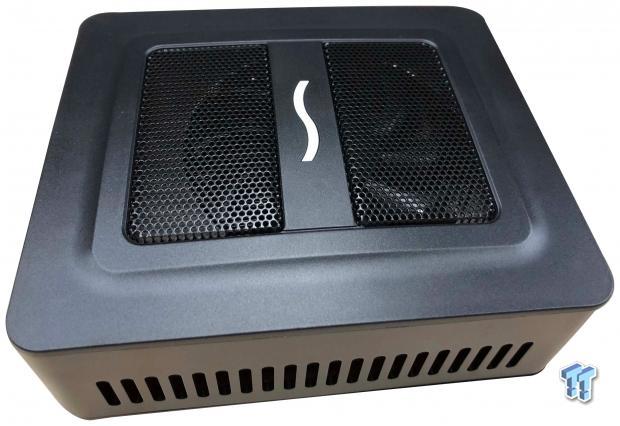 On to the puck. As you can see, the top is entirely vented with room for branding. The front edge and side are also vented to allow air to escape.

On the backside edge, we have three DP 1.4 ports next to the HDMI 2.0 and Thunderbolt 3. To the right, we have the 4pin DIN connection for power input. 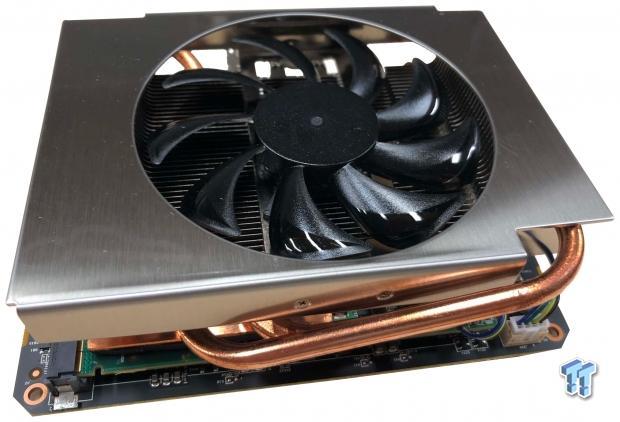 I decided to take things further with this unit to see what components were used in making the puck. Seen above, we have what looks like an ITX heat-pipe cooler for the GPU, and a large fan for moving air. 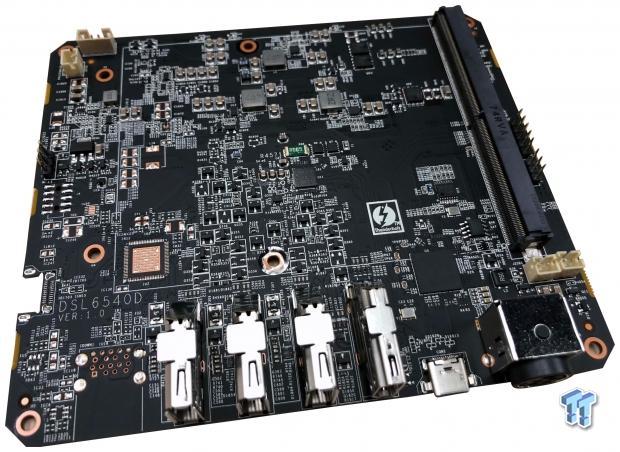 Removing the GPU from the Thunderbolt 3 PCB, we have the MXM slot to the right with all of the display outputs below. The Thunderbolt 3 IC sits right below the logo on the PCB, in this case an Intel 6540 40Gbps controller. 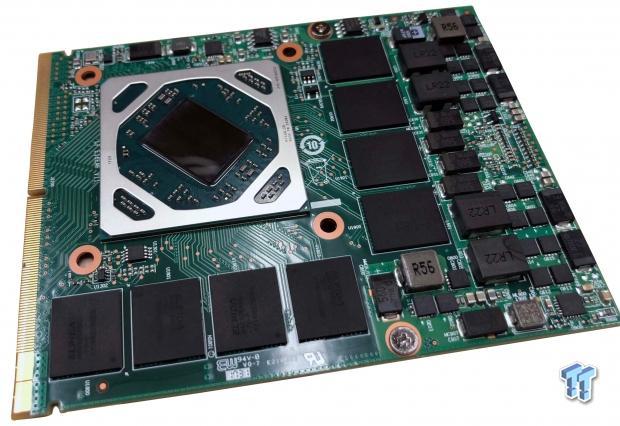 Last, we have the RX570 MXM GPU itself. Elpida GDDR5 surrounding the GPU and all power circuitry to the right. 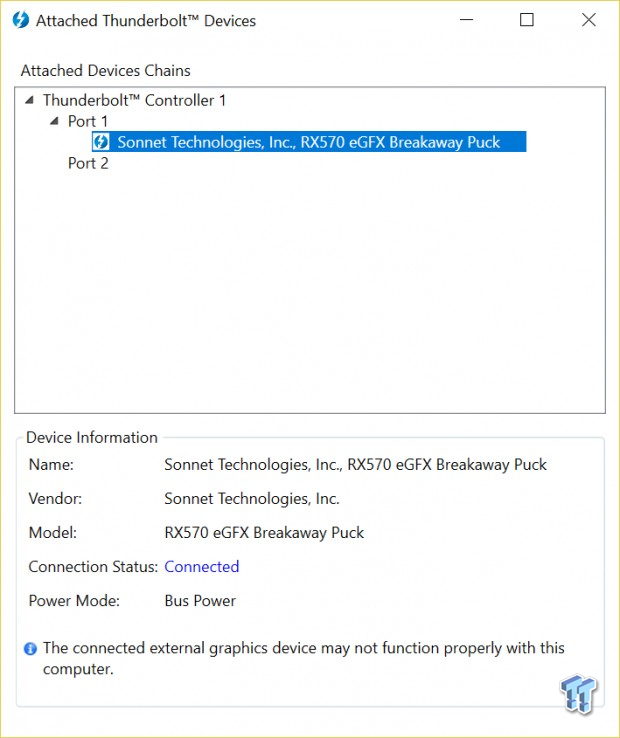 We used our Windows desktop platform to test the Sonnet. Once connected, the Thunderbolt 3 software should alert you to its connection as seen above. 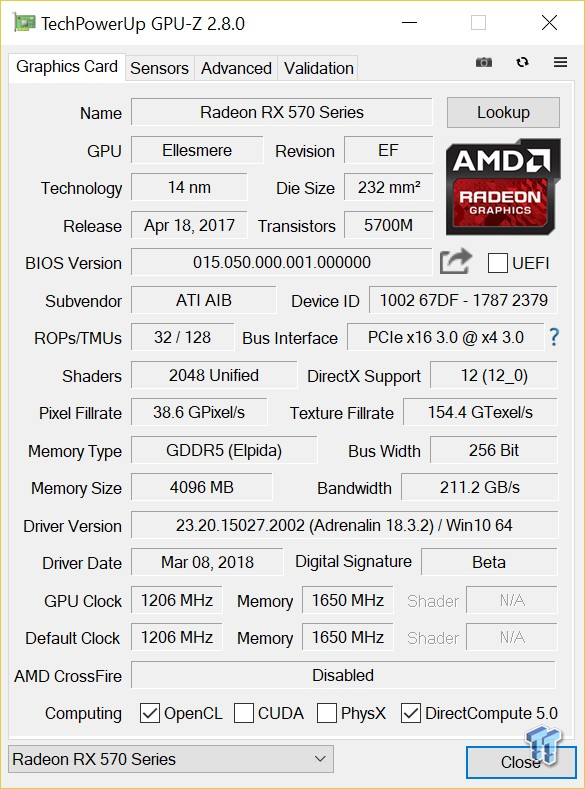 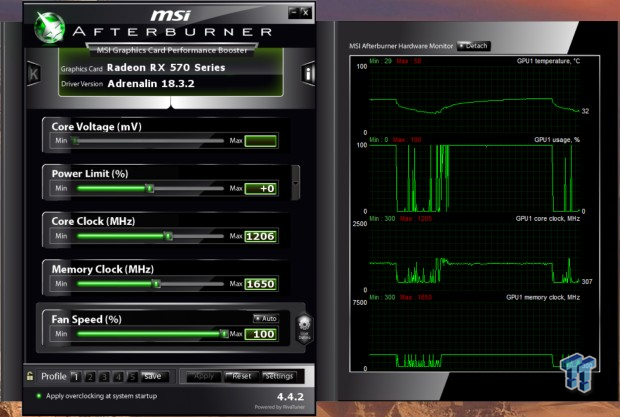 Surprisingly, MSI Afterburner did give us control of overclocking on the eGFX Puck but we didn't push the card at all before testing. 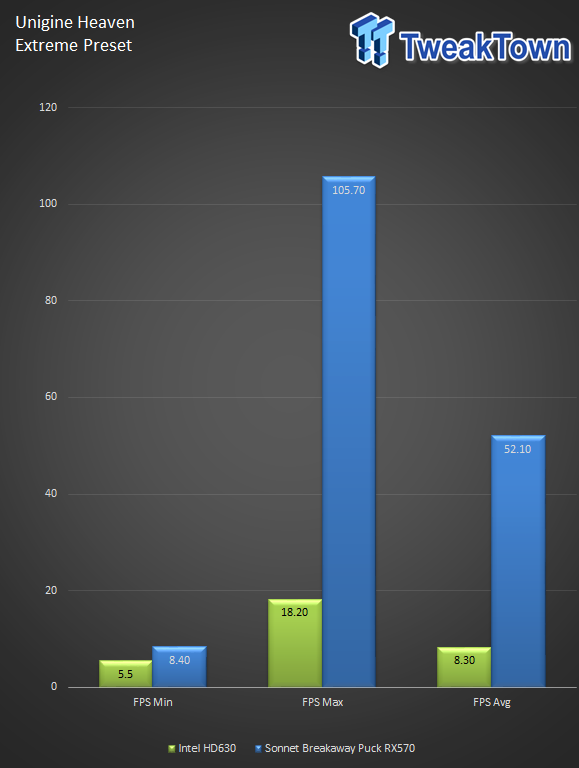 Starting off testing this is a comparison between typical notebook graphics in the Intel HD630 commonly found on Kaby Lake and Coffee Lake CPUs and the Sonnet eGFX RX570 over a 40Gbps Thunderbolt 3 interface. Out first test scenario was Unigine Heaven and the Extreme Preset. As seen in the chart, the Sonnet peaked at 105fps compared to the 18fps peak of the Intel solution. Average fps came in at 52 for the Sonnet eGFX and 8 for the HD630. 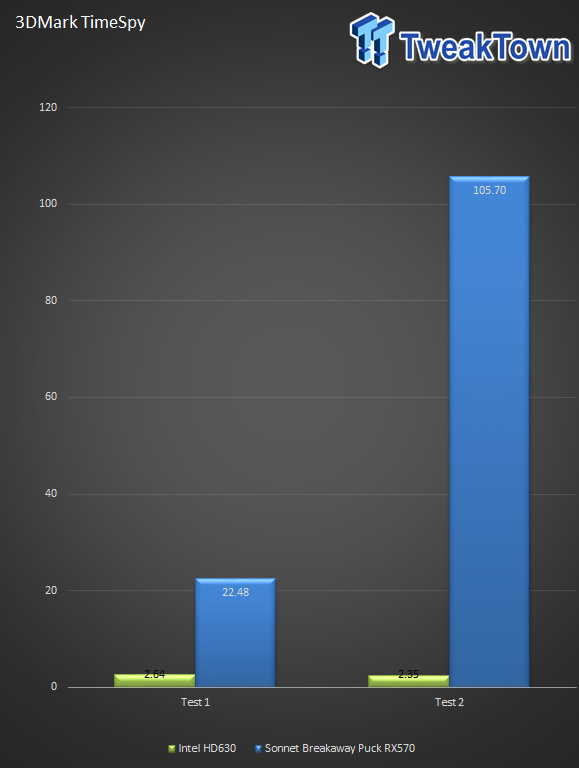 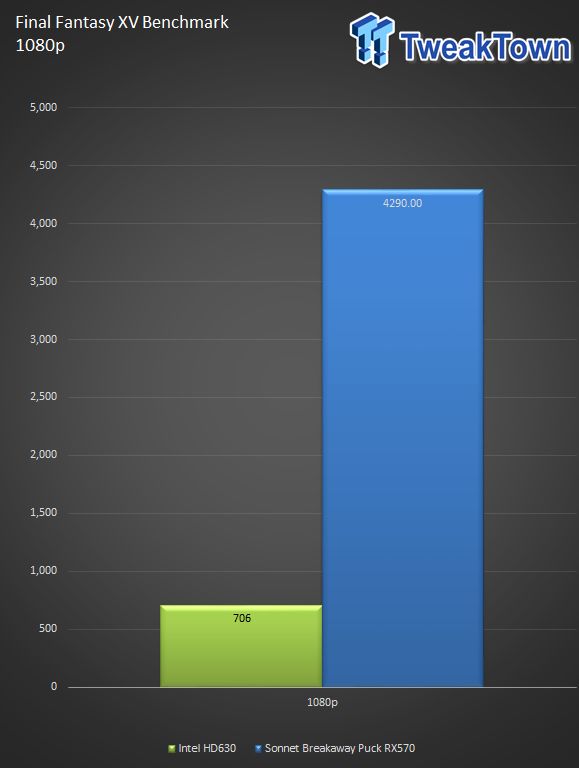 The last game test was the Final Fantasy XV benchmark at 1080p. That said the Intel HD630 came in with a score of 706 while the Sonnet topped 4200. 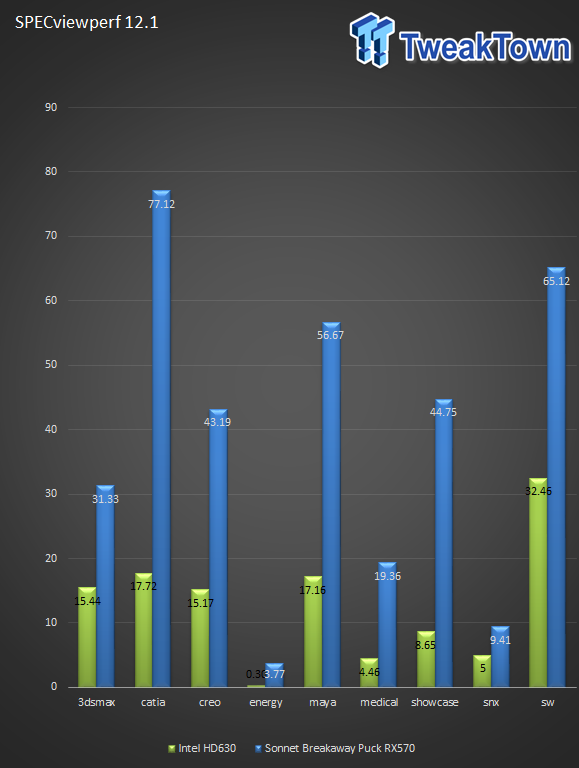 For those of you that run graphics accelerated workloads, I ran both solutions through SPECviewperf 12.1 with the above results. The Sonnet eGFX was able to at least double all of the performance results of the Intel HD630 and at times triple them as was the case in Maya, medical and showcase.

Closing out this review, Sonnet certainly has something going for them in this eGPU market space. The Breakaway Puck is by far my preferred method of connecting an eGPU but that being said I did find a few faults with the unit. First is, the RX570 is a hot beast and second to control that heat I had to use MSI afterburner to control of the fan speed, which made it louder and last as every Radeon card I've ever owned, the RX570 uses pigs to power it as it has terrible coil whine.

That being said, the build quality of the enclosure is quite good. Sonnet did everything they could to allow as much air pass through as possible while staying modern in the design. I had no issues connecting my LG Ultrawide freesync panel to DP and a second 4K monitor to the HDMI 2.0. As far as Thunderbolt 3 set up goes, things are a bit trickier there, as not all Thunderbolt 3 solutions are ready for an eGPU but that isn't really a knock-on Sonnet.

The performance was fantastic, even though we are certainly leaving some performance behind with the Thunderbolt 3 interface, the RX570 was able to reach a solid 105fps in Unigine Heaven and 3DMark Timespy. Moving to FF15, the RX570 was 6x quicker than the onboard HD 630 reaching a score of 4290 and last, we had SPECviewperf 12.1 put the wraps on testing with the RX570 adding an overall 4x performance increase to our test system.

With all of that, the $599 price tag seems a bit steep just looking at it, but if we take into consideration many Thunderbolt 3 eGPU enclosures command an average price of $250 and we add in the market price of the RX570 around $339 as of writing this, things even out either way you decide to go.

The Bottom Line: The eGFX Puck is the way to go for those wanting a turn-key solution to Thunderbolt 3 GFX on their mac or Windows PC.