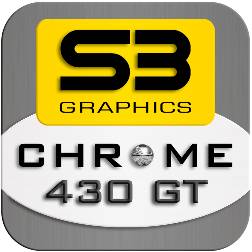 While I've heard of S3 Graphics in the past, I really don't know a lot about the company. Still being quite a young lad back in the mid 90s when S3 was ruling supreme, I was just at school and accepting hand me down computers from my dad.

Reading through the reviewers guide that was sent, a lot of familiar names did pop up; models like Trio, ViRGE and Savage were all terms I heard mentioned previously. In 1996 S3 owned over 50% of the 3D graphics market share. The thing is, looking over the guide it's quite depressing on a whole to see a company that dealt with some of the biggest names in the game and have some of the most power 3D graphics cards on the market to now be something that people only remember as a distant memory.

S3 hasn't stopped releasing graphics cards, but we just don't seem to hear much about them anymore. Hopefully that's going to change with the release of the Chrome 430 GT.

It's a low-end card that seems to be capable of taking on the big boys at NVIDIA and AMD.

As you would expect for a low-end card, there isn't a whole lot to any of it. The box is small and just gives us a bunch of logos across the bottom, a picture of the card chromed along with some of the main benefits of the card. 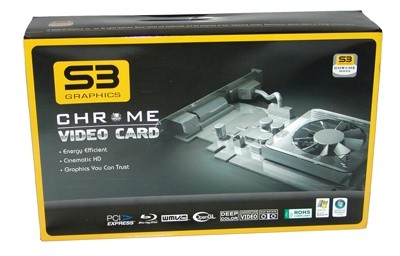 Turning the box over we go into some more detail on what the card can offer along with a 3DMark06 compare against what its main competition, the NVIDIA 8400 GS and Radeon HD 3450. We also see a star like system which NVIDIA uses to give you an idea on who the card is designed for. 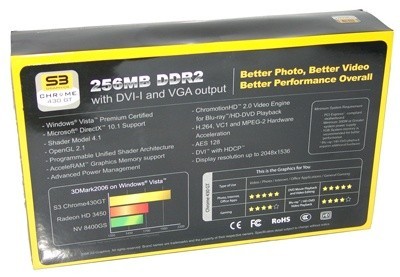 Moving inside the box there isn't a whole lot in the extras department; we have a driver CD, warranty card and DVI to VGA connector. 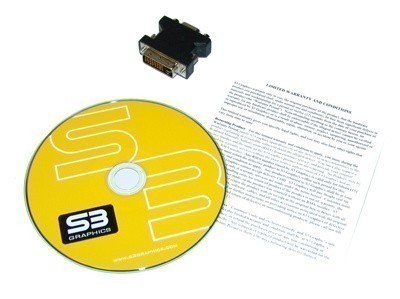 With the package out the way it's time to move onto the card itself; it doesn't come as any real surprise that there isn't a whole lot to it. The card is only slightly longer than the PCI Express connector and uses active cooling. The card is also of the low profile status. 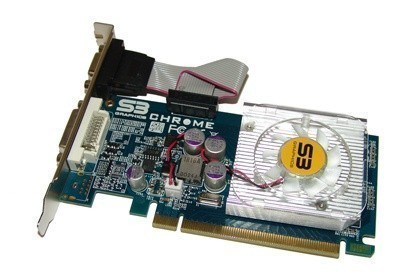 The I/O side of things is also pretty plain with just a DVI and VGA connector. We don't have any TV-Out connector.

The card isn't exactly a beast in the specs department, but we will see how it goes against the low-end cards from NVIDIA and AMD.


What we've done today is compare the S3 Chrome 430 GT against the HD 3450 and 8400 GS. We haven't actually included our normal Windows XP testing in a separate section; instead we've just included it in our normal graphs so we can see the performance difference between the 430 GT under XP and Vista.

Since we're not too sure what the deal is with the drivers from S3, we thought this was a good chance to have a look and see where more performance is coming from.

As the back of the box showed, the 430 GT is the fastest card under 3DMark06. Vista performance is also slightly better than XP.

Using the latest Direct X 10 technology PT Boats - Knights of the Sea manages to apply a lot of stress to the components of today which in turn gives us quite an intensive benchmark.

Moving to the DX10 based PT Boats and we can see that the more established offerings from NVIDIA and AMD come out ahead in this case.

OpenGL CINEBENCH testing saw the 430 GT come out ahead by quite a decent margin against the AMD and NVIDIA offerings. We can see that the difference between Vista and XP is very small.

Moving to another real world game we see the 430 GT does lag at the back of the pack again, especially when we check out the averages. We also see that the performance between Vista and XP on the 430 GT is quite similar, with XP just trailing.

The intensive Crysis sees the AMD and S3 offering sit quite close together with the 8400GS just coming out ahead.

Here we can see that moving to Direct X 10 under Vista slows the card down slightly compared to its XP results. We also again see the card trailing behind the more established HD 3450 and 8400 GS.

With the 430 GT being the only card with active cooling, it comes as no surprise that the temperature is the lowest on it.

Noise levels on the card are pretty standard, sitting around the mid 60dB range.

The Chrome 430 GT isn't too bad of a card, it's able to perform similar to the AMD and NVIDIA based games in some applications, and never really falls behind too much. The card is also cheaper than those two offerings; if that represents better value for money though, it's really up to you. Some people would prefer to pay slightly more and get slightly more performance.

On the downside, there are so many issues with the S3 Chrome 430 GT which don't relate to the card itself. The card on a whole is very good; it never missed a beat in our testing, had no issues with driver installation and just on a whole was a pleasure to deal with.

Where the problems lie is in reference to the driver support. How often are we going to get driver updates from the company? Getting a hold of the card might also be a problem as availability seems low. What is after-sales support going to be like? The guys at S3 have been fantastic about answering any questions we've had and they generally seem pretty enthusiastic about the product, but with the competition that is the VGA market who really knows how well they will go, it's not the first time that the best product hasn't come out on top.

Another cool feature of the card is that we have hardware decoding, which is great for people with low-end HTPCs that want to get their Blu-ray freak on. The thing is, this is where I really do begin to have some issues with the card.

What I would probably do is release a S3 Chrome 430 GT HD. What this card would consist of is passive cooling, low profile bracket, onboard HDMI w/ ability to transfer sound and a HDMI cable. No doubt that this is going to increase the price, we don't expect these extras to happen without a price increase, but S3 really need to stand out from the pack and offer something we don't have from other partners.

Who knows if S3 will ever become as big as they were in the mid 90s or if they will just continue to plod along creating low-end graphics cards that the market will probably never really up take.