Throughout my time with TweakTown, I've been pushing the amount of pixels that video cards can produce to their limits. I've done plenty of multi-monitor content in my years as a technology and hardware enthusiast, but now that I've moved into my new office, I'm going to be kicking things up a notch or six.

I now have the space to permanently set up a triple-monitor setup, where I've got three Acer XB280HK monitors setup in landscape mode. 3 x 4K monitors in landscape provides an insane resolution of 11,520 x 2160, or you can take it in the portrait mode which results in a resolution of 6480 x 3840. Personally, I prefer multi-monitor setups in portrait, as you can't get the fish eye lens warping that the landscape setup experiences.

I thought I would redo all of our multi-monitor content now that we're on a new PC powered by an Intel Core i7-5960X and ASUS Rampage V Extreme motherboard. Not only that, but we've shifted all of our video card and monitor-related content to Windows 10, which is something that I thought was worth re-testing our GPUs on a multi-monitor setup.

One of the big things we'll be doing in 2016 is not just testing the ultra ridiculous triple 4K resolution, but triple 1080p and triple 1440p setups. This way we'll be able to test all three multi-monitor setups, providing results and showing you just how these GPUs work in triple 1080p/1440p/4K. 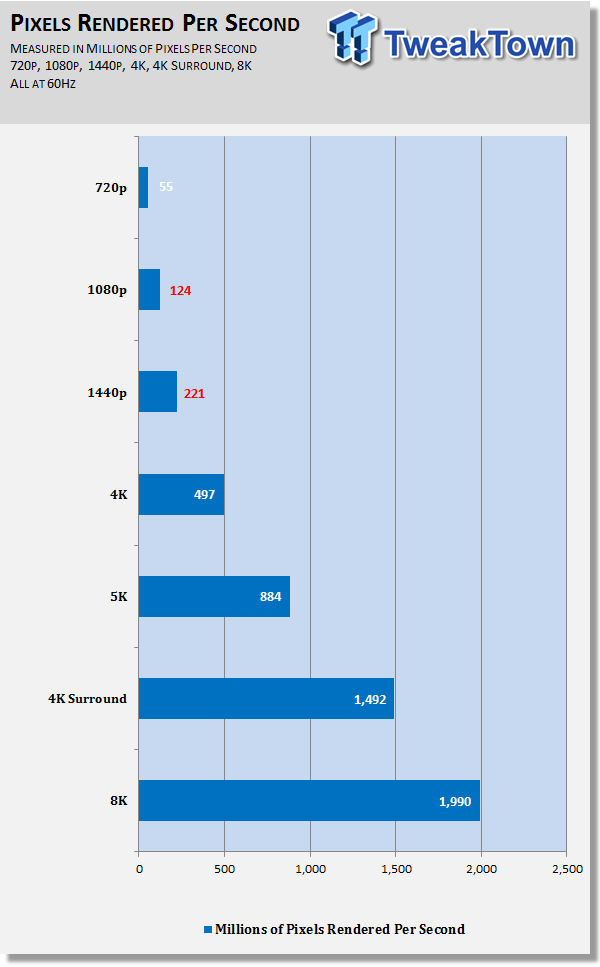 Here's what our VGA benchmarking PC consists of now:

For our video card reviews, we benchmark games with built-in benchmarks so that people can run the same benchmarks we do at home, without issues. We also run Battlefield 4 thanks to the Frostbite 3 engine being one of the most gorgeous on the market, powering games like Star Wars Battlefront and Mirror's Edge Catalyst.

We also run Unigine Heaven for the synthetic side of things, but drop 3DMark (which is something we benchmark on our video card reviews).

What we're looking for is 60FPS average. We don't want anything under that, and while we understand 11,520 x 2160 isn't easy on any GPU setup, 60FPS is something I strive for in all gaming situations. This is why we are taking the time to run both Medium and Ultra presets, so that we can see how much more performance you can get from dropping down to Medium in-game settings.

It doesn't matter what hardware you throw at multi-monitor setups, it's never enough. We will be running both Medium and Ultra presets, so that we can see what type of improvement dropping down to Medium will provide. 11,520 x 2160 is insanely hard on GPUs, and because of the lack of multi-GPU support in games these days, you can't just throw more Radeon or GeForce GPUs into your system to increase the performance.

But, thanks to most games being made on consoles these days, the difference between Medium and Ultra presets in today's games really isn't all that different. The performance hit is considerable, but the difference to your eye is negligible. So I'm running the benchmarks twice, so you might actually be able to use lower-end GPUs to run a multi-monitor setup. 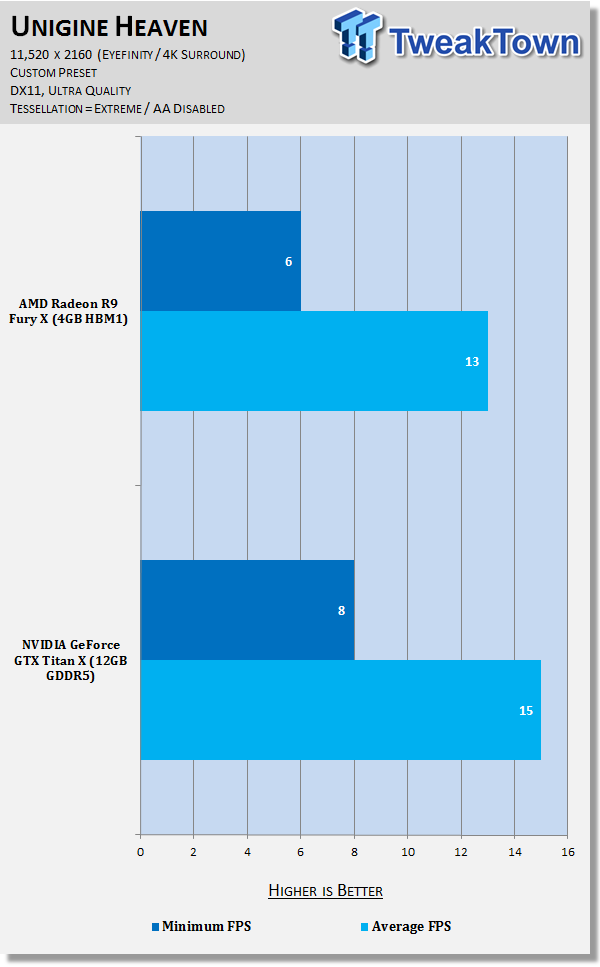 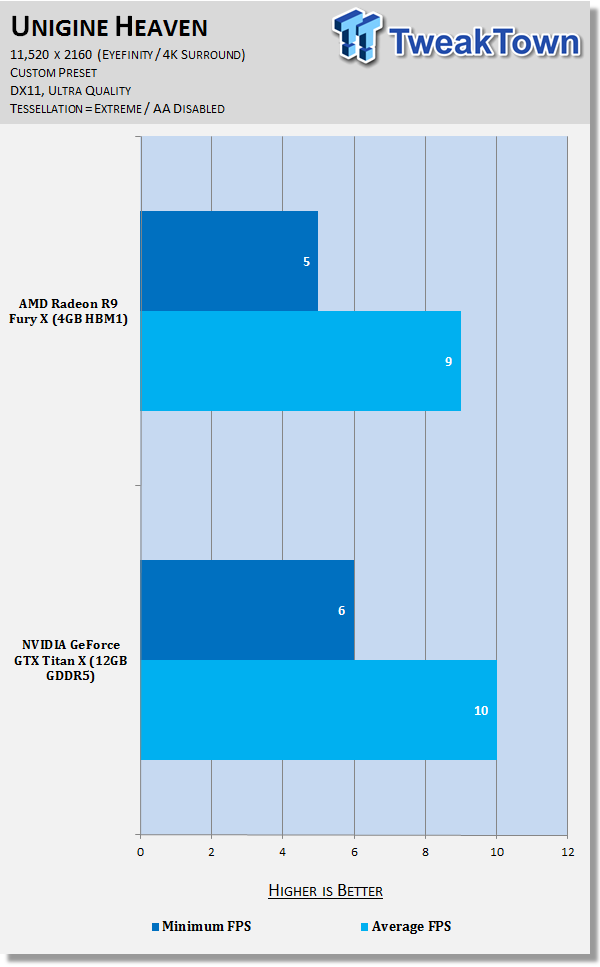 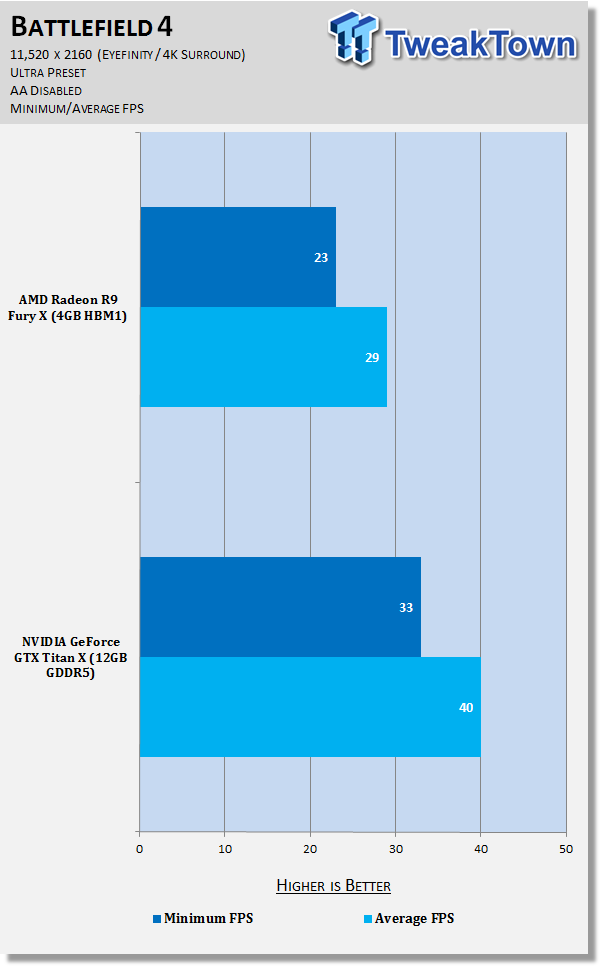 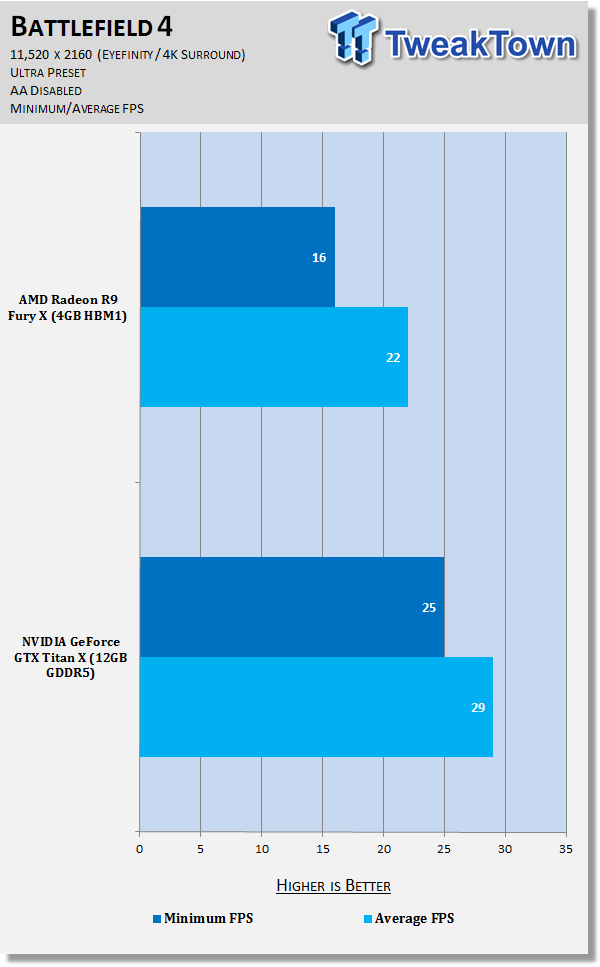 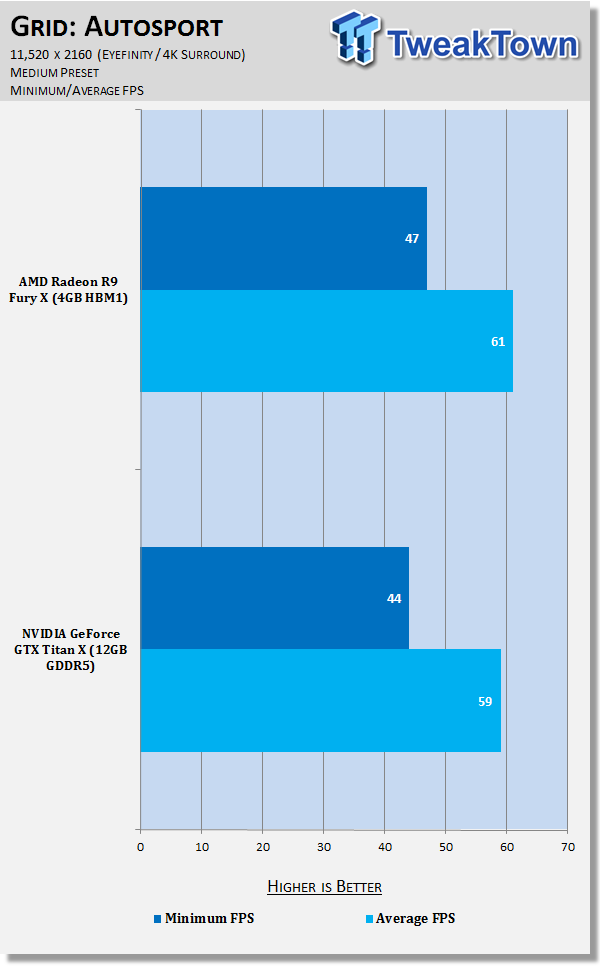 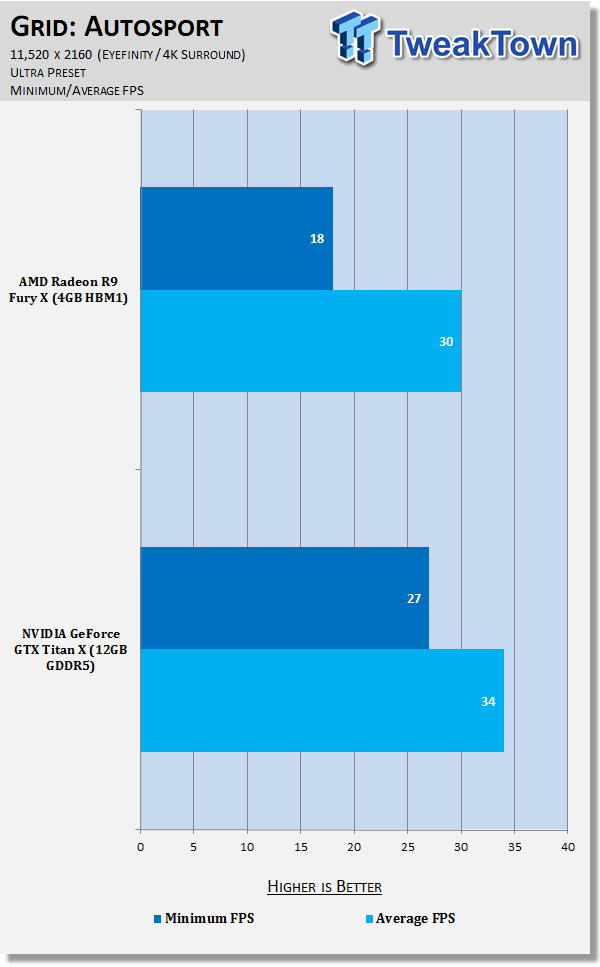 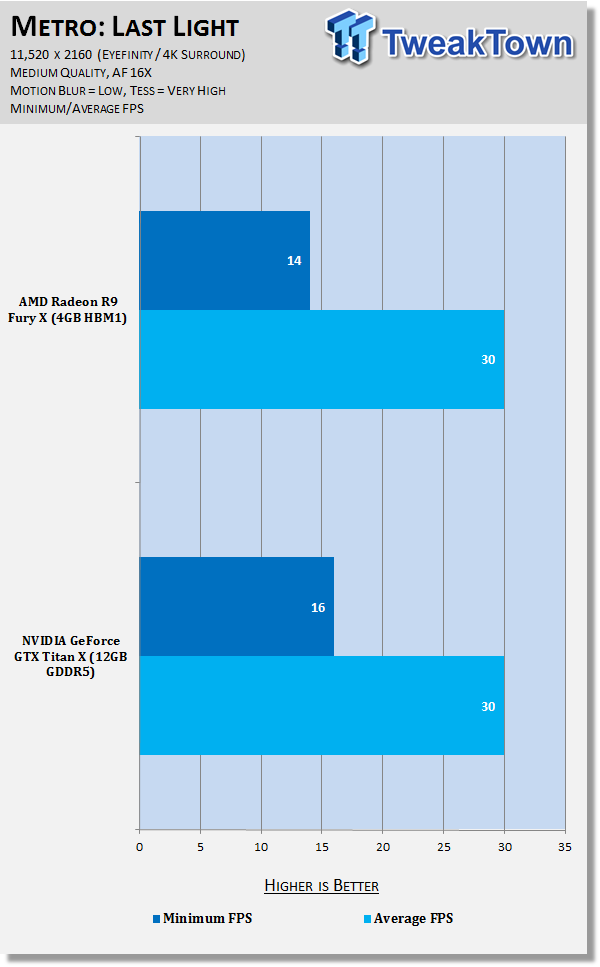 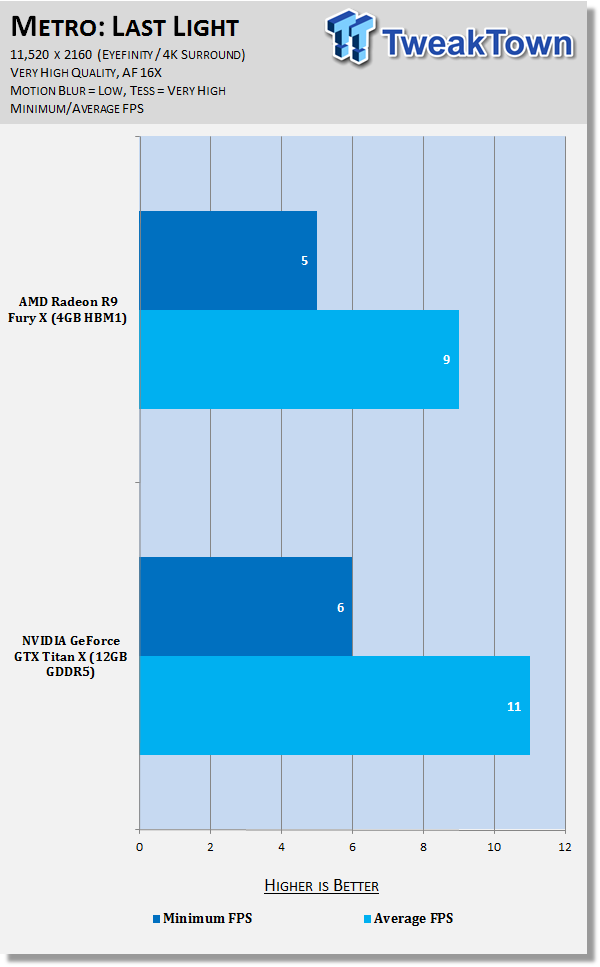 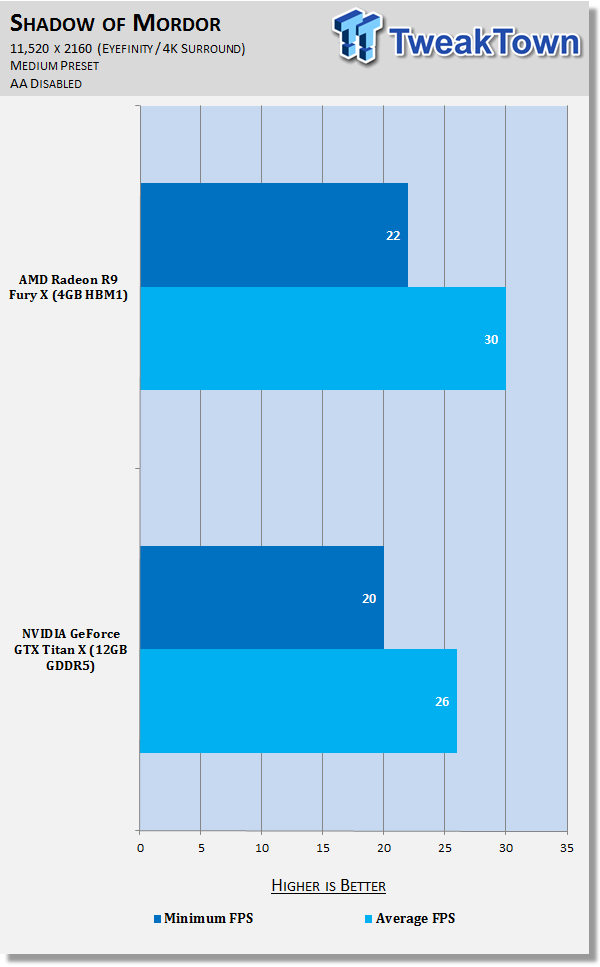 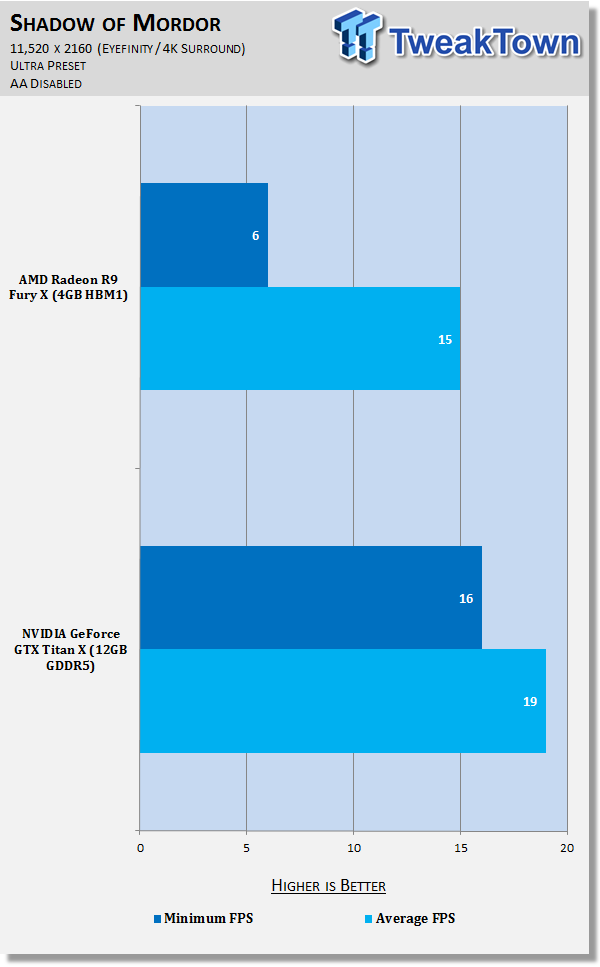 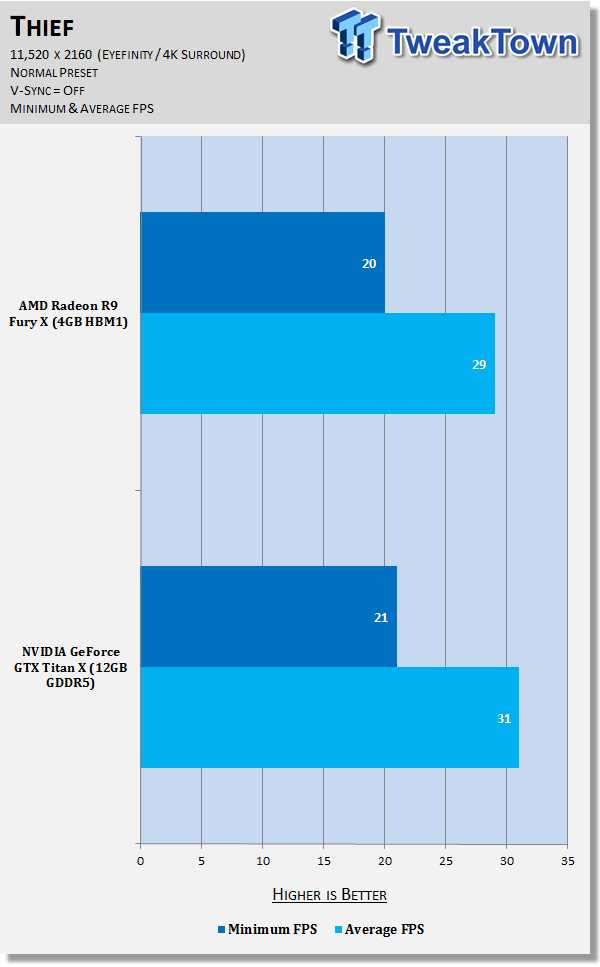 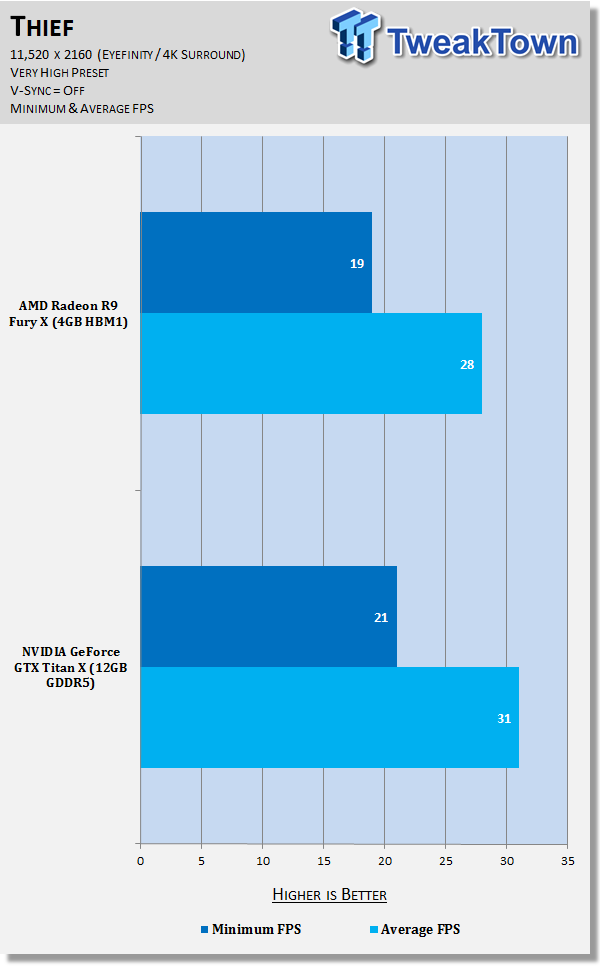 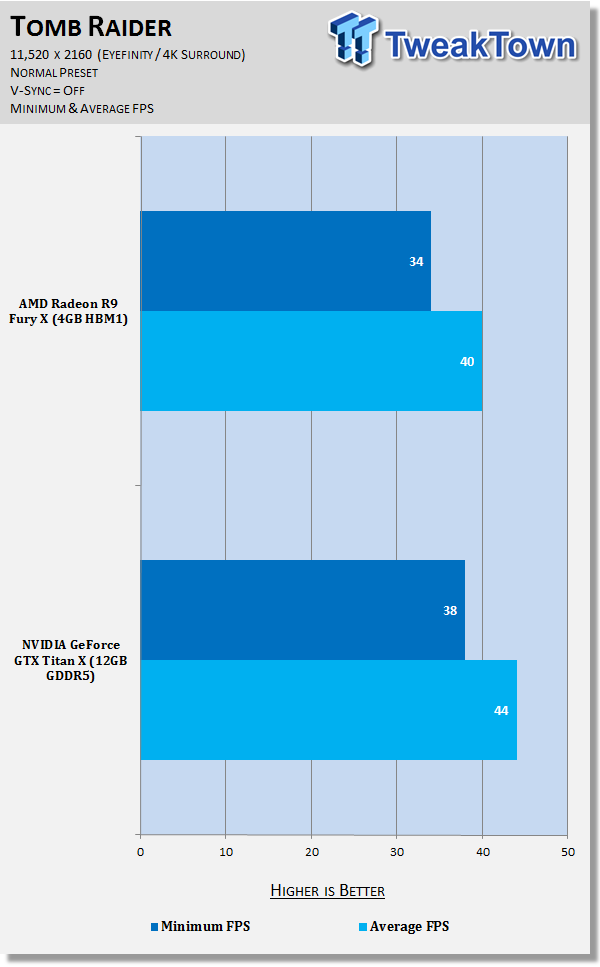 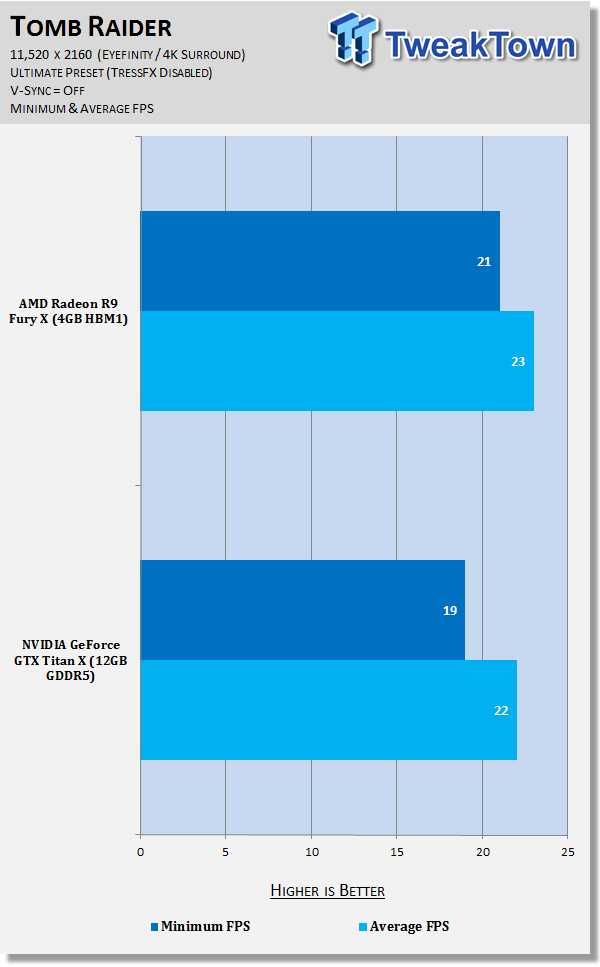 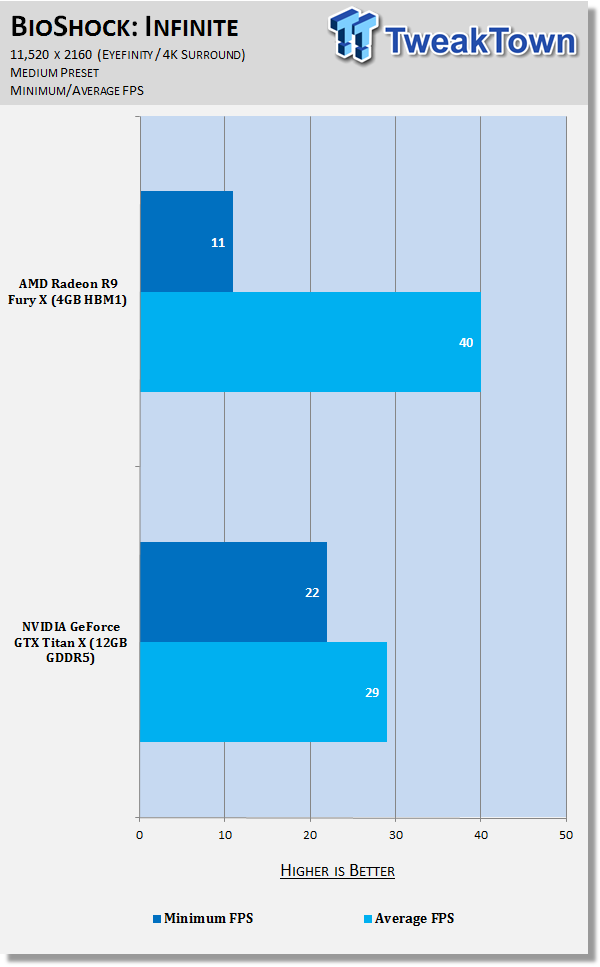 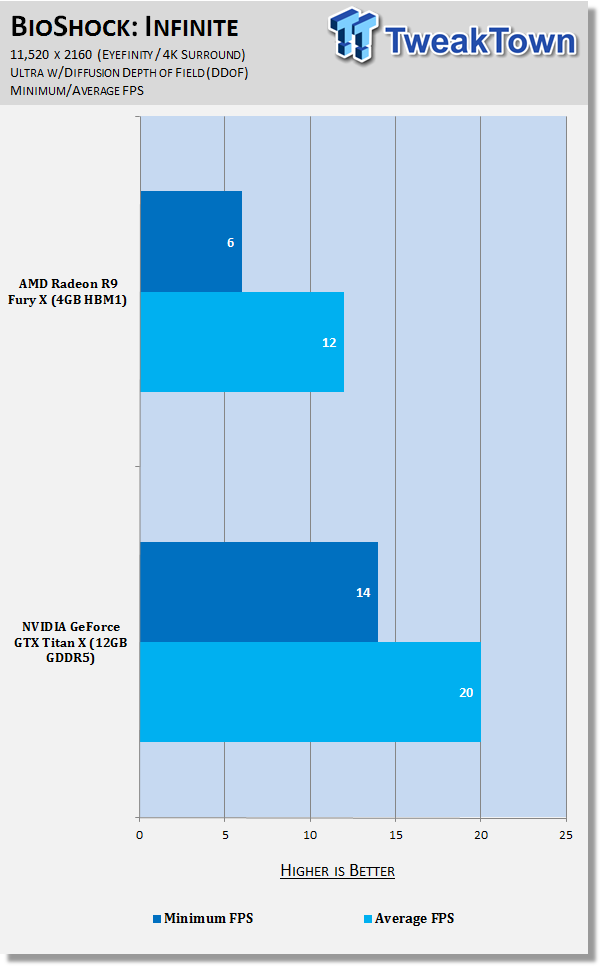 How Did We Go?

Since we tested our GPUs at 11,520 x 2160 in both the Medium and Ultra/Max presets, it'll give us a better look at what kind of performance we're going to get from the games we've tested. And whether it's worth cranking the detail knobs all the way to maximum, or not. We're looking at 30FPS at a bare minimum, but we're really aiming for 60FPS. We know we're not going to hit it - so we're going to need some multi-GPU goodness in the coming weeks.

Battlefield 4: On the Medium preset, the Titan X beats the Fury X by 38%, while on the Ultra preset the Titan X wins once again with 32% more performance than the HBM-based Fury X.

GRID: Autosport: The AMD Radeon R9 Fury X was faster than the NVIDIA GeForce GTX Titan X in GRID: Autosport on the Medium preset by 2FPS, with AMD beating NVIDIA by 3%. On the Ultra preset, things swing back for the Titan X, which beats the Fury X by 13%.

Shadow of Mordor: This is another tough game for GPUs, with the Fury X beating the Titan X by 4FPS - or 15%. Looking at the Ultra results, NVIDIA comes out on top with 19FPS compared to the Fury X with 15FPS - a difference of 27%.

Thief: Moving onto Thief, the R9 Fury X and Titan X are neck and neck - with AMD's card hitting 39FPS while NVIDIA enjoys 31FPS - a win for NVIDIA of 7%. On the Very High preset, the Fury X scores 28FPS average to the 31FPS average on the Titan X, with NVIDIA winning by 11%.

Well, is this what you expected? I did - and while I'm impressed, I'm so excited for when we can run 11,520 x 2160 on a single GPU at 60FPS+. Right now, even dialing down the detail to Medium, only a handful of our games were playable (60FPS+ constant is what you want, especially with multi-monitor setups thanks to the bezels).

I think the next-gen GPUs from NVIDIA and AMD are going to be capable of this, with the tease of NVIDIA's Pascal-powered GeForce GTX Titan X successor said to feature up to 32GB of HBM2, and deliver around 1.5-1.8x the performance of the Titan X. Now, that should be enough to hit 60FPS or so, but two of those in SLI are going to be something that dreams are made of. We should be able to hit 60FPS+ on Ultra/Max details at 11,520 x 2160 with next-gen Titan X in SLI.

Finally, gaming on the triple-monitor 11,520 x 2160 setup is awesome. Sure, the bezels are in your way, but the experience is just so great. The two additional monitors fill your entire peripheral vision, enveloping you and pulling you into the game. I wouldn't recommend it for fast-paced first-person shooters, but for everything else, it's an experience like no other.

Would I recommend it? Probably not. I do these articles to give us a closer look at where GPUs are going, and what we'll need regarding raw GPU performance once we bust through 4K @ 120 and VR headsets. Right now, we simply don't have the GPU power for anything over 4K @ 120Hz on a single card, but that's where Polaris and Pascal should turn up and blow us all away. Surprise me, AMD/NVIDIA.