Thanks in part to huge advances in computer graphics made in the late 1990's, the decade saw the return of the disaster epic popularized some two decades earlier, with audiences flocking to the likes of Independence Day, Twister and Armageddon all grossing megabucks at the worldwide box office.

However, within a few years, the genre become all but unviable when real life started mirroring fiction, courtesy of international terrorism. Of course, there have been a few attempts in the intervening years to bring it back, but the successes have far outweighed the failures. Unfortunately, Geostorm serves as just another nail in the coffin. 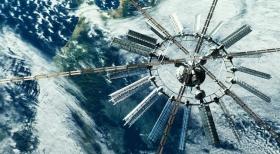 In the not-too-distant future, freak weather events threaten humankind with alarming frequency, causing the world to band together to create a network of satellites capable of manipulating weather patterns to the point where a violent storm is diffused into a harmless breeze. When the system starts to fail, resulting in deserts freezing over and a Hong Kong street crumbling into its foundations, NASA recalls the brilliant, yet shunned scientist Jake Lawson (Gerard Butler) to sort out the system he originally designed. But rather than an unfortunate series of system glitches, it soon becomes clear there are more nefarious intentions at play. 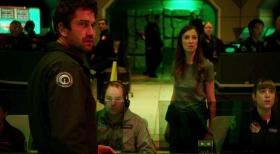 Evident from its synopsis and theatrical trailer campaign, it was rather obvious that Geostorm was going to find few (if any) friends in the critical class - but hope remained that Director Dean Devlin could channel his previous successes such as Independence Day and deliver an audience-pleasing, smash-hit blockbuster. Unfortunately for him (and the studio which backed him to the tune of $120 million), audiences tastes and expectations have changed significantly in the intervening years and are far less inclined to forgive paper-thin plots, mediocre acting and unconvincing visual effects. 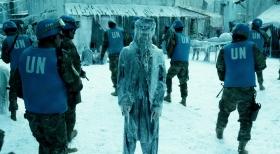 When it comes down to it, the only potential saving grace of the whole Geostorm enterprise would be via the strength of its visual effects - and to be honest, they're hardly impressive. The sequences of global doom are (with just one exception) completely unrelated to the main cast of characters and seem shoe-horned in for no reason other than to show off. Worse, almost all are shown in the last theatrical trailer. Just like The Phantom Menace, the trailer is literally better than the movie.

Despite a number of solid roles in 300 and Phantom of the Opera (in-between take-the-cash jobs like Gamer and Gods of Egypt, Gerard Butler can't shake his reputation as a low-rent Tom Hardy or Dwayne Johnson, and his performance here isn't going to change many opinions. It feels pedantic and superfluous to criticize just one aspect of the film, but Butler's just not believable as a scientist, let alone a satellite designer. 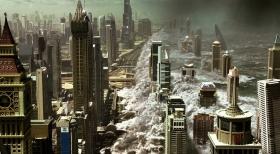 While Geostorm might be Director Dean Devlin's debut, he's certainly no stranger to big-budget filmmaking through his partnership with German Director Roland Emmerich. Unfortunately for him, from all accounts Geostorm's original vision for the film didn't satisfy the studio bigwigs, requiring extensive re-shoots (which didn't involve Devlin, due to his "unavailability") to the tune of $15 million, as well as incurring a two-year delay in order to bring it up to scratch. Suffice to say; he probably won't be extended an opportunity to do it again anytime soon. While re-shoot Director Danny Cannon (of Judge Dredd 'fame') remains uncredited, it's probably best for his newly rejuvenated TV career to stay as far away as possible to this monstrosity. 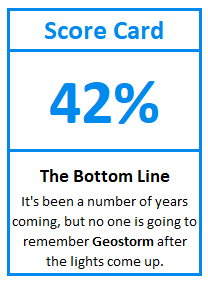