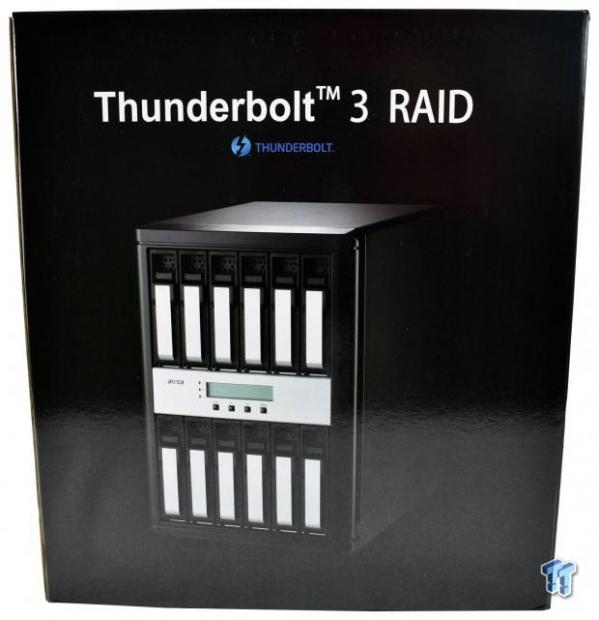 I have always enjoyed throwing a set of drives in RAID. Going back over a decade, I ran WD Raptor HDDs in my first gaming PC using a RAID card from Areca. More recently, we have looked at both the ARC-1883i with Seagate Enterprise Capacity v4 HDDs and the ARC-8050T2 with SanDisk Extreme SSDs. Today, we expand further looking at the latest Thunderbolt 3 enclosure from Areca, the ARC-8050T3-12.

This new enclosure builds on the Thunderbolt portfolio started with the original ARC-8050 and carried on by last year's ARC-8050T2. The ARC-8050T3 is the first Thunderbolt 3 RAID enclosure offered by Areca while also being the first platform they have launched with several bay options. 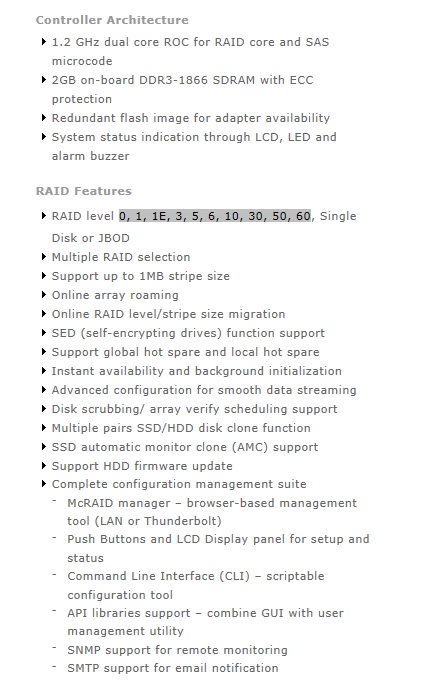 RAID support includes 0, 1, 1E, 3, 5, 6, 10, 30, 50, 60, along with Single Disk and JBOD modes. Further, we have features such as online RAID roaming, migrations, and multiple RAID selection which adds to the self-encrypting drives function and background/ instant allocation among others.

In the twelve-bay form factor sent over for review, the Areca ARC-8050T3 carries an MSRP of $2289.99 while the six and eight-bay models can be had for $1599 and $1799, respectively. Each of these units supports both Windows and MacOS with a Thunderbolt 3 connection, and the warranty is listed at three years.

We have a similar look for packaging on the T3 when compared to the T2. There is a lack of marketing information on the box, just an image of the enclosure and the Thunderbolt logo. 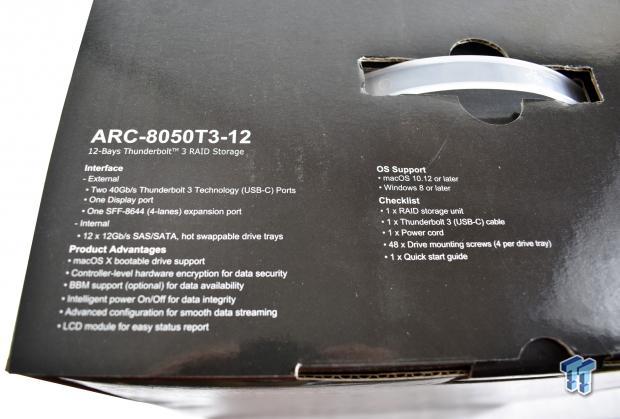 The top of the box gives a little more detail on the unit including interface and supported platforms. 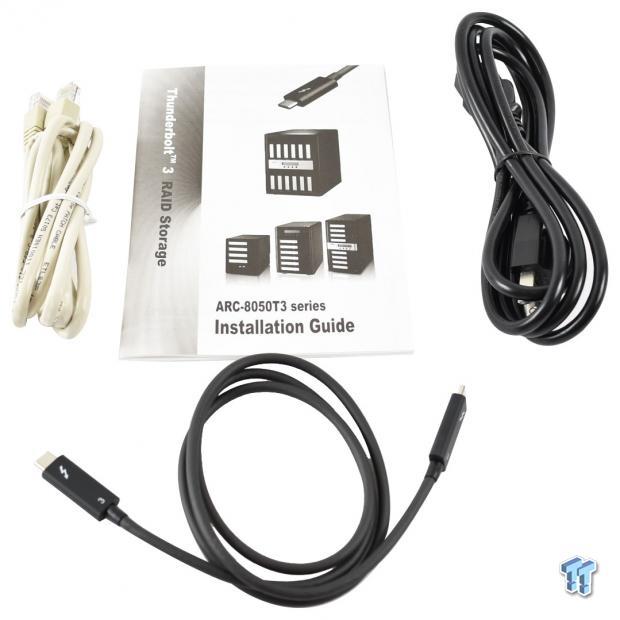 The scope of delivery includes a Thunderbolt 3 cable, power adapter, and ethernet cable in addition to the user manual. 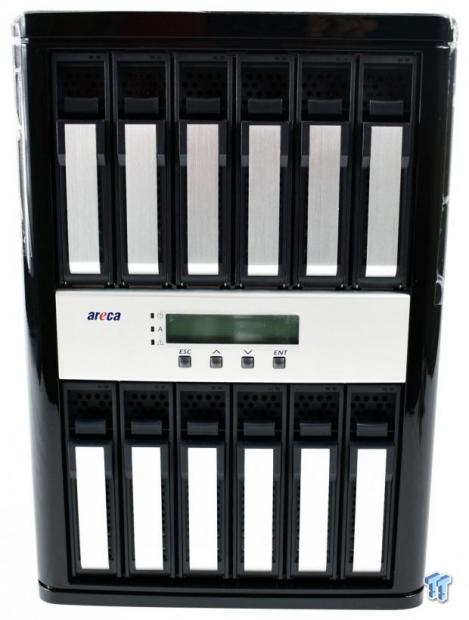 The front of the unit house all 12 bays, and the center, a small LCD screen with navigation buttons below. 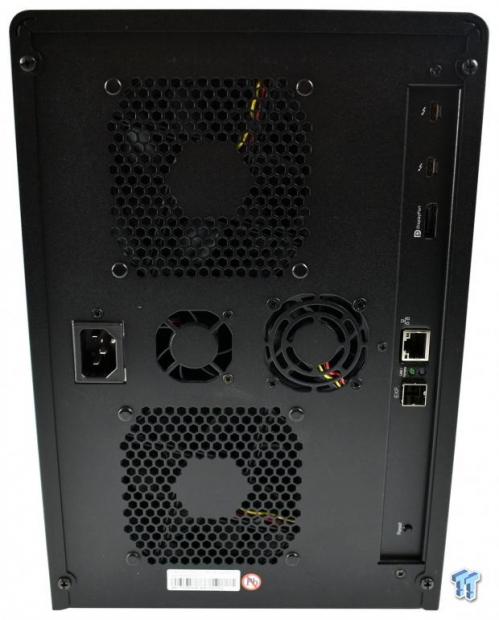 The backside starts with two Thunderbolt 3 ports and is followed by a single DisplayPort connection. We then have an RJ45 port and expansion port.

The dashboard for the 8050T3 isn't much different from the T2. The RAID set menu gives you a look at all your drives. For this review, we are using eight BP5e SSDs from MyDigitalSSD.

The system configuration menu allows setup of the system beeper, task priority, and switching between JBOD and RAID modes. Further, you can enable NCQ and configure cache settings.

Advanced configuration allows you to setup TLER and drive timeout settings. You can also optimize the enclosure for AV recording and streaming if needed.

The hardware monitor keeps an eye on the RoC and voltages for the entire appliance. At the bottom, you can see the cache size for the RoC and current PCIe link states.

The hardware monitor keeps an eye on the RoC and voltages for the entire appliance. 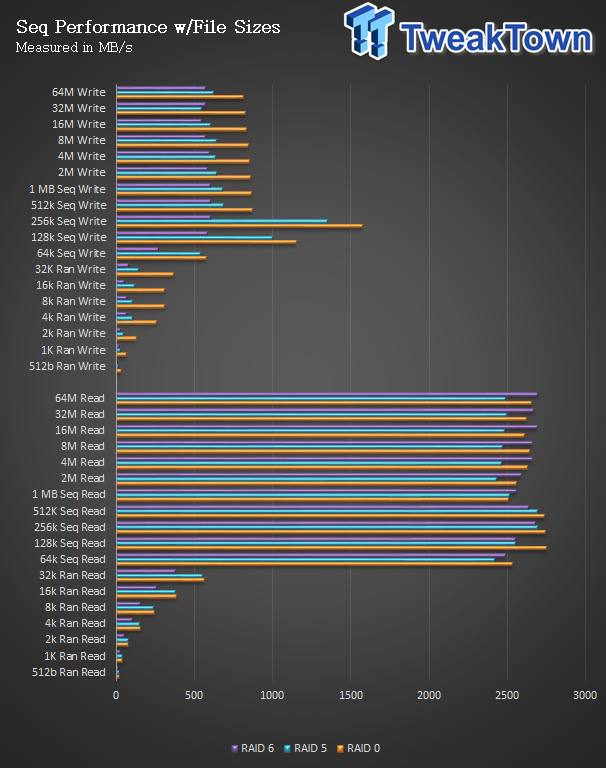 Write performance is best between 128K and 64M topping out at 1000 MB/s on a few occasions. 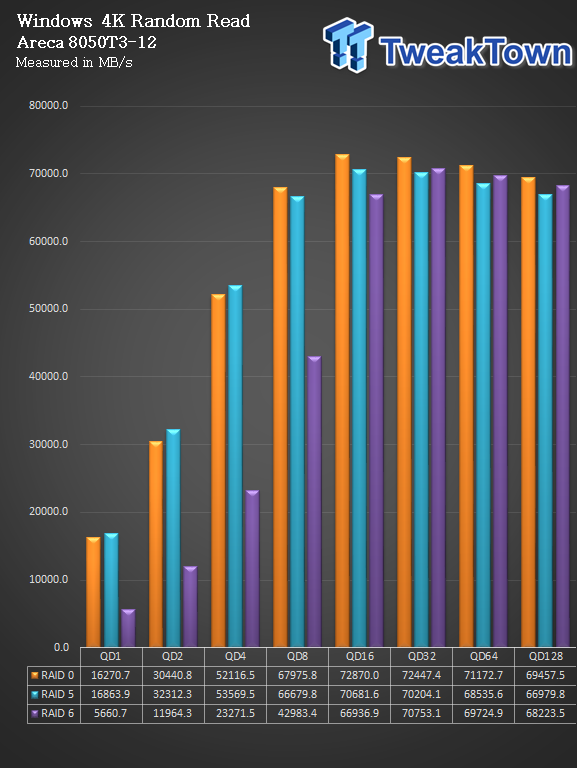 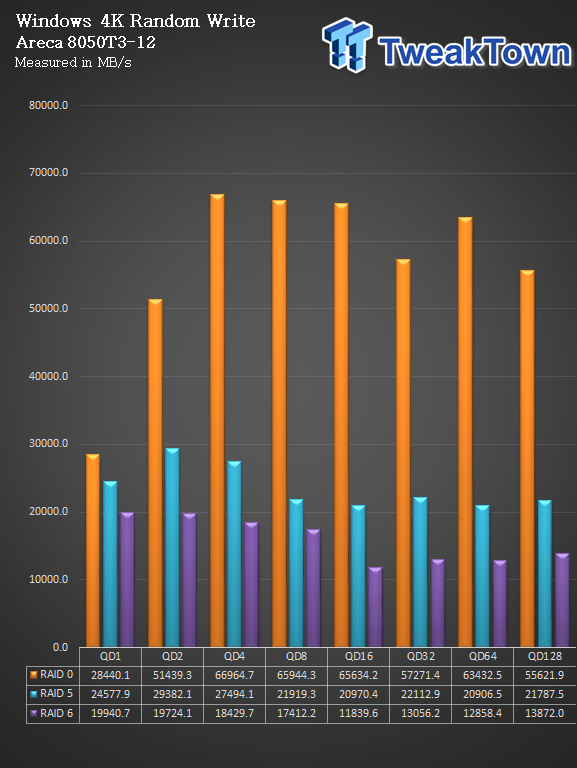 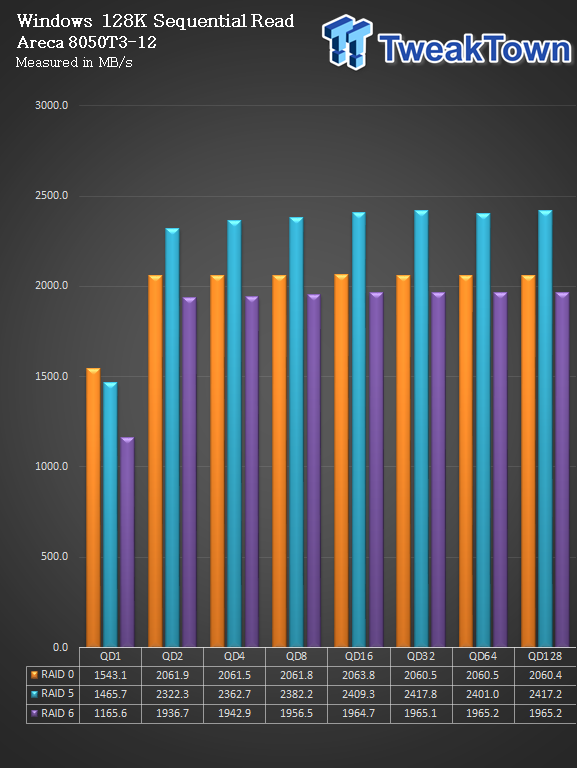 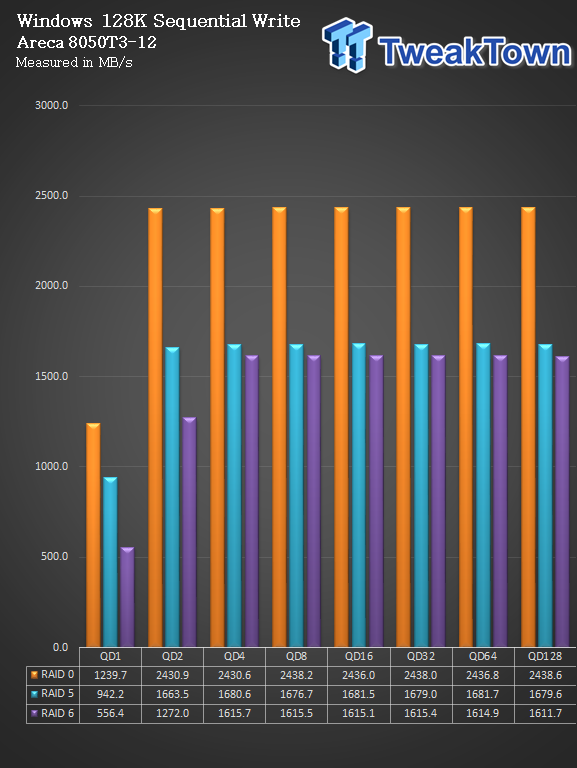 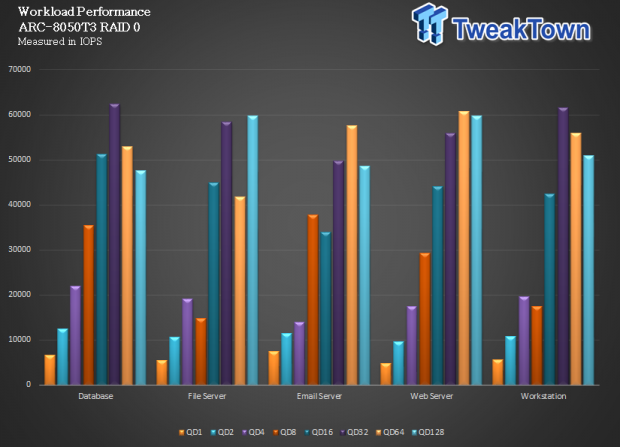 Database hits it peak quicker than most at 62K IOPS. 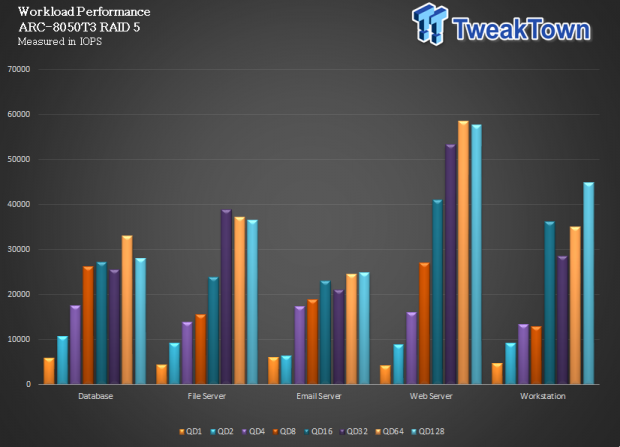 RAID 5 showed a much higher performance with Web Server; the T3 reached a peak of 59K IOPS. 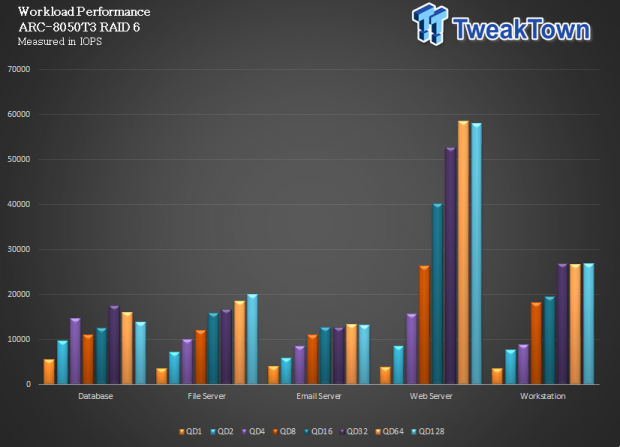 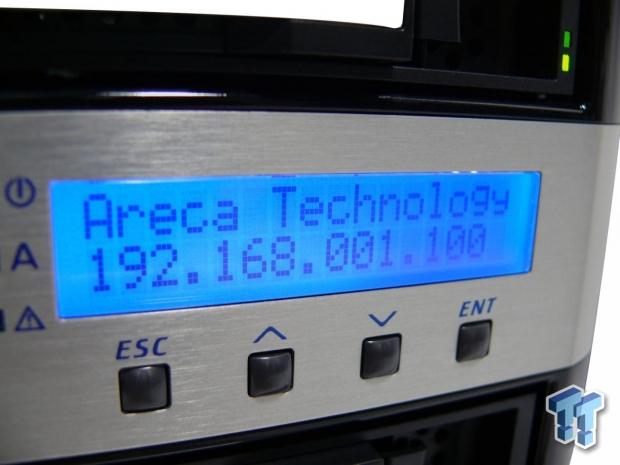 The Areca 8050 lineup have always been built like tanks. These units are built to survive, and even being diskless, do carry some weight. The new ARC-8050T3 series hasn't changed, the smallest model a six-bay unit comes in at 13.2lbs, the eight-bay 15lbs, and the 12-bay comes in at 21lbs. Weight can be a solid indicator of the internal build quality, and for a unit like the 8050 that has the potential to hold 12 drives, it needs every bit of steel it can get.

Moving on, performance doubled last year's 8050T2. When we tested that unit with eight SanDisk SSDs, we peaked at 750 MB/s. With this new unit, using eight drives, we could top 2500 MB/s, nearly reaching 2800 MB/s in some cases.

ATTO showed solid read performance from 64k to 64M and write performance shadowed that. 4K performance topped 70,000 IOPS QD8 through QD128, and moving through workloads, we saw Web Server perform the best for both RAID 5 and 6, while RAID 0 found consistent 60,000 IOPS.

For anyone that has ever set up or managed RAID cards and even HBAs, the 8050T3 menu system is very familiar. It's nearly identical across the entire 8050 lineup which makes migration from one system to another very easy. Areca doesn't shy away from features enabling this solution to take advantage of RAID levels 0, 1, 3, 5, 6, and even multi-RAID 50, 60, and 100 if you have enough drives.

It's obvious the 8050T3 isn't going to be for everyone, the price alone pretty much eliminates it from consumer use. That said, enthusiasts and prosumers that work with 4K, 5K, and 8K video with multiple 4K screens will love the amazing amount of throughput you can push through the brilliant-performing Areca ARC-8050T3.

The Bottom Line: Areca's ARC-8050T3 is hands down the quickest Thunderbolt 3 DAS solution to cross my desk. For media professionals and enthusiasts, this solution is a life changer.