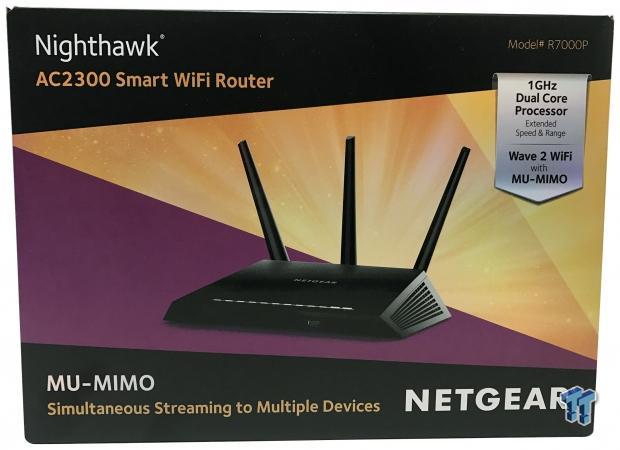 At the end of 2016 moving into 2017 and CES, NETGEAR made a series of announcements. One of those was the addition of a new entry-level wireless solution named the R7000P. This solution would take over the spot held by the original Nighthawk, offering increased range and throughput.

The R7000P is a unique solution in that it fits itself into a new class between AC1900 and AC2600. This new class offers a 600 Mbps 802.11n 2.4GHz band with 256QAM support and a 1625 Mbps 5GHz band, together making this an AC2300 class solution. NETGEAR has added in some technologies to its Wave 2 Nighthawk solution including MU-MIMO, Beamforming+, and the introduction of NETGEAR Up app for iOS and Android. 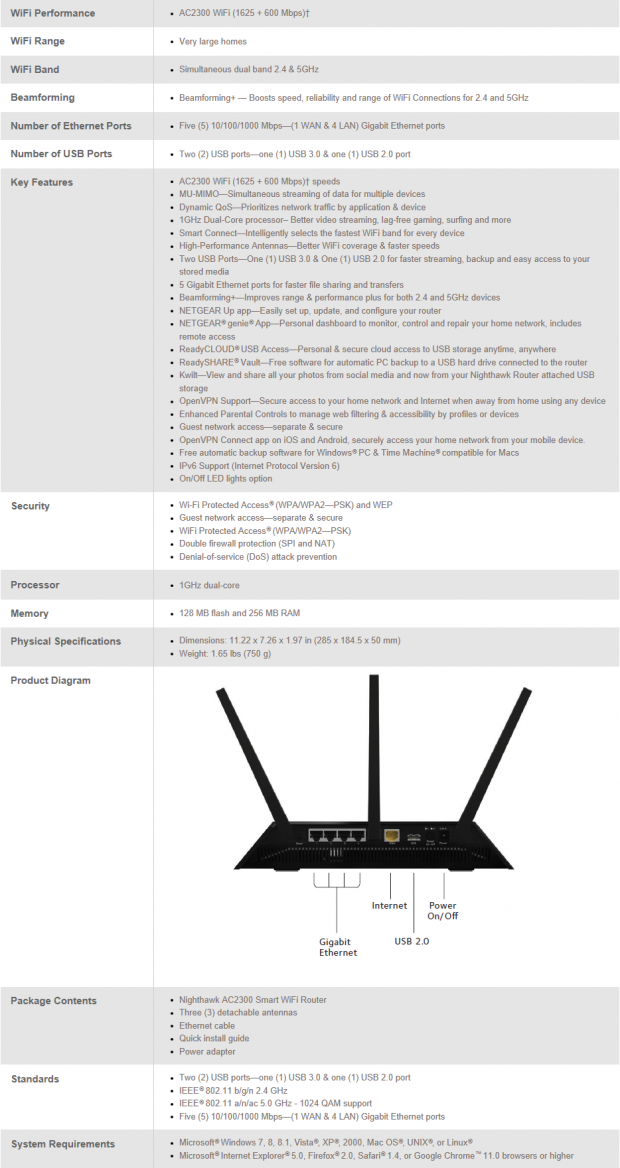 NETGEAR markets this solution to consumers with very large homes with its dual band configurations. As mentioned above, this router is equipped with Beamforming+ allowing for increased range. Five Gigabit Ethernet ports aid in both wired network connections and the WAN connection to your modem. Two USB ports allow for high throughput storage access to ReadyShare features such as Vault and ReadyShare Cloud.

On the hardware side, this platform houses a dual-core processor operating at 1GHz. 256MB of DDR3 and 128MB of flash are paired with it. Dimensions come in at 11.2 x 7.2 x 1.9 Inches with weight topping a hair over 1.6 pounds.

Packaging follows what we have seen from previous mainstream 802.11ac solutions. The right side gives us an indication of internal technologies, while the top left shows the class designation "AC2300". 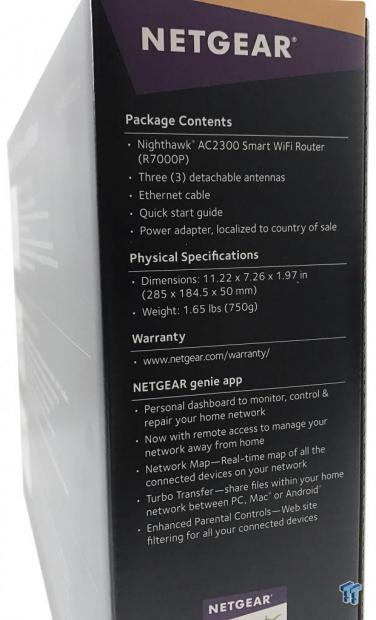 The spine houses warranty and dimensional information, along with a list of what is included. 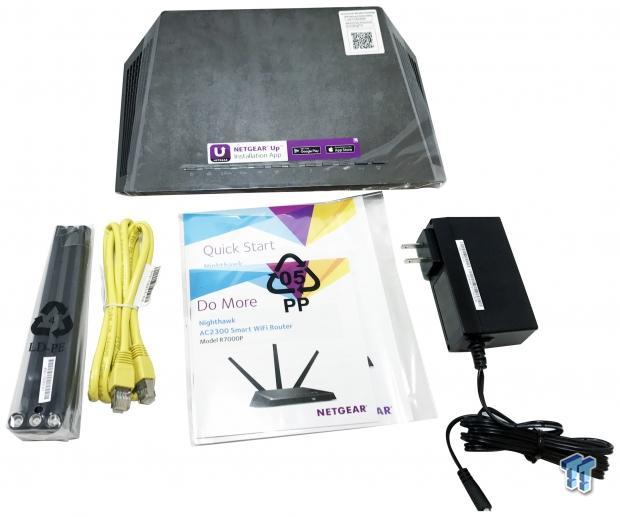 The scope of delivery includes three antennas, the power adapter, and ethernet cable. 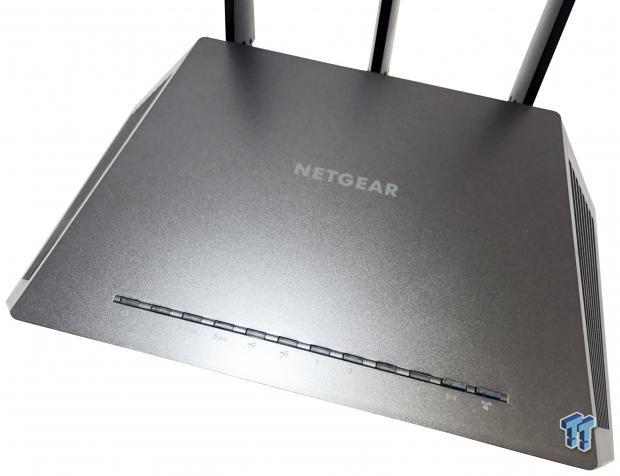 Taking a look at the R7000P, you may notice it uses the same shell as the original R7000. The top houses NETGEAR branding in the center with a full series of LEDs across the bottom.

Under the front of the router, you will find the USB 3.0 port. 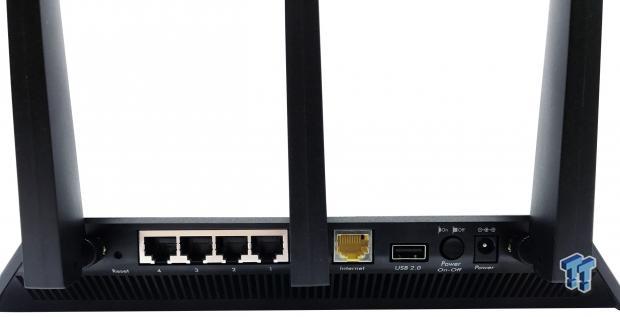 The backside from left to right houses four gigabit Ethernet ports, next to a single WAN in yellow. This is followed up by the USB 2.0 port and power switch and input. 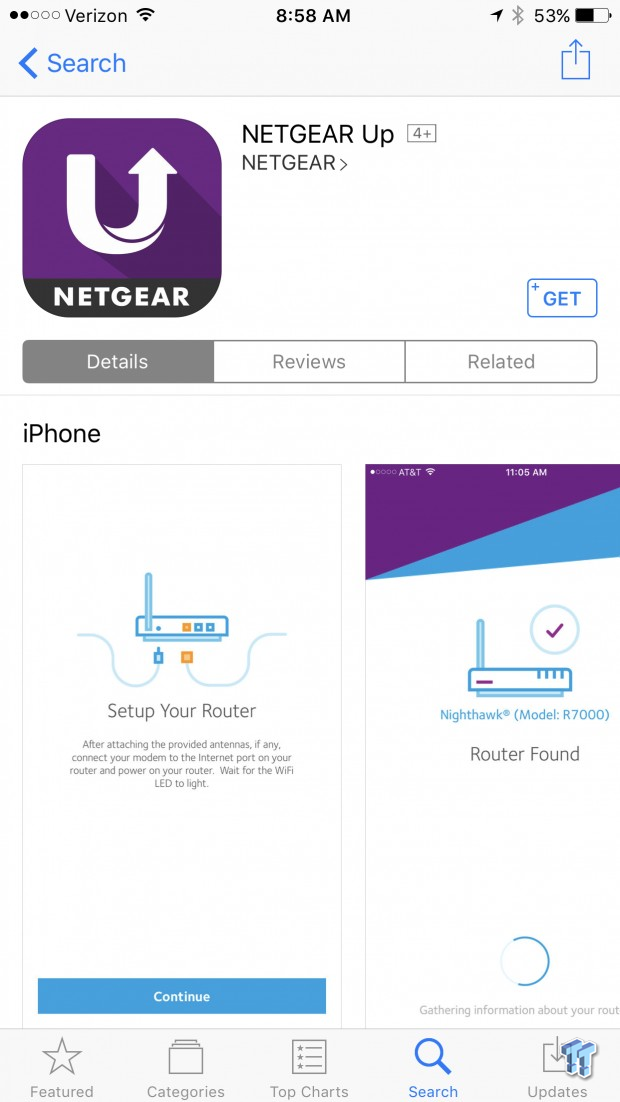 NETGEAR Up is now the preferred method to setup Nighthawk routers. This app is available for iOS and Android, I am using it on iOS with an iPhone 7 Plus. 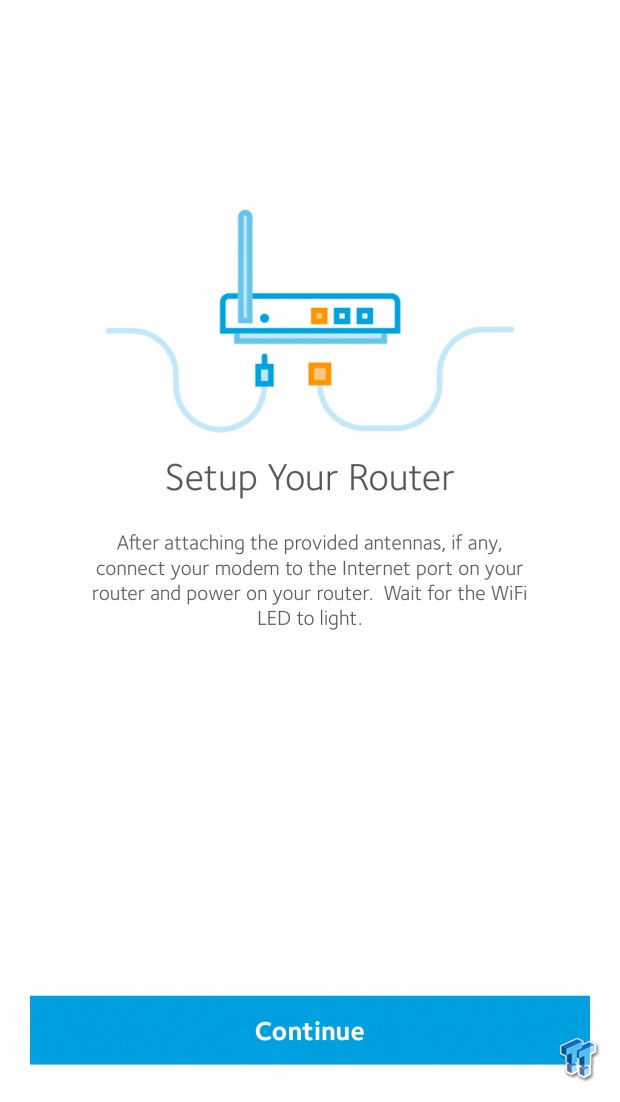 The app guides you through the setup with a series of menus. The first seen above aids in connecting cables. 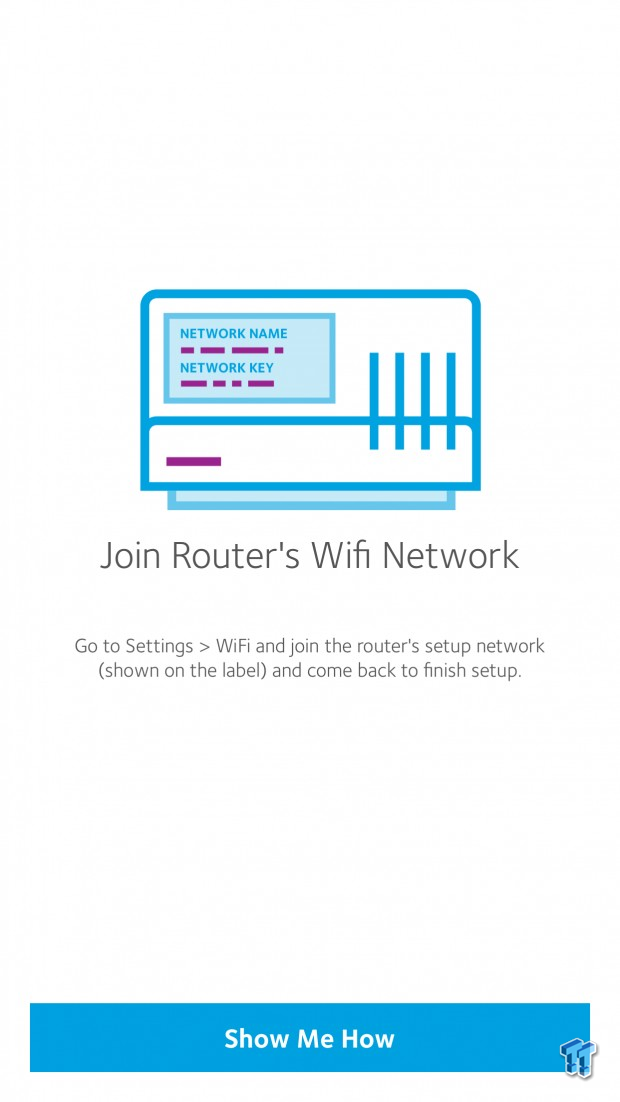 This next step continues to connecting to the default wireless network for the router. 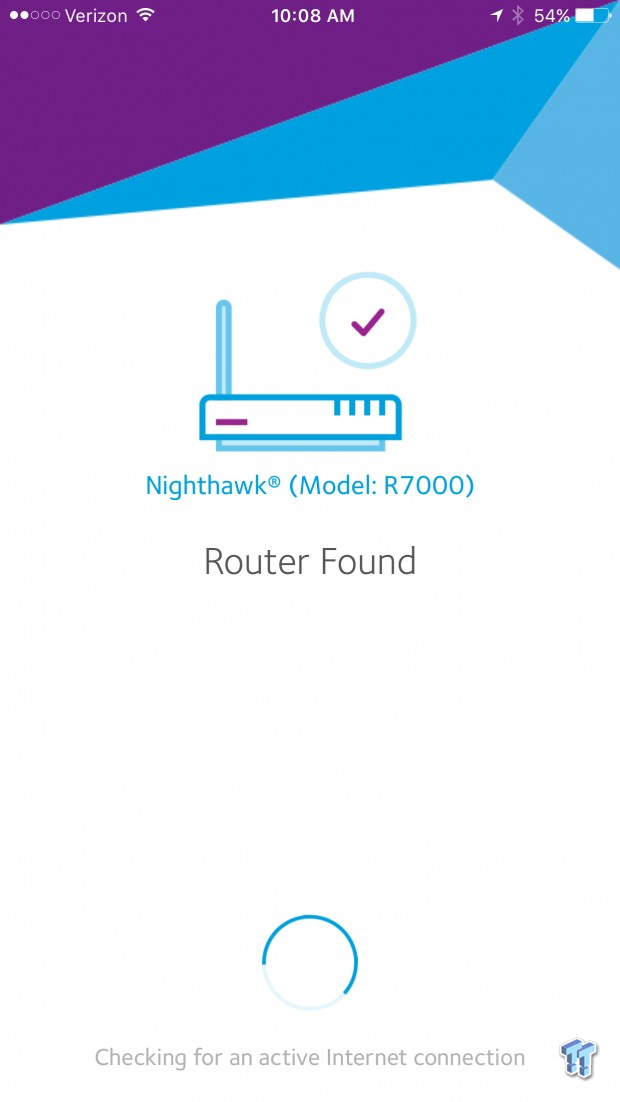 We move on to searching and finding the router. 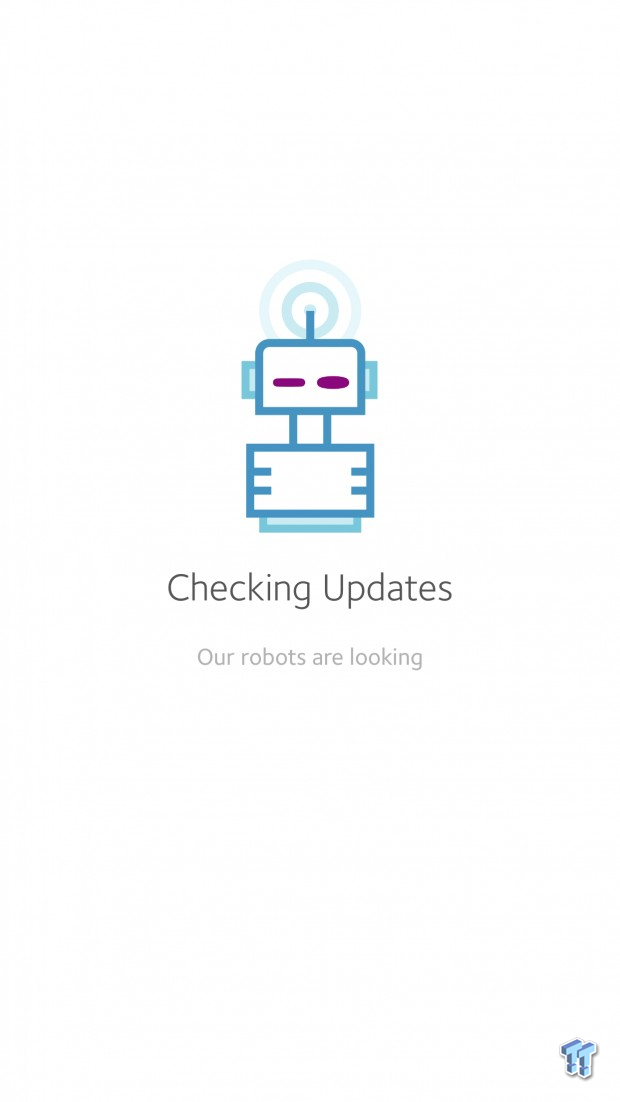 The app then checks for firmware updates, and if there are any, it will update your router to the latest version. 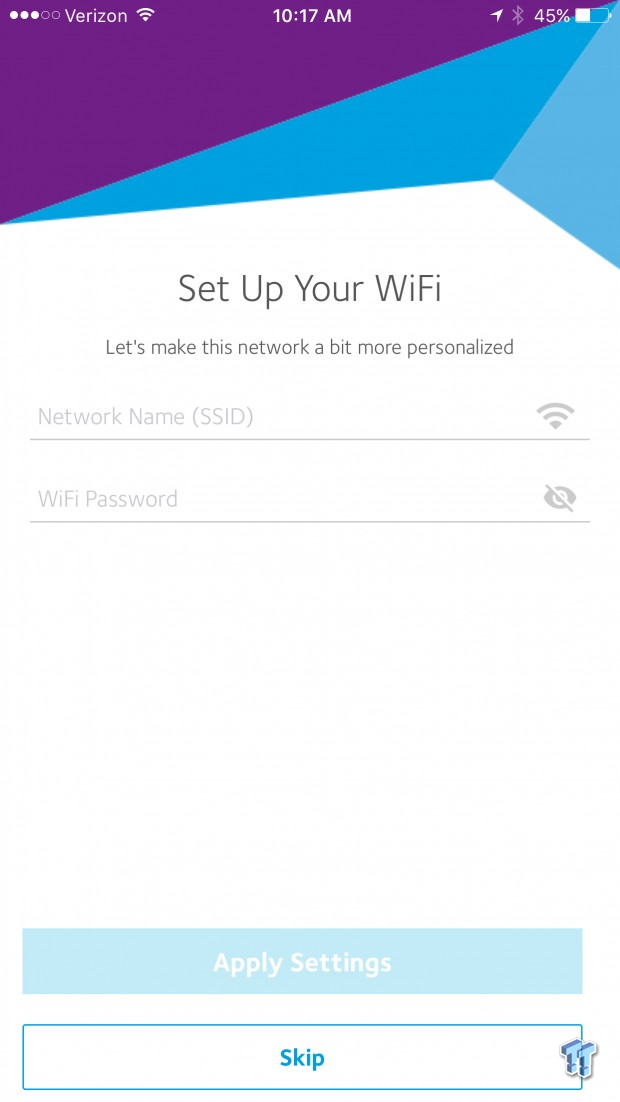 After we have the latest firmware, we move on to setting up our network SSID. This can be anything you want. 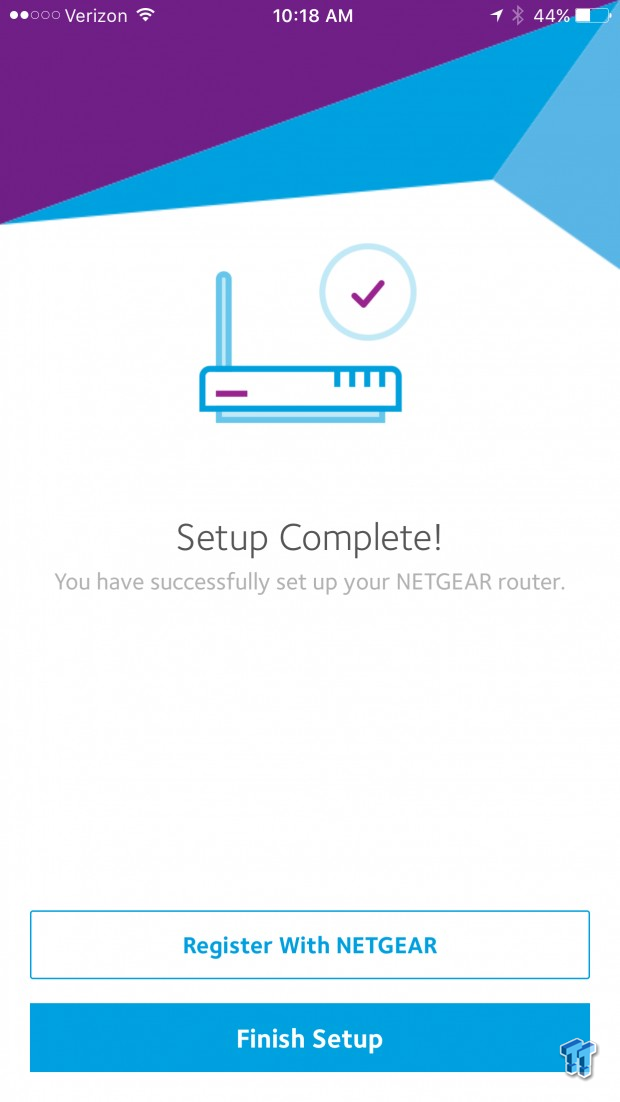 Last in setup, the router will configure with the settings you specified. 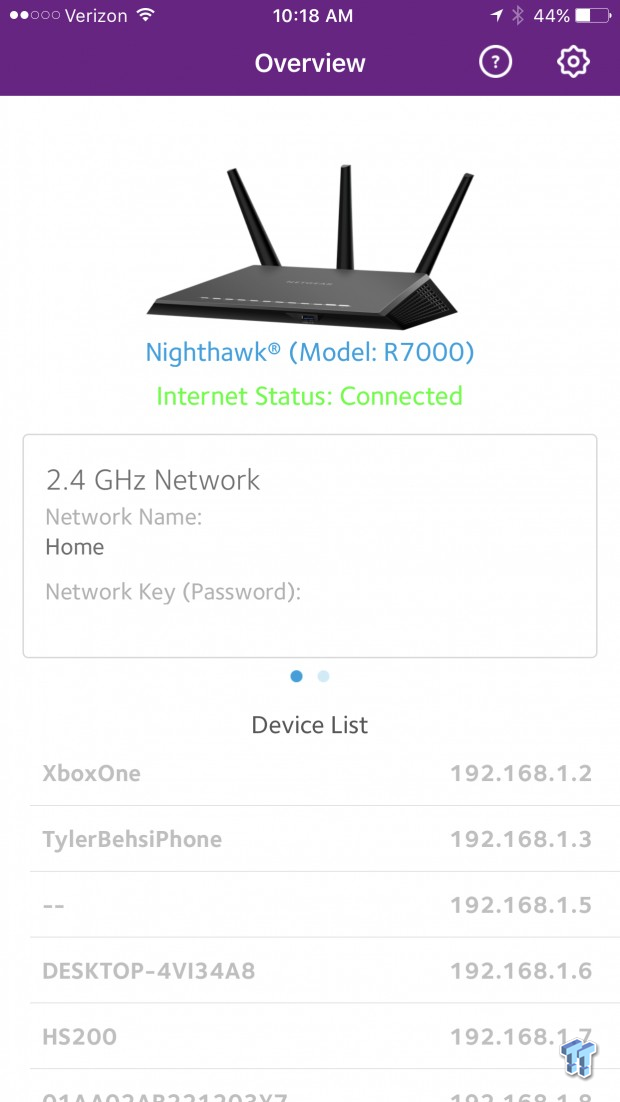 Once you are in the app, you will see the detected router at the top with the 2.4 and 5GHz networks listed with their passwords. Down below we have a device list that shows what is connected.

Along with the app, you still have the WebGUI available with all the standard features. 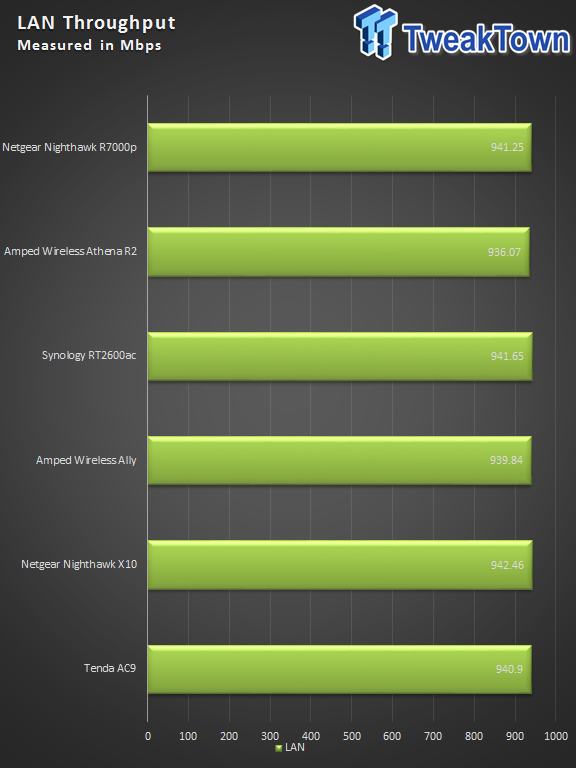 LAN throughput put the R7000P with the highest performing solutions. At 941 Mbps, this is third to the Nighthawk X10 and second to the RT2600ac. 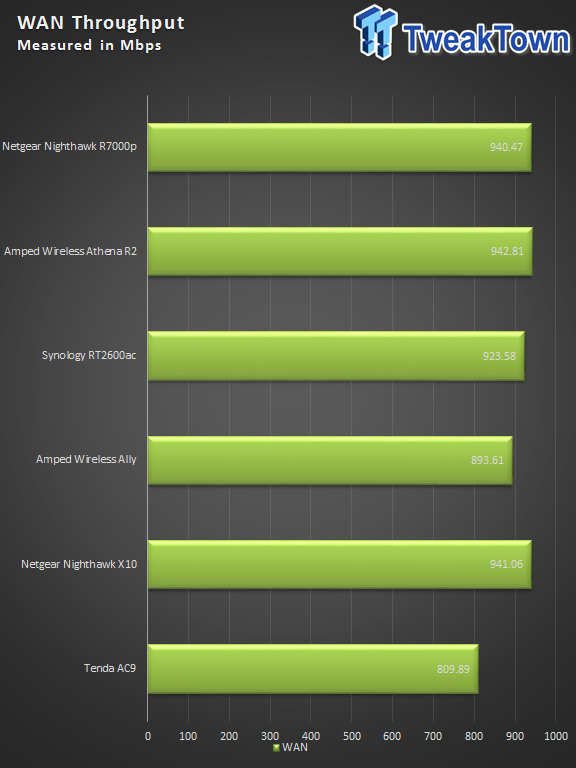 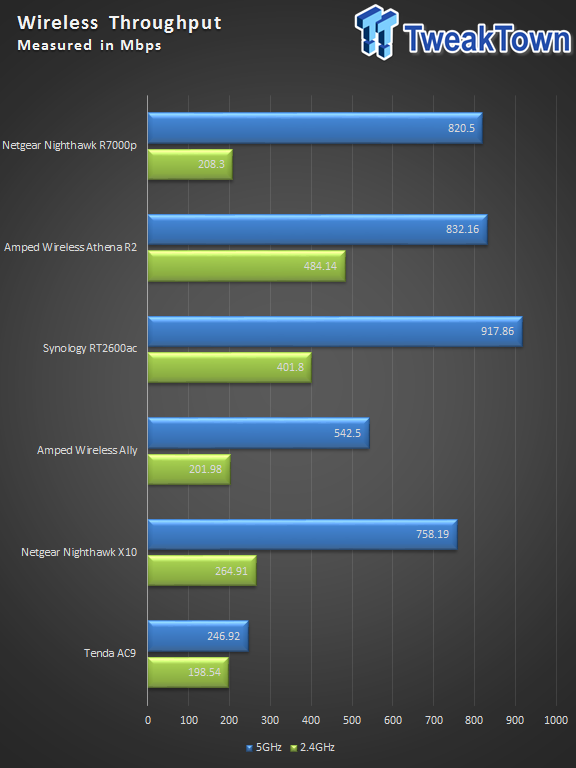 2.4GHz performance came in at 208 Mbps, slightly low in comparison. 5GHz managed 820 Mbps, third in the chart above. 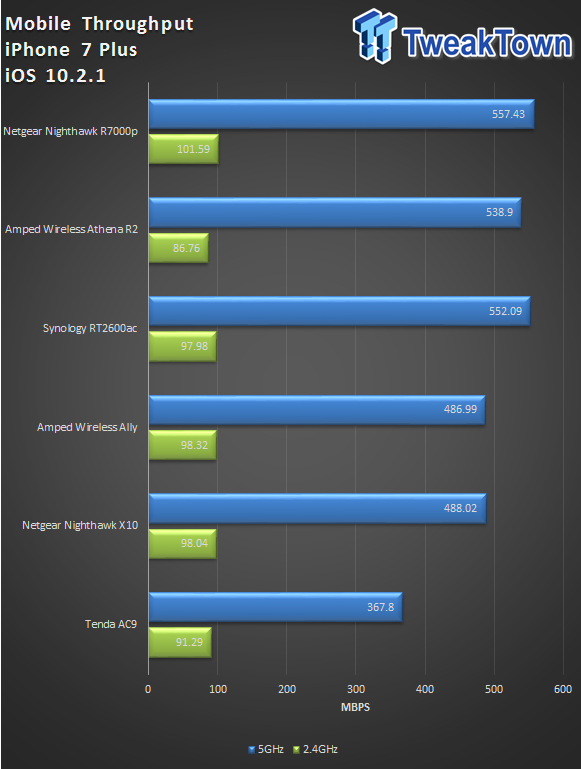 Our next test for this new setup sees how range affects performance. With this, we start at 10Ft and move out to 30Ft. Routers are tested in their default configuration for this part; the client device is the iPhone 7 Plus. 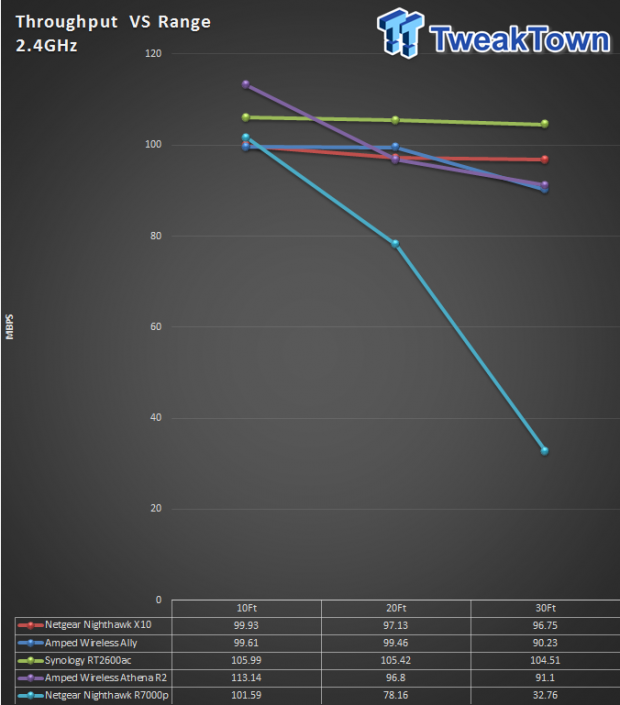 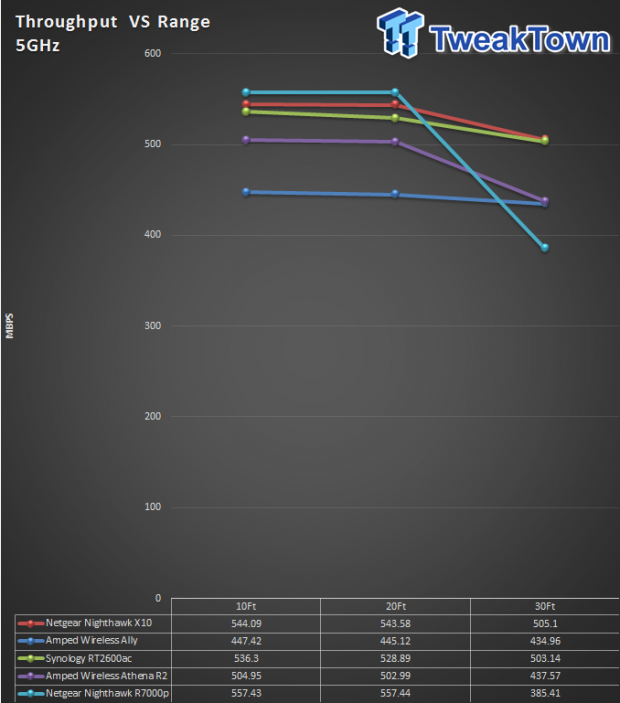 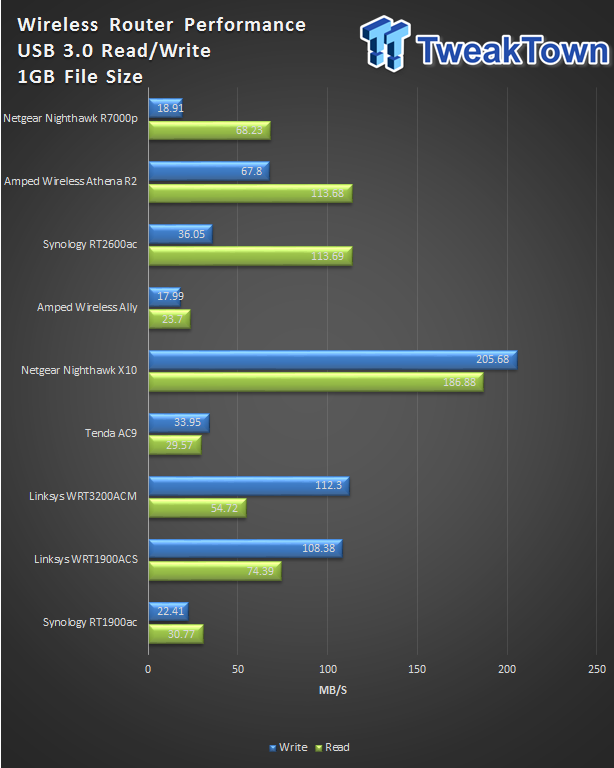 Storage performance wasn't terrible for the R7000P. Write performance topped out at 18 MB/s with a 1GB file size while read performance managed 68 MB/s.

It seems NETGEAR is on a constant refresh loop with many of their product lineups. What started years ago as a single solution with the R7000 Nighthawk is now the name for an entire portfolio of products. With the R7000P taking advantage of the enclosure from the original Nighthawk, the aesthetics and build quality are top notch, as they were originally. The LEDs on the front are quite bright and even more so at night, but there are software controls for those in the WebGUI.

On the performance side of things, the R7000P does perform slightly better than most AC1900 class solutions in real-world testing. I was able to reach 940 Mbps in LAN and WAN throughput. 2.4GHz throughput topped 200 Mbps, and 5GHz was a touch over 800 Mbps. Mobile throughput hit 100 Mbps over 2.4GHz while 5GHz hit the performance limit of the iPhone's wireless chipset at 550 Mbps.

Looking at the range for the R7000P, it does well, and for the most part, it's on par with mid-range AC1900 class routers. On the 2.4GHz band, we see a good amount of throughput drop from 10 to 30Ft while the 5GHz band seemed to hold its performance from 10 through 20Ft only losing slightly at 30Ft.

Setup has gotten slightly easier with the addition of the NETGEAR Up application. Using it on iOS was straight forward with very little issue. I wouldn't say it's a full featured app as you will need to use the WebGUI to change settings after initial setup, but it is a quick and easy method of getting things set up and running.

In closing, the R7000P fills a gap in the midrange router market between the aging R7000 and Nighthawk X4. Does it offer enough performance to justify the price increase over a standard AC1900 solution? For me, No.

The Bottom Line: NETGEAR's Nighthawk R7000P is a good mid-range routing solution with solid features, but for most, the added cost just isn't necessary for such small performance gains.