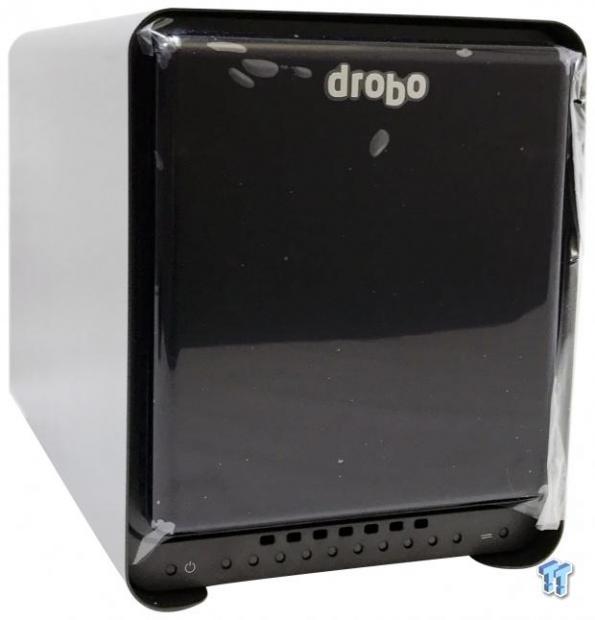 Over the years, I have had a few Drobo products come through. Most recently we looked at the 5C, the latest DAS from Drobo. Today, we switch gears over to the network storage market and look at the latest NAS appliance, the 5N2.

The 5N2 is the latest generation of network appliance from Drobo. At first glance, this solution looks exactly like any other tower appliance from Drobo and even digging in, the entire enclosure, apart from the rear I/O, is nearly identical to the 5D, 5C, and 5N. The Drobo design which they have held onto throughout the years is iconic of the brand.

One of the largest features of Drobo is BeyondRAID, leveraging this you can mix and match drive sizes and perform on-the-fly drive swaps if you want to increase capacity or if you have the misfortune of having a drive fail. Over the years, Drobo has added to the feature list now offering apps through the myDrobo platform and backup via Time Machine and Windows Backup. Remote Replication is handled via Drobo Sync. 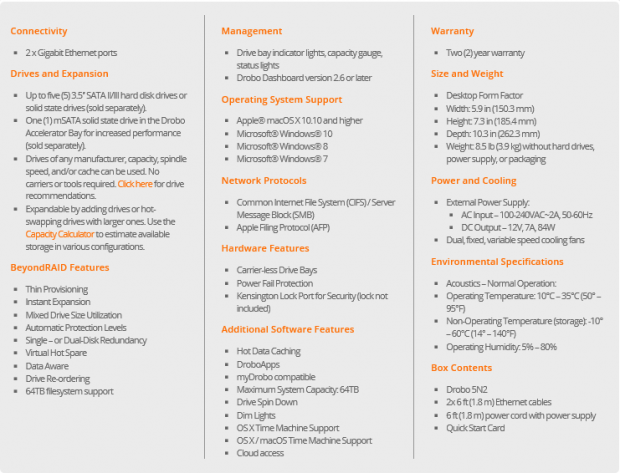 Specifications for the Drobo 5N2 start off with connectivity via its 2x Gigabit Ethernet ports. Drives are handled via the five tool-free bays on the front of the unit. Supported solutions include 3.5" SATA II and III HDDs and SSDs. On the bottom of the unit, you will find an mSATA slot used for caching. The 5N2 supports CIFS, SMB, and AFP for data access with power fail protection and a Kensington lock port for security. 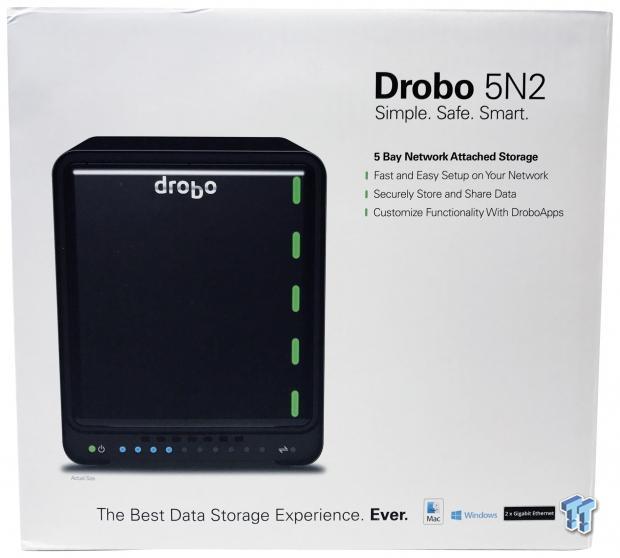 The 5N2 is featured right on the front of the box artwork. To the right, we have features listed and below compatibility and connectivity. 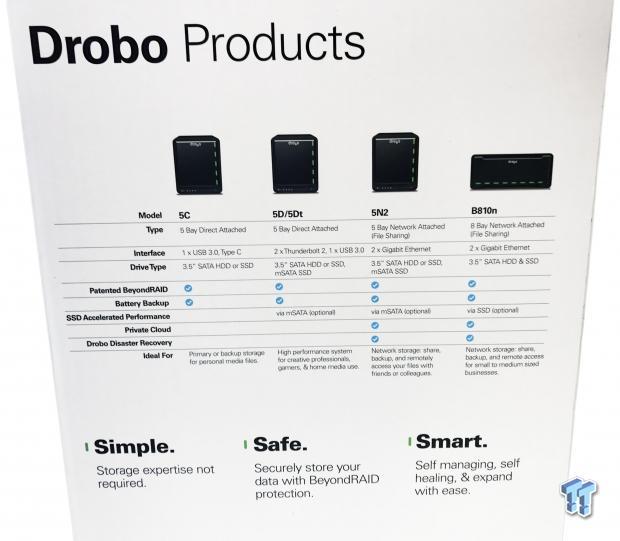 The backside of the box gives a solid comparison between all current Drobo models. 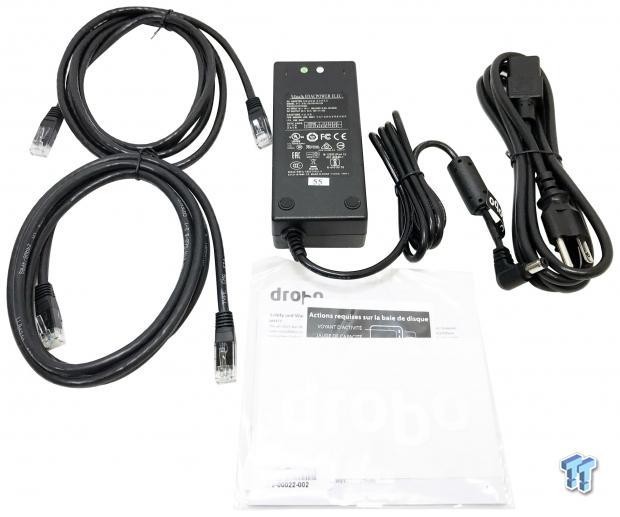 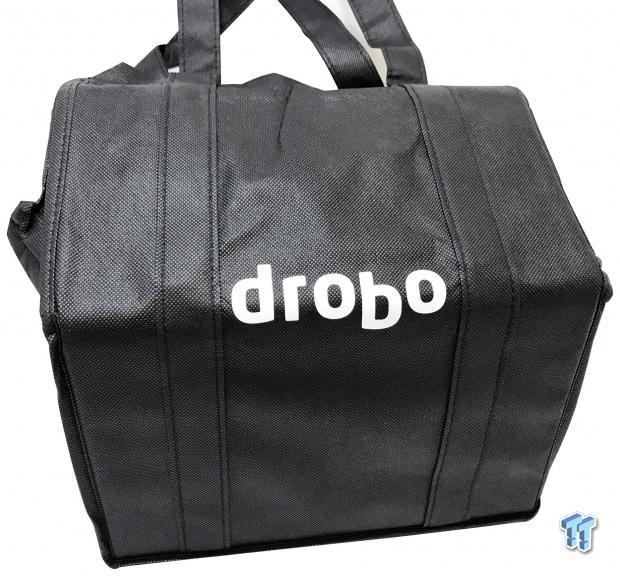 Like previous Drobo appliances, the 5N2 came packaged in a carrying bag. 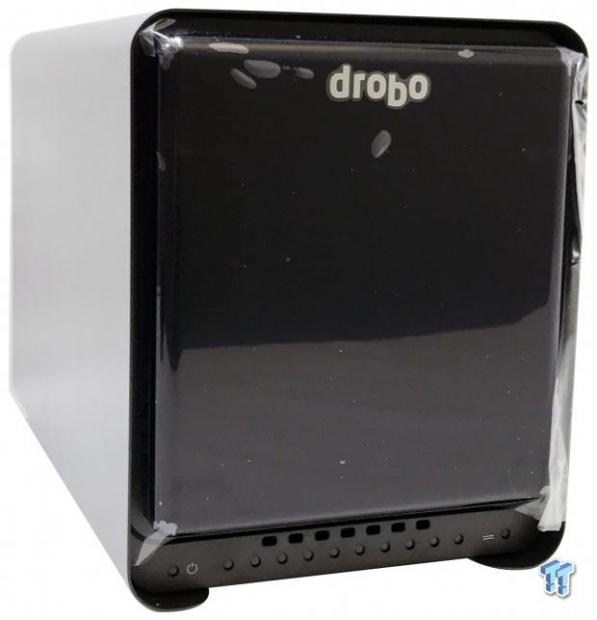 Above, we have our first look at the 5N2. Across the bottom, we have a series of LEDs for power and status. 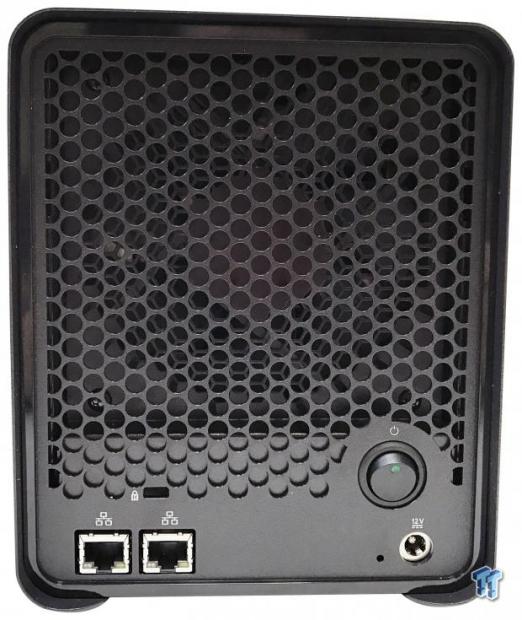 The rear I/O is quite clean for a NAS, consisting of two Gigabit Ethernet ports and a power input. The large rocker switch is the power button. 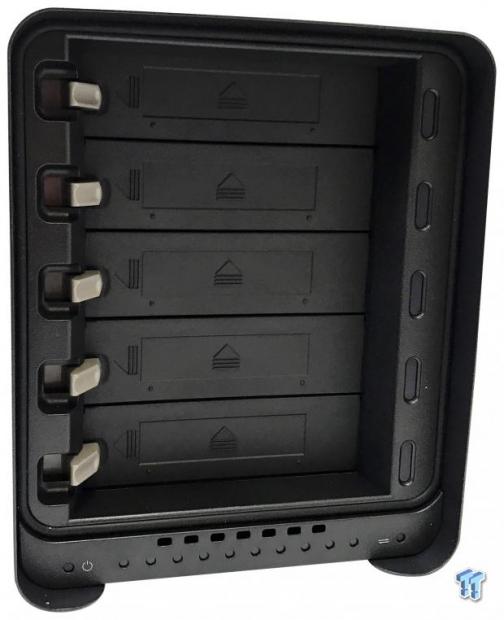 Removing the front cover, we reveal all five drive bays. These are tool-less bays that do not even need trays. Your drives just slide in and lock with the gray clips on the left. 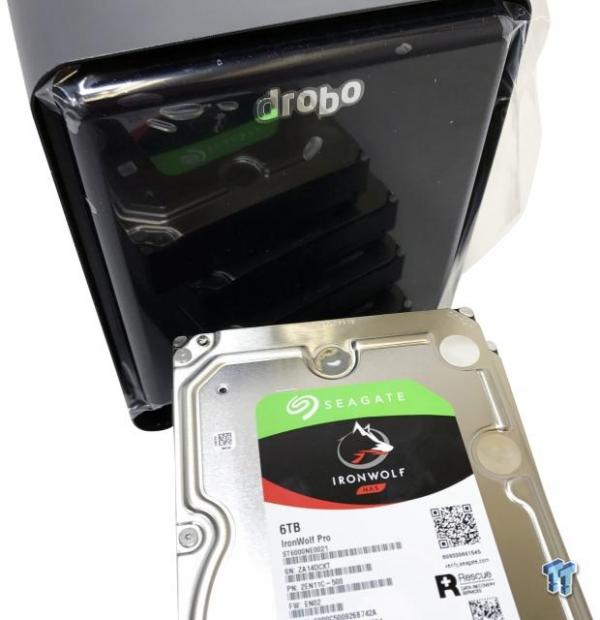 For this review, we are using Seagate IronWolf Pro 6TB NAS drives. 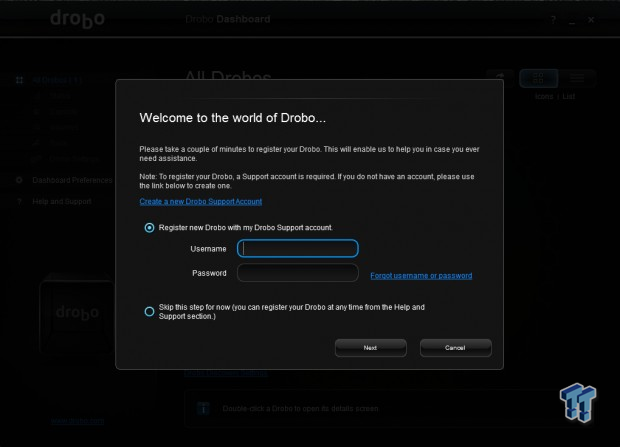 The 5N2 uses the Drobo Dashboard for setup and configuring. To start this process, we first sign up for a Drobo support account. 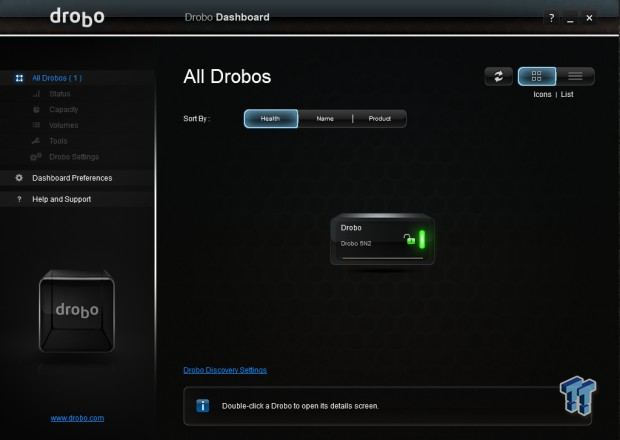 Here we have the landing page for the 5N2. As you can see to the right, Dashboard has found our 5N2, and it is unlocked ready to go. 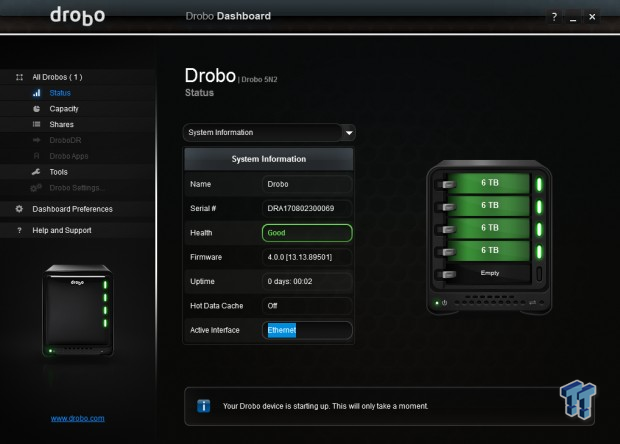 Status gives us an overview of the 5N2, including installed drives to the far right and further details on firmware and uptime in the center. 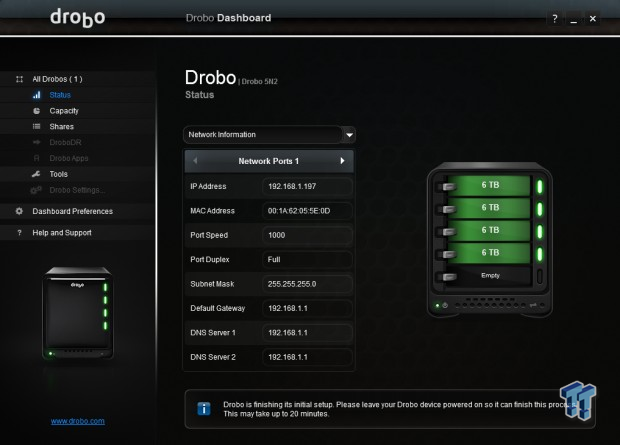 Going to the Network information tab, we see the MAC, IP Address and currently active port speed and duplex. 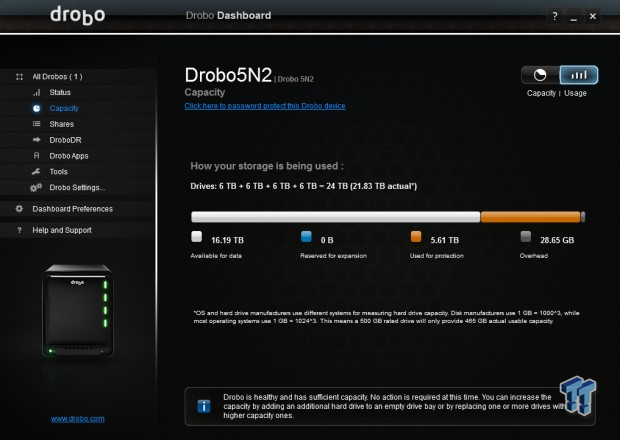 Moving on, we look at the capacity menu. This shows us a breakdown of the current volume. We have 16TB available for data with 5.6 used for data protection. 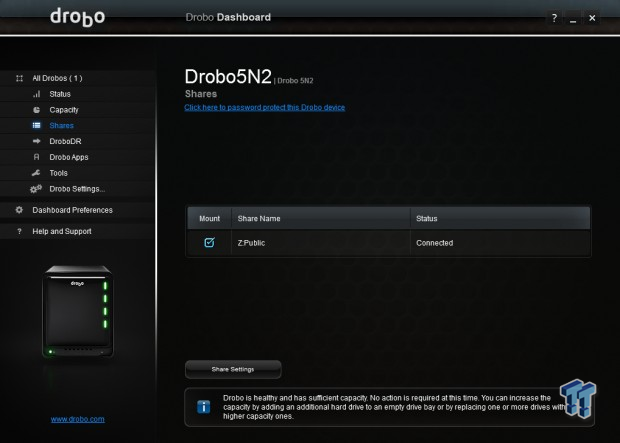 To access the data on the 5N2, you need to create shares. Above, I have created and mounted a Public share for testing. 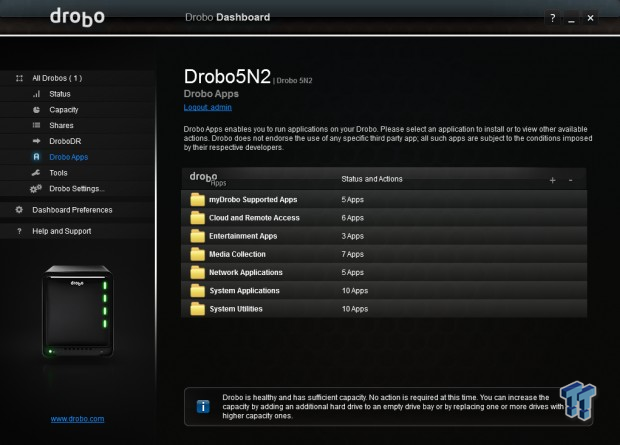 Drobo Apps are listed by category. These categories include cloud and remote access, entertainment and media along with network and system applications. 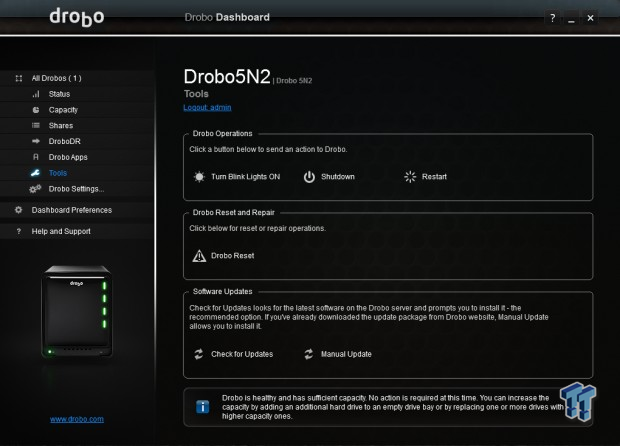 In the tools menu, you will find the ability to control the lights on the NAS along with reset and updating the firmware. 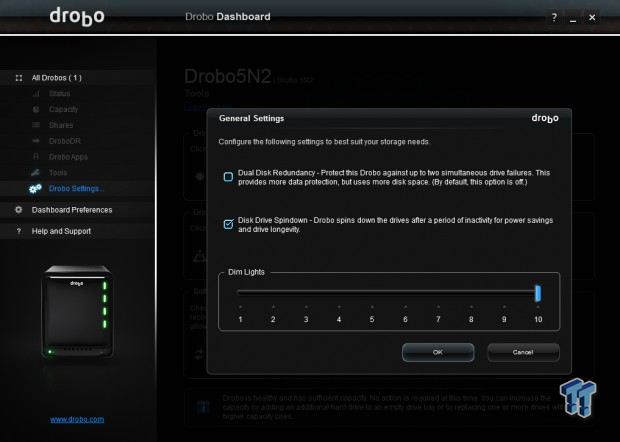 Drobo Settings gives you access to the redundancy settings. Here you can switch from dual to single along with controlling disk spin down. 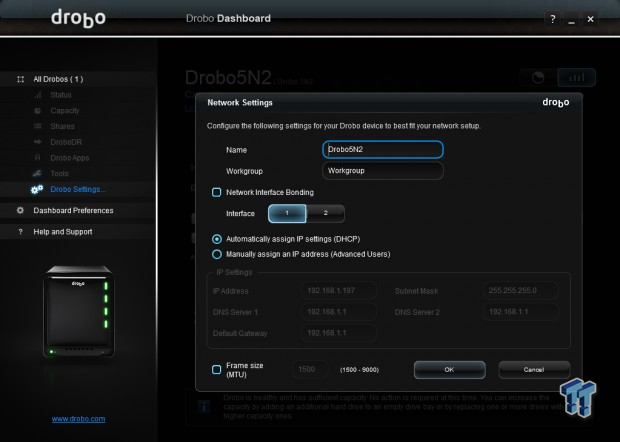 Network settings allow you to configure the name and workgroup along with the interface and NIC bonding.

The Drobo 5N2 is not directly comparable to any other NAS I have tested due to the lack of iSCSI. In my conventional testing, I would use iSCSI to achieve the highest levels of performance from the appliance or the Drobo I used a mapped network drive. 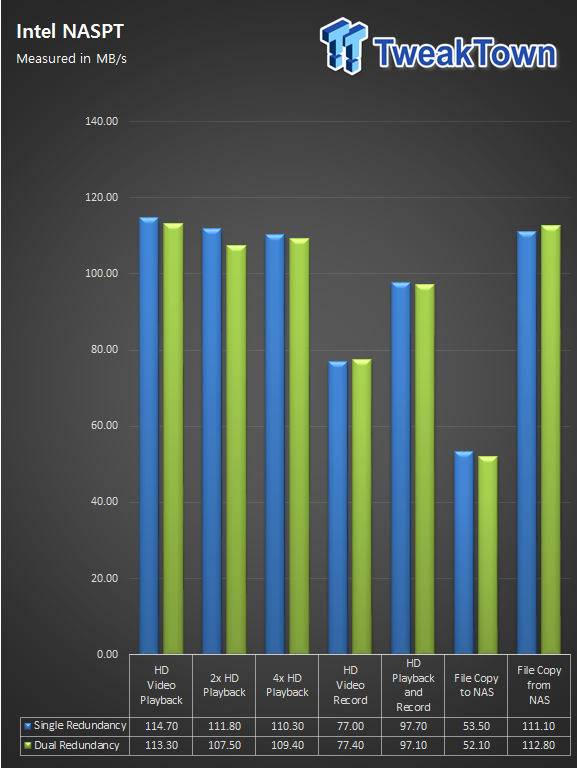 Starting things off we have Intel NASPT, a staple of NAS testing for most. As you can see, I did test both redundancy modes and found very little performance hit to be taken. At the peak, this solution could hit 114 MB/s in playback with the lowest performance coming from File Copy to the NAS at 52 MB/s. 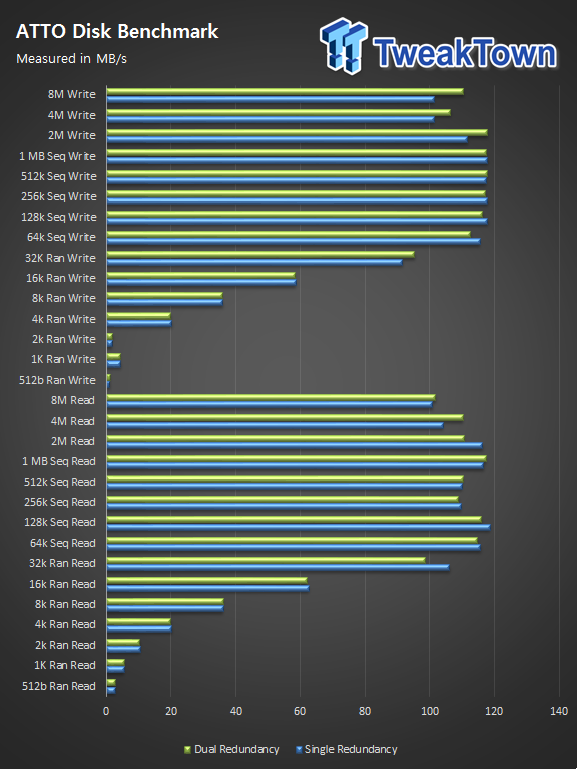 ATTO Disk Benchmark was up next and it gives us an idea of the sequential performance of the NAS. At the peak, we are seeing 118 MB/s read at 128K and write performance was steady at 117 MB/s from 256K through 1M. 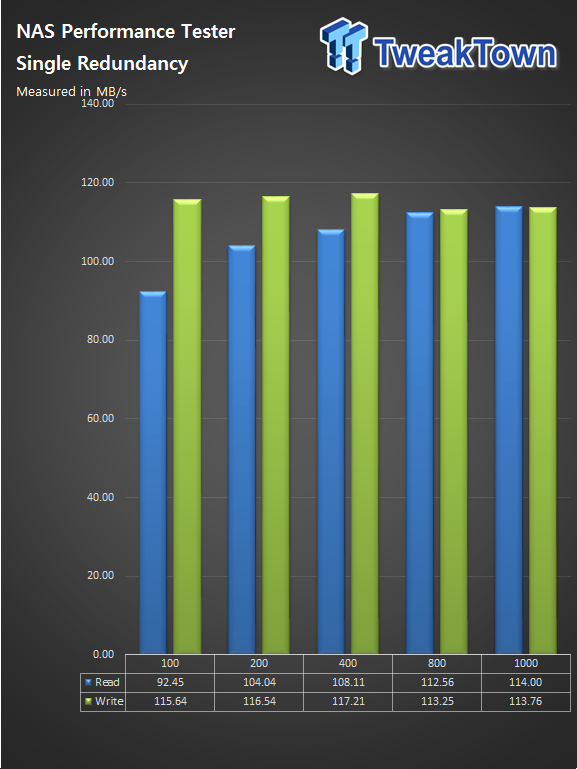 NAS Performance Tester simply throws single large file sizes at the NAS to test performance with a large amount of data. As you can see above, read performance starts off a touch under 100 MB/s but quickly takes off reaching a peak of 114 MB/s. Write performance from the start is at 115 MB/s and hold that throughout the test. 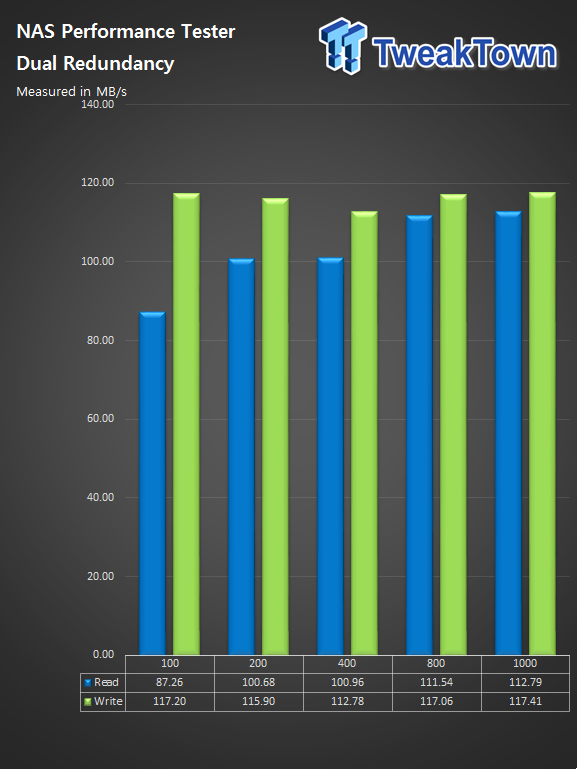 Looking at dual redundancy, we have similar performance. Read start off at 87 MB/s reaching a peak of 112 MB/s while write starts at 117 MB/s and holds. 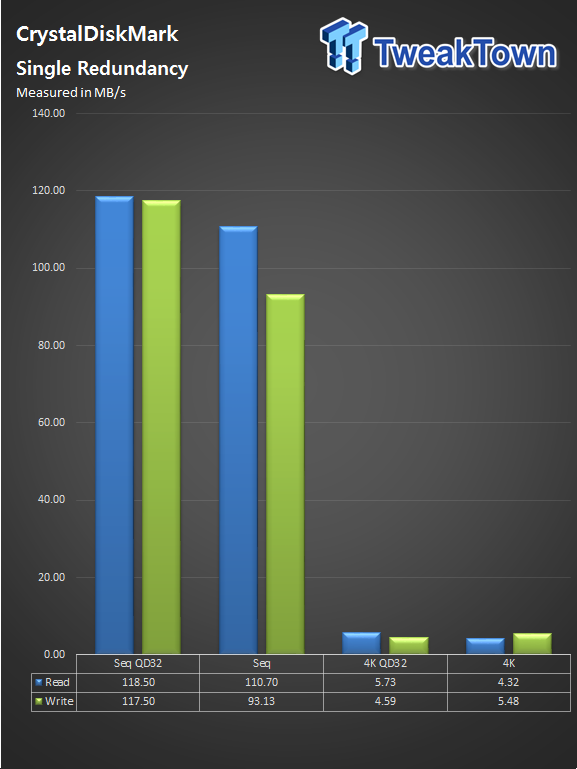 Last, we have a couple of charts for CrystalDiskMark. Read performance at QD1 hovers around 110 MB/s read and 93 MB/s write while QD32 increases that to 118 MB/s read and 117.5 MB/s write. 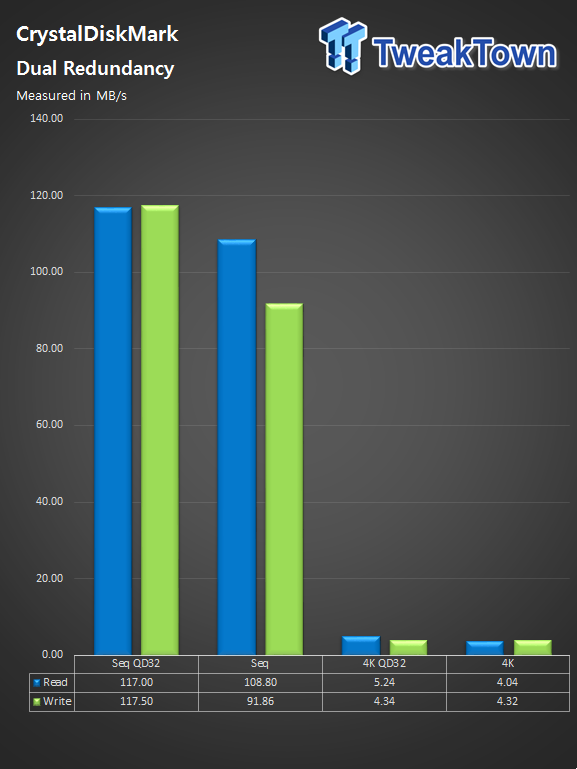 Dual redundancy doesn't affect the 5N2 much at all, results here were similar at 117 MB/s read and write.

I spent a good amount of time with the 5N2 for this review and found the build quality is equal to the 5C at the very least and overall quite good. The enclosure is designed to be durable while also a work of art for your desktop with its lighting. The only downfall for the enclosure is the glossy front panel and it's not that it doesn't look good because it does. The problem comes from the amount of dirt and dust that instantly attract to it upon removal of the protective film.

The software or rather dashboard works as smoothly as it ever has. From the 5D to 5C and now my time with the 5N2, I haven't had trouble setting up or configuring a Drobo appliance, largely due to the ease of use of the Dashboard app. As you saw if you read page three, the dashboard includes a wealth of information on the appliance along with the structure to install apps and manage storage capacity and redundancy.

Performance, while I only used a single connection, was top notch. In everything I could throw at it with the absence of iSCSI, the unit provided consistent results. Sequential performance stayed around 118 MB/s while write was 117 MB/s, and this proved true for both single and dual redundancy. To single out of a few areas where this solution excels, I would say between 64K and 2M read and 64K and 1M write.

The Drobo 5N2 does require you to commit to an ecosystem as BeyondRAID much like any other hybrid storage technology is proprietary to Drobo itself. With that said, the Drobo ecosystem isn't massive, so you won't have a ton of options for an upgrade, but they do offer solid support and warranty.

The Bottom Line: Drobo's 5N2 is a slight upgrade over the original 5N in terms of performance and more is to be had if you have the network infrastructure in place to take advantage of NIC bonding.