It's probably the most expensive water bottle you'd ever want to buy, but if you're on the lookout for some healthy living accessories to accompany your fitness wearable, the Hidrate Spark is a fairly good choice.

If you're anything like me, odds are you're drinking much less water than you should be each day. Sure, there's water in Coca-Cola and Red Bull, but that's not quite what I mean. No, I'm talking about pure unadulterated H20, and health experts say we should be drinking about 2 liters of it every day. Sound hard? Changing habits always is, but the science is in - the benefits of water to your health are without question. So, how can one make water consumption a little less of a chore? That's what Hidrate Spark seeks to do with the second iteration of their smart water bottle. So, does it actually help? Let's take a look. 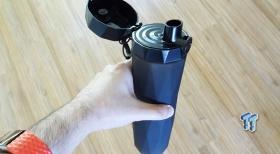 With the rise of the fitness technology sector in recent years popularizing all manner of wearables, wi-fi scales and even smart clothing, it seems there's no shortage of demand for data from everything and everything around us. If you've read my Fitbit wearable reviews, you'll know that I've been quite taken by them and I can genuinely say that it's helped me be a healthier, happier person. But I do know that there's a lot that I still need to improve on, and so the Hidrate Spark holds some appeal to me, especially since it plays very nicely with the Fitbit software ecosystem. It seems I'm not alone either; the Hidrate Spark started life in 2015 via a hugely successful Kickstarter campaign, which generated $627,00 from their humble $35,000 goal. This updated version improves overall stability and brings a number of new features to the table.

From the outside, there's precious little to suggest that the Hidrate Spark is anything other than a standard plastic drink bottle. To be sure, it's a very nice drink bottle, with a nice grippy plastic coating and a spring-loaded spout guard to prevent spillage, but it's not until you delve inside that it begins to set itself apart. Unscrewing the sensor lid reveals what Hidrate Spark refer to as the "sensor stick," which in practice is a long piece of plastic that extends to the base of the bottle and attaches to the removable lid. The stick is responsible for measuring liquid content and holds the battery unit, as well as a small LED. 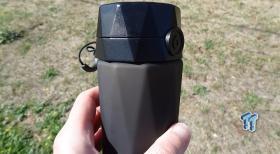 Setting the bottle up is as easy as can be, even if tightening the wand as directed requires summoning almost superhuman strength, albeit understandably so to prevent water seeping into the battery compartment. Thankfully, the dual coin cell batteries will last several months with normal use, so it's not something you'll need to do regularly. Other than that, it doesn't require any other special usage; just remove the lid, fill to the line as marked and away we go.

The companion app, available for iOS and Android (version tested) are equally as simple to use. Creating an account is as straight-forward adding as much personal detail as you feel comfortable with (height, weight, and physical activity levels) but note that entering more information will invariably result in more accurate data. Digging deeper into the settings menu reveals a plethora of options for more interaction with the bottle, which will please those who like to tinker with their tech (if you're reading TweakTown, odds are that's you). You'll find several options from mobile push notifications which offering gentle harassment, to a none-too-subtle multi-colored glow notifications that emanate from within the bottle, which is all in service of encouraging you to increase your hydration.

A minor annoyance I found is that the bottle does not automatically sync in the background, so you'll need to manually open the app with the bottle in Bluetooth earshot to update the stats. However, the bottle will remember the last two days of data, so if you leave it for a while, it's not really a huge problem. Overall, I found that its core functionality; the logging of water consumed to be pretty darn accurate, with only a few instances where I suspect that it was off by a 100ml or so. 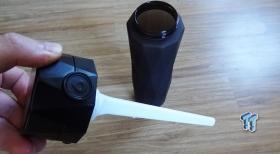 Returning to Fitbit, the Hidrate Spark app dovetails quite neatly with the Fitbit app once you approve the appropriate permissions. So rather than needing to manually log the amount of water each day, it will send that through. Not only that, but Hidrate Spark will also pull data from the Fitbit to inform your daily goals. For example, if you've had a particularly vigorous workout, Hidrate Spark will increase your hydration goal accordingly. It's a nice bit of extra data manipulation that actually adds value to both devices. Hidrate Spark's app will also play nicely with Under Armour, Google Fit, Withings and Jawbone Up (rest its soul), but these have not been tested. 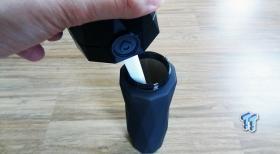 After a few weeks with the bottle, I'm glad to say that the Hidrate Spark has somewhat successfully changed my habits. I'm actually drinking a lot more water (albeit far from my personal recommendation of around 2.5 liters daily) which is also substituting for my soft drink habit. In making it into a game - a challenge to be 'won' daily, Hidrate Spark helps to normalize the act of drinking water for those who might be a bit reticent. Like me, you might also find that it doesn't actually taste too bad, after all.

The Bottom Line: It's probably the most expensive water bottle you'd ever want to buy, but if you're on the lookout for some healthy living accessories to accompany your fitness wearable, the Hidrate Spark is a fairly good choice.