Civilization VI changes just enough to warrant another full game in the series. The changes fit the style of game well and it still remains the best 4X strategy game around. 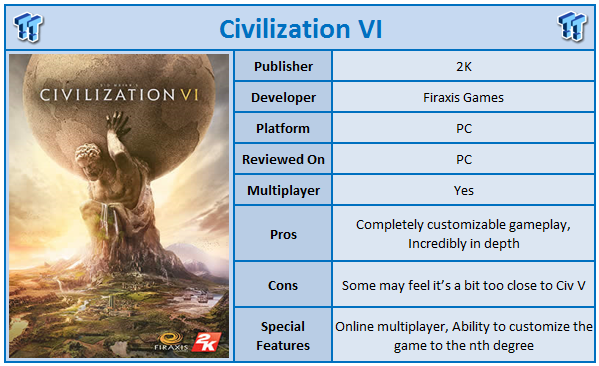 Just one more turn. It's the catch-cry that has defined the Civilization series since its early beginnings with basic graphics and some of the most advanced strategy elements that were around in the nineties. Civilization has been responsible for sleep deprivation the world over and with the game now into its sixth iteration, it's time to ask for just one more turn from the world before turning in for the night.

Yes, Civilization is back, and it's as addictive as ever. It remains one of the largest scope video games in history, and there is not much out there that compares, so five years after the last time around (discounting the disappointing Beyond Earth), how does the game stack up? The answer is very well indeed. Get ready for sleep deprivation because the world's best strategy game is back with aplomb.

Civilization for the few of you who may not have encountered this colossus series puts you in charge of taking a world civilization and building it up into a thriving society complete with research, culture, and military tasks. It is up to you to ensure the survival of your civilization by brokering peace deals, advancing the world's technology, and in general, just keeping everyone on the map happy - and that sounds easier than it is. Tough decisions need to be made, and that is what makes Civilization such an addictive game. A decision you made 40 turns ago, might be the one that turns the tide of the battle. All the while you sit there muttering, just one more turn. 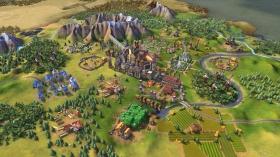 The general construct of the game remains the same for its sixth iteration, as you would expect. You can choose to either start a quick game and let the game decide what options to turn on, such as win conditions, or (in our opinion the more preferred method) you can setup a game to your liking, such as how many enemies are on the map, how big the map is, and even what age that the game begins. Don't want to research all the way up to modern day? Just start the game in the information age, and you will have access to some of the world's most advanced military without researching it. However, of course, the beauty of this game lies in taking a civilization from scratch through the many ages to become dominant over some centuries.

While the main game, for the most part, remains the same; there have been some significant changes which will see you having to use new strategies to become a master. When building cities, you can now build new structures only in particular areas. For example, you now designate hex areas as areas for specific needs of a city. One part of the city might be dedicated to building up the military presence, while another area might be for neighborhoods. This does change the game up quite a bit as you can no longer just build cities out and instead need to think about where it will all fit together.

There are also other fundamental changes to units present within the game. For example, builders can now only be used three times before exhausting their workability. It's no longer a strategy just to use one type of builder constructing everything, and this, of course, eats into your treasury and time. If you find yourself in a pinch and desperately needing a unit to defend a town, or build something, as long as the treasury has the dollars, you can purchase units directly. Overall in this regard, Civilization VI is familiar enough to lure you back in, while changing just enough to justify another upgrade to the series. 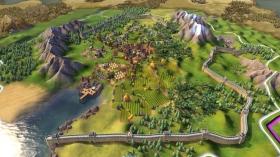 The other major task you will undertake in Civilization VI is researching technology. One new change to the game is that units you have already built or will build during the research phase can speed up the process.

For example, if you are researching something such as new weapons, defeating a few enemies may speed up that research by a few turns. This is an interesting new twist on the research system and means it is no longer a situation where you click a research task and then forget about it until it's done. 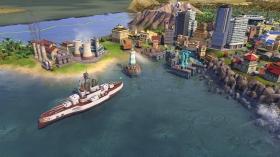 The research tasks have also been split into two. There is now the typical technology tree, but also the Civics tree where you can research cultural improvements to your civilization. This is the key to winning via the culture victory option. Civics is where you can unlock different types of government structures such as democracy and this, in turn, will dictate what policies you can apply to your people. These policies come with various bonuses, so structuring your policy to fit your winning task is key to victory. This certainly seems to make the cultural victory more achievable than before, however, in our play time, we were unable to complete a cultural victory (we completed the domination and science win conditions). One of the quirks remains in Civilization, and that is when using the democratic government, you never have to face a vote to keep your job. So, it does not go all the way in that regard.

The Civilizations present within the game has also expanded with many more options now on offer. The civilizations are also represented by some of the world's most famous leaders such as Queen Elizabeth of the British Empire and Cleopatra from Egypt. These leaders are all animated with full 3D models and are now a lot more vocal with their likes and dislikes about your civilization's progress. If you begin to discover more in a shorter period than some of the civilizations, the leader will warn you that you are progressing too fast for their liking, but at least in the playthroughs, they turned out to be bluffing, and no war was started.

One of the improvements that will be welcomed by new players is an improved tutorial. Even though we had played through many Civilization games, we played through the tutorial, and it does an excellent job of introducing you not only to the game's mechanics but also what has changed for Civilization VI. One of the biggest problems these games have always had is a very high learning curve, but the tutorial will cure most of those issues - it's a huge improvement this time around. UI changes from the previous game also remain with data such as the probability of victory during wars, always available on the screen.

Multiplayer returns to Civilization VI, including some unique options such as the ability to play hot-swap (that is, two players on the one PC taking turns). There is also the ability to customize multiplayer games to the nth degree. For example, if you are a Civilization VI veteran, but your friend is just getting into the game, you can set different difficulty levels for each player. There are also other changes in multiplayer to speed the game along including reduced animations, and game modes that focus on getting the job done, as opposed to marathon sessions.

Visually some players may feel that the game has gone backward with its cartoon-style look, but we think it fits the game perfectly. It is a gorgeous game, and one of the visual highlights is how the undiscovered areas of the map look. We've come along from the black hole in the first game, and the undiscovered area now appears as parchment much like you would except on early explorer maps. It is a visual feature that pops out of the game and works perfectly. 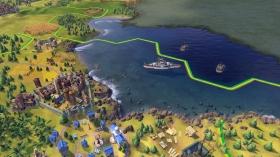 The units are animated well and being able to zoom right into the face of battle as well as out to a very high view, without the game breaking a sweat, allows you to enjoy the graphics that Firaxis has included. It's also easy to tell just by looking at a city how it is structured which can assist when coming up with war strategies. Perhaps the most impressive piece is the world wonders that are featured and can be built by civilizations. These are built from scratch in a lengthy animation once they are unlocked, and all are worth watching.

Civilization VI is yet again a masterpiece from Firaxis. Beyond Earth was a blip in their track record but they have come back strong with this one. The addictive nature of the game is retained while introducing new options that change the game just enough to make it feel fresh enough for a brand-new game. If you are a strategy fan and have a hankering for some turn-based strategy, this is by far the best one out there, and likely to be so for a few years. Civilization has returned, and now it's time for just one more turn.

The Bottom Line: Civilization VI changes just enough to warrant another full game in the series. The changes fit the style of game well and it still remains the best 4X strategy game around.