Anyone who follows our RAM reviews knows just how well we liked the original TridentZ release with the red, gray, and black color theme, and the performance that kit was able to deliver. The thing is, however, not everyone has a rig that accommodates red as the bold splash of color. So what does G.Skill do about such things? They incorporate new color options into their lineup. This time, both sides of the heat spreader are gray, but the plastic insert of color can be selected from black, white, orange, and yellow at this time.

Our last set of TridentZ memory was a 16GB kit, and as such tended to clock pretty well, and delivered some of the best results we had seen at that time. What sold us on the design was that even though at that time pricing was higher across the entire market, the attractive and unique design of the new TridentZ was some of the best we had ever seen. Considering the white Trident X memory we have today is 32GB in density and requires populating all of the DIMM slots, we expect it to not have as much leeway when it comes to overclocking. However, they should still manage to compete and hopefully show us a reason to buy such a pretty kit for something other than looks alone. 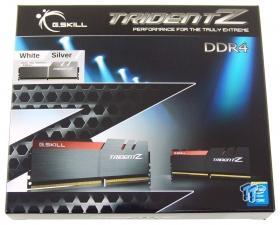 The packaging is identical to that of the initial release of TridentZ RAM, with one minor exception. This time, along with the image of the original design, the Z shape in the background, and the DDR4 and support for Intel processors, we see a notification that this kit is made of silver spreaders and a white accent strip. 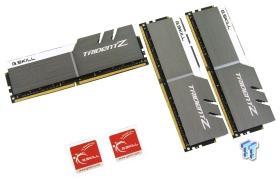 G.Skill kept the hairline finish of the heat spreaders, both silver now, and they sport the TridentZ name on them to the right. The top bit is now made of white plastic, and from this angle, we see the G.Skill name printed on them in black. 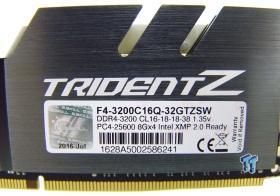 The look of the hairline finish is top notch, and being set on black PCBs gives them a nice finished look. On the reverse of the sticks, under the TridentZ name, there is a product sticker added. This informs us that this kit will run at 3200MHz, using 16-18-18-38 timings, and 1.35V when the XMP 2.0 profile is enabled.

Even from the top of the TridentZ RAM, the name G.Skill is front and center of each stick. Both ends of the three fins are silver, this time, around, and just like the originals, are indeed something special to view when installed. While we again were unable to release the heat spreaders, via software we found that this is Samsung based as well. 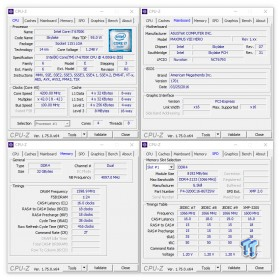 Upon initial boot of the TridentZ, we can see that everything is in order. All 32GB of RAM is recognized, and it is running at essentially 3200MHz, and the timings are all correct as well. On a side note, we also noticed the tRFC is lower than what we saw on the Vengeance LED kit. 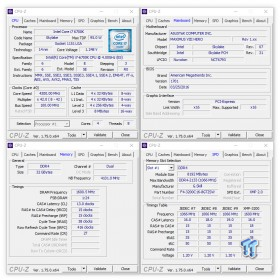 Lowering the timings with a bit of extra voltage to the VDIMM setting did allow us to drop things a fair bit. Ending up with 13-15-15-38 2T stable as can be, we are pleased to see some flexibility in these ICs. 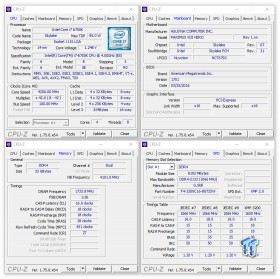 Our attempt at raising the speed was cut short relatively soon. We found that 3466MHz was all this kit would offer when used in the four stick configuration. Of course, we could have done better with fewer sticks, but this seems to be on par with the average sticks on the market. Not great results, but hey, at least there was something left for us to show you results. 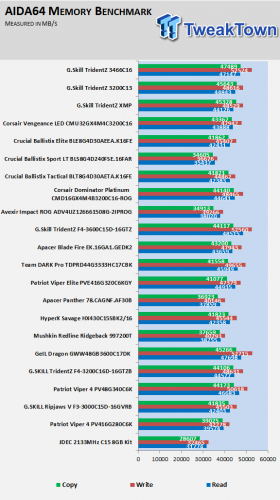 With AIDA64 showing us raw bandwidth, we see that only a select few kits can keep up with the XMP profile of this 3200MHz kit of TridentZ. The Corsair ROG sticks are close, and we beat the 3600MHz TridentZ kit - we see robust and strong performance from these sticks. Of course, when you tweak this RAM even so slightly, there are jumps in performance to a level that does top our chart. 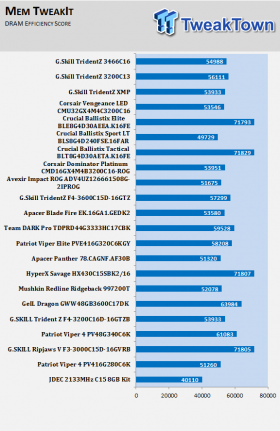 Along with anything that is not 3000MHz in speed, the 51000 to 53000 is what we expect to see at 3200MHz, and this kit comes in at the high-end of this range. Timings do help a lot with the efficiency rating, and the speed beats the XMP profile but lowered timings win the day here. 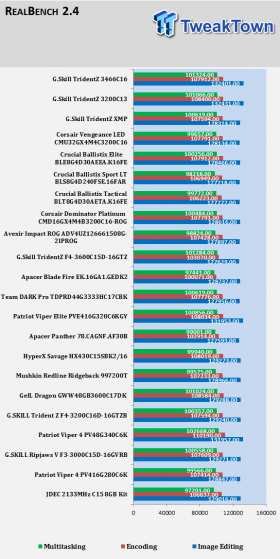 RealBench shows us that the XMP profile delivers performance equal to other kits, give or take a little bit here and there. Lowering the timings or increasing the speed ends with similar results and not distinct advantage either way, but considering that more density is typically a touch slower, this 32GB kit of TridentZ does very well for itself.

32GB may be more than you need, and G.Skill offers all of the speed levels and timing sets across an entire lineup for 16GB in density as well, the major difference being that this 32GB set filled all of our DIMM slots and as such comes with a raised tRFC. Performance between them should be pretty close, but what will win the masses with sticks like these, is the color options. There is the black option which will go with anything, and the same can be said for the white variant too. But outside of the red option, we saw initially, there are yellow versions for MSI motherboards and some of the ASRock lineup, and even orange to go with GIGABYTE motherboards. G.Skill has filled the gap that may have eliminated customers from the original offerings, and now delivers a custom feel to their choices. 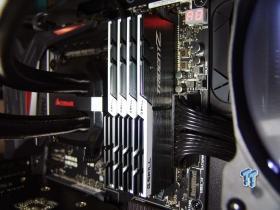 Almost everything we loved about the originals is still present in this design. From the performance to the flexibility these kits can afford the end-user, even down to the majority of the looks, the TridentZ series of DDR4 is still some of the best-looking sticks on the market. Now both sides of the RAM matches, both now found to be silver, and the option to select one of four plastic accent strip colors allows anyone to appreciate this design now. This set of TridentZ memory may not be the fastest we have tested, but it was able to surpass faster sticks in our charts when overclocked. We feel that the new TridentZ DDR4 RAM is still just as sexy, and willing and able to easily be used with good results, requiring very little from the end-user to obtain it.

With no mention of pricing from the manufacturer offered to us directly, we opted to hunt the internet for them. Here we found that this F4-3200C16Q-32GTZSW memory is available but in limited locations. While Amazon shows nothing but the original red option in this speed and density, we did locate all color options at Newegg. There you will find any of the 3200MHz 32GB kits to be priced at $179.99, no matter which of the four colors adorn the top of them. Directly comparing them to the Vengeance LED set we just looked at, the price here is less, and the performance overall is slightly better for G.Skill as well. While this kit does not support any LED functionality, they do prove that looks are in the eye of the beholder. While both kits have their aesthetic merits, we do tend to favor those who perform better, especially if they can be had at a more affordable price point. This is why we feel these new Trident Z DDR4 kits with optional colors are the way into the everyman's heart, and could easily be the sticks of choice at this speed and density.

The Bottom Line: More affordable than competing kits, performance to best them, and color options to now match any motherboard makers theme, these G.Skill TridentZ kits are still an all around favorite of ours!