A little over a year ago, we had the opportunity to take a look at one of the first iOS storage solutions to hit the market in the SanDisk iXpand. While this drive was aesthetically pleasing, the performance was subpar thanks to its USB 2.0 interface. Now SanDisk is back with a completely redesigned solution carrying the same iXpand branding.

The all-new iXpand flash solution brings a much slimmer appearance when compared to its predecessor, but capacity options haven't changed. With this solution, we have consumer-friendly capacity options such as 16, 32, and 64GB along with a top capacity unit with 128GB for those that need extreme storage. With this launch, SanDisk has also cleaned up the iXpand application for iOS as well which we will take a look at that shortly.

Compatibility extends to Windows and Macs along with the iPhone 5+, iPad 4th Gen, and iPad Mini. MSRP of the 64GB iXpand from SanDisk is listed at $89.99 with a one-year warranty. 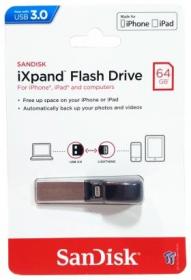 Packaging is pretty standard for the drive; capacity is at the top right with minimal marketing on the front. 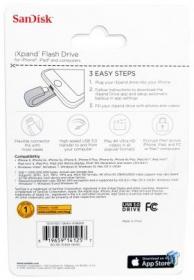 The backside gives a quick tutorial on how to use the drive with a bit of marketing info below followed up by compatibility. 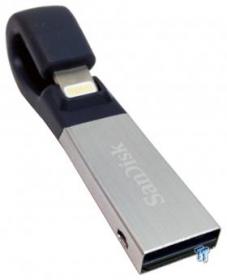 Above, we have our first look and as I stated before a much slimmer profile for this solution. The main body of the unit houses all the storage bits while a scorpion tail holds the Lightning connector. 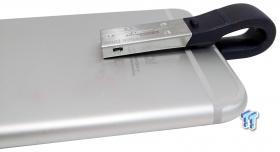 Here we have my iPhone 6 with the iXpand connected. 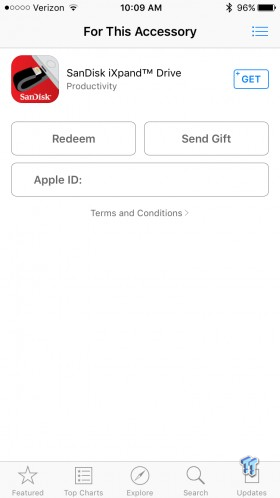 The iXpand app in the App Store freely available. 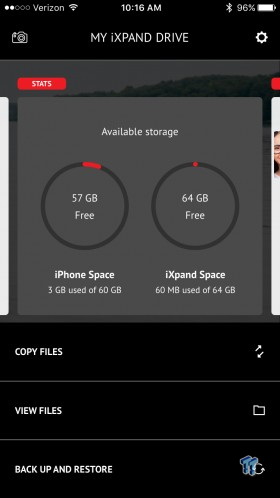 Diving into the app, you get a few screens wanting you to automate everything from backup up your camera roll, to backing up your contacts. At the bottom, you have access to file copy operating along with the ability to view them. In the center, there is a sort of rotating image that shows you the capacity of your phone and the iXpand. 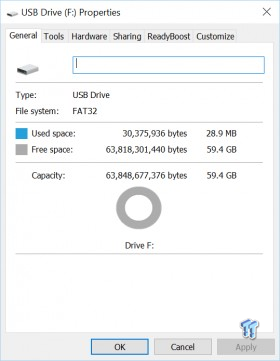 The 64GB SanDisk iXpand is factory formatted with the FAT32 file system. Usable capacity comes in at 59.4GB. 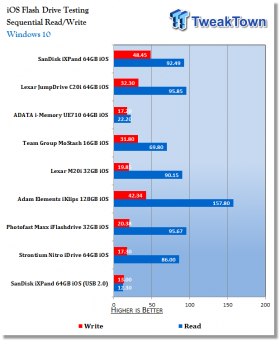 Diving into some testing, the new iXpand did markedly better than the previous solution. As a matter of fact, the new iXpand is one of the top iOS drives on the market regarding performance. 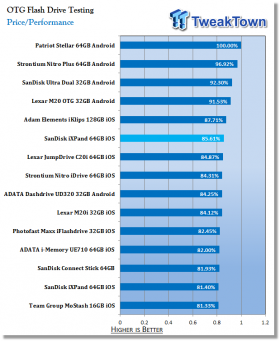 The new SanDisk solution landed at 85.61% but even better than that moved its way from being one of the worst iOS drives with the previous solution, to second only to the iKlips from Adam Elements.

The first few times I connected the iXpand to my iPhone 6 there was quite a bit of tension between the Lightning connector and the main connector pressing on the back of the phone. I'd say after 10 to 15 connections, it loosened up quite a bit, but you do have to be careful not to overextend the "scorpion" part of the iXpand, or you lose the tension that holds the drive in place. With that said, build quality is solid and up to standards for a SanDisk solution.

The performance of the SanDisk iXpand was fantastic and much improved over the last generation. In testing, I was able to get 92 MB/s read and 49 MB/s write, which is just a touch faster than the C20i from Lexar and just a few MB/s behind the iKlips. Price/Performance put the new iXpand at 85% for all OTG drives, but looking at our iOS solutions alone, the iXpand is second to the iKlips by 2.1%.

Overall, the iXpand is a much-improved package with a 300% improvement in write performance and a touch over 600% in read performance. SanDisk has cleaned up their app as well making it more streamlined and automated if you so wish to use that feature. Also, you can use the Secure Vault from SanDisk, a second application that allows you to configure 128-bit AES encryption.

The Bottom Line: SanDisk's iXpand in its second iteration is a solid, high performance solution for iOS users. On the downside, it carries a price point well over $1 per GB, making it one of the more expensive solutions.