As soon as the news blast went live for this kit, we were immediately sending an email off to Apacer to request this RAM. It took a bit from the news blast until they actually shipped, but our request to get 32GB of this memory was filled so that we could test out performance across all four RAM slots on our Intel Z170 motherboard. We know that Apacer has been on the ball when it comes to solid memory and delivering it wrapped in some of the more stylish heat spreader designs we have seen in our testing, and this time, we find exactly the same.

Our test samples consist of two EK.16GA1.GEDK2 kits, with 16GB in each kit. These single sided sticks were delivered with a speed of 3200MHz, sporting timings of 16-18-18-38 2T, and use a maximum XMP voltage of 1.35V. The Blade Fire, as Apacer is calling this kit, and rightfully so, as the design here uses a K-Bar knife design, with the cutting edge highlighted across the spreaders, and the back of the blade is illuminated, lending to the fire portion of the naming.

While these kits can be found in lesser densities, down to 4GB kits, and with slower speeds, starting at 2400MHz, we thought we would go with the best of the Apacer Blade Fire series. The illumination, the LED heartbeat as they call it, does not stay on all the while this kit is in use, but flashes when the individual stick is being used, very much like the older Crucial Tracers used to do. The heavier the usage, the faster each stick will flash, but this kit does put on a very slick looking light show inside of your chassis none the less. 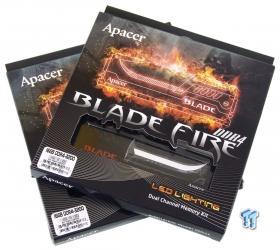 The packaging is very busy. The Apacer name flanks the top, with a guy in a mask placed behind the Blade sticks, completely engulfed in fire. The lower half offers the Blade Fire DDR4 naming above a window to see the side of the heat spreader, and we also see the product sticker at the bottom left, and a mention of the LED lighting of these dual-channel kits. 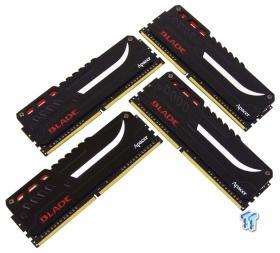 With nothing to block the view of the design, we can easily see the military knife inspired design, with the handle above the Blade name, and the cutting edge of said blade made of exposed metal to contrast the rest of the embossed knife. We also like the red on black aesthetics, and the black PCB keeps that look continuous. 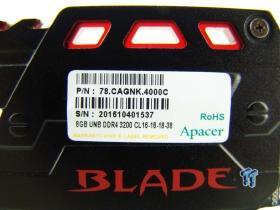 The obverse of these sticks is exactly the same, down to design, naming, and even the exposed metal cutting edge of the knife blade. What we do find here, is that Apacer places a product sticker with the individual sticks part number not that of the kit, its serial number, as well as its individual density and timings.

The Blade Fire RAM is designed with a red plastic top that conforms to the shape of the heat spreaders on either side of it, and this is what will illuminate once in use. These use a pair of LEDs in four locations that all glow at once, but only while that stick is in use, then the LED lighting jumps to the next stick in line. 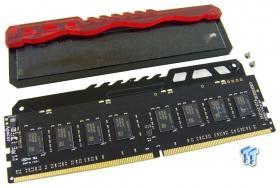 If, for some reason, you don't have the room for the full height of these sticks, the heat spreaders are easily removable by removing a pair of screws, one at either end. This takes the 46.2mm tall memory down to 33.5mm, but at the same time, we are certain it will void the limited three-year warranty as well. 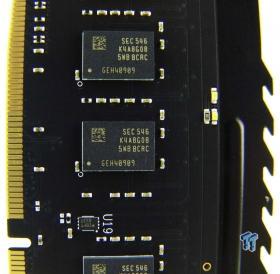 Unlike the Commando and Panther RAM we have tested, being based on SK Hynix ICs, when it came to building the Blade Fire kits, Apacer chose, this time, to offer them with Samsung ICs. Both have their merits, but we have had better luck with Samsung based kits in the past. 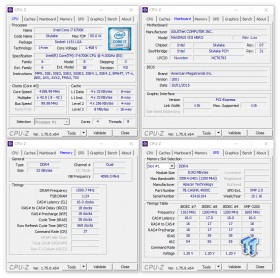 Booting the Blade Fire sticks with the XMP 2.0 profile delivered the exact specs the packaging tells us we would have running. We can see the 3200MHz speed, or just short of it due to BCLK deviation, and the timings are 16-18-18-38 2T. The only thing to point out here is that the tRFC has jumped to 560, due to the density of the kit. 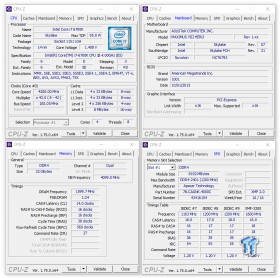 Then comes the slight addition of voltages to see where we could take the Blade Fire kit. Using 1.4V to the memory, and no increase to VCCIO or VSA, we were able to drop the timings across all four sticks to 14-16-16-38 2T. We did try 1T command rate, but could not get it stable. 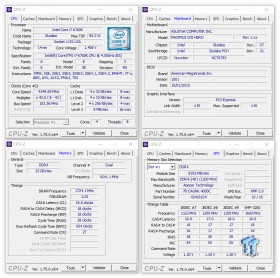 When it came to raw speed, we kept the VDIMM voltage at 1.4 but did have to tinker with VSA and the VCCIO to get to the 3448MHz with XMP timings. The 3400 Strap booted fine, but to increase past that point, we had to drop the memory strap and start using the BCLK to get to this final speed seen here. 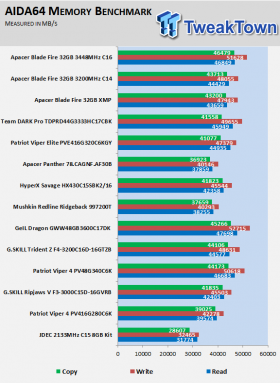 Benching with AIDA64, we find that the XMP profile results are better than most kits of the same speed, and even outperforms some of the faster kits on the chart. As we lowered the timings, or as we increased the speed, we were delivered better results in performance, and the Blade Fire came very close to the best results on this chart. 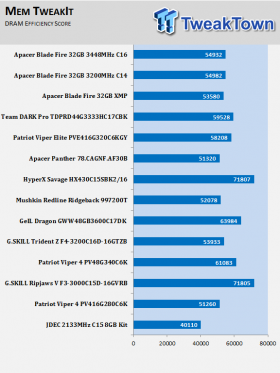 MemTweakIt did not seem to appreciate this kit all that much. There are many kits with better results in this test, and even those that were slower seemed to perform much better than the Blade Fire kits did. Of course, this is just an efficiency test, and with the results in AIDA64, and the RealBench results to follow, we get a better perspective of what the Blade fire is truly capable of. 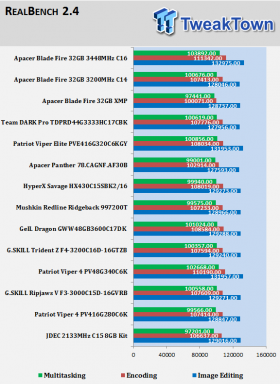 RealBench sheds a lot of light on the Blade Fire memory. Using the XMP profile, we see that it only edges out the JEDEC performance at the bottom of the chart. It isn't until you lower the timings or increase the speed that this kit comes to life. Once overclocked in either fashion, the Blade Fire RAM performs admirably against the other kits listed on this chart. 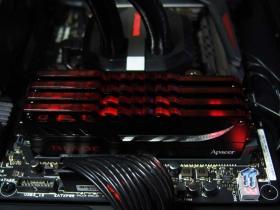 The Apacer Blade Fire kits look amazing once installed, and the stickers on the sides are hidden from view. As they were powered up, the lighting comes to life, as one stick lights up, and then it moves on to the next stick being accessed by the CPU. In the photo above, we caught the LEDs shifting from the third DIMM to the fourth, and the heavier the demand is on the memory, the faster the LEDs will flash between all four sticks. We also love the way that this Blade Fire kit matched the theme of our ASUS Maximus VIII Hero motherboard, and the exposed metal cutting edge of the knife sticks out.

Testing was hit and miss, to be honest. This Apacer RAM set did very well in AIDA64, flopped in MemTweakIt, and using the XMP2.0 profile for RealBench, results were not all that great there either. However, if you have the ability, or the urge to tinker with the clock speeds or timings, which seemed to really bring this kit to life, delivering some of the better results found in our charts. Of course, most of the XMP profile lackluster results were due to the density of this kit, and the fact that the tRFC is so high, along with other tertiary timings being increased to stabilize 32GB of memory. The reality of kits like this is that when it comes to this amount of memory, you aren't looking for blistering performance, as you need reliability to use this density in CAD work, virtual machines, and so on. Considering all of that, we cannot abuse this kits performance in our results in the same manner as we would an 8GB or a 16GB kit.

All in all, the design is on point, the lighting is nice to watch and adds a bit of bling to the build, and we had not one issue with anything we tried to make this kit do for us. Right out of the box, this 32GB kit booted right up stable, and with just a slight increase in the voltage, we were still able to get a fair bit more performance from it. In all honesty, we did not expect to be able to drop the timings as far as we did, nor did we expect to be able to add over 200MHz in speed to them. But Apacer delivers an aesthetically pleasing kit that anyone will like, and still left room for the tinkerers out there to gain every bit if performance of the lesser density submissions were able to deliver. What is going to stop most customers, however, is the pricing. At $125.99 per 16GB kit at the time of writing, the Blade Fire from Apacer is at the top of the price range, and many other kits are $30 or more cheaper, and most offer better timings as well.

The Bottom Line: Apacer's Blade Fire kits are eye catching, and the flashing of the LEDs is a nice addition to any build! However, the 32GB performance, and pricing, may keep a lot of customers from buying this kit. There are just too many more affordable solutions out there.