G.SKILL was not going to leave us hanging by just sending over the Ripjaws V. They also sent along their top-tier series as well. Anyone who has had the pleasure of buying G.SKILL RAM in the past has likely seen or used the Trident series of memory, and in our experience, they always delivered solid XMP performance and every kit we have owned in the past offer headroom for quite a bit of tinkering with them as well. While we may come off as a bit of a fanboy here, the reality is that once you find a company that does not disappoint, you tend to stick with them, it is that simple.

Back on topic, though, we are here today to have a look at the latest in the Trident line of memory as we have a go with the Trident Z F4-3200C16D-16GTZB that G.SKILL has provided us. Keep in mind this lineup offers a full range of speeds as well from 2800MHz on through 4200MHz, so you can choose what fits your needs. This 16GB kit in two sticks that we are looking at sports an XMP 2.0 profile that has them running at 3200MHz with 16-18-18-38 2T timings and requiring 1.35V to do so. This kit also sports a limited lifetime warranty, so as long as you do not remove the spreaders or the stickers if your kit were to fail you have plenty of time to RMA them.

What you are about to see is in our opinion the best-looking Tridents to ever roll out of the G.SKILL warehouse. We realize that aesthetics is the biggest selling feature when choosing components, and G.SKILL provides style in spades. Not only does this kit look amazing, but it also has the power to back up the look as well. This kit is strong out of the box, and you are going to see some impressive timings and speeds from this kit, the fastest speed to date by the way. While we have been impressed with dual-channel DDR4 in general and the route taken, you are about to see what we would consider the full package deal. 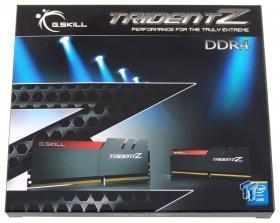 Even the packaging grabs your attention. Spotlights near the top shine down on two sticks of Trident Z memory as a large Z zigzags its way through the backdrop. We also see this is denoted as "Performance for the Truly Extreme", and is shown to support Intel Core processors. 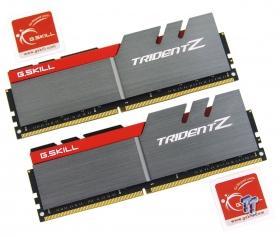 With this kit, we found a pair of case stickers, but what sits between them is some of the slickest looking memory on the market. The bright red top with the G.SKILL name plays so well against the grey brushed aluminum on this side sporting the Trident Z naming to the right. We are also really liking the simplified fins at the top, and the use of black PCBs was a must with this design. 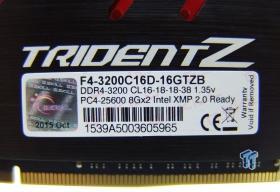 On the reverse, just under the Trident Z name, we find the product sticker. Next to the hologram is the F4-3200C16D-16GTZB part number, and its rated speed, timings, the voltage for the XMP 2.0 profile. 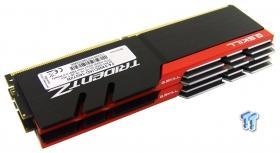 When looking down at the top of the memory sticks we see G.SKILL printed in the middle as the red trim crosses sides, and this side of the memory is also black, not grey. This mix of grey, red, and black is just so hard not to appreciate, we have not one issue with the heat spreader design and looks.

The freezer trick did not work for this kit, so we went to software to verify the ICs and were shown this kit is also Samsung based. Also, it should be known that these sticks are 44mm in height, and with no removable parts, room needs to be left with the cooler choice. 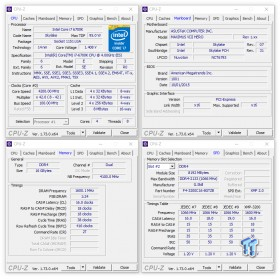 Powering the PC, jumping into the BIOS, and enabling XMP, this image shows we are delivered everything we were promised on the box. The BCLK remains unchanged, and this kit gets right to 3200MHz without issue at the timings we expected to see. 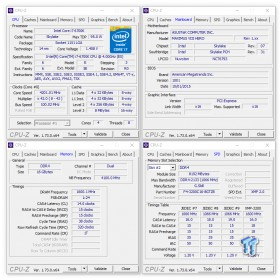 Lowering the timings is pretty straight forward, but they did require 1.45V to get here. We are still moving along at 3200MHz but were able to take timings down to 14-15-15-38 1T. We were very close to running straight 14 timings as well, but the voltage needed was too much for us to feel good about it. 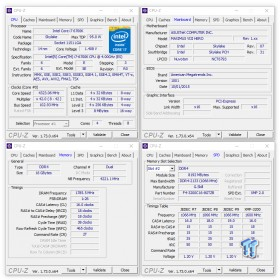 While not as impressive as a jump in speed as the Ripjaws V provided us, to get nearly 400MHz more out of this kit was impressive. We ended up with a final speed of 3570MHz fully stable but again required 1.45V to obtain this speed. 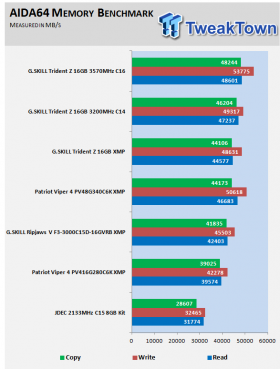 AIDA64 shows us what we would expect to see. The slightly faster Patriot Vipers do a little better than the XMP of this kit, and the Tridents are ahead of everything else. We also saw gains in both lowering the timings as well as raising the speed, where the speed wins out overall. 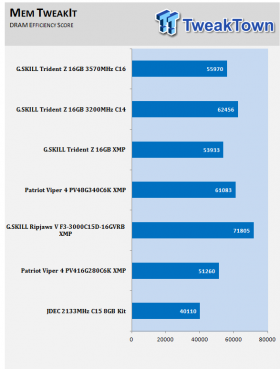 As far as efficiency is concerned in the digital eyes of MemTweakIt, again the Trident Z's place right where they should. Outside of the Ripjaws V kit, this fits between the 2800MHz kit and the 3400MHz kit in XMP runs. Lowering the timings puts us at previous 3400MHz results that are the best of the bunch, where again the speed seems to take a hit in this test. 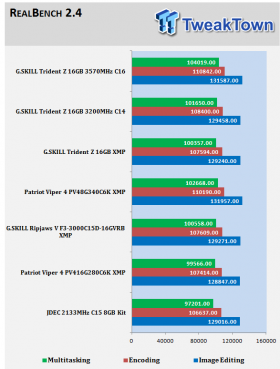 As far as XMP testing is concerned, the Patriot Viper 4 and Ripjaws V kits do slightly better than this kit of Trident Z memory. While we expected ever so slightly better results here from the Trident Z kit, it is slightly better at multitasking, and once we tinkered around with the kit, scores favored this set over the others in the chart.

As far as performance is concerned, this kit of Trident Z memory does fairly well throughout, and even when it does take a loss in a certain category. The difference is so minimal that the difference is not noticeable. Considering at some levels of testing it beats out the performance of another 3400MHz kit with less speed says a lot too. Like we said earlier, though, along with top end performance that can take on faster opponents and win out in the end, and it looks this good, G.SKILL brought forth the full package deal with this set of Trident Z memory. 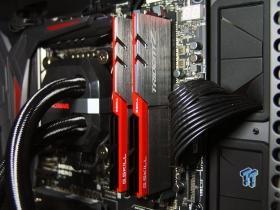 The only thing we can find wrong with this kit we were sent is that it did not come with a matching set to fill the motherboard. Two sticks look damn nice as it is, but populating all of the slots would make one huge block of sexiness to the right of the processor. The play of all the colors with our system matches both the red and black theme of the motherboard, but with the grey side, it also plays along with the new grey/silver accents on the Hydro series cooler as well. It is the perfect match to our specific build.

Looks and performance aside, though, we still have one major hurdle to cover; cost. You are going to find that some places out there want serious amounts of money, and offer up the F4-3200C16D-16GTZB at $161.55 with free shipping, but we would not spend that sort of money on this kit. We then ventured over to Newegg and found this set listed for just $129.99, again with free shipping. It is a bit more than the Ripjaws, but still much less than the Patriot kit it went toe to toe with in our testing.

With aesthetics, performance, and cost all covered, you can see why we have been calling this a complete package deal. The pricing isn't out of reach of the average system builder, the looks go with almost anything, and performance is on point, and even better than we expected at some points as well. Then, of course, there is the aspect of tinkering with this kit, where we took it down to really nice timings, and also offered us a new top speed that we hit with this kit of Trident Z memory. Any way we can spin it when purchasing a kit such as this, the result is going to be a happy user.

The Bottom Line: Super sleek and attractive design, a color combination that is hard to beat, and super solid performance! On top of that, they have more to give for the tinkerers out there. G.SKILL has completely impressed us with their Trident Z DDR4 dual-channel memory.