Since the launch of the 1999 found-film horror flick The Blair Witch Project which recouped $25 million during its theatrical run on a $50,000 budget (and went on to earn much, much from home video), studios have tried their best to offset huge budgeted 'event' pictures, with sprinklings of more economical, less star-powered horror pictures such as Saw, The Purge, and The Conjuring. But as happens with all things, a concept grows used and tired, and becomes in need of rejuvenation. Enter Unfriended - an innovative and topical horror film for the social media generation. 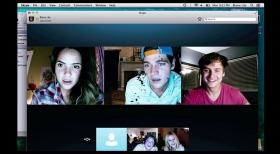 On the occasion of the first year anniversary of the death of high school student Laura Barns, former student Blaire (Shelley Hennig) converses with a group of friends over Skype, including with her boyfriend Mitch (Jacob Joseph Storm), before a mysterious and uninvited user 'billie227' find its way into the conversation. Unable to remove the user, the friends soon find their social media accounts compromised, which quickly generates fear and suspicion amongst the friends, as one by one their malicious streaks are laid bare and their part in Barns death are revealed. 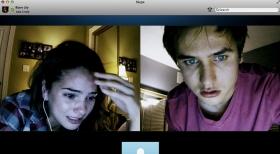 Taking place entirely from the confines of what could be the desktop of any teenager's computer, as the films opens, Unfriended is at first a little jarring, as social media programs and browser windows flip open with wild abandon as we peek into a sexually charged Skype conversation between the two lead characters. After a short while, the audience adjusts to the setup and shares a knowing familiarity with the experience - typing out a message while the mouse hovers over 'send', until a second and third version of the dialogue is broadcast.

The authenticity of this setup, reinforced by the licensed platforms on show - from Skype to iMessage, to Facebook and Instagram is the sole innovation of Unfriended, which lends an air of reality to the film which I perhaps wasn't necessarily expecting, but helps to ground the more outlandish elements into a sense of reality - a heady drama equal parts jealousy, teenage angst, sexual tension, and bitchiness. 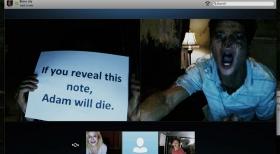 Sadly, any unique qualities that set 'Unfriended' apart from its forebears quickly dissipates as it falls back on the tried and true collective of horror clichés, including (but not limited to) fleeting glimpses of horror and blood splatter, loud thumping noises and a droning monotone score which foreshadows that something awful is imminent. The tension generated as the cast disappear one-by-one at the hands (spirit?) of Blaire never truly gets a payoff.

The cast of relative unknowns do a fine enough job of doing what the script calls on them to do, i.e. acting like kids unburdened by a sense of morality or common sense (as afflicts many teens), but no one's going to be winning an Oscar for their contributions.

Ultimately, for all the deaths seen and not seen, the worst, most horrible execution is reserved for Unfriended's clever and innovative concept which hasn't really been explored in a feature film before. But with a $40m box office take on a $1 million budget, (which reminds me - how on Earth did it cost that much to make this film? Surely it was sponsored to surplus by product placement alone?) something tells me that this isn't the last we'll see of Unfriended. 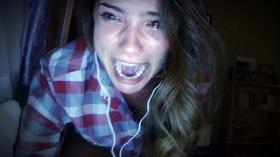 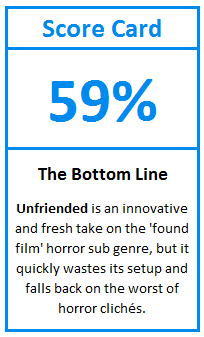