Strontium's Nitro iDrive is the highest performing iOS solution we have tested to date, but does lack a little in the app with its high price per GB.

With our review of our first look at Apple iOS capable flash storage, with the SanDisk iXpand now online, we had the chance to look at yet another solution in that same market segment. As with many storage markets, Strontium continues to release new solutions and today we check out the Nitro iDrive.

As the title suggests, the Nitro iDrive is an iOS-capable flash storage solution. Capacity options range from 16GB to 64GB solutions with marketing numbers of 85 MB/s read and write performance only being said as lower than 85 MB/s depending on your host device. Being an iOS capable solution the iDrive does feature the 8-pin lightning connector, along with the standard USB 3.0 connection.

As we saw in our review of the SanDisk iXpand solution, these iOS drives need the support of an application to work correctly. With that said, the Strontium solution too has an app called iFlash drive, which comes from the PhotoFast line up. MSRP of the Strontium Nitro iDrive in the 64GB capacity is set at $99.99 and features a two-year warranty. 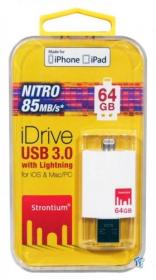 Packaging for the Nitro iDrive is rather substantial for a flash solution. As you can see, we have a full plastic shell protecting the drive. Capacity is listed to the top right with iOS compatibility listed at the very top. 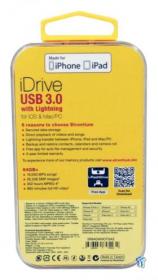 The back houses marketing information, along with capacity limitations. To the far right, we have a QR code for the app. 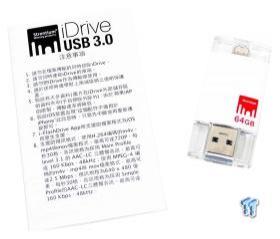 Scope of delivery is rather simple with just the flash drive and small pamphlet. 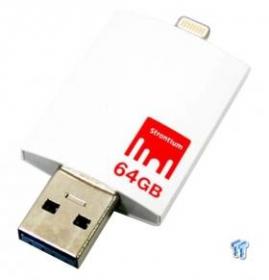 The Nitro Plus has a smaller footprint over the last solution we tested, the iXpand from SanDisk. They have also chosen to place a connector at each end of the flash drive. 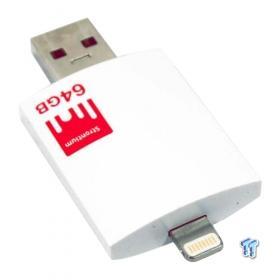 Above, we see the eight-pin lightning connector for modern iOS devices. 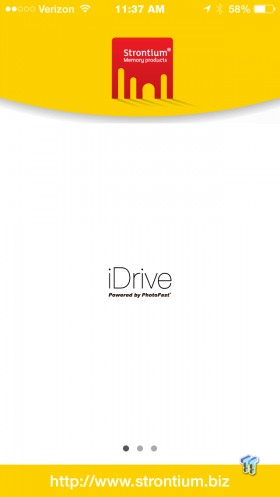 After downloading and launching the app for the iDrive, we were greeted by this splash screen seen above. 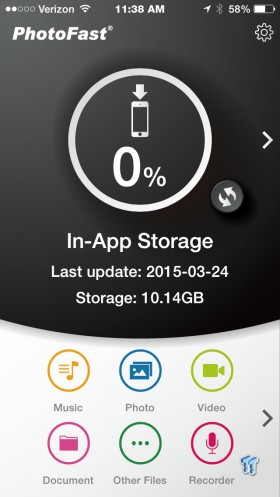 Once inside the app, everything is very simple and streamlined. Across the bottom, we have descriptions with the top portion of the screen denoting where you are looking. 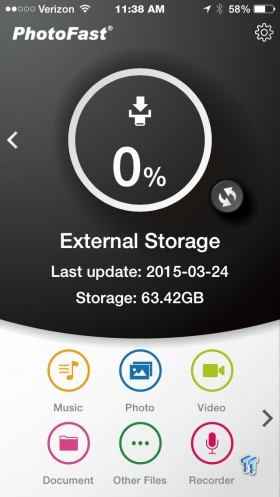 As you can see above, we have swapped over to the iDrive with 63.4GB of free space. From here, you can transfer files to and from your iOS device. 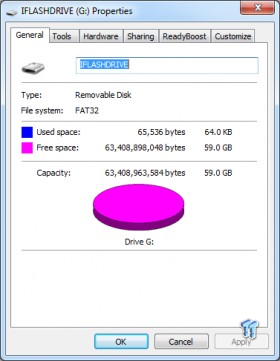 The Strontium Nitro iDrive is factory formatted with the FAT32 file system. This does limit file sizes to under 4GB. Useable capacity after formatting is 59GB. 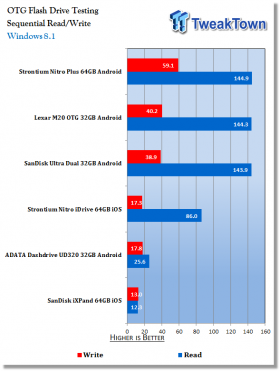 Starting off our testing, you can see just how quick the Nitro iDrive is. Here we reached 86 MB/s read with write at 17 MB/s. 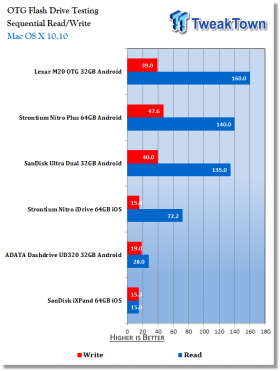 Over on the MacBook Pro, we connected up the iDrive and found we only received 72 MB/s read and 15.4 MB/s write. 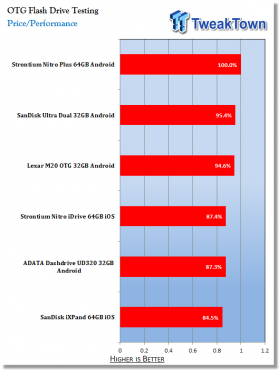 Price/performance of the iDrive put it right in the middle of the pack at 87.4%, three percent over the only other iOS solution from SanDisk.

With this being our second look at an iOS capable storage solution, I am certainly glad to see Strontium used the USB 3.0 connection on the drive. This drastically cuts down on the transfer time between the drive and your PC. Moving on, I found the build quality of this drive to be solid, but the capped design does mean there is a risk of losing the provided protection of your ports, especially when there is no included way to tether them to the drive itself.

Performance of the drive is substantial with read numbers upwards of 85 MB/s. However, like the previous solution, write performance is at the lower echelon of what we would expect. Another denominator of the drive's performance comes with the app. With the SanDisk solution we tested, I was very pleased with how well the app was laid out and the features. With the Strontium, the app is just a straightforward solution to allow you to transfer data between your devices, no frills, so there is some work to be done to add to the package as a whole.

Overall, the Strontium Nitro iDrive is the better performing iOS solution at this point in time, but the price is upwards of $2 per GB. With that said, the iFlash drive app is ample enough to get the job done, but could use a little more on the features side.

PRICING: You can find the 64GB Strontium NITRO iDrive USB 3.0 for iOS, Mac and PC for sale below. The prices listed are valid at the time of writing, but can change at any time. Click the link to see the very latest pricing for the best deal.

The Bottom Line: Strontium's Nitro iDrive is the highest performing iOS solution we have tested to date, but does lack a little in the app with its high price per GB.