With just one previous picture to their credit; the low budget thriller Bound, the Wachowski Brothers (now just Wachowskis) became Hollywood's darlings overnight on the back of The Matrix in 1999, a mind-bending leap into the new millennium with a compelling cyberpunk narrative and eye-popping visual effects that truly had never been seen before. Since the trilogy wrapped up, they've gone on to deliver two ambitious (some would say indulgent) pictures; Speed Racer, Cloud Atlas, and now Jupiter Ascending. None, including the latter, have set the box office alight, posting million dollar losses in production and marketing costs and have all been (to varying degrees) massacred by critics. While they're doubtlessly flawed in their own way, it doesn't necessarily mean they're bad - and that applies to their latest effort; Jupiter Ascending. 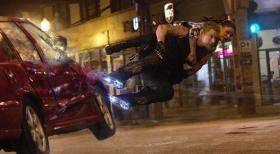 Unbeknownst to the denizens of Earth, the planet has become the property of the House of Abrasax, a powerful galactic dynasty whose domain includes countless other galaxies. Populated for the sole purpose to harvest humans into a life-extending serum for consumption by wealthy planets, Balem (Eddie Redmayne) bickers with his brother Titus (Douglas Booth) and Kalique (Tuppence Middleton) over the carve up of the family inheritance, following the death of the family matriarch.

On Earth, the attempted murder of the downtrodden and seemingly insignificant life of of Jupiter Jones (Mila Kunis) is averted by the actions of Caine Wise (Channing Tatum), a genetic wolf/human hybrid who reveals Jupiter's true destiny - the true heir of the planet. Claiming her birthright and in turn securing the future of the planet will require her to find inner strength and help from some some unlikely allies. 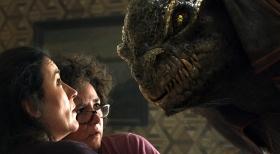 There's no doubt that the Wachowski's are excellent world builders. True, there might be a generous sprinkling of homages (read: borrowing) and historical stylings littered throughout every frame, but the universe they've created in Jupiter Ascending is truly a sight to behold. Short of a few poorly executed visual effects sequences, it's immersive, visually stunning, and entirely compelling. But as strong as its spectacle might be, it's nothing if there isn't a strong backbone to support it, and that's where Jupiter Ascending descends.

As a product conceived, written and directed by Wachowski's, Jupiter Ascending has a strong and singular vision throughout and never suffers the same fate as most Hollywood blockbusters, with all the tell tales signs of assembly line revisions from multiple writers. However, in this instance, a pass by another screenwriter would probably have cut down the length of time it spends bogged down tedious intergalactic bureaucracy, which attempts to emulate Brazil, but instead comes off as a bit too much Phantom Menace. 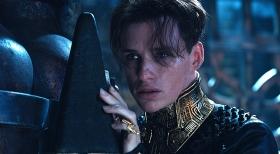 Channing Tatum is a solid lead, but he lacks that certain something to be a truly compelling leading man, at least in this performance. The filmmakers should have sought to channel Chris Pratt's irreverent and natural performance from last year's Guardians of the Galaxy to anchor the film and help it become a little more accessible. Also, if I'm being honest, I don't understand why you'd cast one of the biggest heartthrobs in Hollywood and go to the lengths to make him so... well, unattractive? I've previously singled out Mila Kunas' poor performance in the 2013 blockbuster Oz: The Great and Powerful, but I'm glad to say her Jupiter Ascending performance comes across very strong. Despite employing every villain cliché in cinematic history, I can definitely see why Eddie Redmayne won the Best Actor Oscar recently for his role as Professor Stephen Hawking in The Theory of Everything - he's a veritable on-screen presence without doubt.

In a time when rising budgets are making Hollywood increasingly risk averse and unwilling to gamble on new IP, it actually pains me to point out Jupiter Ascending's flaws, especially when its overseas release has sunk so horribly. But for its high concept, sumptuous design, exciting visual effects sequences and just sheer ambition, it's most definitely worth a look. 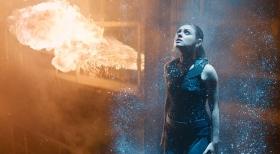 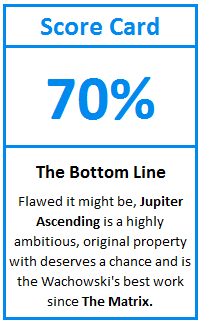