Just as the Vietnam war inspired generations of films including Apocalypse Now, Platoon and Full Metal Jacket, so too has this millennium's sojourns into Afghanistan and Iraq, with Jarhead, Green Room and The Hurt Locker proved the same in recent times. The latest, American Sniper, based on the memoirs of Chris Kyle credited as the deadliest marksman in U.S. military history takes a slightly different, more personable take on events, but nonetheless brutally affecting and which illustrates the emotional toll on US forces both during, and after the war. 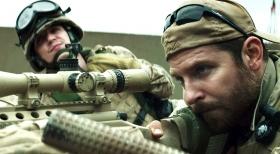 A salt-of-the-earth Texan native, Chris Kyle (Bradley Cooper) has ambitions to become a famous rodeo cowboy when he's compelled to sign-up to the United States Navy, following the deadly bombings of the US embassy in Africa. His talents and superior concentration make him a prime candidate for Sniper detail, with Kyle quickly recruited by the Navy's SEAL special operations force.

Shortly after meeting Taya Renae (Sienna Miller) whilst off-duty, which blossoms into a relationship, Kyle witnesses the September 11 terrorist bombing in New York, and knows that he will soon be part of a retaliatory force. Sent to Iraq for his first tour of duty, Kyle earns his stripes in often ambiguous situations, with his eyes and reflexes responsible for protecting ground forces below. As the war becomes protracted and his tour of duties multiply, Kyle becomes more detached from Taya and his expanding family, haunted by the compatriots he's unable to save. Years spent overseas not only make it harder for him to readjust to civilian life, but also exponentially reduce his own chances of survival, both physically and mentally. 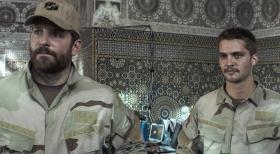 The more cynical amongst us might call out American Sniper for being perfectly timed to capitalize on the height of Oscar season, the kudos of which can mean millions more in revenue (not to mention feeding the egos of Hollywood's elite), but without doubt the film deserves its short listing for 'best picture' - if not the award itself. Whilst it might be dramatized and there's even suggestion that the events behind it might be a little fudged as well, this is a monumental effort of a compelling story, combining with authentic characterization and expert direction and staging.

From a long career in front of the lens, Clint Eastwood has managed to carve out an equally impressive career behind the camera, with two best director Oscars, multiple nominations and equal parts critical and financial success. American Sniper just might be his most dynamic film, not exactly what you expect from a director approaching 85 years of age. 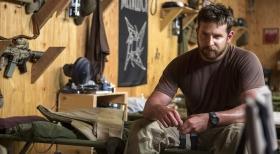 Bradley Cooper carries the majority of the weight on his shoulders, cutting an almost unrecognizable figure from the attractive playboy from American Hustler and an obvious departure from the wisecracks of the The Hangover trilogy. Unfolding through his eyes, the film's focus remains unwaveringly on Kyle, despite the sizeable cast of players, including the increasingly marginalized Sienna Miller and his SEAL colleagues including Luke Grimes and Max Charles.

Mirroring the ever-present left/ right divide of U.S. (and international) politics, much has been made of the film's portrayal of war, smearing it with a pro-war label and accusing the filmmakers of making Kyle's record kill streak into some ill-advised heroic badge of honor. I found this to be anything but. American Sniper is a monumental film which drives home the great sacrifices, including their own lives in the pursuit of justice and security which fails to halt even after the war has. 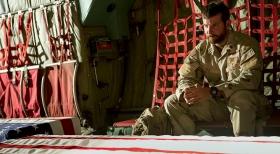 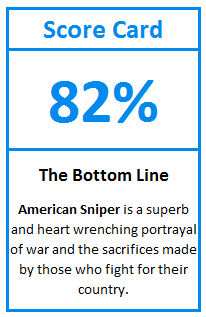