With Thunderbolt support now somewhat official as an interface for Windows PCs, the market is slowly jumping on the technology with a plethora of devices reaching the market. As Thunderbolt has matured, devices such as docking stations have come into play allowing you to take a single Thunderbolt connection and translate it into everything from USB 3.0 to eSATA and even gigabit Ethernet.

Today, we have in the house one of these docking stations from CalDigit in the form of the Thunderbolt Station. This solution interfaces with Thunderbolt to give you three USB 3.0 ports, HDMI, gigabit Ethernet, and audio.

Scope of delivery for the CalDigit Thunderbolt Station gave us the power adapter and device itself; you will need to purchase a Thunderbolt cable separately.

The front of the Thunderbolt Station houses the audio and single USB 3.0 port. To the left, we have a power LED that lights up blue.

On the backside, we have two more USB 3.0 ports along with dual Thunderbolt ports for daisy chaining more devices. Moving to the right, we also find a gigabit Ethernet port and HDMI out. 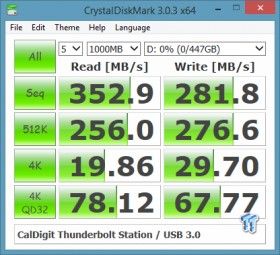 In our first test, we check out the speed of the USB 3.0 ports. For this, it is wise to install the driver from the CalDigit support page; otherwise, your speeds are drastically lower. Here, with our Seagate 600 Pro 200GB SSD, we were able to reach 352 MB/s read and 280 MB/s write. 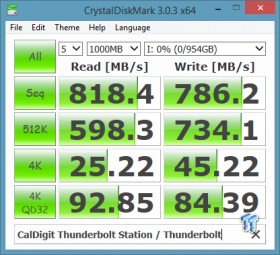 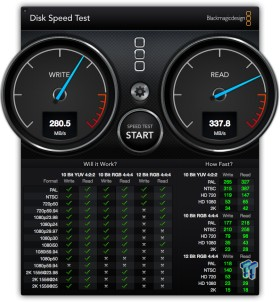 Here we have some OS X benchmarks for those of you using that platform. We are using our MBP Late 2013 for these tests. Above, we have our USB 3.0 testing with the same Seagate 600 Pro SSD, and as you can see, we reached 337 MB/s read and 280 MB/s write. 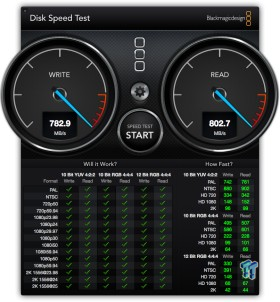 Next up, we have the LaCie LBD Thunderbolt 2 daisy chained giving us 802 MB/s read and 782 MB/s write. 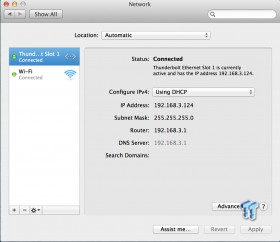 Above, you can see the gigabit Ethernet port in the network settings on the MacBook Pro.

The CalDigit Thunderbolt Station is a device that really works quite well, especially for users that have a MacBook Pro like myself. This allows you to add additional USB 3.0 ports along with a gigabit Ethernet port that you otherwise would not have.

Build quality of the unit is superb, as is expected from a brand like CalDigit, and performance is pretty good as well. In our USB 3.0 testing, we reached good throughput with our Seagate 600 Pro at 350 MB/s read and near 300 MB/s write. Thunderbolt was able to be maxed out with our LaCie LBD at 820 MB/s read and 790 MB/s write.

As for the gigabit Ethernet and audio, I found the gigabit speed on the MBP to be quite capable and near 112 MB/s at its peak, while the audio was good but not quite as good as the built-in audio of the MBP.

MSRP of the CalDigit Thunderbolt Station is set at $199.99 with a one-year warranty. Current market pricing can be found below.

PRICING: You can find the CalDigit Thunderbolt Station for sale below. The prices listed are valid at the time of writing but can change at any time. Click the link to see the very latest pricing for the best deal.

United States: The CalDigit Thunderbolt Station retails for $199.00 at Amazon.