Introduction, Specifications, Box Contents & A Look Around the MB168B+

USB-powered monitors, good ones, are hard - well, next to impossible - to come by. I had only been to one other Computex before I stepped foot into Taiwan again this year for my second. I get excited to see things that I don't usually see commonly, with my meeting with DisplayLink leaving me very, very impressed. 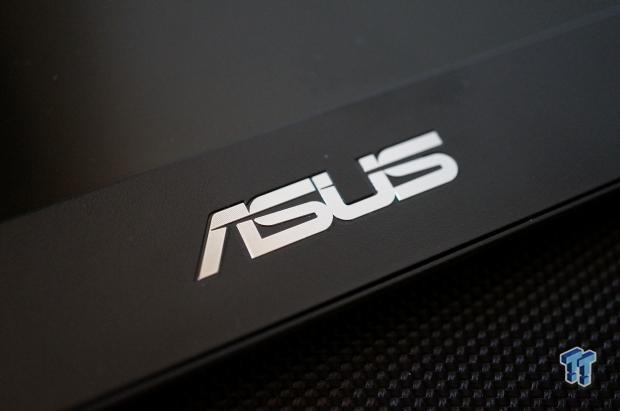 I saw a USB-powered monitor, an ASUS-built one, and wrote a news article about it, stating how I was impressed and that it was "one of the best technologies shown at Computex hands down".

Well, now I have that ASUS monitor in my lab, and I've taken it for a ride. Let's talk specs, since this is going to be one of the more important parts of the review. 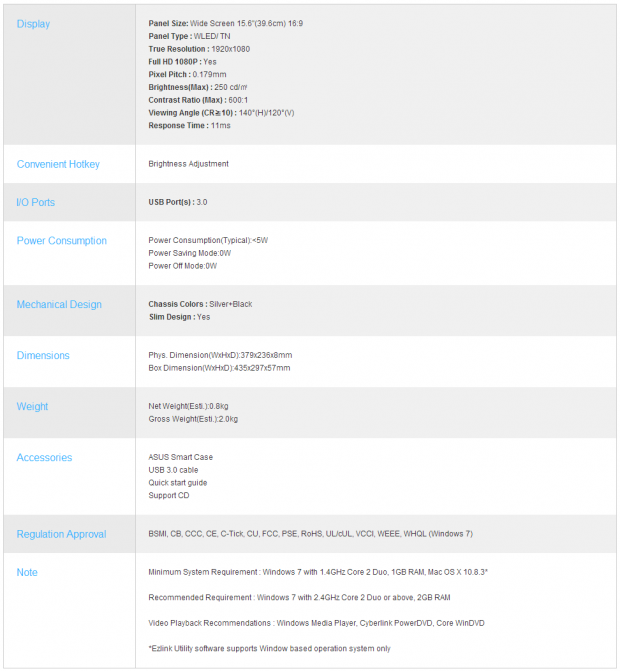 All of this comes in with at just 800g... yes, under 1kg! I thought the monitor felt super light to hold, lighter than my expectations, actually. Filling these specs out, we have the single USB 3.0 port, which handles both the power, and data stream to get a picture from your PC, to the display.

All of this comes in a package that is mighty thin, with the same thought process applied to its price. ASUS has a price of just $219 on this monitor, which is quite amazing considering its weight, thinness and quality. 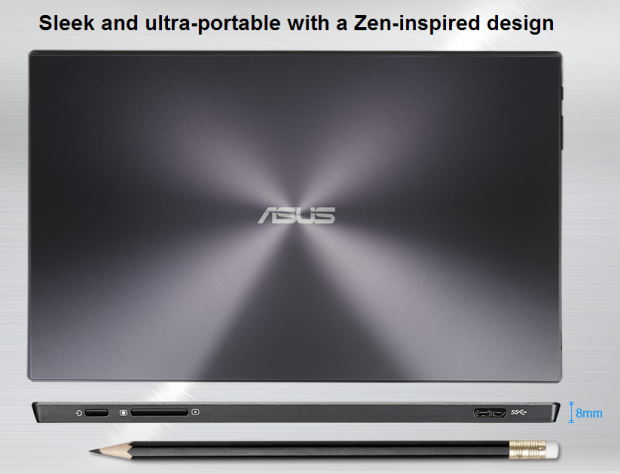 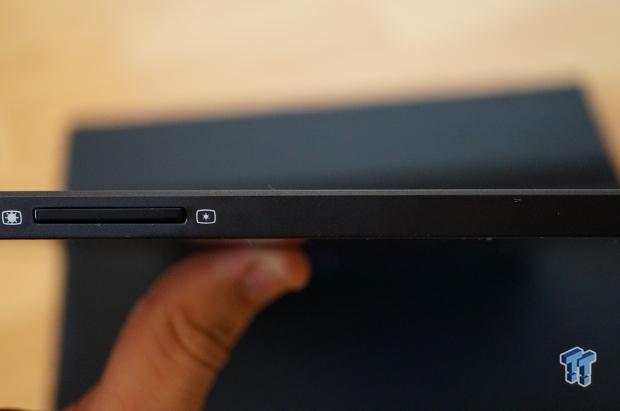 There's also an included ASUS Smart Case, which is a two-way adjustable stand, and protective sleeve for your MB168B+. You can just slot your MB168B+ on top, and it'll sit there nice and safe.

The ASUS MB168B+ also auto adjusts to whichever rotation you have it, be it portrait or landscape, which is a nice touch indeed. Some people love having their monitors in portrait, so there's no need to worry about getting elbow-deep in display configurations finding it, just flip your MB168B+ and bam, it auto rotates for you. 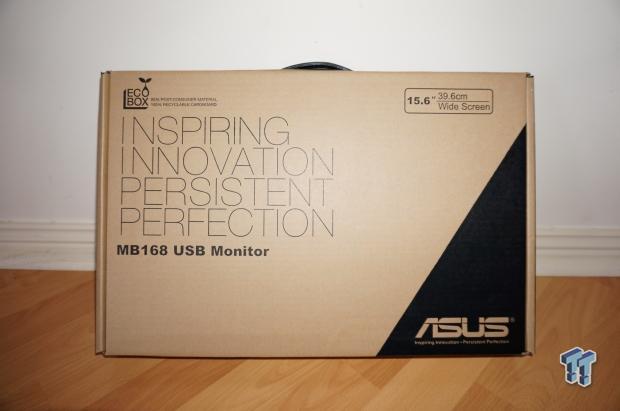 ASUS is light on the in-box contents, which is good: you don't need much to get the MB168B+ working. As you can see in the shot above, the box is a simple brown and black box. 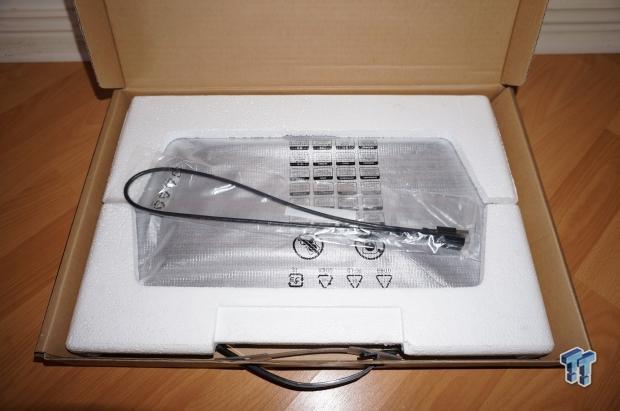 Opening the box, we have the MB168B+ in some styrofoam packaging to keep it safe, and the required USB 3.0 cable. 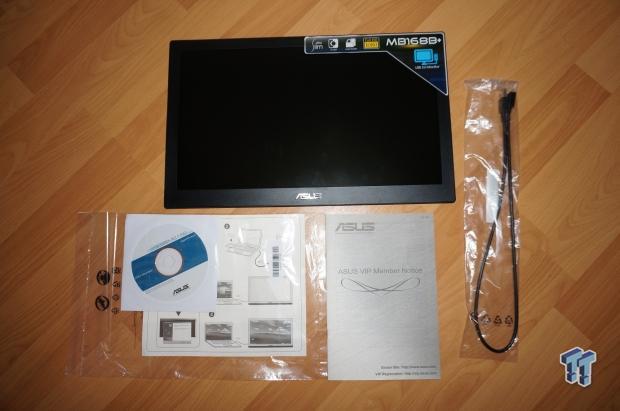 Taking the monitor out of the box, we have the full contents: the ASUS MB168B+ itself, the USB 3.0 cable, a quick start guide, starter CD and VIP Member Notice booklet. 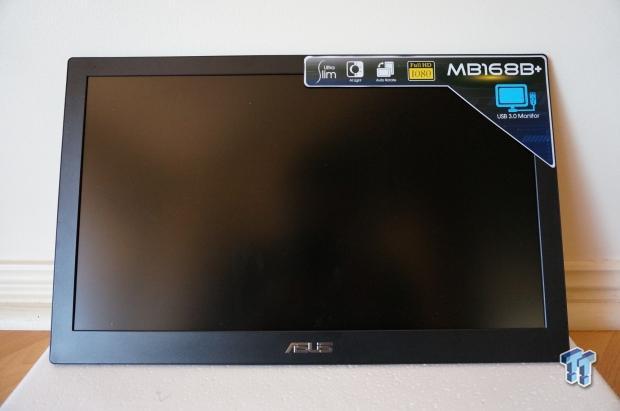 Moving on, we have the screen itself, which looks quite nice. You don't want something on your desk, or toting around with you, that looks anything but, right? 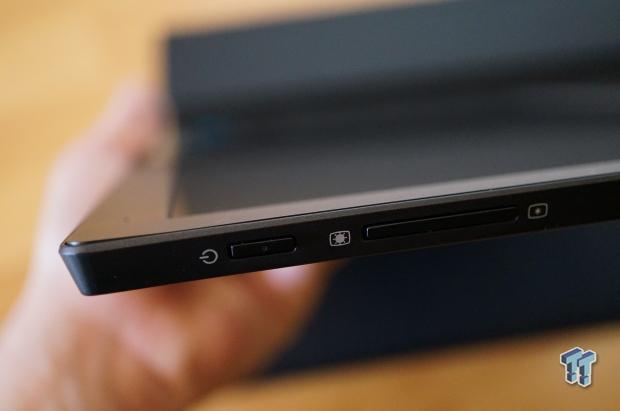 On the left side of the MB168B+, we have the power button, and brightness control. 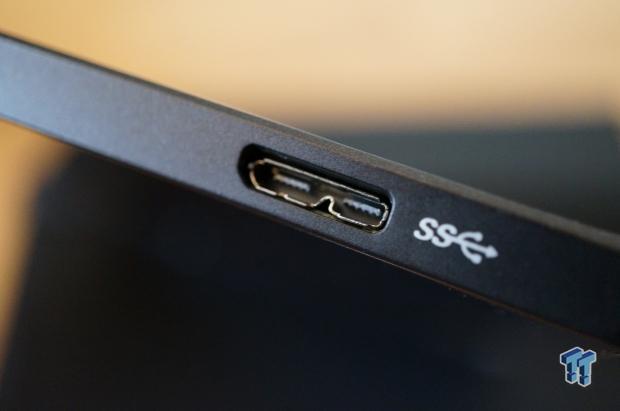 Below these controls, we have the USB 3.0 port that handles both data and power. 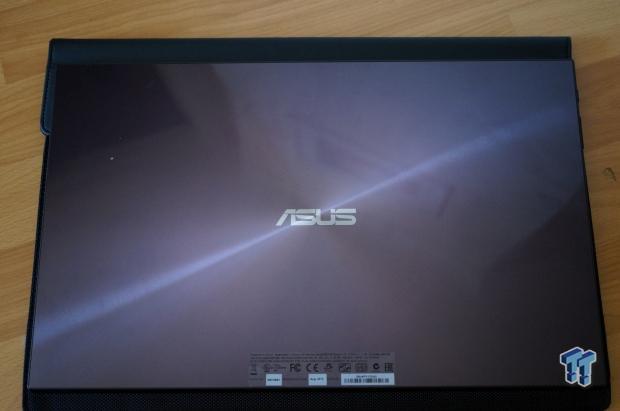 Flipping the ASUS MB168B+ onto its back, we have that same gorgeous metallic finish that its Transformer Pad range of tablets features. 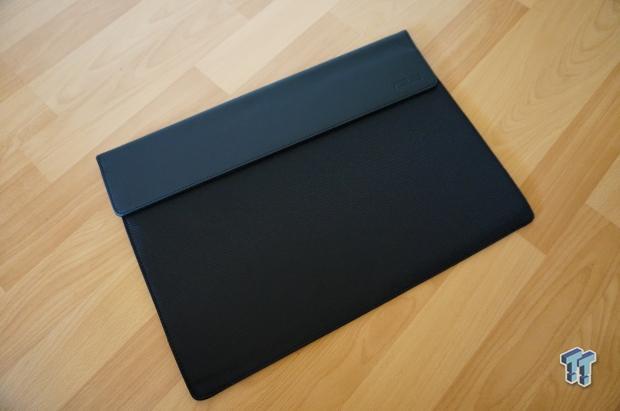 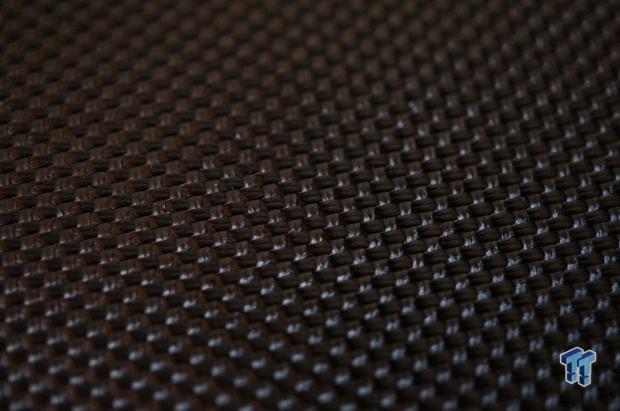 The pattern on the case is actually quite stylish, too.

General Use & Life with a Portable Monitor

When I saw the ASUS monitor at DisplayLink's suite when I was in Taiwan, I didn't expect it to be this thin when it arrived on the market. This is one of the best-selling points of the monitor, is that as a portable, USB-powered display, it truly is... portable.

Most people would think that a USB-powered display would include a resolution much lower than 1920x1080, something like 1680x1050 or even 1440x900, but ASUS and DisplayLink have worked wonders here.

I used the ASUS MB168B+ in a few different ways, to give it the usual (to my reviews anyway) "real-world" testing. Instead of just throwing it on a desk and telling you about how much its color is close to perfection (when we know it won't be) or to open it up and show you pictures of the insides (which we haven't), I used it in real-world applications. 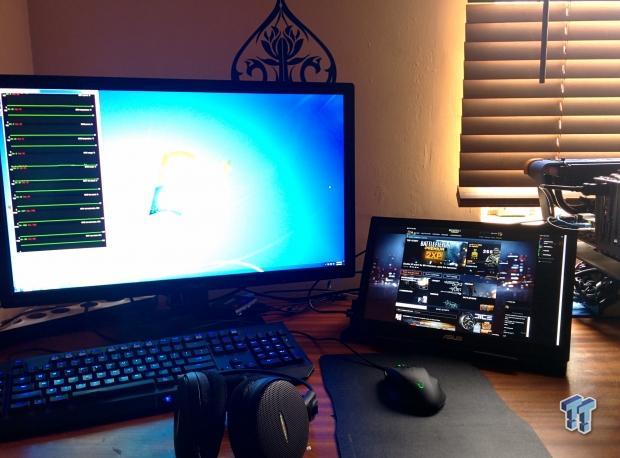 This came in very handy, as I took my PC (and the MB168B+) to my brother's house for a LAN, where I set my PC up (how any other person would), plugged in the ASUS MB168B+, and within seconds I was up and running with a second display.

This is where I felt the ASUS MB168B+ would find one of its niche markets: lanners. LAN gamers love having multiple screens, so they can be gaming on one screen, but have another screen up for various file sharing apps, music, videos, or in this case: Battlefield 4.

After plugging it in for my BF4 gaming, and disconnecting it to move it - I found the cable that plugs into the MB168B+ comes lose, very easily. ASUS needs to work on this, as it's a real downer on the display - any nudge on it, and the display loses connectivity.

It's portable enough, thin enough, light enough and being powered off USB - is the final nail in mains-powered monitors as a second screen for gamers. Another great use is for business users, like myself, who run a small PC like the MacBook Air, but need a second screen for productivity.

The ASUS MB168B+ is light enough that I would take it to events with me in my bag, and leave it in my hotel room. When I get back, I have to dump a bunch of photos and edit them - which is much easier to do with a second screen. But, who takes a mains-powered display as a secondary monitor around with them? No one.

ASUS have a market here with DisplayLink's incredible technology, to push secondary monitors to a specific market.

USB-powered goodness - Having a 1920x1080-pixel, 15.6-inch monitor that is powered purely through a single, small USB cable is just amazing. Even the most addicted tech junkie, like myself, has to be impressed with that.

Portability - It's thin! So thin! It's also really light, too. This makes it perfect for toting it around in your bag with your notebook/Ultrabook/MBA without an issue. The ASUS MB168B+ has become my new best travel buddy.

Did I mention portability? - Yeah, it's light, and thin.

Ease of use - All you have to do is plug it in, and let it do its thing. The monitor will auto detect, and download the required DisplayLink driver from the Internet, install it, and voila - you have a USB-powered monitor on your desk.

Response Time - The ASUS MB168B+ isn't going to replace your gaming monitor, as it does have its fair share of input lag. This is expected, but as a desktop monitor - it's absolutely perfect.

USB connector - ASUS needs to fix up the connection on the side of the MB168B+, I found it too loose, with a gentle brush against it, disconnecting the cable and losing signal to the screen.

Having a 1920x1080 portable USB-powered display is something I didn't think I would be using, but I am. It is incredibly freeing to have that much more desktop real estate, especially when travelling. Who wants to have the trouble of hooking up a hotel TV through HDMI (if they even have HDMI) to their PC?

Why would you do this, when every notebook or portable PC on the market has USB ports? And many of them at that.

It's incredibly thin, so it's really portable, which is great. The finish that ASUS has put to the MB168B+ is nothing short of beautiful. ASUS definitely earns its "Inspiring Innovation. Persistent Perfection" that it has on the front of the box, and most of its products now.

If you're after a portable USB-powered monitor, the ASUS should be the only one on your list right now, especially at its great $219 price. 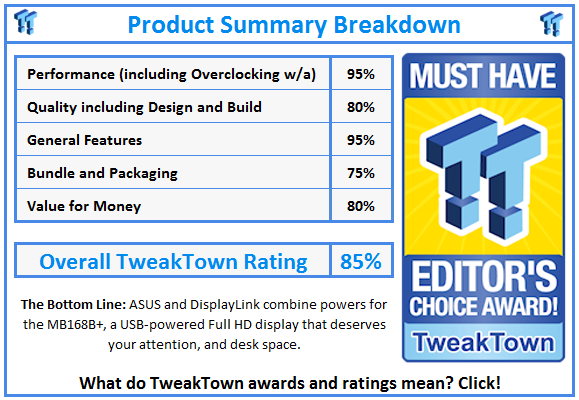