I remember meeting my contact at Genius at a party during Computex earlier in the year, when an earthquake struck (a mild one) and we were a few stories up in a building somewhere in Taipei. After that, we struck up a conversation and started talking about technology, and Man of Steel - as we were both fans of Superman.

Anyway, fast forward a few months and I now have one of Genius' mobile chargers in my labs, and boy what a charger it is! We have the ECO-u1000 charger, which is a 10,400mAh unit, and it charges our devices incredibly fast. 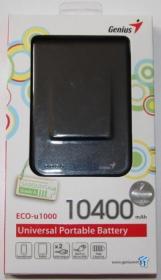 We'll take a poke around the packaging before we get into the review, so without further delay, we have the packaging in some pictures above. It's packaged quite well, nothing overly fancy, but it does attract the eye well enough. 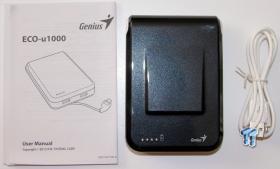 Once it's out of the packaging, we have the contents. It's quite a low-key package, with the ECO-u1000 itself, a user's manual (because it's so hard to operate it) and a microUSB to USB cable. 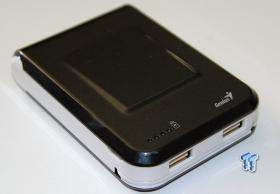 Once it's out of the packaging, we have the charger itself. It's not the best-looking portable charger on the market, but it more than makes up for it with its uber-fast charging speeds. More on that in a minute. Now for a quick walk around Genius' ECO-u1000 charger.

First up, we have the two main USB ports, which are both 5V/2.1A a piece. The microUSB port is 5V/1A. This provides some quick charging to your devices.

On the side of the device, we have the tucked-away microUSB cable. This is handy, because nearly all Android-powered devices are powered from a microUSB cable. It means you don't have to take another cable around with you if you don't want to. Next to the microUSB cable is the power button to the ECO-u1000 charger. 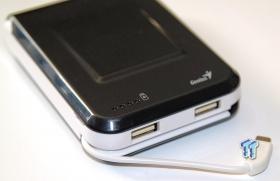 The included microUSB cable comes out a fair way, and it can be bent all the way backwards if that's what you need. I tested the Genius ECO-u1000 charger on a bunch of devices, but it does look pretty next to my new Nexus 5 smartphone, thanks to the matched white/black color combination.

Now, let's talk performance. On the Nexus 5's 2,300mAh battery, I was getting a charge of close to 1% per minute. This means I had a fully charged smartphone in around an hour - which is just impressive. It's up there with the best chargers I've used from Patriot Memory, and its FUEL+ line of mobile batteries.

The Genius' built-in microUSB cable is handier, in my opinion, as I could go out for the night and throw it into my bag and not worry about bringing a cable. The included cable is a huge weight off your shoulders for last minute planning.

It's not something I think is required for all chargers, but it really is a great inclusion. The included USB ports are great, because there are times when I want to charge up my smartphone, but my tablet is running low. When I did my week of testing with the ECO-u1000, I did have a case like that.

I was able to fully charge up my 2013 Nexus 7 tablet, while my Nexus 4 (at the time) was charging, and they both went up to full charge from around ~15% each. After that, I still had enough charge to top up my Nexus 4 smartphone twice more, before the ECO-u1000 started running out of juice. Four full charges to my devices is something I can't complain about, that's for sure.

It looks great, it performs super well, and it's priced at just $47... which is just a steal! At this price, I highly recommend the Genius ECO-u1000.