Emboldened by the success with transporting the series of Transformers toys and cartoons into a fully-fledged movie franchise, Hasbro extended its reach with G.I. Joe and Battleship flicks, the former of which was trashed by critics, but modestly financially successful. Still, Paramount must have thought there was enough of a heartbeat in G.I. Joe to continue with a second outing. Sadly, if it were a dog, it would have been put down long ago. 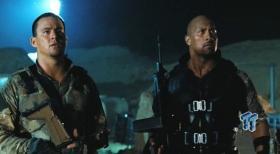 Following on from the events of its predecessor, Cobra Commander (Luke Bracey) has been captured by the Joes and encased in a watery solitary confinement tube, however Zartan (Arnold Vosloo) has successfully infiltrated the White House, posing as a double of the United States of America's president, whilst the real president (Jonathan Pryce) is kept hostage. When the Joes are framed for the theft of nuclear weapons and subsequently wiped out by order of Zartan, the survivors, including Roadblock (Dwayne Johnson) must band together with former foes in order to foil plans for worldwide destruction.

Originally planned for a U.S. Summer 2012 release, Paramount pulled the pin just weeks before release and delayed it for nine months, in a move that pundits proclaimed was due to terrible audience response cards. However, the real reason was to post-convert the film to 3D and give the film a little more breathing room in a crowded marketplace. The move seems to have paid off for the studio (they've already green lit another sequel), but the film whether in 2D or 3D is still a mess, albeit an entertaining mess.

Recasting some roles and writing out others, with new writers and a new director, G.I. Joe Retaliation is as much of a reboot as it is a sequel, representing a change of tone from its predecessor, eschewing some of the forced humor of its predecessor in favor of a straight up action adventure.

Stars Channing Tatum and Dwayne Johnson are reliable leads and lend the film some much needed gravitas (if I can use the word ever so lightly), whilst Adrianne Palicki provides the eye candy, however it's just not enough to overcome a plot that didn't need to be so 'clever', leaving a confusing mess of a film that's despite seemingly consisting of all the right elements, ultimately fails to gel together in anything resembling a cohesive whole.

Filmed with the digital Arri Alexa camera system and finished in a 2K digital intermediate, the Blu-ray encode is almost as good as it gets - and that's no bad thing at all. Retaliation proudly and unapologetically employs almost every modern treatment effect imaginable, including color timed within an inch of its life, which bringing out all the perfectly contrasted colors that have been manipulated into prettiness, whilst other scenes have been sponged with gritty and deliberate faux film grain. The image is sharp and heavily detailed at all times, showing off fine textures and all the intricacies of Industrial Light and Magic's visual effects sequences.

The image is, at least to my eyes, free of all video encoding issues, and certainly absent of film artifacts (having never touch celluloid throughout the process). 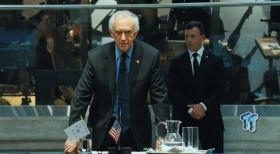 G.I. Joe Retaliation is presented in Dolby TrueHD 7.1 at 24 bits.

The sound design for G.I. Joe: Retaliation is certainly not the epitome of subtlety or quite dignity - it's a balls to the wall, over the top mix, which appropriately reflects the film itself. The encode as prepared for home video is just as aggressive as it was in the cinema, and every speaker is utilized to the full. Owners of 7.1 systems will certainly be grateful for their investment after popping this disc in. Surround channels burst forth with every sound imaginable, whilst the low frequency channel pulses with activity.

I didn't pick up any audio sync issues or drop outs, or any other transfer induced errors. This is a fine mix indeed, and certainly represents a solid reason to own the film unto itself, despite its evident flaws. 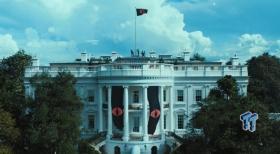 Interestingly, Paramount Pictures in Europe and Australia have taken the decision to release G.I. Joe: Retaliation in a 12 minute extended cut, with the theatrical cut absent, while in the United States market, the inverse is true. Sadly, this means that the Audio Commentary from the U.S. theatrical Blu-ray has been dropped - although it is included on the DVD copy inside the set. Let's take a look at the remainder of extra features.

Made up of eight parts and spanning 71 minutes is the G.I. Joe: Declassified Documentary, which goes into pleasing depth of the punishing shoot over multiple countries and locations, the visual effects and cast and crew. Not surprisingly, the documentary fails to shed light on the film's long delay, nor does it look at the cultural aspects of the long lived franchise. Still, this is more than what we get for most new films these days, so fans will be most pleased.

Lastly, we have three Deleted Scenes which run a scant four minutes long. I guess they used the remainder for the extended cut. 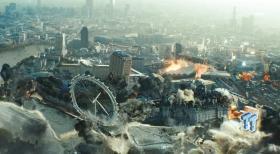