It would be easy to dismiss After Earth as a nepotistic star vehicle for Will Smith's spawn, directed by the once powerful M. Night Shyamalan, whose career has nosedived into self-parody, his star making project The Sixth Sense an anomaly in an otherwise meritless career. But After Earth has some solid entertainment value and although it's not always reinforced, it well and overcomes the baked-in cynicism and has won over at least one reviewer. 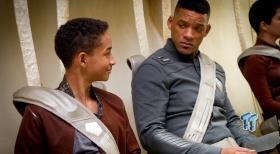 In an undefined 'near future', a cataclysm befalls Earth and the inhabitants flee to the distant planet Nova Prime. The Ranger Corps, an elite squad of Prime's protectors are dispatched on a mission to a nearby system, joined by General Cypher Raige (Will Smith) on his final mission along with his son, Kitai (Jaden Smith), who has been freshly denied entry to the corps. En route, the ship is damaged by a volley of asteroids, crash landing on the closest planet - an abandoned Earth, killing all with the exception of Cypher, Kitai, and an enemy combatant; a large and highly dangerous alien life form named Ursa.

Unfortunately, the ships distress beacon is inoperable, Cypher's legs are broken and is fast losing blood and the only hope for their survival; obtaining the distress beacon from the tail end of the ship some hundred kilometers away is a mission that is against the odds. With depleting oxygen supplies, Kita must battle the environmental threats that have evolved in man's absence, all the while evading the alien creature Ursa in order to save his own life, along with that of his father. 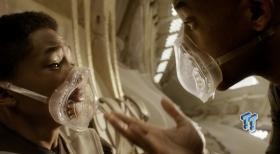 I'll let you in on a dirty little secret. Many reviewers, myself included, are less than holier than thou. I know - you're shocked! As we become more jaded and cynical, we can become guilty of entering the cinema with pre-conceived notions that require winning over. Admittedly, it's hard not to - we follow movies from conception to delivery and are privy to behind the scenes battles and word from industry spies and early looks through promotional materials. Some production noises are so strong it can lead to the still birth of the product. With this in mind, many reviewers pre-judged After Earth too harshly. After one too many disasters, director M. Night Shyamalan is a liability, rather than an asset to the movie poster and there's always been suspicion of Will Smith's progeny. 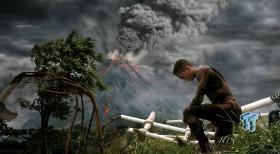 The genuine surprise is that both Shyamalan and Smith bring their 'A' game. Smith certainly isn't a new star; he's cut his teeth with leading roles in remakes of The Karate Kid and The Day The Earth Stood Still, but with such a huge role in terms of screen time, the film would clearly live or die by the strength of his performance. And here he's rather good indeed. Whilst he hasn't yet developed the charisma which has been crucial to his father's success, he more than makes up for it in raw energy and believability. 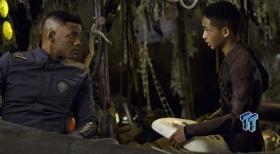 After Earth is certainly not an instant contemporary sci-fi classic by any stretch, but it is a competent and sometimes exciting feature which displays ample visual flair which aids in papering over some bumps in the script department and helps to solidify the dominance of the Smith family for some time to come. Whether it can rehabilitate Shyamalan's career however remains to be seen. 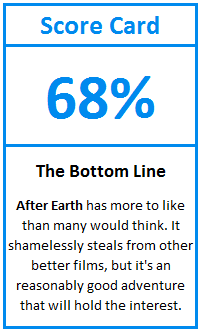