In 2009, a sleeper hit called The Hangover took Hollywood by storm, taking nearly half a billion worldwide on a mere $35m budget and solidifying star Bradley Cooper as a bankable leading man. Two years later and the inevitable sequel was released, memorable only because of how spectacularly unfunny it was, it's few laughs regurgitated from its predecessor. A further two years later and we now have the third (and so we're told final) entry into what's now known at The Hangover Trilogy. It will be memorable for... well, having the last laugh by pretending to be a comedy when it was anything but. 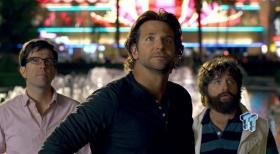 Hangover III opens with a pre-credit Bangkok prison escape scene featuring Mr. Chow (Ken Jeong) and the establishment that Alan (Zach Gafilinakis) is refusing to take his prescribed medication, leading to even more outlandish behavior such as the direct death of a giraffe and the indirect death of his father Sid (Jeffrey Tambor). An intervention is staged by Alan's mother, Stu (Ed Helms), Phil (Bradley Cooper) and his brother in law, Doug (Justin Bartha) to force Alan to attend a rehab clinic in Arizona, which is accepted once it results in the reformation of the Wolfpack, but en route through the Arizona desert, their car is run off the road by drug baron Marshall (John Goodman) and Doug is kidnapped at gunpoint until they can track down and deliver Chow before their time is up. 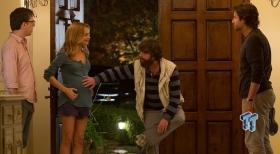 After it's all said and done, neither of the sequels to The Hangover really did much to justify their existence. The first film worked fine as it was; a solid and memorable comedy in its own right, the second merely rehashed the best of its predecessor's jokes and when the third tries to inject a little substance to proceedings, it comes as an unnecessary and ill-advised turn.

It feels rather strange, like someone kidnapped the characters from the first film, cloned and put them in a familiar landscape. They look the same and talk the same, but they don't act the same. This is how the Hangover III felt for me. 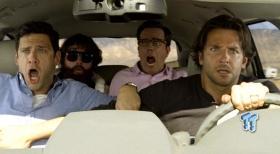 Ultimately there are a few decent laughs sprinkled throughout, but I really stress 'few' - they can be counted on one hand. This is no laugh fest, to be sure. I can understand that the filmmakers wanted to take the franchise in a fresh new direction for the latest (and apparently last) entry in the franchise, and on a certain level I even applaud the risky maneuver. But sometimes it's an ill-advised gesture for a studio to promise one thing and then deliver another. 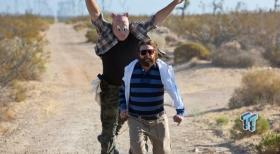 In short, if you really want to spend more time with the Wolfpack, I'd advise you to lower your expectations. Ideally though, rent or buy the first film on Blu-ray. You'll thank me later. 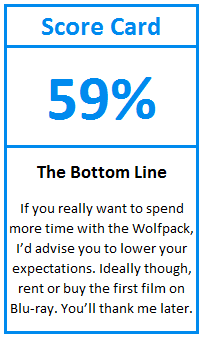