PQI has recently released their Air Series, and we here at TweakTown have had the distinct pleasure of reviewing each of these products in various configurations. Today though we are finishing up the series with the PQI Air Card in its 4GB configuration.

On the surface the Air Card looks like a great product. It offers another option to consumers that like the thought of Wi-Fi and Secure Digital together in one device. However, the Air Card changes things up a bit, allowing you to choose and upgrade the amount and speed of storage you want. If we got down to the fine details, this would classify the Air Card as more of an SD to micro SD adapter, more than it is an actual memory card.

As I stated previously, we received the Air Card in its 4GB configuration which comes with a 4GB Class 4 microSD card. Specifications of the actual adapter allow for 4GB to 32GB cards to be installed, and being aimed at mobile users, the Air Card has downloadable apps on both the Google Play Store and Apple App Store. Warranty is listed at one year. 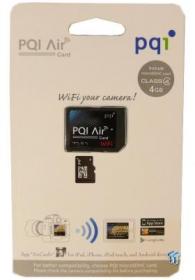 The packaging for the PQI Air Card details its capabilities to transform your camera into a Wi-Fi capable device. However, with these types of cards, they follow a very strict camera compatibility list, which includes only modern DSLR cameras. 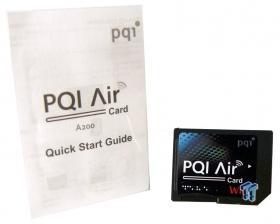 Removing the packaging contents we found ourselves with the adapter with 4GB card installed, along with the user manual. 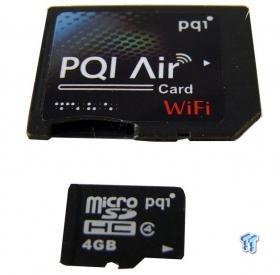 Above we see the adapter and included 4GB microSD memory card. 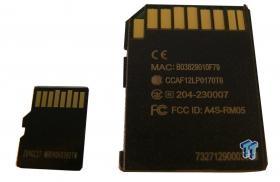 The back of each card has the standard SD connections. 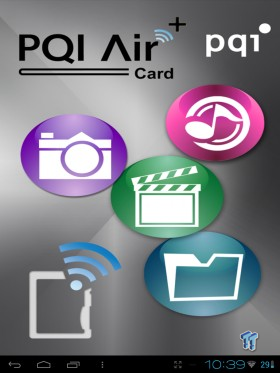 Moving on we installed the Air Card mobile app onto our HP Touchpad, with the splash screen being rather attractive. 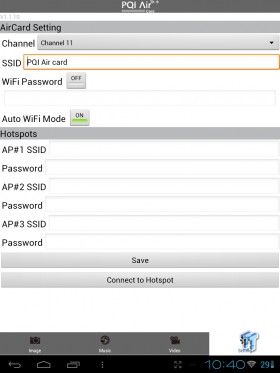 Diving into the settings we find there is the ability to add security to the card, along with adding up to three hotspots for the card to connect to, each with their own password. 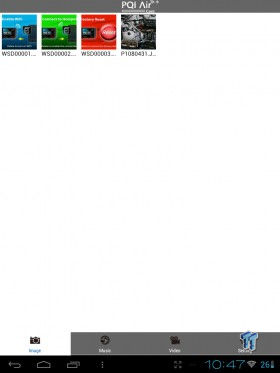 Along the bottom of the app you will find different tabs that correspond to the type of media you want to view. Here we have landed on the image tab showing some of the preinstalled images on the card. 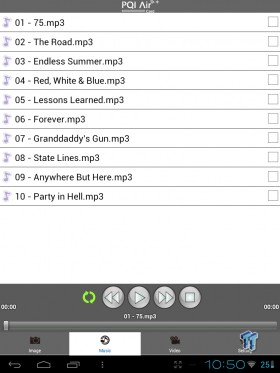 The music tab allows for playback of any MP3 files you may have on the Air Card. We loaded a number of albums onto the card, but it would only load a single folder. 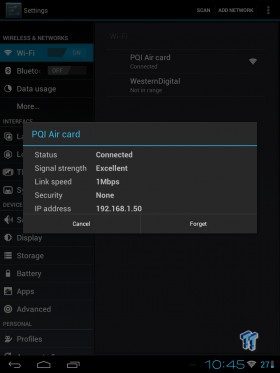 In trying to figure out what was causing the Air Card to run so sluggish, I started poking around in the settings an found that it would only connect at 1Mbps, even after upgrading the firmware to 1.47. 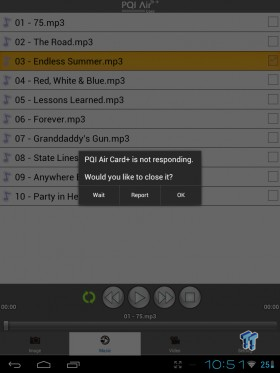 One thing that truly affects my position on cards such as these is the quality of the application, whether it be Android or iOS based. The Air Card app, as we see above, had many issues eventually force closing every time I would load it. 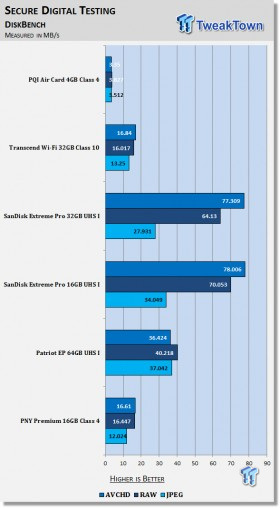 In our DiskBench testing we found the PQI Air Card struggling to meet Class 4 specifications. RAW image write ended up giving us 3.8MB/s, while JPEG and AVCHD peaked at 3.35MB/s and 3.51MB/s, respectively.

I personally like the concept of the PQI Air Card. The adapter functionality adds another dimension for the end-user supporting up to 32GB of capacity. However, there are a pile of issues with the application, which tends to be a proverbial turn off, when it comes to the full user experience.

Performance of the card in the configuration we received was subpar and left me wanting more, with the card reaching just shy of 4MB/s. Wireless performance was equally disappointing, and even sitting my Touchpad right next to the card offered no resolve.

Availability of the PQI Air Card is almost non-existent in the United States, as I was only able to find it on eBay. Pricing of the Air Card in the 4GB configuration we tested is set at $45.99. 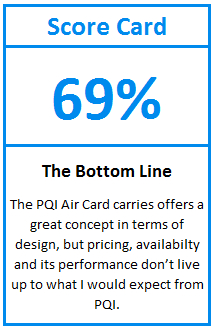 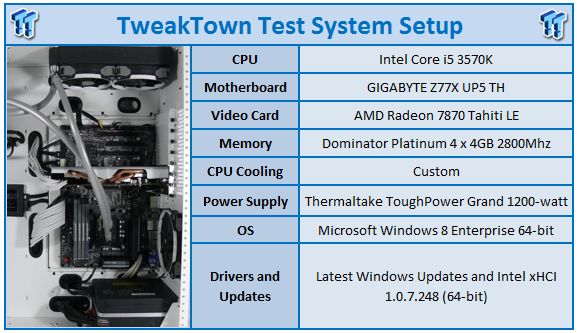