Over the years, at some point in time, most of you have likely thought of purchasing some sort of external storage. Either to back up important data or even to have your files with you on the go. Personally, I have all of my important data backed up in several places, online and offline. Some of you might choose to go with a NAS product from QNAP, Thecus or even the newly introduced units from Infortrend.

For those that have budgets you may want something with all the options of a NAS such as RAID 1, 5 or even 10. While the market has no shortage of devices to fit your needs, choosing one can be quite difficult with every manufacturer having something readily available.

Today I will be introducing you to the latest solution from ICY DOCK, a well-known company in the external storage market. The ICYRAID MB662U3-2S is the latest dual bay USB 3.0 enclosure from the California based company with options such as RAID 0, 1, JBOD and BIG next to its tool-less design and active cooling policy. On the compatibility side of things we find that the ICYRAID MB662U3-2S is fully functional out of the box with Windows XP/Vista/7 and 8 and even Mac OS 10.2.8+. 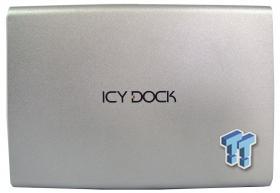 Looking over the enclosure perhaps the first thing you will notice is its single sheet aluminium construction, giving the ICYRAID an elegant appearance. 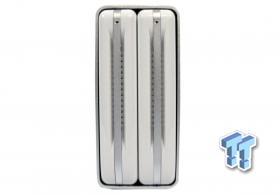 Moving over to the front of the unit you will see the only bits of plastic on the entire enclosure, just two slivers on each bay. At the top of each bay is a white LED for indicating drive activity. 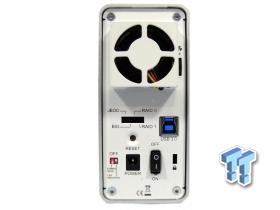 On the back of the enclosure the ICYRAID is all business. At the very top they have chosen a 40mm fan to take care of the thermals inside the enclosure with its very own fan controller to the right. Further down we find the RAID mode switch that offers RAID 0, 1, BIG and JBOD. Moving along we see the USB 3.0 port to the right followed closely by the reset and power save/ LED indicator switches. 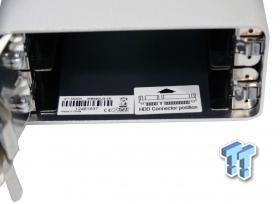 Opening up the bays you will find ICYDOCK has laid out a diagram for you to align your drives for installation. 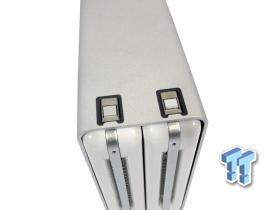 Included with the ICYRAID enclosure you will find a three foot USB 3.0 cable along with the 12V power adapter made by Coming Data. 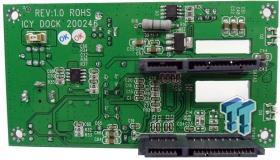 Removing the PCB from the enclosure we see the SATA ports directly soldered. 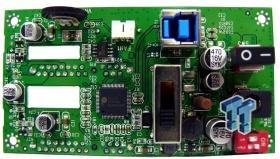 Flipping the PCB over we finally get a glimpse at the controlling IC. Another thing of note here is the use of solid state caps. 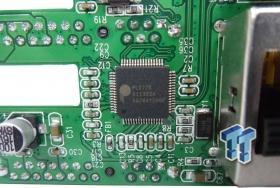 Upon closer inspection we find the Prolific PL2775, a USB 3.0 to dual SATA II bridge and RAID controller.

Choosing the proper benchmarks to be used in a review can be, at times, a hassle. While I would love to please all of you and run every possible benchmark on these enclosures, it would be at the very least time consuming. With that said I have chosen some of the more popular, and widely available benchmarks. All testing is run in the same order on every enclosure and that is the order you see it here in this review. 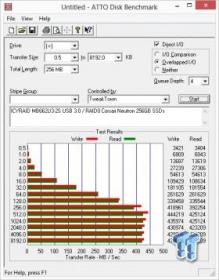 Looking over our first set of ATTO results with the ICYDOCK in RAID 0 I was rather impressed with the performance. As you can see the enclosure was capable of 435MB/s write and 425MB/s read at its peak. Of course this is with our very capable set of Neutron 256GB SSDs from Corsair. 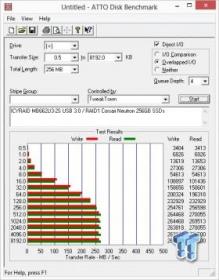 Moving over to RAID 1 we saw the ICYDOCK manage 263MB/s write next to 270MB/s read, near 60% of the performance of RAID 0 with the benefit of data redundancy. 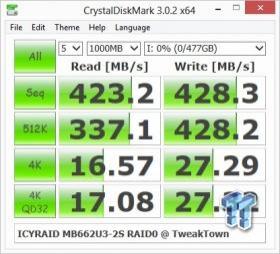 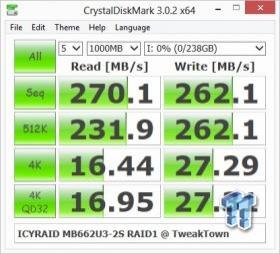 Moving over to our RAID 1 numbers with CDM we see the ICYDOCK produce great numbers in sequential and 512K random reads, at QD32 the results didn't move much from the aforementioned RAID 0 results at 16MB/s read and 27MB/s write. 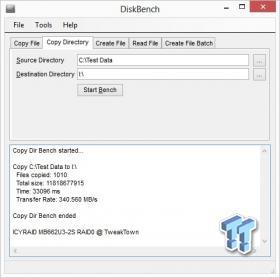 DiskBench, which we use for real-world testing was able to give us 340MB/s transferring our complete test data folder in 33 seconds while in RAID 0. 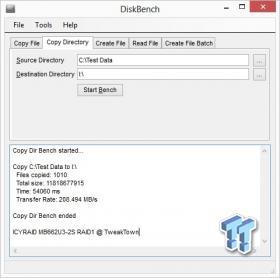 RAID 1 was slightly slower, but was expected as performance is a side effect of data redundancy. That said, we still managed 208MB/s at 54 seconds only a slight increase from the 33 seconds of RAID 0.

If you happen to find yourself in the market for external storage and want something elegant without sacrificing performance, the ICYRAID MB662U3-2S may be just what you're looking for. The single sheet aluminium design gives the enclosure added durability and even structure for cooling your hard or solid state drives depending on what road you choose to take. If you took a glance at the image of the rear of the unit you will also notice ICYDOCK left you with options as far as the lighting goes, a simple flick of the switch and the activity light is shutdown.

Performance of the unit is pretty impressive, and cementing this further is the pricing which I will touch on shortly. As you just saw, the unit is capable of speeds upwards of 400MB/s when used with solid state drives. While we only tested the RAID 0 and 1 functionality in this review, the enclosure does support two additional modes those being JBOD and BIG. JBOD as most of you know configures the drives independently and each drive is accessed directly. BIG on the other hand combines or spans drives into one larger virtual drive, which is then accessed as one.

Pricing of the ICYDOCK MB662U3-2S at launch is expected to be around $149.99. Comparing this to our previously reviewed CalDigit AV Pro that was significantly higher in term of price gives the ICYDOCK a slight edge. Though you will have to purchase your own drives with this unit. 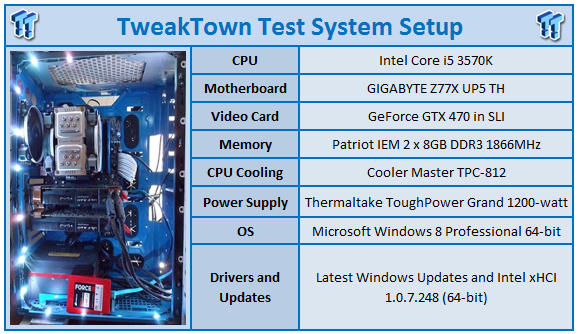