The Life of Pi is clearly a film that the studio, Twentieth Century Fox, wanted to market as some sort of transcendental experience, ala Avatar. Granted, there are a few moments of beautiful landscapes that do evoke some of the neon lit imagery of Cameron's universe, but that's where the similarities end. The Life of Pi is a completely different tale and one which is in some ways more subtle about its message. 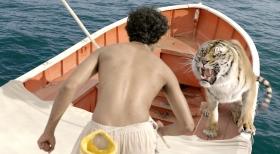 Pi Patel (Suraj Sharma) is a 16 year old, deeply religious boy whose family owns and operates a large zoo in India, which Pi tends to. The star attraction of the zoo; a Bengal tiger named Richard Parker due to an administration error is an animal or ferocious power, which Pi learns to fear at an early age. When the family decides to start a new life in Canada, the family, along with the residents of the zoo (en route for sale in the continental U.S.) board a Japanese freighter which will take them over the pacific ocean.

During the trip, the vessel encounters rough seas and huge waves. Pi wakes during the night to view the disturbance which quickly turns deadly as waves overcome the vessel, dragging the boat down. Whilst the crew assist him into a life boat, his entire family are lost at sea and Pi is soon alone with just a few of the animals for company which are soon dominated by the tiger, Richard Parker. 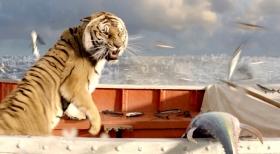 From the confines of the life boat, Pi must garner the respect of the tiger simply to not be killed by him, but quickly a symbiotic bond grows, which will be necessary if they are both to survive.

Based upon Yann Martel's best selling 2001 novel, (dubbed 'unfilmable' by critics), The Life of Pi is a rewarding and enjoyable experience, high on philosophy and subtle layers of pretext. Whilst some may be turned off by the overtly religious aspects of the narrative, a religious understanding should not serve as a barrier to enjoying the film.

As Pi, Suraj Sharma provides a stunning performance as the teen fighting for survival in the brutal Pacific Ocean, an emotionally complex role made ever more difficult by the significant use of digital effects. 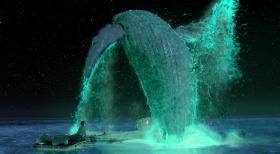 The Life of Pi provides some stunning imagery - with some beautiful dream-like sequences, which despite significant servings of computer generate imagery, are not lost under the weight of the code underneath. The Bengal tiger, Richard Parker, himself is not just a photo real CG effect, but a key cast member. That he is such a believable character, not least one in which much of the films emotional quotient emanates from, is testament to the extremely talented artists at Rhythm and Hues whom have long specialized in providing believable CG animals to Hollywood productions. 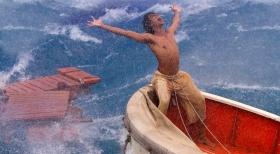 Adding to an already incredibly diverse filmography director Ang Lee has overcome many obstacles which I fully expect to be recognized by the Academy of Motion Picture Arts and Science as we approach Oscar season - and rightly so. 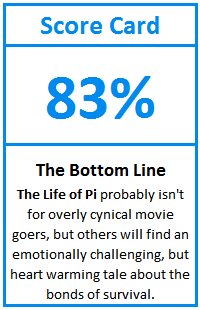