Hollywood remakes are nothing new. As visual effects technology take further leaps and bounds we will inevitably see more, but over the last few years things have changed. The time elapses between 'original' and 'remake' seem to be shortening. Scarily, films that I grew up with are now being remade. Just a few weeks ago I heard word that Sony Pictures are clamoring to begin work on a Jumanji remake.

Many readers will be familiar with the violent 1990 Paul Verhoeven original, starring Arnold Schwarzenegger. It's certainly aged, but I wouldn't go so far as to call it outdated. A recent viewing confirms that it's still a cool ride and still has the power to impress. Total Recall 2012...not so much.

Douglas Quaid (Colin Farrell) is having somewhat of a life crisis. He has a stable job, a beautiful wife (Kate Beckinsale) and solid friends...but something is not quite right. When Quaid visits Rekall, a memory implant facility with the desire to recall a life an adventure as a secret agent, the operation goes wrong and the facility is quickly stormed by SWAT agents attempting to subdue Quaid. Utilizing reflexes he wasn't previously aware of, it quickly dawns on Quaid that the life he thought he was living, might not be real at all.

Total Recall 2012 seems to be a remake of the original film, rather than the source material novel "We can remember it for you wholesale" by Phillip K. Dick. Three-breasted woman. Tick. Cameo by look-alike from original. Check. Characters not in the book, but in the original film. Bingo. The biggest change from the original is that the action is no longer set on Mars, but a dystopian vision of the future where the world has been obliterated and all that is left is the United Federation of Britain and the poorer Colony (Australia). It certainly takes its visual cues from the likes of Blade Runner, but with a sense of detachment that only computer graphics can provide.

My biggest issue with Total Recall is that compared to the original, it's a limp and lifeless affair, that looks nice, but has no beating heart under its slick exterior. To be fair the original was not a masterpiece, but it featured a sense of fun and adventure that's completely absent from this take. Colin Farrell does his best with the source material, but compared to the fun of Arnold Schwarzenegger's take on the character, it's a real joyless slog. For a film that's supposed to be about humanity's struggle, it's completely devoid of anything resembling emotion, especially humor which it certainly could have done with. As with The Phantom Menace, it's difficult to engage with something that feels so alien.

Despite some visually interesting sequences, including a Fifth Element style car chase and the eye candy of Kate Beckinsale and Jessica Biel, it just all feels very by-the-numbers. As a final insult, some great character actors such as Bryan Cranston and Bill Nighy are completely wasted, with the latter's character almost completely superfluous to the story, rather than a pivotal Deus Ex Machina as in the original.

Basically, I feel as if I watched a video game for two hours. It's mildly entertaining and I could certainly think of worse ways to spend a few hours, but that's faint praise indeed. My advice; give it a rent when it's out on Blu-ray, or better still, add the original to your collection. 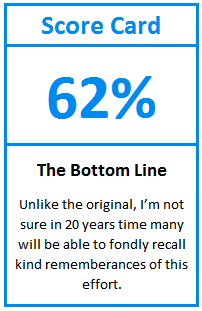