As time goes on and display devices become larger and larger, somewhat ironically, I value the experience of going to a cinema more and more. Yes, sometimes the kids talk, there's bubble gum on the seat and the candy bar is horrendously expensive, but the communal experience of seeing a movie in a darkened cinema, knowing at times that you are experiencing something special cannot be replaced or replicated.

For this reason, I love seeing my favourite movies on the big screen. If it takes a stereoscopic 3D retro-fit to get the film there, then so be it. For me, the 3D isn't the selling point, although it's a cool gimmick. No, it's the chance to relive a cherished experienced and share it with those I love.

I first saw Beauty and the Beast when I was five years old. I don't really remember it, but I have seen the movie a few times since then. Now, as a 26 year old adult (well, I'm definitely 26 years old) I'm a much different person, but in many ways still the same. Digital lounge regulars will no doubt be familiar with my Disney soft spot. Well it's true, but I'm not ashamed. The songs are brilliant, it's innocent fun and besides, Ariel is a hottie. Even if she isn't real.

When a young prince is cursed with the form of a beast for his selfishness and arrogance, he is banished to his castle with only his enchanted subjects as company. However, the beast has one chance at redemption. If he can open his heart to another, so she loves him in return, the curse will be broken. But who could ever learn to love a Beast?

The bookish Belle (voiced by Paige O'Hara) years for adventure and a life beyond the provincial Parissian village. Her inventor father Maurice is a social pariah, seen as crazy. When he is lost in the woods and seeks solace in the Beasts castle. When the Beast holds him captive, Belle traverses the country side to find him. When she does, she offers herself as the Beasts prisoner in his place. But as the two spend more time together, perhaps there is something there, that wasn't there before.

The golden age of the Walt Disney company, which began with 1989's The Little Mermaid, and continued with Aladdin and The Lion King have much to thank Beauty and the Beast for. Despite their popularity, more so than any of the others Beauty and the Beast is a mature, thoughtful and sumptuously animated classic, which has adults in mind, just as much as the children.

The soundtrack to Beauty and the Beast composed by Alan Menken and written by Howard Ashman is just as beautiful as it has ever been. Any Broadway musical would be lucky to have such moving songs as "Beauty and the Beast" and "Be Our Guest", but this film has six of them. Disney owes much of the films spark (along with Little Mermaid) to song writer Howard Ashman, who tragically succumbed to AIDS before the release of the film.

Disney has put significant effort into the 3D conversion of the title. From the opening scenes, it's clear that this is going to be a heavily involving 3D effect. Whilst the 3D rotoscoping is not quite as aggressive as performed on The Lion King, I would have liked to have seen less flatness to Gaston's face, for example, however overall it's a very pleasing effort. Beauty and the Beast was the first title to fully utilize the CAPS animation process, which digitally inks the image and is infinitely more conducive to the 3D rotoscoping process, the real test will come with next year's release of The Little Mermaid, the last production to use hand drawn production cels.

For now, fans of the film can pick up Beauty and the Beast on Blu-ray, and in a 3D Blu-ray pack, before the film enters the Disney vault for the next seven years. The film will have a short 3D theatrical re-release, with a two week engagement. 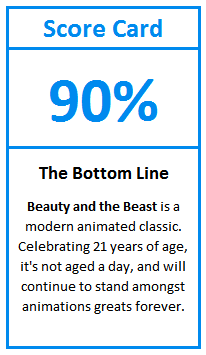