I can just imagine being a fly on the wall when the film was pitched:

Exec 1: "Transformers just made a billion dollars. We need a new franchise like Transformers."

Exec 2: "Hasbro is shopping some titles around. There was that game...Battleship?"

[Execs high five and do a line of Coke]

Battleship is of course loosely based on the classic board game manufactured by Hasbro. I say 'loosely' because short of a tip of the hat during the climactic battle, this is a film based almost entirely on the name alone. Why Universal thought this was a good title to exploit is a little beyond me - most demographic hitting Gen Y kids would probably struggle to even be peripherally aware of the board game.

Taylor Kitsch, fresh off the dubious success of John Carter plays Alex Hopper, a bedroom dwelling no-hoper, given a second chance by the U.S. Navy. Admiral Shane (Liam Neeson) isn't a fan, preparing to dump Hopper from the service, only complicated by the fact that Hopper is dating his daughter Sam (Brooklyn Decker).

Whilst the Western allies join forces for the bi-annual RIMPAC Naval Exercises off the coast of Hawaii, an attack by hostile alien forces begins. The three Navy warships contained within the attacker's force field begin a fight for survival against an enemy force significantly more advanced than our own.

There are formulaic films and then there is Battleship. The film literally steals from dozens of far superior films including Independence Day, Battle Los Angeles, War of the Worlds and the obvious one Transformers. Hell, Battleship even has the gall to re-use sound effects from the latter. However, unlike all of the above examples, this film just isn't the sum of its parts. The film barely works, but it's such a joylessly slog that many viewers simply won't care by the time the film becomes mildly entertaining during the last quarter of its runtime.

Cinema goers have been slowly de-sensitized by big dumb summer blockbusters, but they are almost always worth the popcorn dollars. I just can't say the same for Battleship. The first hour serves as a painful show of military might (the U.S. military no doubt hinged their support on promoting the forces to the young and impressionable), and a ham-fisted attempt to manipulate the audience into giving a damn about the characters. The amount of exposition for a film marketed as a non-stop action adventure kills any sense of forward momentum. Twenty minutes could have easily been cut from the film from the first half and it would have been stronger for it.

It would also be remiss of me to not mention the cinematic debut of pop star Rihanna as Petty Officer Raikes. The fact that I cringed in the mano a mano sequence, calling to mind the unfortunate incident with ex-boyfriend Chris Brown, means that I not only cannot take her overly seriously, but was horribly miscast ala fellow songstress Kylie Minogue in Street Fighter.

The nicest thing I can say is that Director Peter Berg seems to have tried to imbue the film with a bit of meat; it's just that he fell way short of the mark. The visual effects are unsurprisingly good, but again, no amount of technological prowess can make up for the lack of compelling narrative. 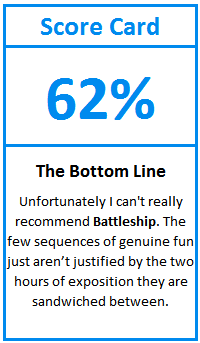