Since launch we've looked at the HD 7770 in a number of ways. We saw the pre-overclocked XFX offering, we also checked out the Sapphire offering in CrossFire, overclocked the MSI card and checked out the reference model from AMD.

Because we've looked at the HD 7770 in a number of ways before the HIS model we've got today arrived, we figured that we'd just take a quick look at what HIS was offering us. Run 3DMark 11, pull some heat and noise numbers and give you our thoughts because we already know how the HD 7770 runs in a number of scenarios. So, saying all that, let's take the time to quickly see what's going on with the bundle. 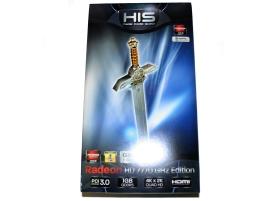 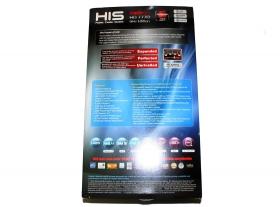 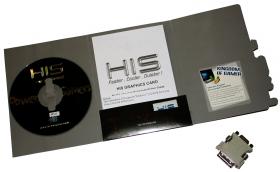 When it comes to the bundle of the HIS HD 7770 we're not shocked to see a pretty small offering with a driver CD, manual, HIS sticker and DVI to VGA connector. Considering the $149.99 price point of the model, this is exactly the kind of bundle we'd expect from the card. It's nothing too fancy, but at the same time should offer most people everything they need to get up and running.

Moving onto the card itself there's not heaps going on with the overall design. As you can see most of the card is covered up by a black shroud that covers almost the entire PCB. 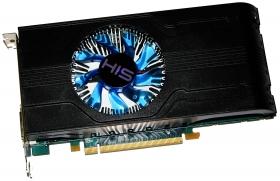 Just off to the left we can see the fan and behind that we've got an aluminium heatsink. There's nothing too fancy going on with the overall cooler, but considering the lower end nature of the model, it's not something that we're too worried about. We should still see the cooler perform well.

Taking a quick spin around the card you'll find the typical single 6-pin PCI Express connector at the back of the card while as we move across the top and closer to the front we can see a single CrossFire connector.

Finally we finish up with the I/O side of things and as you can see below we've got a single Dual-Link DVI connector on the far right with two HDMI ports and two MiniDP connectors to round out the connectivity side of things.

As we've mentioned already the HD 7770 iCooler GHz Edition from HIS here is just a reference clocked card and as you can see below that means our core comes in at a cool 1000MHz while the 1GB of GDDR5 carries a 4800MHz QDR memory clock. 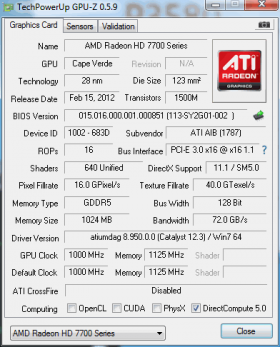 Because we've already tested the HD 7770 in so many ways as mentioned initially we didn't see a huge point to re-testing it again at the reference clocks. Instead we opted to just run 3DMark 11 to make sure performance lined up as we would expect while we also grabbed the temperature, noise and power numbers from the card.

Firing up 3DMark 11 we ended up with a score of P3580 which is exactly what we'd expect from the HD 7770. It's not a bad score, but our issue has always been compared to the HD 6870 which sits at a similar price point at the moment, the HD 7770 comes off looking quite overpriced.

What was really nice though was the cooler which let the GPU sit at 35c when idle and still quite a cool 51c at load. More surprising, though, was the cooler which came in at 54.4dB at idle and 55.1dB at load. These are good numbers which see this as the second coolest running card and quietest active cooled card we've tested recently.

The biggest issue continues to be the price of the card. While there's still a large amount of HD 6870 stock available at that current mid $100 mark after rebate, the shine is just taken off any HD 7770 model.

What makes the HIS HD 7770 offering more attractive, though, is the cooler which really is near silent. Against the HD 6800 series, the HIS iCooler version clearly wins out in that area. And if noise is really important for you, then this could be an attractive option.

The HD 7770 series isn't going to come down in price anytime soon as we will simply see the HD 6800 eventually be cleared out making the HD 7770 look more attractive. Until then, though, the model does look overpriced, and while the HD 6800 series card is a last generation model, the bottom line is performance talks, and the HD 6870 is a better buy.

Saying that we're starting to see some nice variants of the HD 7700 series come out, last week we saw an awesome passive cooled HD 7750 and today we've got a really cool running HD 7770 offering from HIS that is also extremely quiet.

If noise levels and temperature are extremely important to you, along with the fact that you want to jump on the latest 28nm GPUs from AMD, then I can see how you could be swayed towards buying the HD 7770. While the series is growing on us thanks to some nice variants, we're still not 100% sold on them just yet. 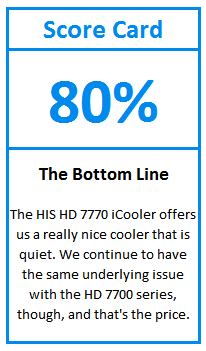 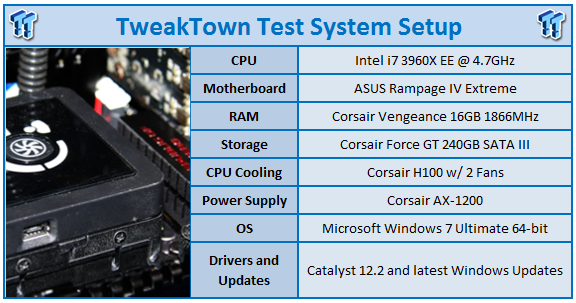