UPDATE: I made some errors in my haste to get this article online. When in "Gaming Mode", the Windows key is automatically disabled. The num pad is not a calculator, as I wrongly assumed when I looked at it quickly.

So, only a short time ago we posted our initial impressions article on the Razer Blade 17.3-inch gaming laptop. In short I came to the conclusion that it was worth the high asking price of $2,800 USD, but I felt it falls a little short of Razer's claims that it is the world's first true gaming laptop. Don't get me wrong, it's a really swish and impressive product.

What we want to do now is giving you a full hands-on look at the Switchblade User Interface panel that comes with the Blade. I guess in the design phase, the Razer folk thought in their efforts to create a highly focused gaming laptop that the regular touch pad in its centralized and boring location had to go and I applaud them for doing do. I personally cannot stand laptop touchpads and encourage other tech companies to get out of the square and experiment like Razer has done with the Switchblade UI.

If you are new to this whole talk about the Switchblade UI, let me sum it up right now. Gone is the run-of-the-mill regular touch pad and number pad area. The Switchblade UI is a combination of functions that is placed where the number pad is usually located on a keyboard. It is a combination of ten fully customizable buttons with graphical icons (Razer call them Dynamic Adaptive Tactile keys) as well as a four point multi-touch touch pad with gesture support and under the touch layer is a 4.05-inch LCD screen with an 800 x 480 resolution. There are also left and right click buttons as you'd see on a usual laptop touch pad. I doubt these buttons would get used much as any real gamer probably would have a gaming mouse hooked up to the Blade via USB.

Let's start off with those ten customizable buttons at the top area of the Switchblade UI panel. This is probably one of my favourite parts of the Blade and definitely what stood out to me the most on first inspection. By default, the icons in order are: touch pad mode, calculator, several gaming services, YouTube, Facebook, Twitter, GMail and the clock / date. If you don't have an external mouse hooked up to the Blade, you can use the built-in touch pad. As I mentioned it comes with gesture support and they include: move cursor, single left click, double left click, left click + drag, scroll down and up, scroll left and right, zoom in and out (much like Apple pinch-to-zoom), rotate left and rotate right and finally swap Dynamic Adaptive Tactile key mapping, if you have more keys mapped than the default ten icons. 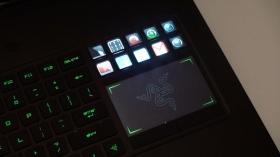 The calculator is self-explanatory, but pretty handy - it looks and functions just like the Windows calculator. As for Facebook, Twitter and Gmail, they use the mobile versions of those websites to give you access to those social sites and email whilst you are in the game or doing something else on the system. As I mentioned in the video above, it's great to have access to these sites. Your friend might ask you to jump on Facebook for example to look at something and if you were busy battling away in a game, you'd usually have to say no and check later. 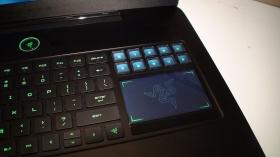 Now you can just find a nice safe camping area in the game and look down at the screen and jump onto Facebook and check it out. Or what about you just won a round of BF3 and want to brag to your friends on Twitter? Then you just push the Twitter icon button and up comes the mobile version of Twitter and you can post away without leaving your game. And that is really good as some games don't like dropping back to the desktop or may be really slow to do it and not recover properly.

Probably the most impressive default icon is the YouTube button. This also brings up a mobile version of YouTube and with it the usual buttons you'd expect from YouTube including most viewed, search and so on. Let's say you were stuck on a level in Skyrim that you couldn't pass. Instead of getting a headache about it or having to leave the game, just glance down at the secondary screen on the Switchblade UI panel and search YouTube for a video to help you pass to the next level. I think this feature alone is going to help sell many Blade laptops and I personally like it a lot. 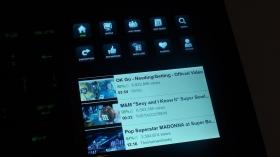 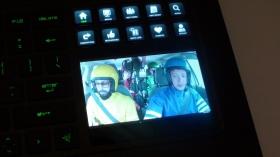 All of this customization is controlled by the included Razer Synapse 2.0 software. Besides just customizing the ten programmable keys on the panel, you can also adjust pretty much any key on the keyboard to do whatever you want. You can also make your very own buttons and have them displayed on the keys - very cool! You can assign a keyboard function (a letter), assign a mouse function, set a macro, switch profiles, launch a program or disable the key altogether. I did find it a little disappointing that the Windows start key could not be disabled as I know some gamers have an issue with that key interfering with their gameplay at times. 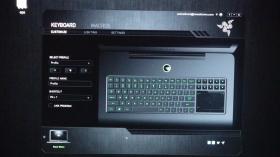 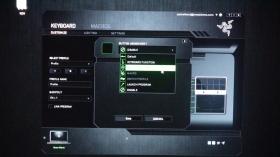 That about finishes us up here. The Switchblade UI is a very important part of the Blade and without it and instead just a regular old boring touch pad, the Blade laptop would just be another laptop with some fancy looks. While I cannot fully agree that the Blade is the "world's first true gaming laptop", I can say that the Switchblade UI does make it go close and I know a lot of gamers are going to love it to bits, just like I did.

Great innovation at the end of the day here Razer, keep it up and we look forward to seeing what you guys come up with next! Make sure you watch the video above as I could write for days and days and not provide the same accuracy of description as only the video can provide.