Even before the cameras started rolling, I had strong doubts regarding the film that would become Rise of the Planet of the Apes since the news that studio Twentieth Century Fox was shipping the film around to work for hire directors and being turned down because of the impossibly short time span afforded it. Fearing another X-Men 3 debacle and coupled with the disgraceful 2000 reboot by Tim Burton, I basically wrote the film off and even the trailers did little to pique my interest. Well, I'm happy to admit when I'm wrong. And in this case, I was very wrong. Rise of the Planet of the Apes is a slick, smart, character driven film that impresses on many levels.

Will Rodman (James Franco) is a genetic scientist working on a treatment for Alzheimer's Disease, whom his father Charles (John Lithgow) is suffering and quietly degenerating from. While the experimental drugs are showing pleasing progress in the test monkeys, the procedure starts to show unintended side effects - advanced ape intelligence. When an accident occurs during trials, the experiments are closed down and the simians are euthanised. But one of them has secretly given birth and the infant chimp is smuggled from the lab by Rodman, whom he raises in his home. As expected, the monkey, Caesar, grows exponentially intelligent, but when he is taken from Rodman's care and placed in an abusive monkey shelter, the seeds of revolution are sown.

Rise of the Planet of the Apes is a clever set up to the original 1968 film starring Charlton Heston, loosely based on the novella 'Monkey Planet' by Pierre Boulle. The surprise twist to that film is set up magnificently here and despite the common sense segue, one I didn't see telegraphed in advance, leaving the viewer to mentally connect the dots during the closing credits. I think this is the key to the film, unlike many of the summer blockbusters it doesn't treat the audience as dumb, or hit them over the head with key plot points.

James Franco who is best remembered for playing Harry Osborn in the Sam Raimi Spider-man films, generally plays charmless, unmemorable types, but I found him to be suitably fine in this role, even if I don't quite completely believe him in the role of genetic scientist.

More impressive is John Lithgow, whom is best remembered as the villain from Stallone's Cliffhanger and the father e alien family in TV's Third Rock from the Sun. He plays the role of a suffering Alzheimer's victim with complete emotional conviction and nails the sense of confusement and despair as the aggressive illness wreaks havoc on his mental faculties.

However, the star of the film is ironically the one who's face is not even seen on screen; Andy Serkis, who's name will be familiar to Lord of the Rings fans as the motion-capped actor who played the villainous Gollum. Serkis has become the go-to man and tireless advocate for motion capture technology and he plays the role of Caesar with subtle nuances and tics that even the best CG motion key artists would be unable to replicate. If it wasn't for such a strong performance for this role, the film would have inevitably crumbled, but it's very successful and makes a compelling basis for the film.

Director Rupert Wyatt has only one previous feature film to his name, the little seen 2008 thriller The Escapist. Despite this, he directs Rise of the Apes with competence and style and I expect this trial by fire will lead to hearing much more about this director in time to come.

I expected little from Rise of the Planet of the Apes which likely affects my final judgment for the film, but the film deserves it and it's ever so refreshing that Twentieth Century Fox didn't force the filmmakers to retrofit any of the current 3D or IMAX shenanigans onto a film that doesn't require it and for that I'm grateful. Rise of the Planet of the Apes is one prequel that doesn't cheapen the classic film that comes directly after; in fact, it makes it stronger and the classic reveal of the fallen icon at the climax of that film becomes infinitely more powerful. 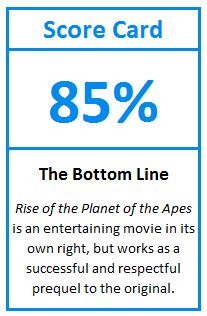