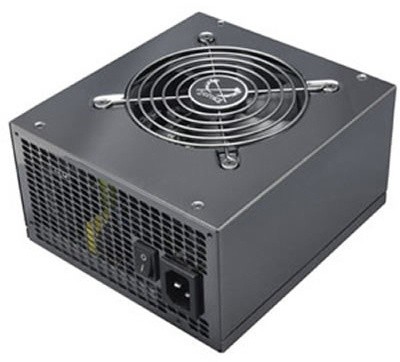 Scythe started out in 2002 as a Japanese based company wanting to produce quality products for PC enthusiasts. They hit it off big with their super quiet and super cool Kamakaze CPU cooler. It didn't take long for them to expand their product line, export products worldwide, and expand their base of operations around the world.

In 2004, Scythe established operations in the USA to work more closely with their American based partners and numerous manufacturers. Long has passed since the days of the first Kamakaze cooler and their products have evolved as well.

This time around we have the Scythe Kamariki 4 650W modular power supply that is getting run through the gauntlet in the TweakTown labs. It is aimed more towards the mainstream market for those that need to power a single high-end or dual mid-range GPU's. It offers plenty of connections for various internal devices, so read on to find out how it performs!

The Scythe Kamariki 4 650W modular PSU serves up two 25A 12V rails to provide plenty of power for power hungry GPU's and CPU's in a mainstream computer. While this isn't quite enough for someone looking to break benchmark records, it should be more than enough to keep the average Joe happy. 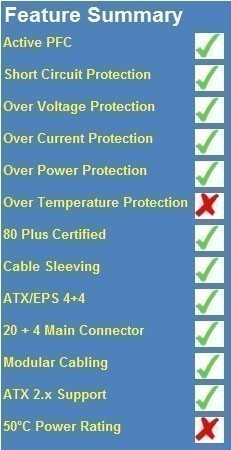 The Kamariki 4 650W retails for around $120. Scythe gives you just about everything you can expect for a PSU in that price range, only lacking the over-temperature protection (OTP) and 50c power rating. All of this comes backed by their 2 year warranty in the event that something goes wrong. Similar to what we've seen with our recent review of the Scythe Chouriki 2 1000W power supply, Scythes market penetration in the U. S. isn't spectacular when it comes to power supplies, despite having numerous companies backing them on their various other products. 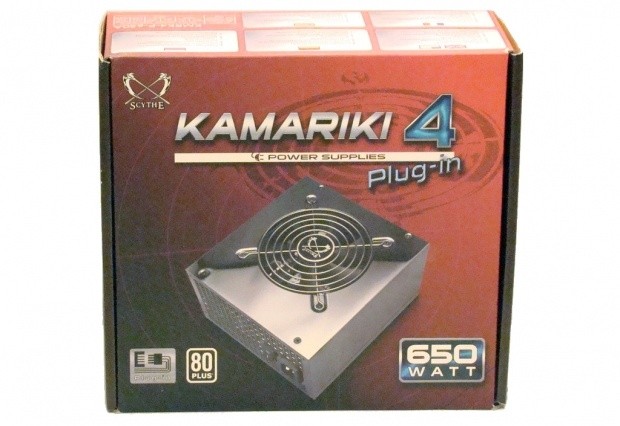 Scythe keeps things simple, yet informative on the packaging for the Kamariki 4. The front of the box lets you get a glimpse of what the Kamariki 4 looks like as well as states the major features that most want to know before looking deeper into the product, such as being modular, the output rating, and the 80Plus rating. 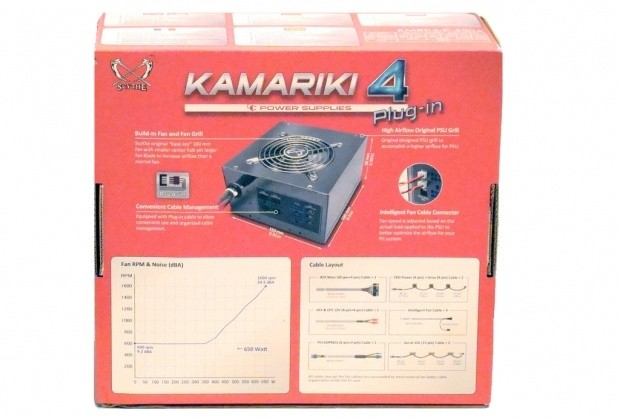 Moving to the back, we get a little more information on the power supply including cable length and connector availability, noise levels, and the ability for the PSU to control external fans based upon power supply temperatures. 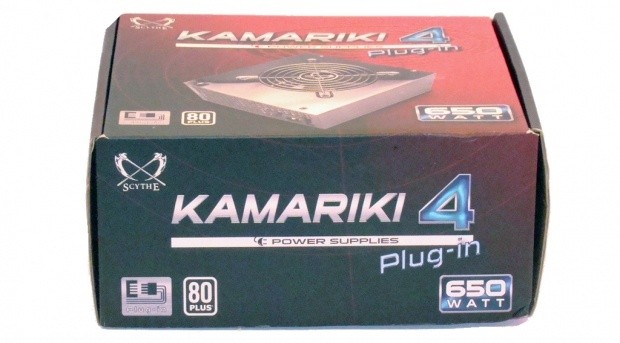 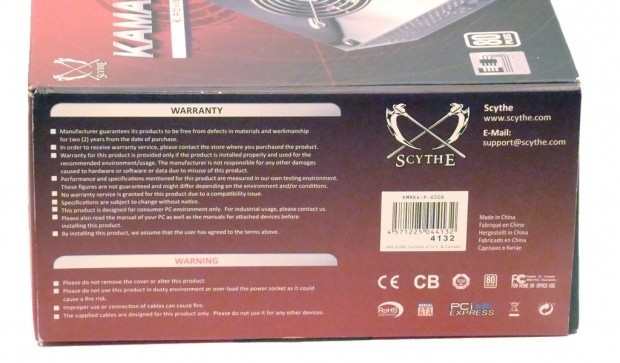 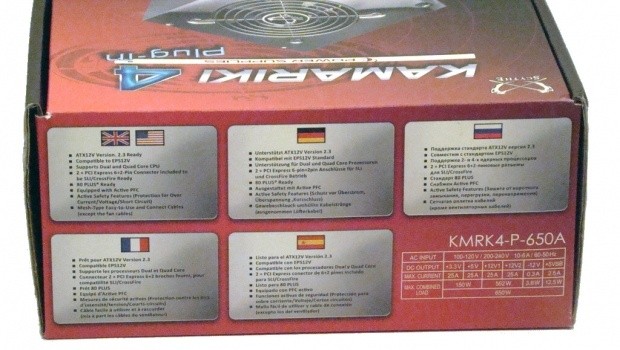 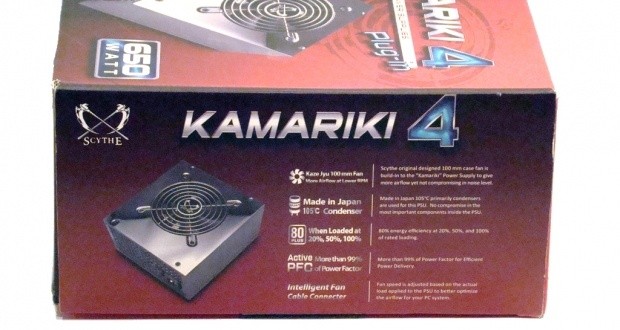 Checking out the sides of the box, we are able to see the rest of the features, warranty information, contact and website information, and the I/O specifications of the Kamariki 4 650W power supply. Note that the box states that Japanese 105c rated capacitors are utilized in the Kamariki 4. We'll dig into this once we pop the power supply open to check it out. 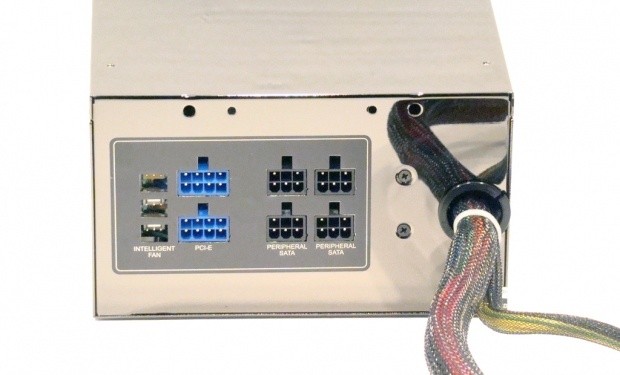 The front of the Kamariki 4 650W houses the modular cabling and the 3 fan output for controlling external fans. Notice the nearly flawless reflection from the permanently attached main 20+4 and ATX 4+4 connectors. 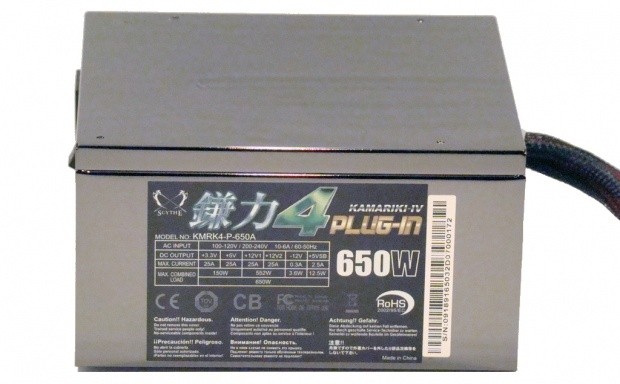 The side of the PSU shows off the I/O specification label for the Kamariki 4. The serial number has also been placed here, so that it is easy to find if needed. 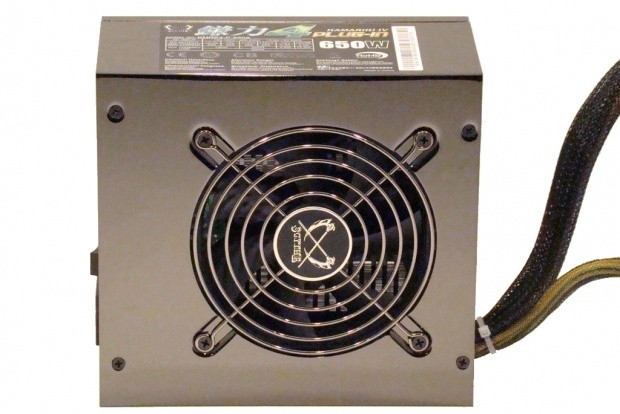 Scythe uses their 100mm Kaze Jyu fan for efficient cooling on the bottom of the power supply. This allows the Kamariki 4 to flow enough air to keep temperatures at an acceptable level, while keeping noise down to a minimum. 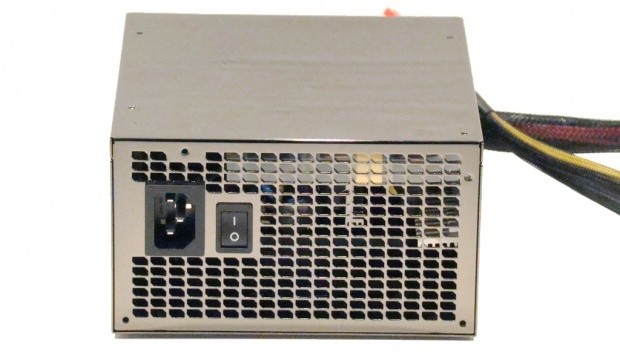 To ensure that the Kaze Jyu fan can push the hot air out of the back, Scythe keeps the back of the Kamariki 4 as open as possible. Approximately 80% of the back remains open for airflow with this design.

Something that we don't normally see used on a power supply is pictured above. This is a ferrite core of which you usually find on keyboard, mouse, monitor, and sometimes laptop power cables. Unfortunately I was unable to test and see if this made any sort of difference during testing, as I was unable to remove it without destroying the cable and didn't have another lacking the ferrite core. I hope to be able to revisit this in the near future.

Cabling Arrangement and a Look Inside

For a mainstream power supply, Scythe offers up plenty of connections with the Kamariki 4. Attached directly to the PSU are the main 20+4 and ATX 4+4 pin connectors. The rest of the cabling is modular and can be connected as needed. This includes a total of two 6+2 pin PCI-E cables, two Molex + FDD cables offering six Molex and two FDD connections, and two SATA cables offering eight SATA connections. Also included are three extension cables for fans if you opt to use the PSU to control their speed.

Rail distribution is split up amongst two 12V rails. The first rail powers the 20+4 main connector, one modular PCI-E cable and two modular peripheral cables. The second rail powers the ATX 4+4 cable, one modular PCI-E cable, and the remaining two modular peripheral cables. The external fans are also run off of the second 12V rail. 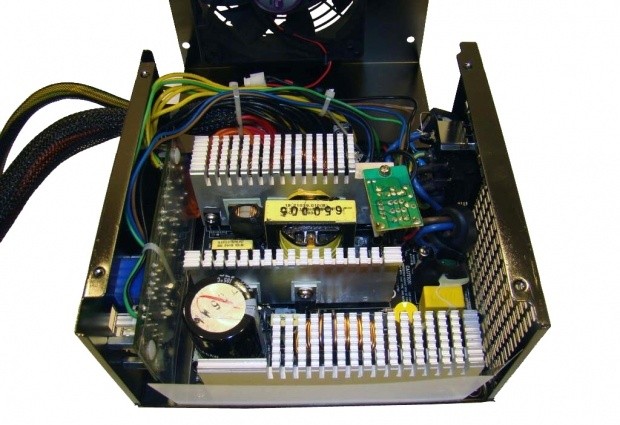 Opening up the Kamariki 4 shows a trio of heatsinks directly above the fan to help keep temperatures down.

Here we see where the two 12V rails terminate. Notice the capacitors that are pictured above. While these are rated at 105c just as the external packaging indicates, they most certainly are not Japanese. They are in fact Taiwanese and manufactured by the Transcend Electrolytic Co. (TREC). This is a tad misleading on Scythe's part. 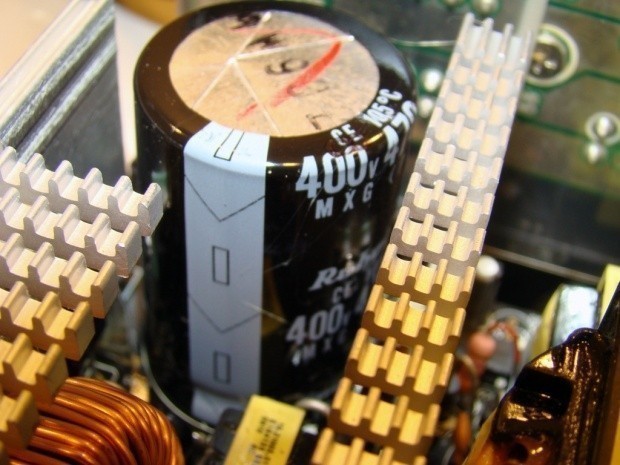 Over on the other side of things, we see that the primary caps are in fact Japanese Chemi-con capacitors and are rated for 105c. It would be nice to see Scythe stick to strictly Japanese capacitors for the best quality.

The tests performed are based around six conceivable setups that are out there and progressively load down the PSU up to the power supply's limits or 1000W, whichever comes first. Since our test equipment's limits are greater than the Scythe Kamariki 4 650W PSU, we can test it to the maximum.

While the Scythe Kamariki 4 650W power supply passed all four of our tests, it did so just barely. In fact, it couldn't have come any closer to failing due to the voltage on the 5V rail at maximum load. If it had dropped just another .01V, it would have been outside the ATX specifications. Things weren't looking that great on the 12V1 rail either, with a reading of 11.60V at maximum load. However, when it's all said and done, a pass is a pass.

The Scythe Kamariki 4 is a beautiful unit with plenty of features for a mainstream power supply. It has several things going for it such as aesthetics, modular cabling, plenty of connections and cables, and the ability to control fan speed via the built-in controller.

However, there are a lot of things that the Kamariki 4 just doesn't have going for it as well. Internal packaging could be much better, Taiwanese capacitors, and nearly failing voltages just don't cut it in the cut-throat mainstream market when power supplies of similar wattages, features, and perhaps better quality can be had for as much as $30 less with longer warranties.

As a mainstream PSU, the Kamariki 4 certainly is acceptable, but other existing models that we have tested are superior since they offer lower cost of ownership and better performance.