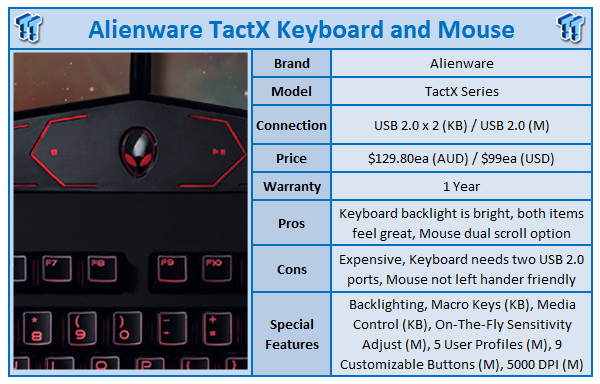 So you're a fan of the ol' Alienware brand, but just don't have the money to get in on a full blown Alienware rig? Now, for a whole lot less than a new system, you're able to have your own Alienware logos in front of you; the Alienware TactX Keyboard and Mouse that are now being sold separately.

Unfortunately, our samples didn't come separately like they would if bought direct from the AW website. Instead, we received a package that came with an AW system; a box that looked like it had been around since inside we didn't have much. 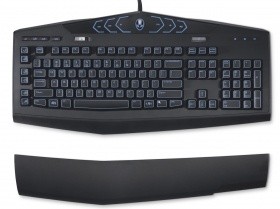 With that aside, let's look at what exactly we're dealing with. First, we have the Alienware TactX Keyboard. Out of the box it doesn't look all that exciting with a matte black finish and each key having white letters and a white border.

Once we plug in the two USB cables into the back of our PC we're up and running. A shiny glow can be seen throughout the whole keyboard. Our understanding is that the two USB cables are needed to power the light which we have to say is extremely bright; significantly brighter than the back lighting in the G15 and G19 Logitech keyboards.

With the Alienware brand, we expect the unit to be aimed more at gamers and we seem to have all the keys that gamers would want. Six macros down the left, above that three Macro switches, and another one that helps setup the macros. Above the F3 and F4 key we have a toggle switch that disables the windows button so you don't accidently bump it in a heated fight. Heading to the other side of the keyboard, we've got a button that lets us mute the volume.

Dominating the top of the keyboard we've got the backlit Alienware head. To each side of that we have three media control buttons. The left side offers us skip backwards, skip forward and stop. The right side offers us Play/Pause, Volume Down and Volume Up.

The overall feel of the keyboard is beautiful; the buttons are soft and both typing and gaming are easy to do. The backlighting is the stand out feature on the keyboard; it's extremely bright and looks fantastic at night. The ability to choose from a huge array of colours for the main keys and the media keys / AW logo means that you can make it literally look how you want. My G19 backlighting does look quite dull against the TactX Keyboard.

Now let's move on to the mouse. Once again the first look is quite uneventful; we've got the same plain matte black setup. A closer look tells you that some thought has gone into it though, and once cupped with the right hand feels great. 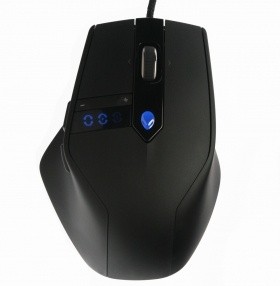 We've got a fairly large button line up. The typical left and right are seen along with the back and forward thumb buttons. We've also got a scroll wheel which can also be pushed down and click left to right.


Also present are another two buttons which give us the ability to adjust the sensitivity on the fly. With this being a 5000 dpi mouse, you can really get some speed and while it's not the highest dpi we've seen to date it's still extremely high.

The sliding one isn't bad when working but when it comes to games the lack of the real feel means that selecting weapons via the scroll can be quite a task. The fact you don't have to worry about this is fantastic. It's a nice little feature that helps the mouse stand out. 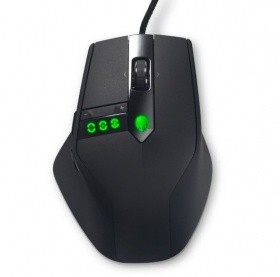 Using the mouse is really nice like the keyboard; it's very smooth and for a right handed male is extremely comfortable. Using it with your left hand isn't so comfortable; it could be used but there's better options for left handed people.

When it comes to the software you begin to realize why everything feels so great. When you open the file you see that the publisher is Logitech and it's clear that Logitech are behind making the mouse and keyboard for Alienware.

The software itself isn't anything too confusing. You've got the normal array of options and for the keyboard you can select the colours you want to use. You can also setup your macros for both the keyboard along with profiles for each device.

The mouse software offers slightly more options with the ability to set the DPI settings and what DPI you want to use at which preset on the mouse. Here you can also configure all those buttons that we mentioned earlier.

Ultimately the Alienware is a Logitech G9 and the G9 is a fantastic mouse. The biggest flaw with it is the same as the TactX one as it's really only suited for right handed people. The keyboard on the other hand resembles the G series keyboards from Logitech.

Looking at the TactX gear in two views one is a real win and the other is a slight loss. If I purchased an Alienware system and this was the keyboard and mouse I received, I would be very happy as it blows away most other systems packaged keyboard and mouse.

If I already have a gaming PC, buying the TactX gear over some other devices just isn't as appealing for one reason: the price. The TactX gear has an RRP of $99 USD and $129.80 AUD, now compared to the RRP of other brands gear like Razer and Logitech the price isn't bad, but you don't pay RRP pricing for keyboards and mice.