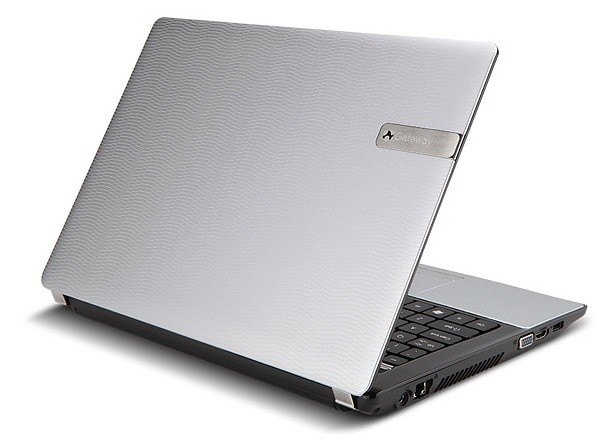 One of the more common types of notebook computers that people shop for are the multimedia variety. These machines can be used as your typical PC for work and play, but have features that are aimed at the user who enjoys watching online video and movies on the notebook frequently.

Typically, when we see a multimedia notebook, it also has a massive screen making them less suited to mobile use than your average notebook with a 15.6-inch screen or smaller. However, you can find a multimedia machine that has an average sized screen.

The Gateway NV59C09u has a good price considering it has a Blu-ray player and an Intel Core i3 CPU inside. The MSRP direct from Gateway for the machine is $799.99.

You can view the full specifications of the Gateway NV59C09u below: 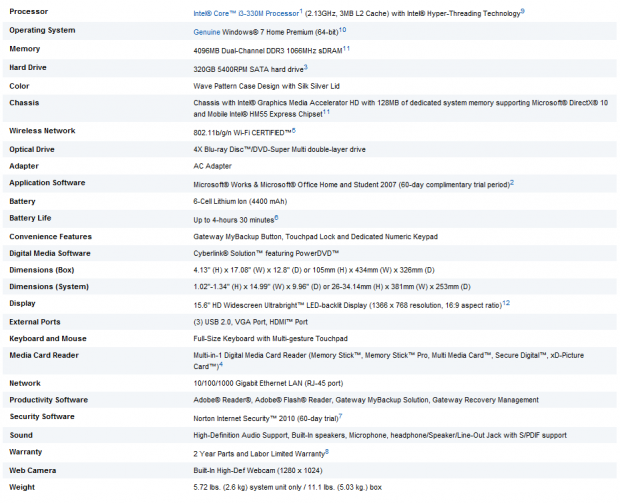 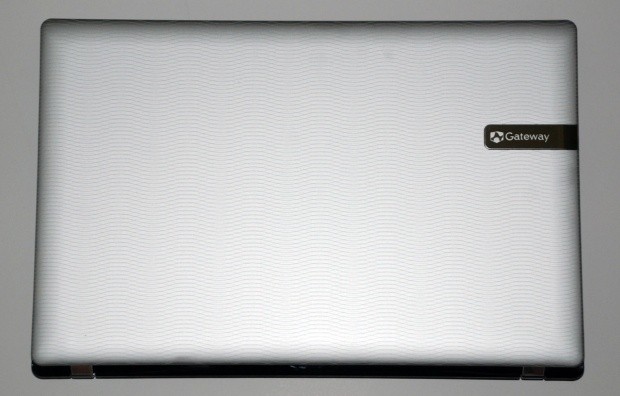 The top of the Gateway NV59C09u is really nice looking. The silver is matte finished to help ward off fingerprints and the design on the lid is attractive.

The bottom of the machine has the battery and several cooling grates.

The backside of the machine is bland with only shiny hinges for the screen to see.

The right side of the notebook has the Blu-ray drive and a pair of USB ports along with the Kensington lock port.

The front edge of the notebook is where you find the memory card reader and some indicator lights.

The left side of the Gateway NV59C09u has the power port, VGA out, HDMI out and RJ45 port along with a cooling grate and headphone/mic ports. 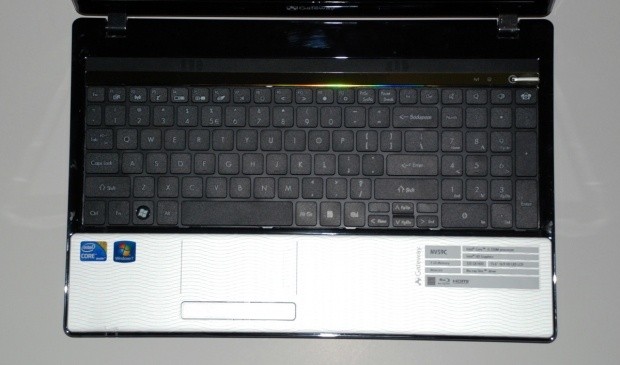 The chicklet style keyboard has a number pad and full size keys. 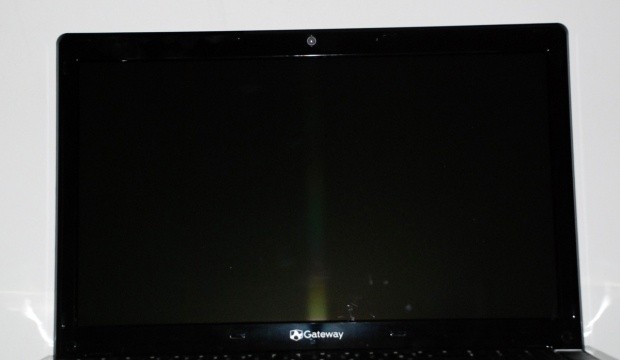 Yep, that's a glossy glare prone screen for you to enjoy with a webcam at the top. 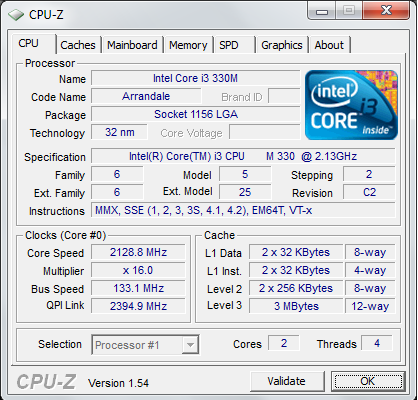 The Gateway NV59C09u will be run through the standard netbook test regime here at TweakTown. This includes iTunes Encoding and Media Transcoding plus Battery Eater Pro for battery life estimation.

Please note that no 3DMark or game tests are included for our notebook/netbook reviews if they are not powerful enough to run the graphics intensive tests. All systems are tested "as is", which means operating systems and drivers can and do vary and some come pre-installed with applications that may or may not affect performance. Any anti-virus or security applications are disabled and uninstalled before any testing is started as they can affect test numbers. 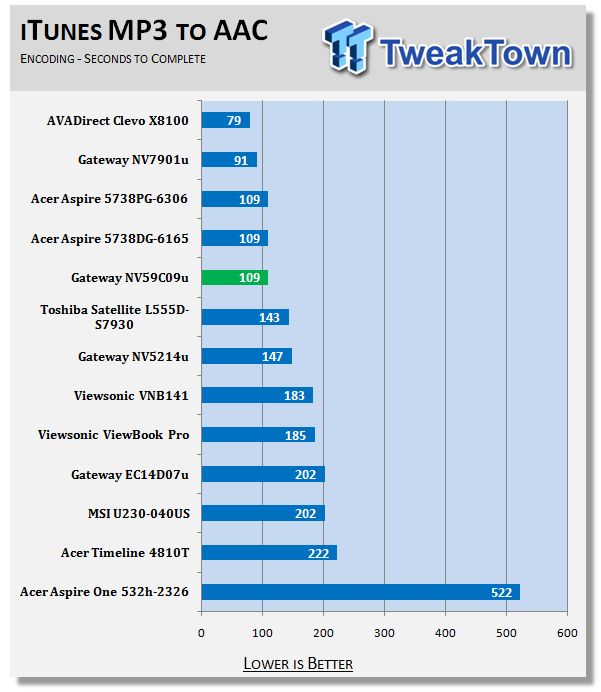 The Gateway NV59C09u was in the top five in performance for the notebook realm for the iTunes encoding benchmark. 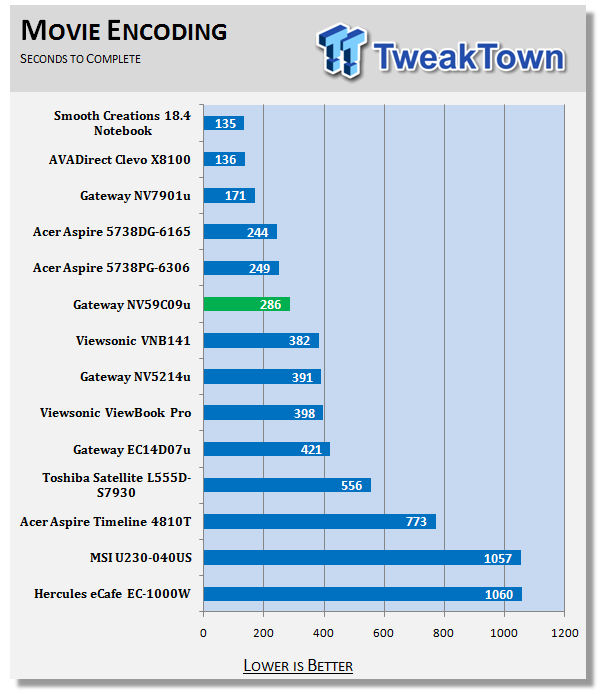 The Gateway NV59C09u was just outside the top five machines on my notebook chart in performance with solid performance overall.


Battery Eater Pro is very hard on batteries, so you are likely to get more run time in the real world, depending on how you use the machine. Since we compare all laptops and netbooks the exact same way, though, it creates a fair and balanced playing field for our comparisons. 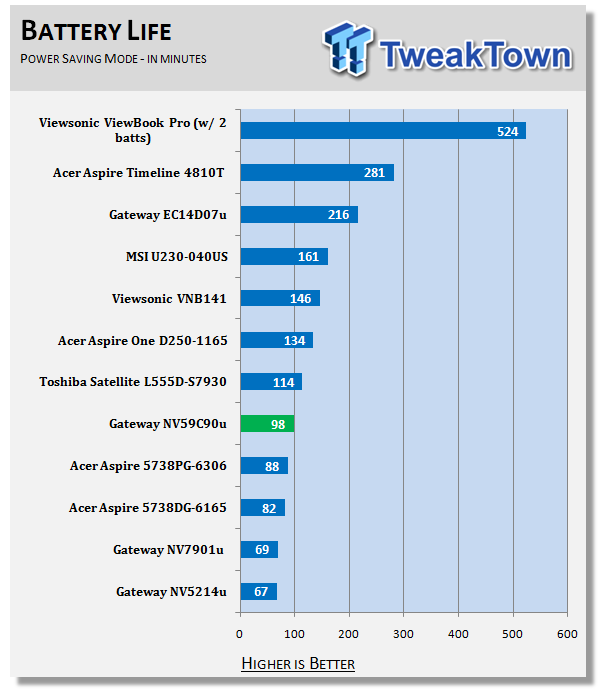 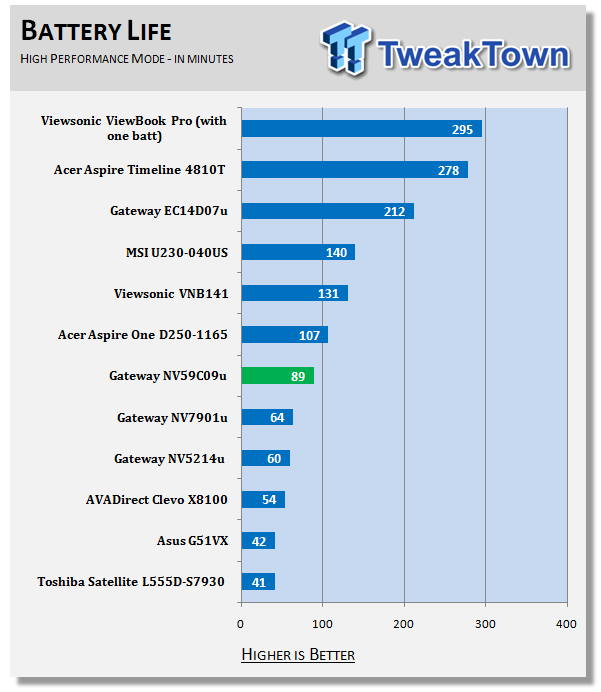 The Gateway NV59C09u is in the middle to lower middle of the machines I have tested. This is not the sort of machine you choose if all-out battery life is your goal, but the machine is a solid all around performer, all things considered. 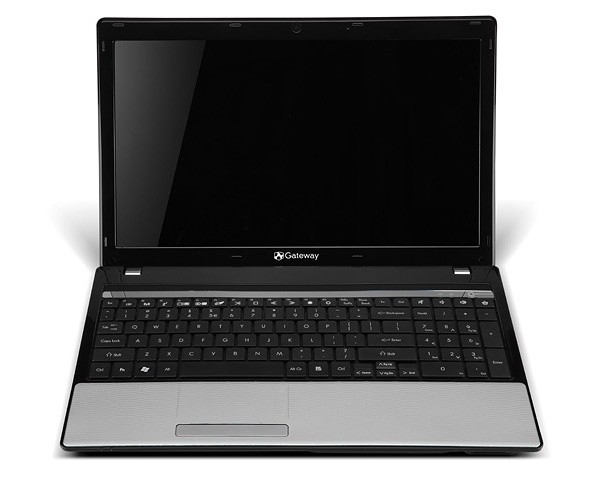 With the benchmarks over, I can get into the hands on portion of the review, which is where I like to see how the real world meets up with the benchmark world. I really like the looks of the Gateway NV59C09u; the satin silver finish with the print is a nice change from the Gateway notebooks I have been seeing with glossy lids that attract lots of fingerprints.

Flip that attractive lid up and you get your first glimpse of the keyboard with the chicklet design that is very popular in the market. The keys are sized well and all the keys are where they are supposed to be. The Gateway NV59C09u is large enough that you get a full number pad along with multimedia keys accessed via the FN button. Typing feel is good and the keys have a nice click when pressed.

The machine has a decent sound system that suffers from the same lack of bass and overall character in audio quality that plagues the notebook and netbook industry. The sound system Gateway has chosen is average for the market with enough volume for listening without headphones.

The screen of the Gateway NV59C09u is glossy and suffers from glare in bright rooms, as is expected with 99.9% of notebooks today. The screen has decent color reproduction and only slight pixilation was noted in some fast action scenes. The Intel HD graphics could use more muscle. Streaming video from Hulu was smooth in windowed mode, but full screen viewing introduced a bit of lag and chop to the video. You could still watch, but my eyes craved the smooth playback machines with more graphics muscle offer.

You might be wondering how it is that the Gateway NV59C09u can pack in a Blu-ray player and 4GB of RAM while keeping the price down. The storage is one place that Gateway cut back; 320GB is more like a netbook storage capacity today rather than what you expect from a multimedia machine. I would have liked to see at least 500GB and that much storage couldn't have added much to the price. The lackluster GPU is another place money was saved; this machine would be on a completely different level with a discrete GPU inside.

Due to the nature of some benchmarks where scores having a lower is better result, we've had to change the way we do the numbers when compared to other products. Battery life numbers in performance and save modes are combined outright since higher is better. In iTunes encoding and movie encoding where a lower number is better, we have a base number of 2500. The score we get from the machine in iTunes and movie encoding are both subtracted from that base number and then added to the sum of the battery life scores for the final score. 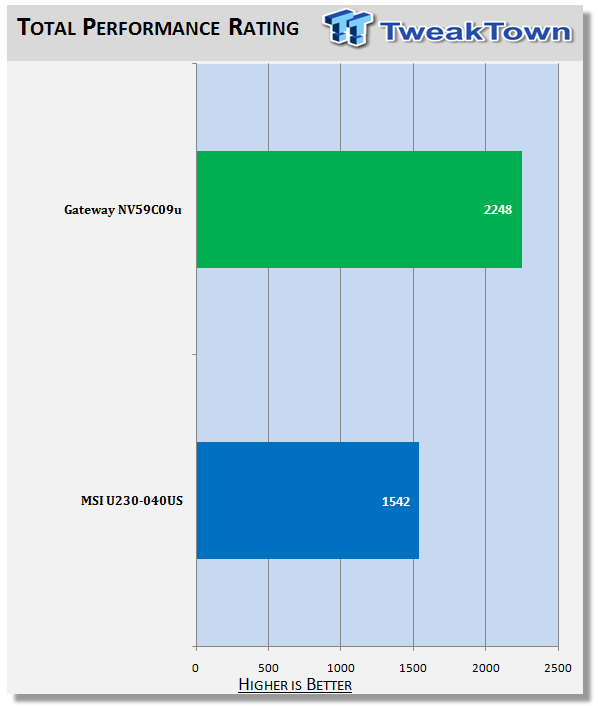 In the event we can't source a price from either, the product will not receive a TVR rating. As with our TPR graph, the amount of netbooks and notebooks on the list will grow over time and the price of the model won't change from what it was when first reviewed. For this reason, the USD price that the kit is based off will be included next to the name of the model. 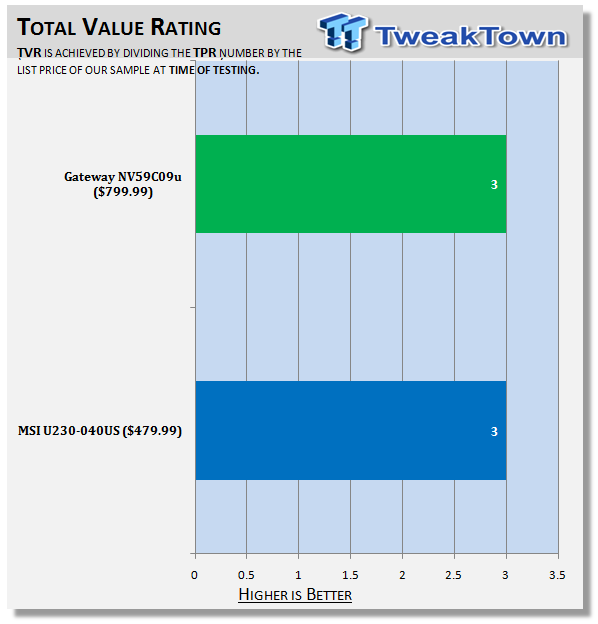 At the end of the day, the Gateway NV59C09u is a solid all around notebook with nice multimedia features hampered by lackluster GPU performance. If Gateway had opted for a better GPU and a larger hard drive, the Gateway NV59C09u would score much better. At the same time, adding a larger HDD and a better GPU would also drive the price up, hurting the overall value of the machine.

This machine is best suited to the user who will occasionally watch video and when they do want to watch, expects Blu-ray and passable HD streaming from online sources.