Halo headphones are the brainchild of a woman by the name of Kristen Black who has already received some acclaim for the idea, being listed in an Australian 'smart 100' index. She is also featured in other finalists lists for design competition according to the website. 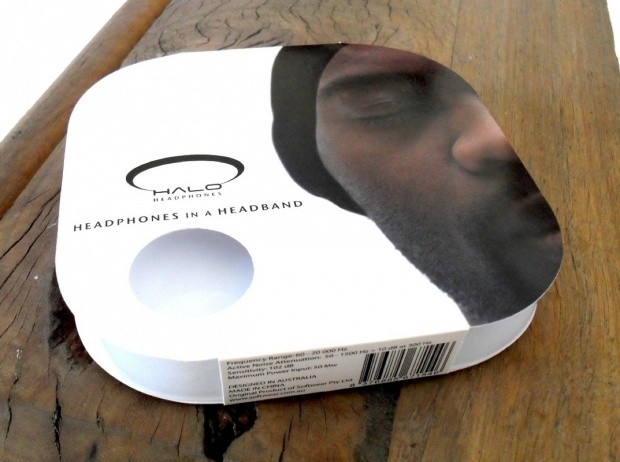 There is always room for new innovations, especially in a time when portable devices are immensely popular.

Today, though, we have a set of the new Halo headphones in black. And I am interested in how they are going to sound given the fact that I have not seen anything similar before. 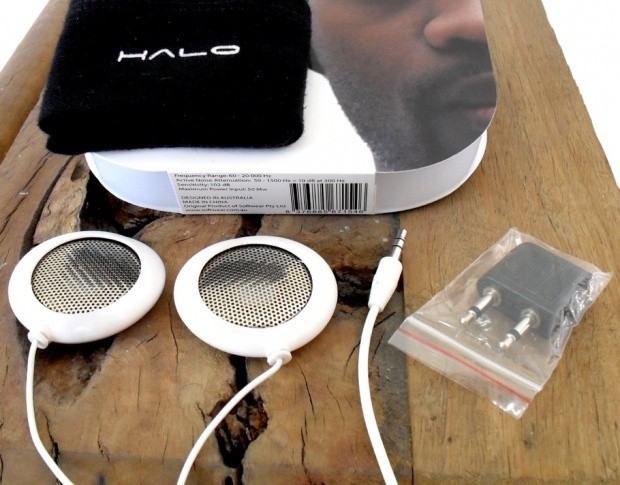 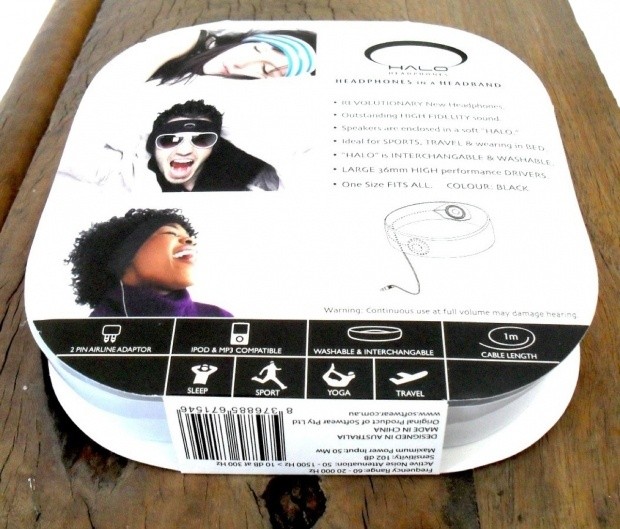 Now that we know what we are dealing with, let's take a closer look at the package and contents to see what's included.

Inside the Halo headphones' attractively designed packaging can be found 'one size fits all' headband made from what one might assume to be the same material used for athletes sweat bands. Further to this are two small white speakers incased within a molded plastic shell. 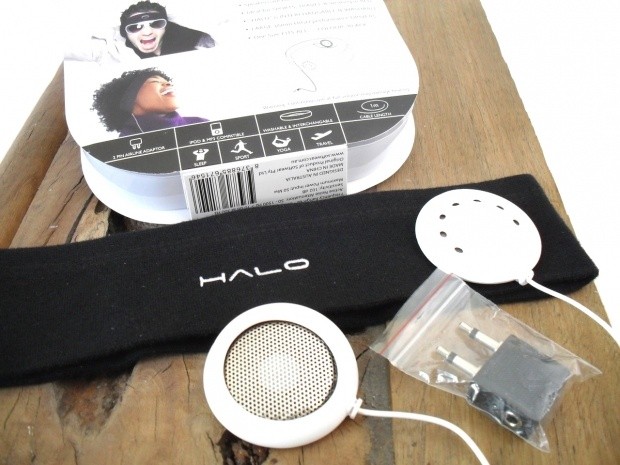 On the other end of the speakers themselves, we find a single stereo mini-jack cable for connection to portable devices.

There is also a stereo splitter used for taking the system onto planes if one was so inclined.

When it comes to paperwork, I think the decision has been made to save some paper and not include any, which these days is not a bad idea for a number of reasons. 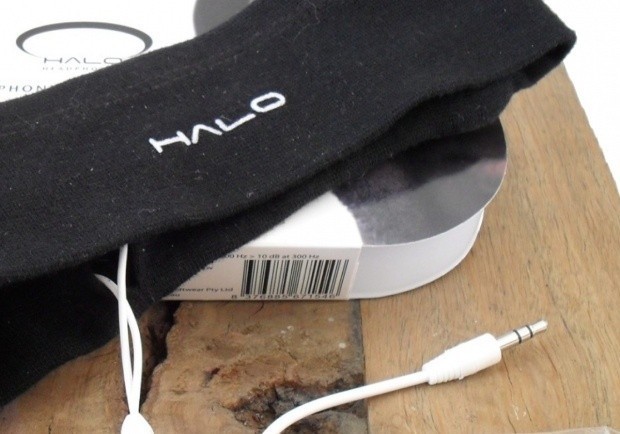 Technically things are pretty standard with a small but reasonably sized speaker for each ear (36mm) and the use of the fabric sweatband to actually en-close the speaker. 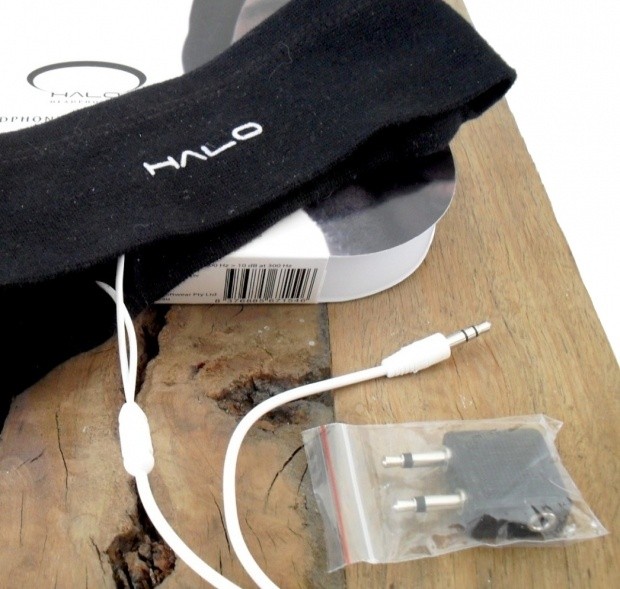 To be frank, I cannot believe someone has not thought of this before now, especially given how often small ear buds fall out and how bulky full sized headphones could be while working out.

So, it's top marks for innovation then. I actually looked out the window and saw a young girl jogging by wearing the Halo headphones yesterday. So we can be sure the marketing team is functioning well, too. 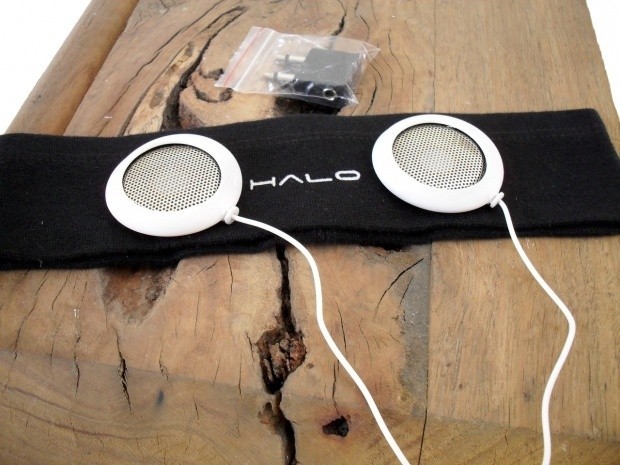 In all honesty, when I saw them being used, albeit vicariously in the environment they have been designed for, I thought that is really not a bad idea at all.

So, I think the main focus of this particular review is really on the ease of use and function of what is undoubtedly a fledgling product which I am sure will be taken back and forth to the drawing board numerous times as demand and interest spike over the coming months; possibly even years. 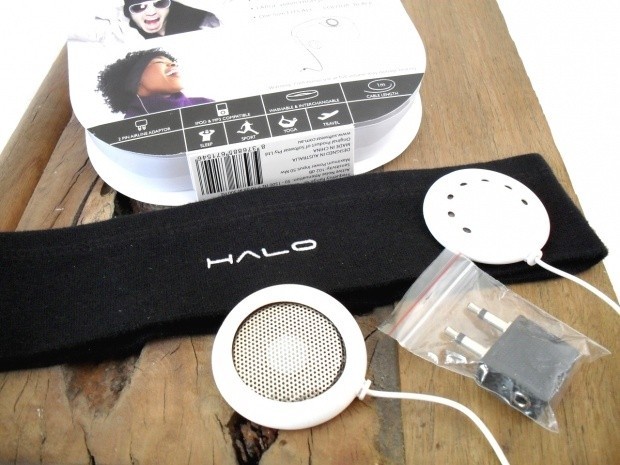 Now, regarding the specifications of these headphones, the only real figure of interest here is the 'active noise cancellation' which one thinks would provide a hardware based filter which acts between 50-1500Hz with as much as 10dB of attenuation at 300Hz. 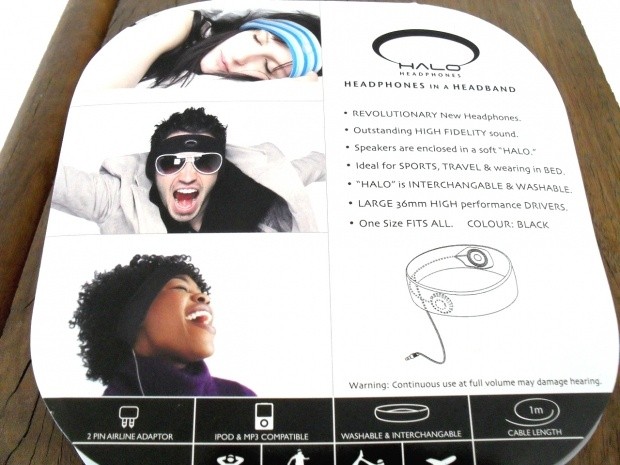 Basically, noise cancellation is something designers of headphones have been trying to perfect for some time. I think some companies have even perfected the art these days, but at some considerable expense to the buyer. But it's nice to see some effort being made here to include a feature not seen of headphones costing several times the price.

Now it's time to plug everything in and see how things sound out of the box. 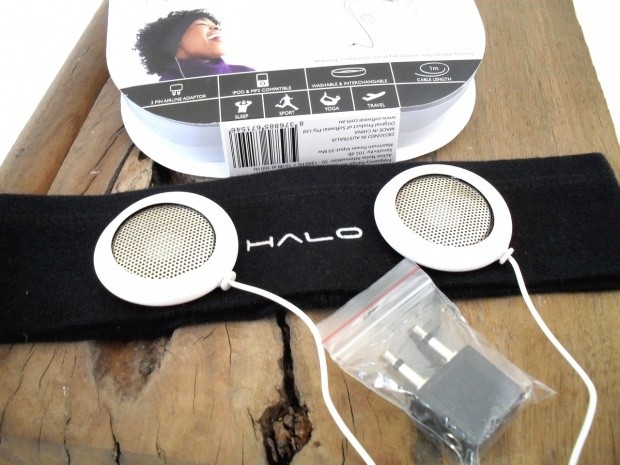 Once the Halo headphones have been taken from their humble packaging and inserted into the small slits in the sweatband, it's time to connect them to something and take a listen.

Just a second, though. The design of this headband is not perfect. Firstly, it is simply too difficult to insert the earphones into. Secondly, making sure that they are positioned correctly is also very difficult.

I think that improving the headband itself should be an area of focus in later models. 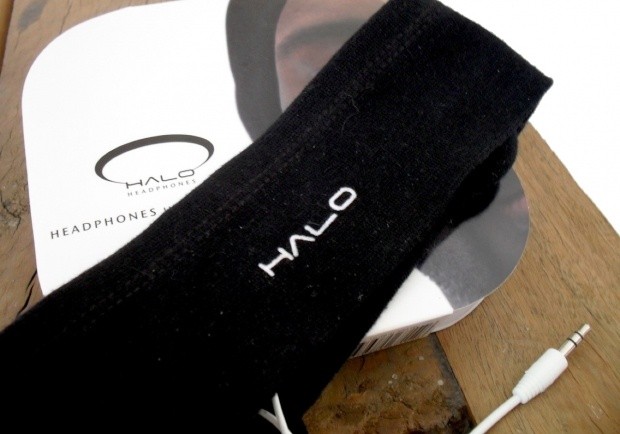 It's time to find out how these things sound in the real world. 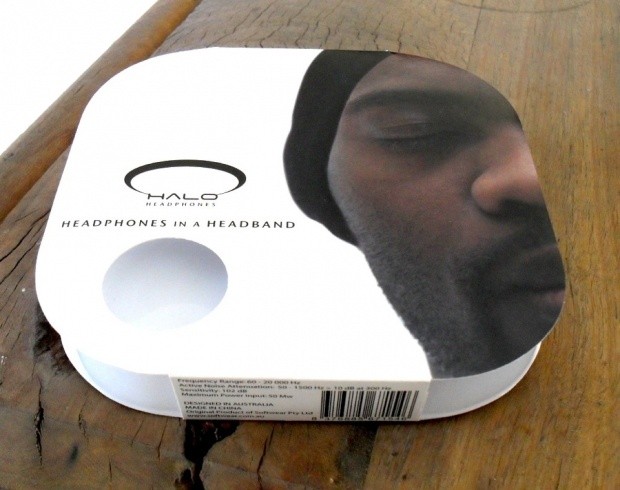 Note: Due to the large variation in testing requirements between the products I review, I would like to introduce a more compact 'results' portion of the article starting today. While for larger articles I will still retain my 'classic' format, I hope that for these less involved products I can bring to you an easier article to read.

During my testing of the Halo headphones I found the sound being produced to be quite impressive given the small simple nature of the headphones. However, it takes a fair bit of mucking around to position them correctly which is an important factor given the fact that the drivers themselves are not mounted in anything at all and must be located within the headband evenly.

It's also important to get the right positioning in that it allows the bass not to be lost due to a poor fit around the users head. Bass performance varies a lot depending on how these headphones are worn by the user. If the drivers are located just a couple of millimeters too far away from the ear, low end performance suffers a lot. However, once a balance is found I did not have any problems or complaints, but it is essential that proper position on the users head is found in order to replicate this. 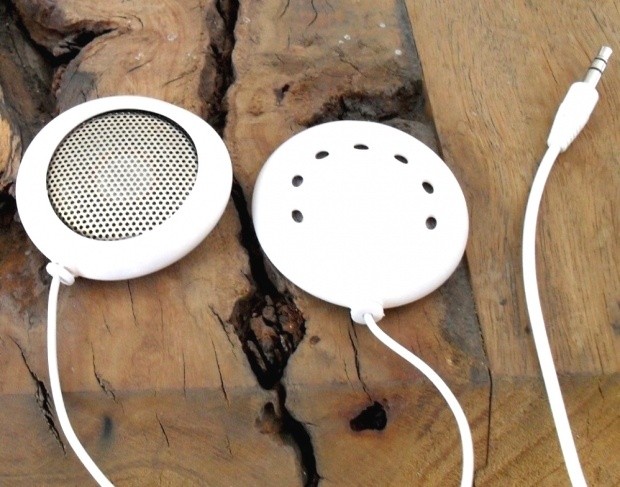 I thought that the mid range sounded surprisingly open and transparent given the limitations involved. Guitars and percussion came through with easy warmth that frankly, I was not expecting.

Even when observing some of my test tracks, Sax solos, that I have heard many times, I was impressed at how calm and mellow they sounded. In fact, these little drivers really should not sound this open and transparent. So, I think at this point we can conclude that the Halo headphones are using quite a decent little speaker to mount in the headband.

Overall, I found musical testing to be surprisingly enjoyable. It's difficult to know what to expect when dealing with a new company, as always.

The design element is very simple indeed, consisting only of a pair of rubber coated speaker drivers and a black headband with a small slit in it. And I think it's for this reason the Halo headphones work as well as they do; they are simple and they work as intended. They do not need to worry about being compatible; they simply work right out of the box. The sound quality is above average and surprised me a little bit with its open mid range and overall non-intrusiveness.

The headband itself could be of higher quality, even managing to look worn right out of the box for my photo shoot. And if I'm being honest, this is the area that needs work. Fitting the earphones is difficult to the point of nearly breaking the band and once they are in do not convey much of a feeling of being at their ideal location relative to my ears.

Overall, though, the Halo headphones are a good idea that is well packaged, is quite well thought out and sounds pretty good to boot. There is always a risk when appealing to such a niche market, though, so it's going to be important for this company to carve out a share for itself sooner rather than later.

I look forward to seeing what is next from this innovative new company.