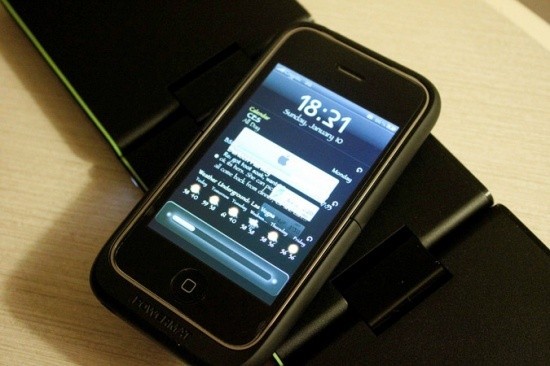 
Over one hundred years ago (roughly 1893), a man by the name of Nikola Tesla showed the world that it was possible to send electricity through the air to power items. In his first demonstrations he powered simple incandescent light bulbs. Later he was able to show his theory on a larger scale, but unfortunately wireless power did not take off and after Tesla died in 1943 many of his theories, discoveries and ideas seemed to have died with him.

However, as with many things that seem to have passed, Nikola Tesla finally received his due in the world of electrical engineering. His works have become the source of many modern inventions and he (much like Einstein) is being proved right over and over again. One of his earlier theories which concerned powering devices wirelessly by manipulating the magnetic flux surrounding them, has found a home in Powermat's line of wireless charging devices.

These are the Powermat magnetic induction charging mats and receivers. You can get these for around $100 for the mat (either travel or home) and $30 for the receiver. Follow along as we take a look at this "new" technology and see if it can really untangle all the cords in your house.

The boxes that the Powermat portable mat and the iPhone receiver case come in are interesting; they are setup in a way that even viewing them on the shelf will grab your eye. 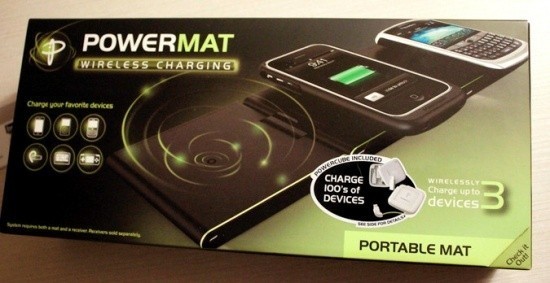 There is a large image of the mat with two commonly used devices apparently charging. Powermat has also made sure that anyone picking this up will know that they will be able to use it right out of the box. 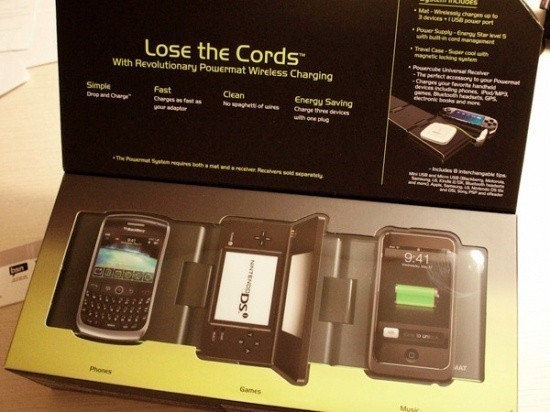 Opening up the front flap, you get a view of the actual product with more images of typical devices charging. Powermat has also placed words like "simple", "fast" and "clean" in large green letters. These have an impressive impact on a potential buyer. 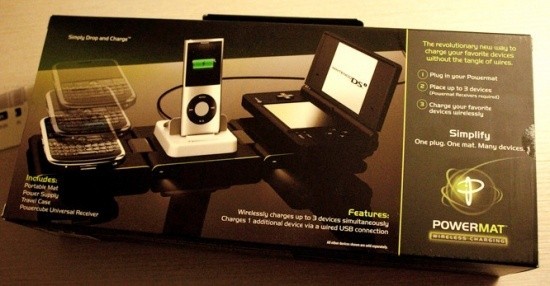 The back is only more of the same, but does complete the whole. I have to say that this is one of the best designed product packages I have seen. When I looked at this in a local Target, I saw many people pointing to the images as confirmation of how well this product met their needs without knowing anything about it. Well done to the Powermat marketing team. 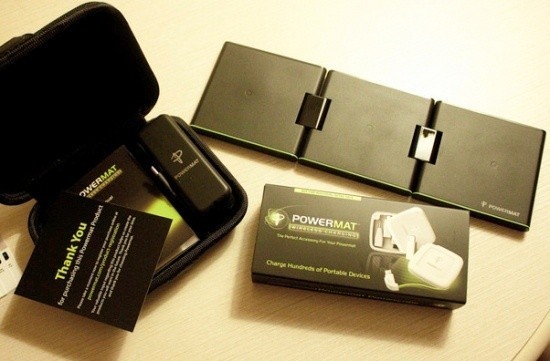 Inside you will find everything you will need to begin using your new Powermat portable mat to charge a single device. Powermat has included a three place charging mat, power adapter, a powercube and a handy case to carry it around in. 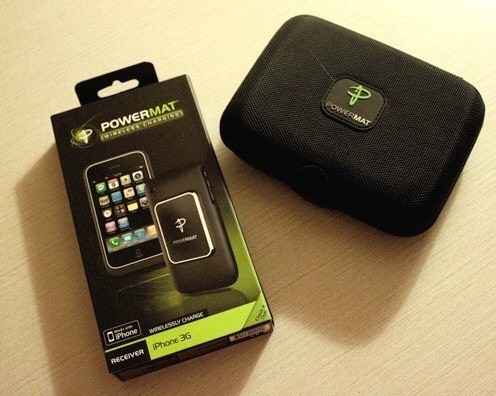 Again we see that the marketing team from Powermat have done their job well. 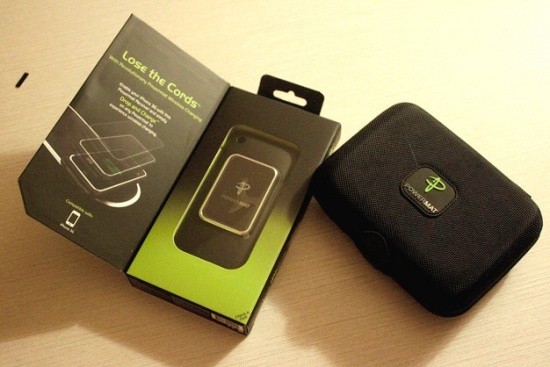 As with the Portable Mat box, we see another flap that allows you a view of the product inside. 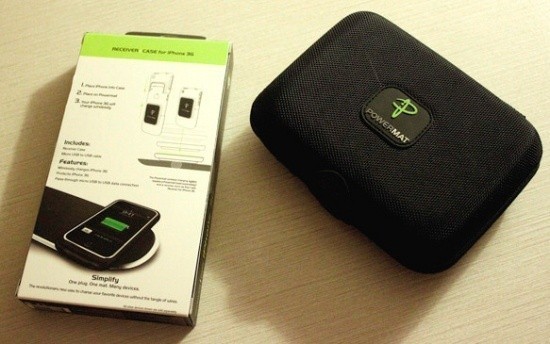 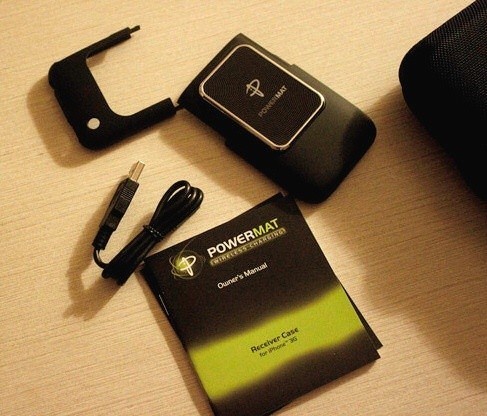 The contents of the box include not only the receiver case, but also a USB cable that allows you to charge the device in the conventional way and also to sync the iPhone with your PC or MAC without the need to remove the case. 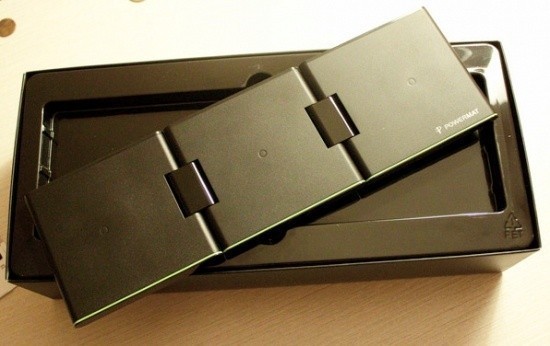 Taking a close look at the Portable Mat, you can easily see three distinct charging pads. Each of these is capable of charging a single device wirelessly. These pads use the principle of magnetic induction to move charging power from the pad to the device. This is one of the many principles of wireless power that Nikola Tesla proposed over one hundred years ago.

But the Powermat Portable Mat has a few more features besides the three charging pads. Along the back side of the mat, near the port for the power cable there is a single USB port. This can be used for wired power, making the single Portable Mat capable of charging four devices. There are also two buttons there; one controls the volume of the connection sound and the other controlling the LED charging indicator.

The Portable Mat can be folded up to store easily in the provided travel case, making this an easy choice for powering your devices on the go.

Internally the Powermat charging devices are very complex. When you place your device on a pad, it creates more than a magnetic "contact" for charging. Internally the receiver identifies the device and coveys this to the pad during its "handshake" phase. Once this is done the pad knows the amount of power to send the device. This allows the Powermat charger to stop charging once the device informs it that its battery is full.

This handy feature allows the Powermat to reduce the amount of power it draws from the wall and somewhat validates Powermat's claim of power savings when using it to charge electronic devices.

As we mentioned just before, the Portable Mat comes with a Powercube adapter. This allows you to charge almost any device without the need to buy a special receiver case. 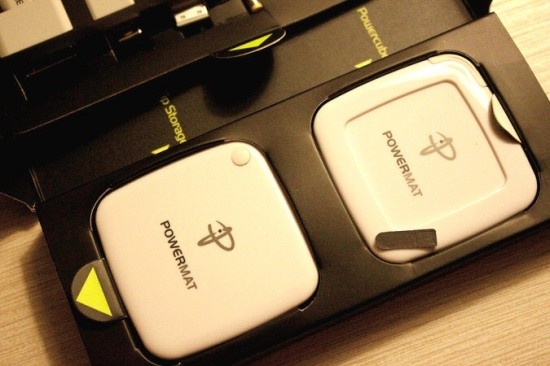 The Powercube is not actually a cube, but is a flat square that contains a receiver unit and a short cable that ends in a mini-USB connector. Powermat has also included a small case that fits on top of the charging receiver and can hold one or two charging tips for portability. 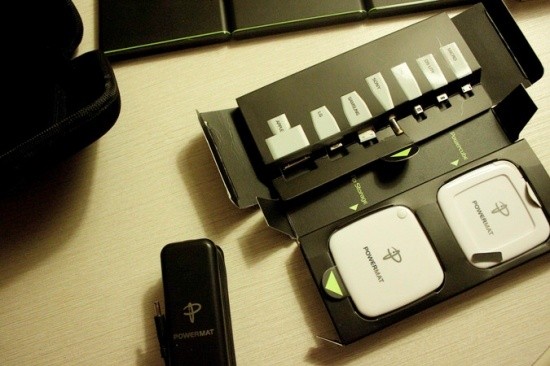 Powermat has included seven charging tips which cover most of the common electronic devices. These include Apple (for older iPods etc.), Samsung, LG, Sony, Nintendo DSI and DS Lite and a Micro USB adapter. 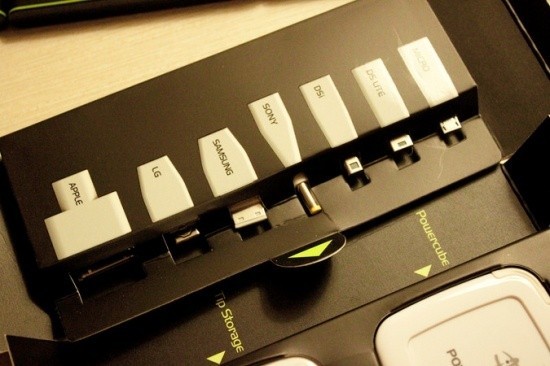 Performance and How it Works

As we've mentioned, the Powermat charging system works on Nikola Tesla's principle of magnetic induction. But while this is the mechanism for the transfer of power to the device, there are other items at work.

One of the first items is the most simple and part of the actual workings of the charging mechanism. This is the magnets that are in both the receiver and the pad. These will connect and hold the two together in the proper alignment and also help to maintain good and solid contact between the two.

Once the magnetic contact is made, the receiver sends a signal to the pad identifying the device. This RFID handshake helps with charging efficiency. Once the RFID handshake is successful you will hear an audible confirmation and an LED on the side of the pad will light.

From there the receiver and pad will maintain the charging connection until the device sends a signal saying that it is full. Once the battery is full the Powermat will shut off power and enter a listening mode. In this mode it will check the charge level of the device and begin charging again if it detects the battery has been used.

The upshot of all of this is that the Powermat pair (receiver and pad) are very efficient. They are able to charge almost as fast as the regular wired adapters while lowering the amount of power drawn from the wall.

In our testing we found that the iPhone 3G S would charge from a drained battery only two minutes slower than the traditional corded charge and as much as ten minutes faster than charging the iPhone from a USB port.

When I first saw the Powermat devices on the shelves in Target and Best Buy, I had my doubts about it. It seemed to me to be a new attempt on an old trick. As I watched this product sell out over the holidays, I thought it nothing more than a fad. However, my mind was changed when I had the chance to talk to the people at Powermat at CES this year.

I saw the level of commitment to the technology and a desire to continue to evolve their offerings. This led me to test the Powermat with an open mind. I took a look at what Powermat was claiming and what their devices actually bring to the table. What I found is that it really does do what Powermat claims; since receiving the Portable Mat and receiver case I have replaced the normal charger for not only my wife's iPhone 3G S, but also use the Powercube to charge my kid's iPhones (they share that connector) while leaving a single USB cable connected to the Portable Mat so that all four phones can be charging at the same time without the need to have them spread out over the house.

But, beside the return of multiple power outlets in my house; I got something else. For the first time since we all got our iPhones, I have a clear counter; this is worth more than I can say. Gone is the "bucket" full of USB cables and power packs and in return I now have an open space with only the Portable Mat in its place.

Over all we can highly recommend the Powermat Portable Mat and Receiver case for iPhones. It is an excellent product despite the price ($100 for the mat and $30 for the receiver case) and one that actually provides what its marketing claims; something that is rare in this day and age.