All NewsBusiness, Financial & LegalCases, Cooling & PSUContests & GiveawaysCPU, APU & ChipsetsDealsDisplays & ProjectorsGamingMotherboardsScience, Space, Health & RoboticsStorageVideo Cards & GPUsVirtual & Augmented Reality
All ReviewsAll ArticlesAudio, Sound & SpeakersCases, Cooling & PSUCPUs, Chipsets & SoCsComputer SystemsDisplays & ProjectorsGamingMotherboardsNetworkingPeripheralsRAMStorageVideo Cards & GPUs
GuidesGamingAsk the ExpertsNewsletterAboutPrivacyForums
AMD Zen 4Intel ArcBattlefield 2042RTX 3090 TiRTX 4090RTX 4080GTA 6Elon MuskHDMI 2.1
GIVEAWAY: TEAMGROUP T-Force VULCAN Z SATA III SLC 2TB SSD, two up for grabs!
TV, Movies & Home Theatre
Blu-ray Movies
The year is 1959 and a school is asked to imagine the future in 50 years, the results of which are to be kept locked in a time capsule until the year 2009. Whilst many depict the future in terms of the space race and science fiction, one child fills an A4 page with a seemingly random assortment of numbers. When John Koestler (Nicholas Cage) decodes the numbers as the dates and human fatalities of every major disaster since that year, the race is on to try to stop the final three dates on the list, the last of which may hold devastating ramifications for the human race.

Since early successes with The Crow and Dark City, Australian director Alex Proyas has been one to watch. His output since then has ranged from indie (Garage Days) to big budget (I, Robot), but all of them have displayed his directorial trademarks, from mysterious protagonists to recurring visual cues. I do feel however, that Proyas has his best work ahead of him. I just hope he gets the opportunity to truly knock one out of the park.

Knowing is presented in the aspect ratio of 2.35:1, encoded in AVC MPEG-4 compression.

Filmed completely digital with the RED ONE camera, this transfer has never touched film and as such is completely devoid of any related pitfall, such as film artifacts. It does however exhibit a little too much in the way of an unrealistic look. I can't quite put my finger on it, but it doesn't really look like something I have seen before. It may well be an intentional effect that Proyas has gone for, or it could merely be a byproduct of the specific camera or filming process, but either way, I'm not sure it gels well, or is appropriate for the film.

But I digress; the technical aspects of the transfer are spot on. Sharpness is spot on, as is colour and contrast. The special effects sequences translate well to a smaller screen (I suspect they may have looked just a little bit hokey on a cinema screen). I didn't detect any annoying DNR or video based grain.

The main audio track is encoded in DTS HD Master Audio 5.1, at 16 bits.

Knowing features an incredibly aggressive audio mix that mixes down nicely for a home environment. The only real complaint I have is that I felt the vocals were ever so light on and could have used a few db extra volume. Surrounds are always active and throughout the whole film they are always throwing out some information, but rather than a distraction it helps to draw us into the world. Bass is incredibly low and omni-present, kicking into gear during action sequences.

I have nothing but praise for this mix; what an experience! - Demo worthy material indeed.

Coming to Blu-ray pretty light on, we have the following three features:

Alex Proyas and an unnamed associate give a highly enjoyable Audio Commentary. It's always nice to hear a fellow Aussie on a commentary and Proyas speaks very eloquently regarding the basis for the film. I haven't as yet listened to the entirety of the track, but I thoroughly enjoyed what I did listen to so I'll be sure to do that soon.

Next up are two featurettes; Visions of an Apocalypse which is a slightly alarmist discussion on potential end of the world scenarios (very uplifting stuff) and Knowing all: The making of a futuristic thriller which at little more than ten minutes long serves as a very brief overview of production. 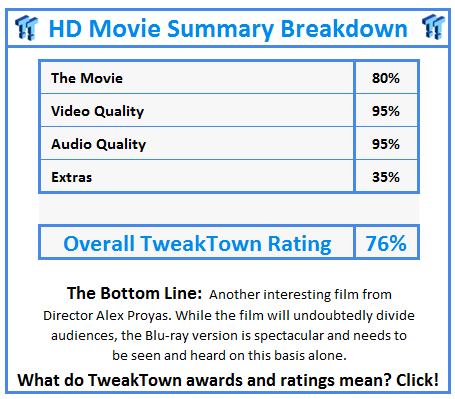