Carl Allen (Jim Carrey) is used to saying "no". He shuns his friends and co-workers, hides when people need him and takes no chances in life. When he is challenged to turn his "no" into "yes", his formerly safe life begins to morph into an exhilarating string of incidents which threatens to make him a better person, in addition to possibly finding love with cute Allison (Zooey Deschanel).

After years of playing the fool, Carrey seems to be more interested in comedy roles with a message, see also Bruce Almighty. The message in Yes Man is far more subtle, but one more can relate to. The film is based on the book of the same name by Danny Wallace. It's certainly one of the more enjoyable, yet physically restrained roles that Carrey has undertaken. Maybe he is getting more mature, or could it just be age?

Yes Man is presented in the aspect ratio of 1.78:1, encoded in VC-1 compression.

The colour palette of the film is pretty pleasing to the eye, full of bright primary colours, mixed with good on set lighting, all of which translates into an easy to encode transfer. Detail is pretty sharp across the board. Thankfully there were no real problems with film artifacts (it's pretty recent after all) or noise reduction. Occasionally there will be a little grain, which is fleeting between shots, but nothing to get too distracted by.

The main audio track is encoded in Dolby TrueHD 5.1, at 16 bits.

Look, this isn't a whizz bang audio track and will hardly be a demo worthy example to gather the friends with. As far as the content goes, however, the soundtrack is perfectly acceptable and on occasions impressive; especially during the numerous songs and incidental music littered throughout. There were no problems with audio sync, despite what I suspect would be a fair amount of redubbing on a soundstage.

The soundtrack composed by The Eels frontman Mark Everett is particularly impressive and gives the film a bit of a quirky edge. Said soundtrack is mixed nicely throughout.

Almost the entire collection of extra features takes on the form of the following featurettes:

Downtime on the Set with Jim Carrey at barely four minutes in length, finds Carrey goofing around the set. I wonder if he is actually this much fun in person? I suspect he is. Jim Carrey: Extreme Yes Man shows the stunts that Carrey did (and in one case did not perform himself), including the bungee jump. He's a good sport, too. Future Sounds: Munchausen by Proxy is concerned with the fake band from the film, which is followed up by Munchausen by Proxy Music Videos, which features some more action from the group. They should actually do something - they aren't that awful!

Gag Reel is pretty self-explanatory and well worth it, as are most Carrey gag reels. On Set with Danny Wallace: The Original Yes Man features the author of the book hamming it up on the set and shows some behind the scenes footage from his film cameo. He too sounds like a funny guy. Say Yes to Red Bull! finds Jim Carrey trying the hyped caffeine beverage for the first time and as you will see, he doesn't need it. I wonder how much Red Bull corporation paid for the product placement?

Yes Man: Party Central with Norman Stokes features New Zealand comedian Rhys Darby and is extremely brief at just two minutes. I hope this becomes his break out film - I would like to see a bit more of him. Finally, we have roughly seven minutes of Additional Scenes. It's all pretty short stuff and whilst not being bad per se, it would have been pretty superfluous in the film. 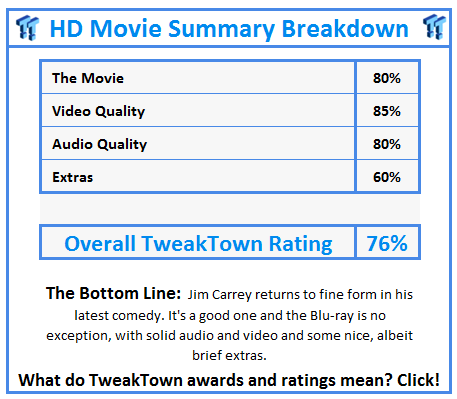