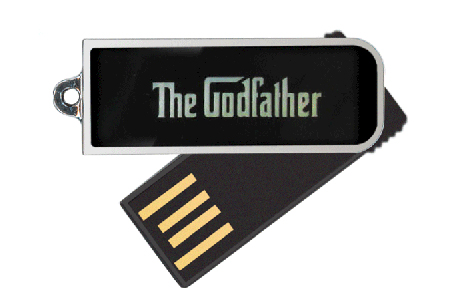 In saturated markets a company needs to do whatever they can to stand out from the crowd. Just the other day we looked at the Super Talent Luxio, a high capacity flash drive that packs a luxury design with hardware encryption options rarely seen on competing products. The Godfather Series, also by Super Talent, as the name implies is themed after Paramount Pictures iconic trilogy, The Godfather.

For some, a themed flash drive is just as sexy as a 64GB hardware encrypted drive. To each his own; I can't see my wife toting around a Godfather themed drive, maybe one with a picture of Chris Cornell. Themed items are an extension of ourselves and the things that we enjoy. To my knowledge The Godfather by Super Talent is the first movie themed flash drive and you have to hand it to their marketing to think outside of the box and come up with such a unique idea.

Today we are going to take a look at both Super Talent Godfather drives, the Rubber and Swivel. Both drives are currently available on the market and Newegg lists several capacities in stock at the time of writing.

The Super Talent Godfather Series is available in two distinct form factors, The Rubber and The Swivel. Both drives are available in 2, 4, 8 and 16GB capacities.

Newegg is currently sold out of the 2GB drives, but they show the 4GB drives in stock at 12.99; 16GB models go up to 34.99 USD. In the 4GB capacity range, Newegg lists 75 thumb drives, the lowest priced is another Super Talent, the ALUMI-4GB and it is priced at 8.99 USD, four Dollars less than the 4GB Super Talent Godfather drives. This is not too bad for a themed premium product.

To spice things up a bit and play off of the Godfather theme, Super Talent has included nineteen images with quotes from the movie trilogy. Godfather fans will find these quite interesting as a hand full appear to be movie posters from France, Japan and Italy.

For now the Godfather Series drives are only available in North America. I am sure this has to do more with licensing than Super Talent's desire to put Godfather products in the hands of global movie enthusiasts that can also work a PC. Hopefully things work out so The Godfather Series becomes a global product, but for now it is NA only.

Packaging for The Godfather Series drives is retail friendly and made to fit on shelf hooks.

The packaging for both Godfather Series drives is the same, as you might have picked up on from the first package shots. In the lower right a SKU distinguishes the two from one another.

Here we see the new Godfather Series drives in all their glory. Both the Rubber and the Swivel come with chains to help you keep track of the drives. The Rubber also comes with a rubber piece that you can store the cap on when the drive is in use.

I found it to be very difficult to get an image of the Swivel that showed the hologram effect that it casts in person.

Here we see the other side of the drives where the face is printed, also in very high quality.

Here we see the drives opened and with the caps removed.


To give the testing a little spice I chose to include benchmarks from some of my daily use thumb drives. The Corsair Flash Voyager, Corsair Readout and OCZ Rally 2 all offered great performance at their times of launch.

I was surprised to see that both drives do not share the same internals. My test machine reported both drives as having different controllers and neither was the same as the Pico Series we tested previously. All things considered, the Godfather Series is as fast and most likely faster than your current flash drive.

I don't think the Godfather Series drives are going to be for everyone, but there are many out there that feel such a love for the movie they must have one or both of the models.

When it comes to speed, the Godfather drives are right around what we expect to see for drives not designed for extreme transfer rates. Those drives tend to cost quite a bit more, sometimes double than competing products of the same capacity. Our sample 2GB drive comes in at less than 12.99, while the 16GB can be had for 34.99 USD, so you don't have to worry about breaking the bank to own a piece of Godfather history.

All things considered, the drives are quite nice for their market and the user will not have anything to complain about. The quality of the Godfather drives is high enough that you will want to show your buddies your new kit; hopefully they are fans of the movie too, so that they don't think you are obsessed. 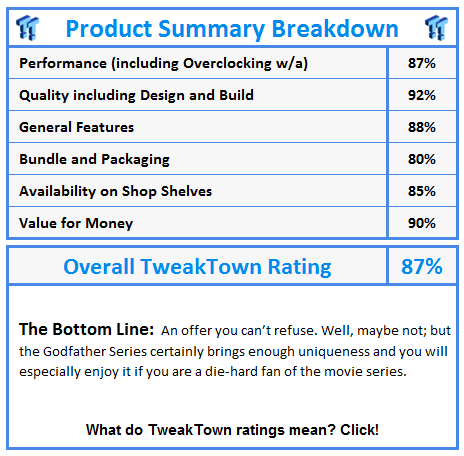