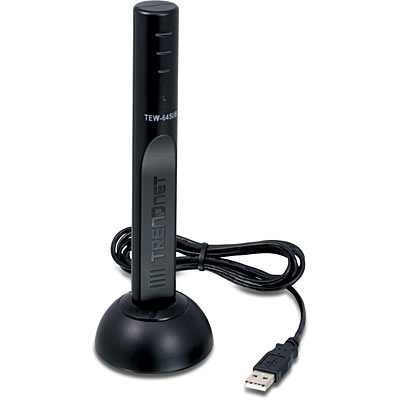 As more and more people design wireless home networks, the question becomes one of what to do with your older wireless and wired systems. This has become even more prominent with the increase in the number of inexpensive 300Mbps N specification routers and access points available. Newer laptops and netbooks do come with N wireless cards, but many devices that are less than a year old do not. Well, TRENDnet has an answer for you in the form of its TEW-645UB High Power Wireless N USB adapter.

The TEW-645UB boasts up to twice the range of traditional N USB adapters; with up to eight times the range of standard g adapters. Speed is also a feature of the TEW-645UB with maximum theoretical speeds of up to 300Mbps.

Looking at the packaging, we see the TEW-645UB has some great specifications listed. It covers all of the wireless specifications, including N 2.0. It also has a more powerful antenna over many other adapters in its class and price range. You can currently purchase the TEW-645UB from Newegg at 39.99 U.S. Dollars; a respectable price point for a Wireless N adapter. With 3dBi, it supports a very wide range of encryption including WPA2 (TKIP and AES) and there is driver support for both Windowx XP 32-bit and Vista x86 / x64. XP x64 is not listed as being supported out of the box, but may still work with the Vista driver.

Will the TEW-645UB be able to deliver on its promises? - It looks great on paper, but let's see if it can perform in the real world. 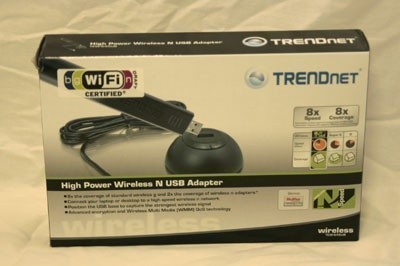 Opening the box will bring a little bit of a shock; the TEW-645UB is enormous! As manufacturers are moving towards smaller components, TRENDNet has opted to move in the opposite direction with the 645UB. 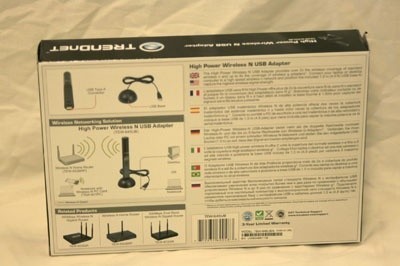 In the picture below you can see that when put next to two different wireless adapters, the TRENDNet TEW-645UB towers above them. 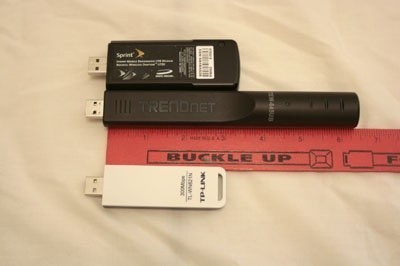 Apparently realizing that most people would not want a 6"+ tube sticking out of the back of their PC or the side of their laptop, TRENDNet has included a base for the TEW-645UB. On the surface they state it is to allow you to get the best signal, but I have a feeling it is also to keep your PC/laptop from looking a tad bit silly. 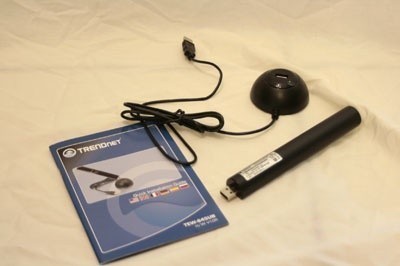 Also included is an actual paper manual (many manufacturers are moving away from this and are putting all documentation on to CDs or DVDs) plus the CD-ROM with drivers.

The TEW-645UB is, as I have already mentioned, a very large adapter. The majority of the space inside the 6.5 inch tube is antenna. This is where the TEW-645UB stands out over just about every other USB adapter. When you consider the size and strength of the antenna, it is no surprise that TRENDNet is claiming better range.

Unfortunately, while the length of the TEW-645UB helps with range, it actually limits portability. 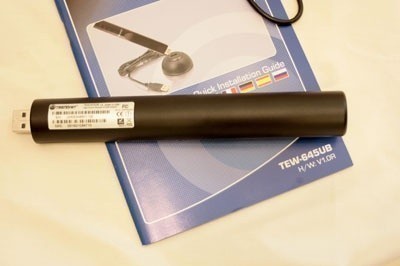 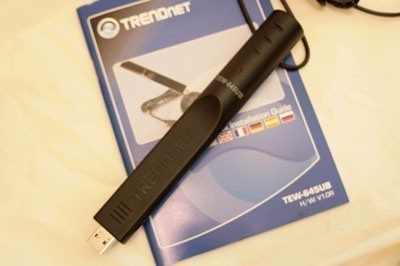 I attempted to use the TEW-645UB without the stand and found it to be very cumbersome. There was simply no way to use the TEW-645UB while supporting a laptop on your lap or a soft surface. With the TEW-645UB plugged into the back of my 17" ASUS G2S-X1, it would fall or get knocked out of the socket and to restore the connection, in many cases, I would have to reboot. I tried with the adapter in the side USB port with the same results. 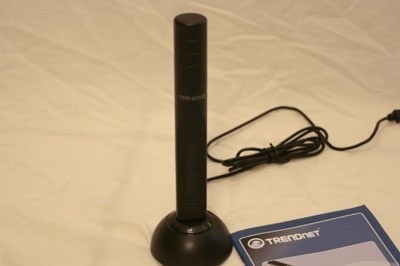 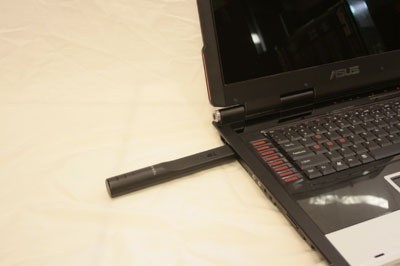 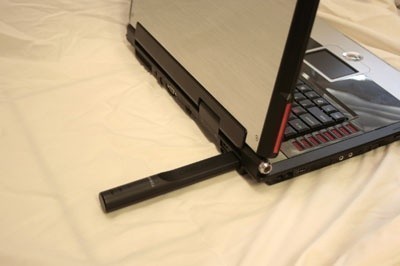 If you have the space on a hard surface (like a coffee table) you could use the TEW-645UB plugged directly in, but at that point you might just as well use the stand.

The setup for the TEW-645UB is extremely simple; plug the adapter into any available USB 2.0 port, drop the drivers CD-ROM in and you are off and running. 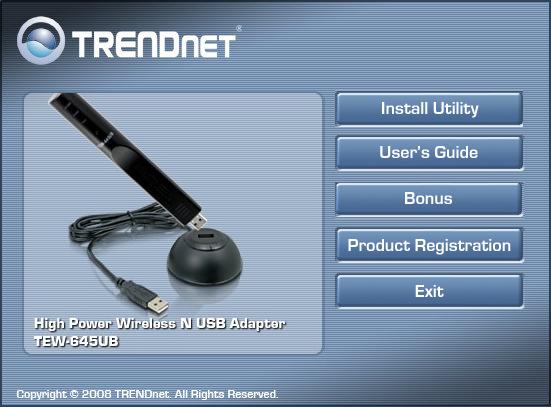 Included with the installation media is also a free subscription for McAfee Anti-Virus. This can be found by clicking the bonus button on the main installer screen. 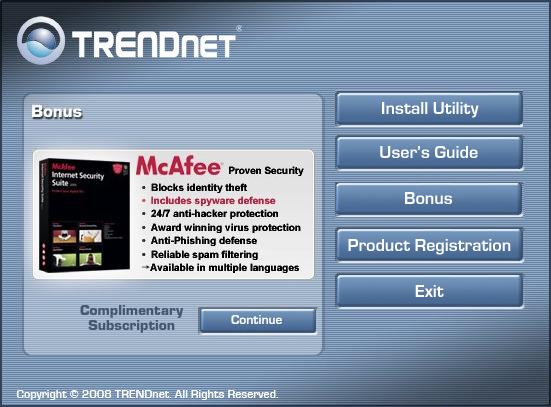 The software version that we played with was 3.0.0.16 with driver version 2.1.5.0. The user interface is very straight forward; you have tabs for link information, site survey and profiles.

On the Link Information tab you get all of the detailed information about your current wireless connection. This is everything from signal strength to the frequency that you are connecting over. 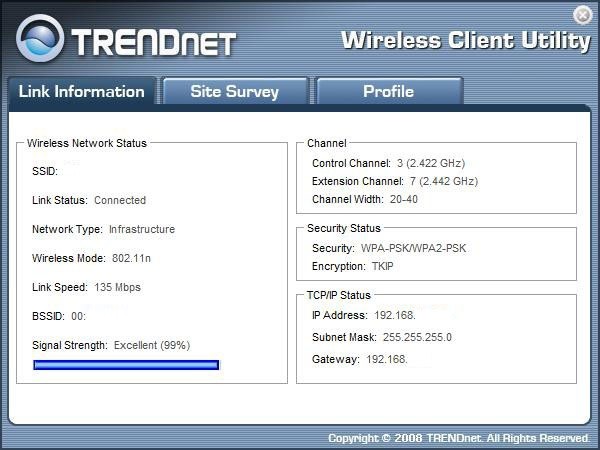 The next tab is the site survey; on this tab you will see information about all of the wireless connections within range. The signal strength, wireless mode, encryption type, channel and BSSID (usually the MAC of the Access Point).

You can choose a network and connect directly from this page by following the prompts. 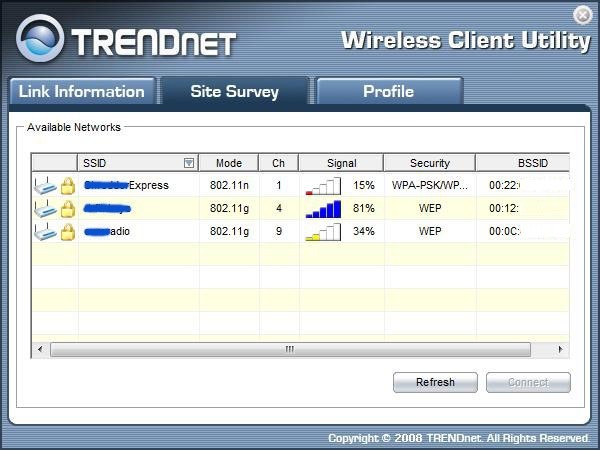 The last tab is the profile tab; here you can create profiles for commonly used networks. A profile, once created, will save you time and trouble inputting WEP or WPA(2) keys and pass phrases. 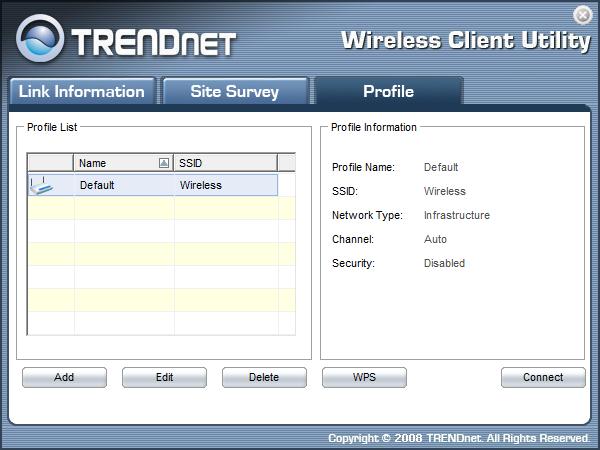 We compared the TRENDnet TEW-645UB adapter against the TP-Link TL-WN821N and the built-in Intel Pro Wireless (N) adapter on the ASUS G2S X1. All wireless tests were completed with WPA2 Personal (with the AES cipher, as it has been proven to provide better performance) and 802.11n + 802.11g wireless mode enabled on our D-Link DI-655 router. I chose to leave both n and g enabled as this is a more realistic simulation of a normal home wireless network. The router was placed in the exact same position as well as the notebook at its various testing locations for fair comparison.

I ran into some interesting connection issues when I first started testing the TEW-645UB.
In my test lab I have a mixture of wireless devices, the majority of which are now n, but I also have g and b adapters. This means that I have all three specs enabled in the DIR-655 router.

With all three specs enabled, the TRENDnet TEW-645UB would not connect any faster than 64Mbps. This caused some concern while I worked out what the cause of the problem was; I did not see this on any other n spec adapters that I have in the lab and regardless of the spec enabled, they all connect in the 130Mbps to 200Mbps range.

After tinkering with the settings in the DIR-655, I found my fastest connection was with n only. This setting allowed me to connect at speeds between 165MBps and 200Mbps. In the end I settled for running both n and g with connection speeds of around135Mbps. This is will not affect anyone with all n spec adapters, but will certainly come into play if you have a mix of technology.

Now for the fun part. To test the speed of the TRENDnet TEW-645UB I chose three common working points inside my house. One was in the lab within 10 feet of the DIR-655; the next was in the bedroom roughly 35 feet away and requiring the signal to travel through a wall containing the main house electrical panel and a "wet wall". The last was outside on the back porch, roughly 45 feet from the router. Both the second and third positions were out of the direct line of sight of the router. 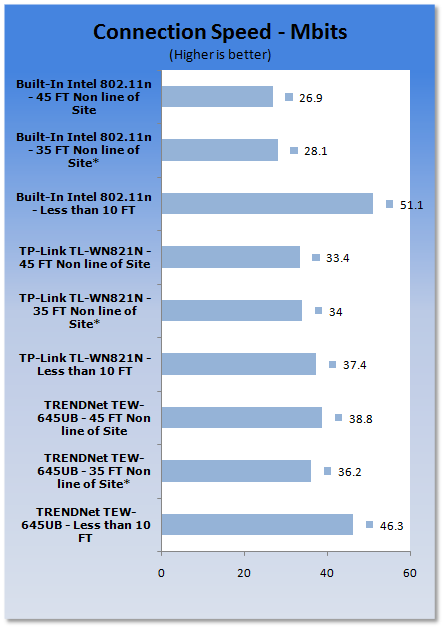 The results are very interesting to say the least. I was surprised to see the Intel adapter simply trounce everyone else in the 10 ft range, but it is running directly off of the PCI-E bus on the 965M chipset.

The TEW-645UB was still the best all around performer; this was evident as soon as I left the lab area. It was significantly better when pushing a signal through the pipes and electrical wires and also leads the pack at long distance, performing better at 45 feet than the TP-Link performed inside the 10 foot range.

Although I liked the performance of the TRENDnet TEW-645UB, I found its size to be awkward. You certainly would not use this adapter for your laptop. For a desktop it is great and does provide very good speed and coverage.

There were a few drawbacks to using the 645UB, though, if you have a mixture of slower/older wireless technology, the 645UB seems to place its own speed limit on itself. I found that with n, g, and b speeds enabled on the D-Link DIR-655, the TEW-645UB would not perform faster than 65Mbps. If I shut off b it would jump to 135Mbps and with only n enabled I was able to hit as high as 200Mbps.

The latter speed was not consistent; I am not sure if it is the adapter or the D-Link router that was the cause. This behavior was not present on the TP-Link or Intel adapters. They were both able to perform at high speed, even with b enabled.

With that all said and done, the TRENDnet TEW-645UB is still a good pick up at $39.99 USD from Newegg with its ability to maintain solid performance at distances other adapters struggle with. 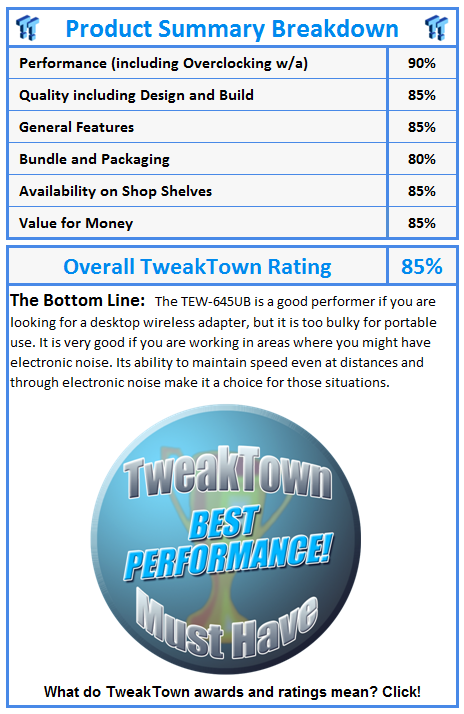