The market changed abruptly and shifted towards 2.5 and even 5G with the introduction of Wi-Fi 6. Now more than ever increased wired speeds are necessary as wireless is quickly becoming faster than ever.

Several vendors have released adapters, taking advantage of the performance and flexibility offered over USB 3.2. Back in August, we had our first look with the TRENDnet solution and today ASUSTOR was kind enough to send their solution over.

ASUSTOR is taking an interesting stance with its 2.5Gbe solution, marketing it as an upgrade for both your PC and several of their NAS appliances. In fact, most of their current lineup supports the 2.5Gbe upgrade over USB but for those interested models include: AS31/32/50/51/52/53/61/62/63/64/70 Series.

As for the hardware, the ASUSTOR solution shares a similar gum stick form factor to the TRENDnet solution and further shares the same hardware with the RTL8156 controller at its heart. The AS-U2.5G takes advantage of USB 3.2 Gen 1 and the USB-C connection. Compatibility includes Windows and MacOS platforms along with the listed ASUSTOR NAS platforms above. MSRP of the AS-U2.5G comes in at $45.99 with a one-year warranty. Packaging includes a brown box and sticker with model and regulatory information. Inside, you will find a QuickStart guide and the adapter. The adapter itself offers the RJ45 connection on one end and USB-C on the other. The bottom of the adapter gives model number and regulatory information as per usual.

Comparing hardware, the ASUSTOR, on the bottom above, has a slightly larger PCB and takes advantage of a standard taller aluminum heat sink whereas the TRENDnet unit has a smaller PCB and low profile heat sink that is pinned to the pcb. Functionally, hardware is identical between the two units.

I ran both adapters through testing with our new X570 motherboard, since our initial review of the TRENDnet was on Z390. A direct connection was used with a proper 10.0.0.10 network. Looking at 1Gbe performance, the ASUSTOR is the more stable adapter holding between 850 and 950Mbps while the TRENDnet has several drops to ~750Mbps. Moving over to 2.5Gbe the TRENDnet unit was more stable in our chart with a solid 2375Mbps start to finish. The ASUSTOR held strong for a good bit of time but did start to overheat and throttle performance towards the end.

Fit and finish of the ASUSTOR unit is great, the plastic certainly looks and feels better in the hand and going for the matte finish over the glossy used on the TRENDnet certainly helps as well. Performance between units was equal for the most part with each adapter having its moment whether it be in 1 or 2.5Gbe testing.

Testing for the AS-U2.5G offered a pretty solid 950Mbps experience for users on gigabit and 2375Mbps for 2.5Gbe. With the loss of performance at the end of testing, I did do some research and find that if you upgrade the driver to the latest it takes care of most of the throttling and performance issues for long term transfer rates.

As for pricing, the ASUSTOR solution is coming in hot, undercutting the TRENDnet by $10US MSRP at $45.99 and available at most online retailers. 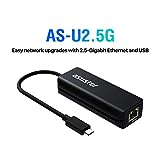 At its current price, the ASUSTOR AS-U2.5G is a fantastic option for upgrading your PC and NAS with 2.5Gbe.