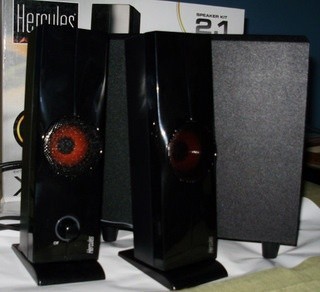 The very first product I took a look at from Hercules was the Game Theater XP sound card quite a few years ago. At the time this was the sound card to have and helped build a great reputation for the company. Some water has passed under the bridge since then and Hercules now has a brand new line-up of exciting products to show off.

One of these new products is a multi-purpose 2.1 speaker kit called the XPS 2.150. Finished in a very classy piano gloss black with orange speaker drivers, the XPS is out to make a strong aesthetic impression. Just below is a little extract of the company's PR statement about the new system.

"Based on the results of extensive consumer research, Hercules has created a system that reflects the evolving consumer tastes for design and finish as well as quality sound. Hercules developed the speakers to be competitively priced while at the same time delivering on style and audio quality. Components used to manufacture these speakers were hand-picked and of superior standard, in order to guarantee optimal sound reproduction and well-balanced bass, medium and treble sound emission - perfect for music and video games."

It's interesting to note the comment there about consumer research at the top. Perhaps Hercules are trying to create a feedback loop with their users to aid in product design, or new ideas; interesting none the less. 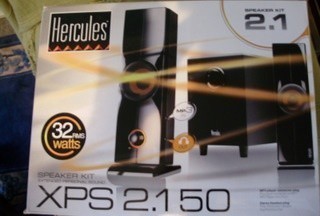 The XPS features compatibility with just about anything you might want to use, such as MP3 player, gaming console, TV, DVD or Blu-ray player. The system also features a headphone output and a line input on the side of the left speaker. Read on to see how they sound during testing. 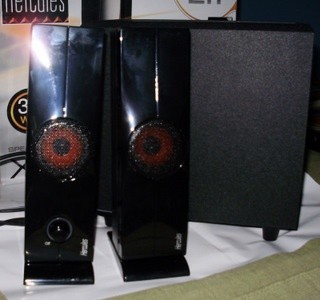 These are slender speakers with a quality black glossy finish, orange driver cones and an orange backlit volume knob. The feet are removable for flexible positioning, whether wall mounted or free standing. 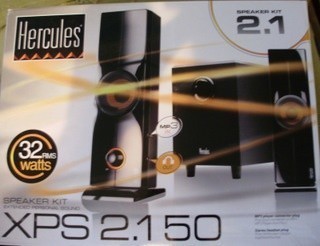 - Bass control and an on/off button (on the back of the subwoofer).

- Volume control, headphone jack and a line in connector, allowing users to connect an MP3 player directly to the right satellite speaker.

The first thing to note here is that the system is quite small and will not take up a lot of space, regardless of where it is put. With slim-line speaker designs and the option to wall mount the satellites, I cannot foresee any problems in setting these up. The subwoofer unit is also quite small in size and will not pose any problems when it comes to finding a home for it.

When it comes to power, the satellites each get 8w RMS and the subwoofer gets 16w RMS. This might not sound like a lot of power, but other factors like speaker sensitivity also come into play. Total harmonic distortion or THD as I mentioned in my Xonar Essence review is the signal relative to the amount of interference it experiences at a given frequency. For this system it's given at 10%, which is not fantastic. However, this is not the end of the world as there are still many other important factors involved in how they sound.

Frequency response is given at 40Hz to 20,000, which is optimistic at both ends of the scale; achieving 20K at the top end without a tweeter is not easy and asking a 5" woofer to go down to 40Hz comfortably is very difficult.

Just briefly as a side note, but an important one; when dealing with systems like this which are aimed very much at the lower end of the market, the primary focus of analyzing specifications of a product becomes, well, less primarily of a concern. Although still rightfully necessary in the reviewing process, the emphasis falls to 'Is this good value for money or not?'. 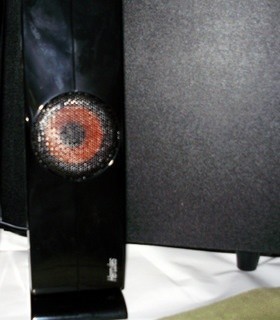 When it comes to controlling the system, on the rear of the subwoofer you will find controls for itself and the main power on/off switch for the system. On the left satellite there is a volume control for the two main speakers and on the side of the speaker there is a very handy headphone jack to save from reaching behind the PC at all hours. Also there is a line input for any of the various MP3 players currently on the market. 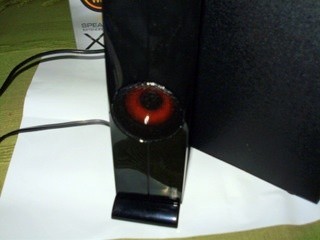 What we're looking at here is a 2.1 system with not a whole lot of headroom in the amp stakes. It also lacks dedicated tweeters, which can be difficult to overcome in terms of extending the response right up through the higher frequencies with competence. However, having had such positive experiences with Hercules products thus far, I'm confident this system is right on when it comes to value for money and it might even throw up a surprise with sound quality. 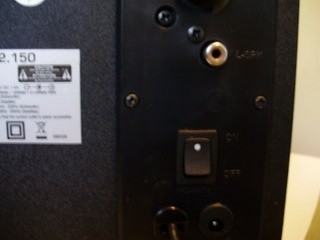 The XPS 2.150 come in quite a small but very nicely designed box which features a nice image of the strikingly designed satellites and their piano black finish; these further complimented by the orange speaker cones and more orange around the volume control in LED form.

Unpacking was quite a quick and easy job with some of the cables already hardwired into the units to make setup that much easier. Placing the two main satellites is painless due to their small footprint and also the second option of being able to wall mount the units. 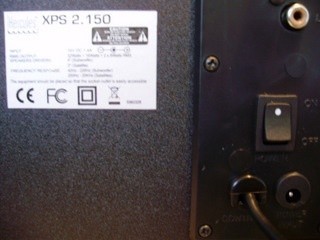 Once the two main speakers are placed out on the desktop, the next task is to place the woofer unit down on the ground out of the way; in a corner if possible. Not that I would usually recommend such a placement, but due to the very small size of the woofer unit used here, it's vital to boost the bass in any way possible.

Once this is taken care of, the next job is to connect the stereo mini-jack to a source. This might be an XBOX, PC, MP3 player, TV, Blu-ray or DVD player, etc. but make sure you have a signal before trying to get the system going. All that remains now is to connect the wall adapter and power the system up for the first time. At this point it will be necessary to adjust the woofer to dial it in with the room it's in.

So, how do they sound? 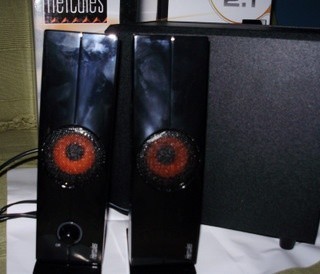 Subwoofer: I found the results when listening to music through the XPS 2.150 to be mixed, with a lot of low end not managing to rumble like it should and also lacking in a lot of bass definition all together. However, that being said, it's a tiny little box and actually does have presence for its stature. It does give the impression of there being bass in the room; it's just that due to its inherent limitations it cannot transcend the 2D realm of sound and comes off a little thin.

Satellites: Appearances aside, how do these funky satellites sound? Well, again, like the woofer above they are hamstrung by a very small driver unit and a lightweight magnet on the back of the driver. The resulting sound is mixed depending on the application; there's some smooth mid-range tones coming through and an impressively dark tone for such small speakers. Imaging was actually quite good as well, placing clear and comfortably audible vocals smack bang in the center of the screen.

Gaming: No matter what gaming solution you might have, these speakers will be able to offer a nice jump up from inbuilt TV speakers and will provide an immersing experience at moderate to mid volume levels. Don't expect any noise complaints about these, but that's not a bad thing, is it?

There is also the lack of surround due to the system being a 2.1 solution, which will not be an ideal situation for gamers. But on the other hand, they are very easy to pack up and move around.

Movies: Due to their strength with vocal tones and imaging, these speakers position themselves as a strong solution for the movie buff who's always moving around; no pun intended.

The bass was not a strong point again here, but by keeping the woofer at moderate volume levels this can be aided a little. Overall, the experience when watching movies on the XPS 2.150 is definitely a cut above any in-built TV speakers I have heard and should make the experience that much more immersing.

Music: A difficult area as you have heard me say many times, this due to the complex mix of tones and transients found in most modern recordings. However, the XPS 2.150 delivers musical presence into a small to medium room with most material played back to an acceptable degree. But overloading the woofer dial is easy and must be avoided to keep the low in check.

Overall, there are certainly worse ways to listen to your music, just don't ask too much of the system.

It seems Hercules is aiming itself towards the budget end of the market these days, which might prove to be a cunning move with all the financial troubles facing the world.

However, it's unfortunate that so many systems are given fluffy woofers instead of real genuine sub woofers, but it is the most expensive part of a system and must be factored in against what the company hopes the RRP will be in the end.

Notwithstanding, performance genuinely turned out to be better than I could have expected, which is a credit to the design of the system and the components used in its construction.

Games and movies would be the most comfortable for this system, but it doesn't mind a little music at moderate volume levels. I encountered zero issues installing the system and also with its day to day operation; another credit to build and design.

So, the inevitable question poses itself once more; is the XPS 2.150 worth $69 AU? The answer is yes! For the moderate to light user it certainly is and is even considered by myself to be really good value for that $69 AU. 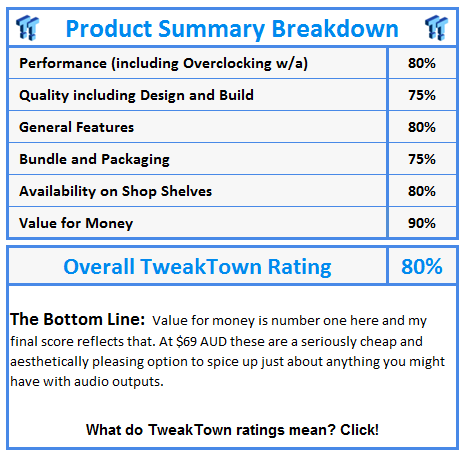