The Z690 Waterforce will cost an arm and a leg, but it offers the best hardware platform available on Intel Z690.

The Z690 AORUS Xtreme, at the time of writing, was one of the best boards to hit our lab this generation. With our Z690 review coverage ending soon, we were curious if the Waterforce variant would offer anything more for the added cost. Like ROG, with its Maximus Extreme and Glacial variant, the AORUS Xtreme WF is an identical hardware platform to its non-water-cooled model. This includes expansion and connectivity, which we will transition to below.

As per most Z690 platforms, we start with CPU support, which right now includes 12th Gen CPUs. The Xtreme is a DDR5 platform supporting 4800-6400MHz modules with a maximum capacity of 128GB over the four slots. The expansion includes three PCIe x16 slots; the top two are Gen5 and operate in x16 or x8 x8 mode. The bottom slot pulls from the chipset at PCIe 3.0.

Storage includes four NVMe slots; the top slot under the large heat sink is Gen4 capable from the CPU, and the following three are from the chipset at Gen 4.0. This pulls us into rear I/O expansion, where you will get Wi-Fi 6e alongside 2.5Gbe from Intel and Marvell 10Gbe. USB ports are plentiful as well, with ten ports, all USB 3.2.

The Z690 AORUS Xtreme Waterforce carries an MSRP of $1899.99 with a three-year warranty. 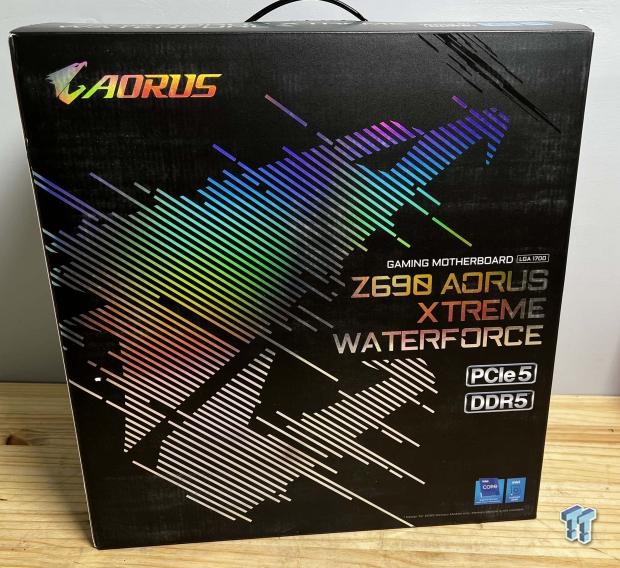 The packaging features a large AORUS logo with mentions of PCIe Gen5 and DDR5 to the right. 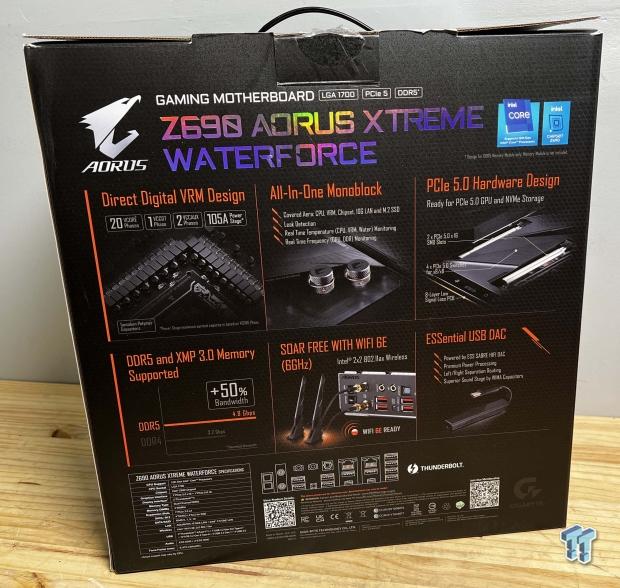 The rear of the packaging includes features to the right and specs right below, including a rear I/O layout. 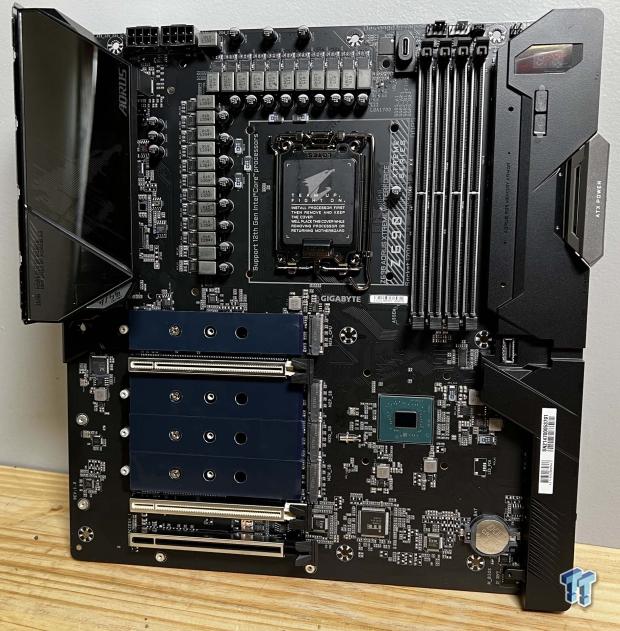 The Xtreme Waterforce comes without any heat sinks attached. We have three PCIe x16 slots; all shielded, heat piped VRM sinks, and a large heat sink for the main NVMe slot. Memory and VRM are contained with RGB covers, and the power and reset buttons are tucked to the far right. 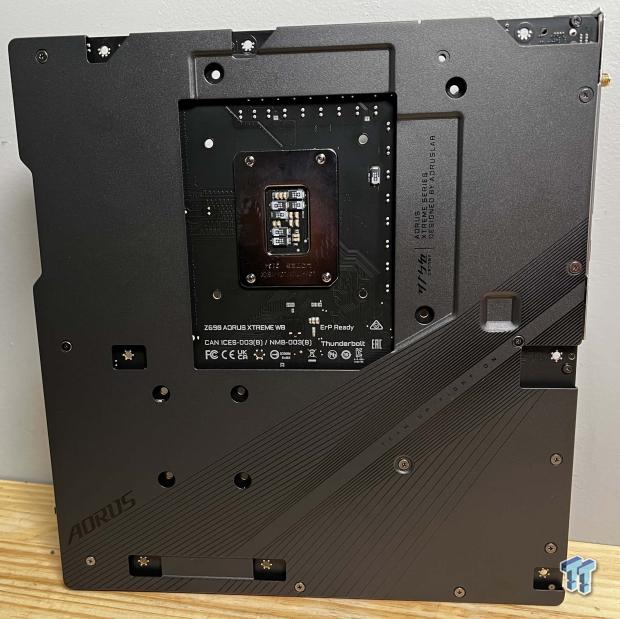 The back of the board has additional armor to add rigidity to the board. 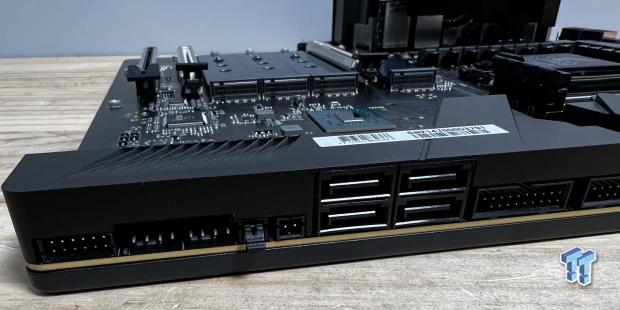 All ports are placed along the right side of the board tucked into the armor; this includes USB 2.0 headers, front panel connections, and SATA, as seen in the image above.

USB 3.2 and several additional ports land just before the 24-pin.

Last, we have a set of fan connections to the right of the 24-pin. 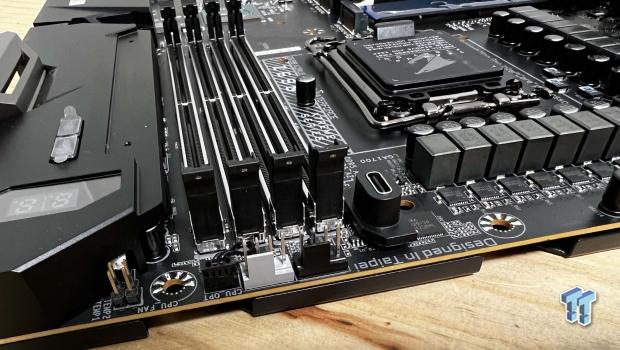 Across the top, we run into fan headers and the USB connection for the water block. 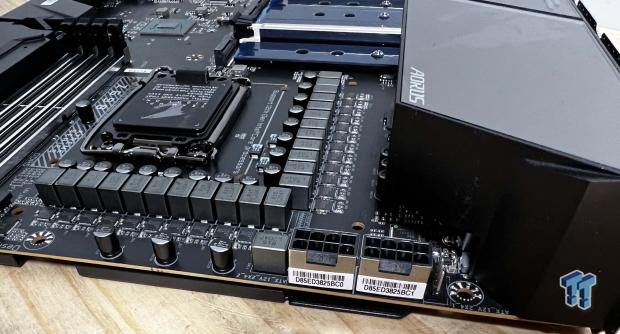 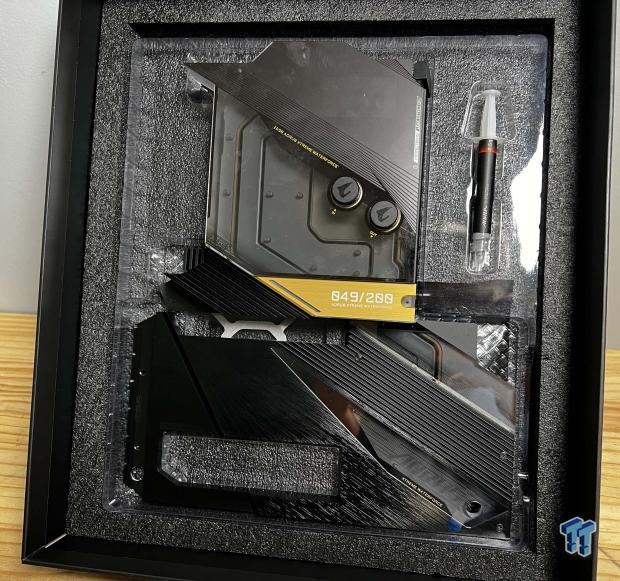 The water block is housed in its own packaging, complete with hardware for mounting and thermal paste. 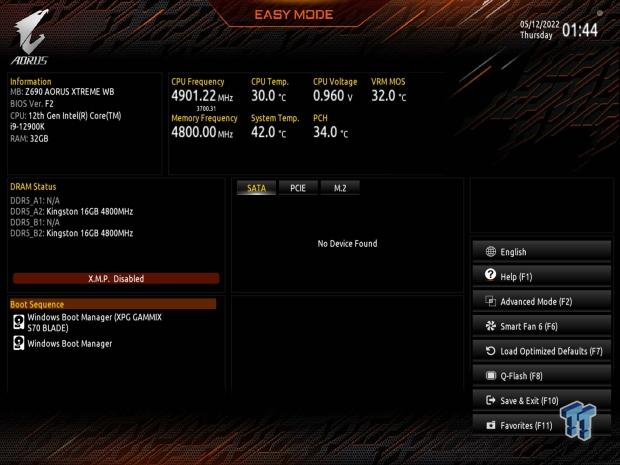 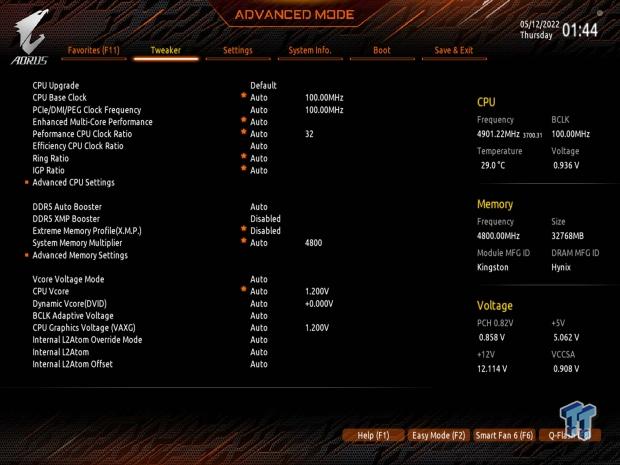 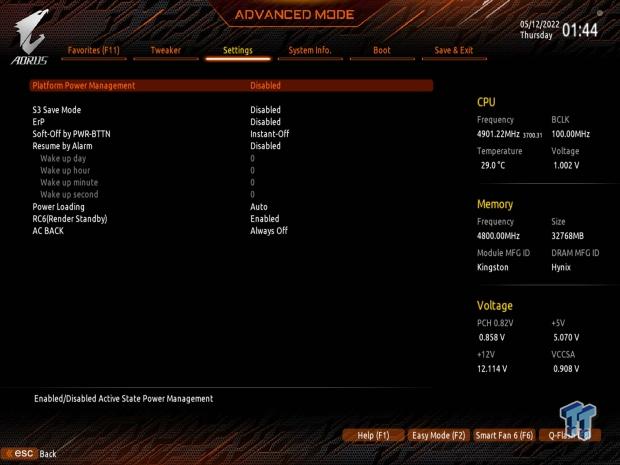 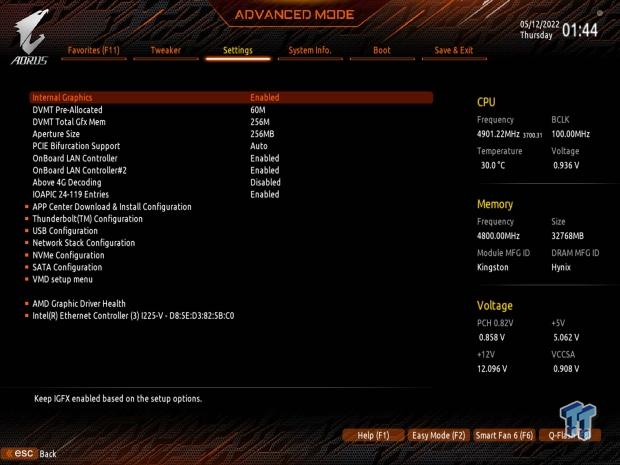 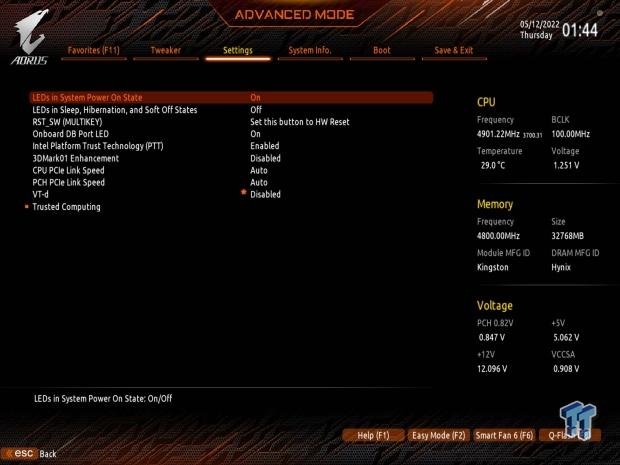 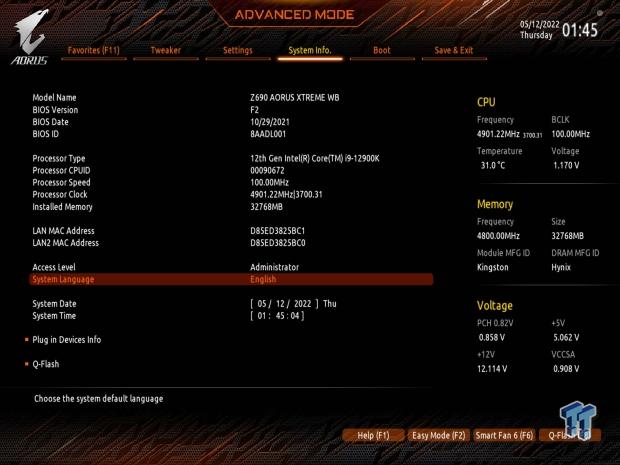 BIOS layout starts with the easy mode. You will get all the CPU and RAM information along the top, including frequency and temperature. The boot sequence shows installed drives and fan controls to the right.

Advanced mode is where you will find tweaking tools for CPU and memory, including voltages. AORUS has additional options in the IO Ports menu; these include the ability to disable IGP and configure LAN controls, Thunderbolt, and storage. 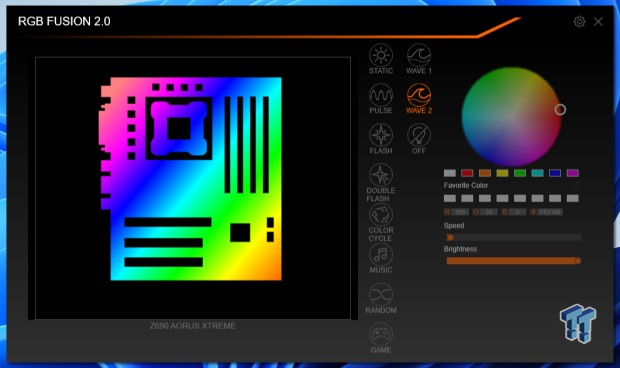 RGB Fusion allows you to control all the functionality of the board, including the individual ports. 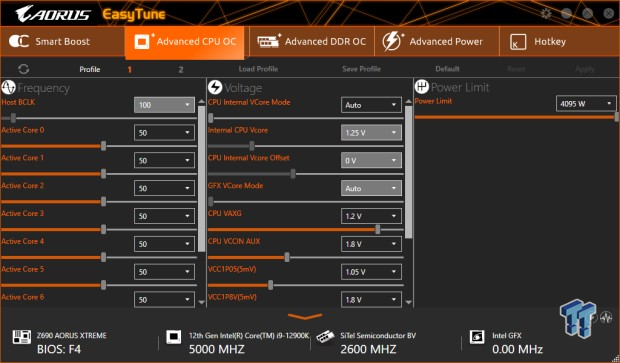 The easy tune allows you to perform on-the-fly configuration of the Xtreme while in Windows. 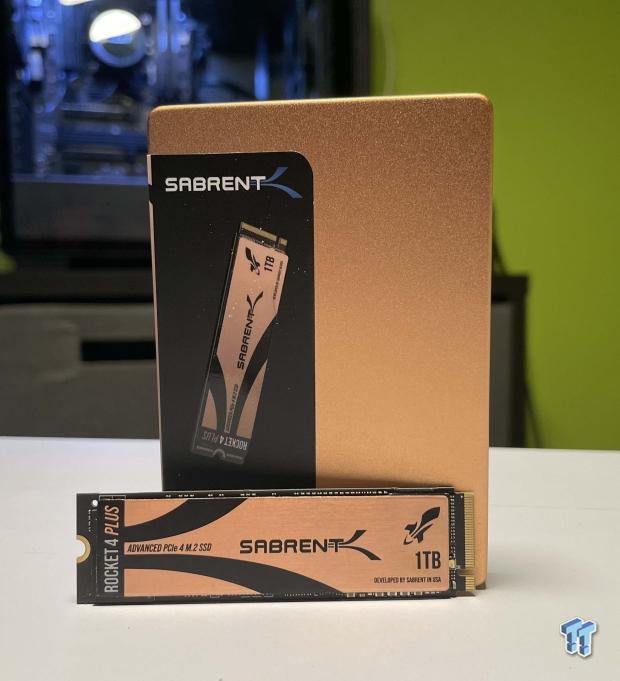 Sabrent supports our storage testing with the Rocket 4 Plus. 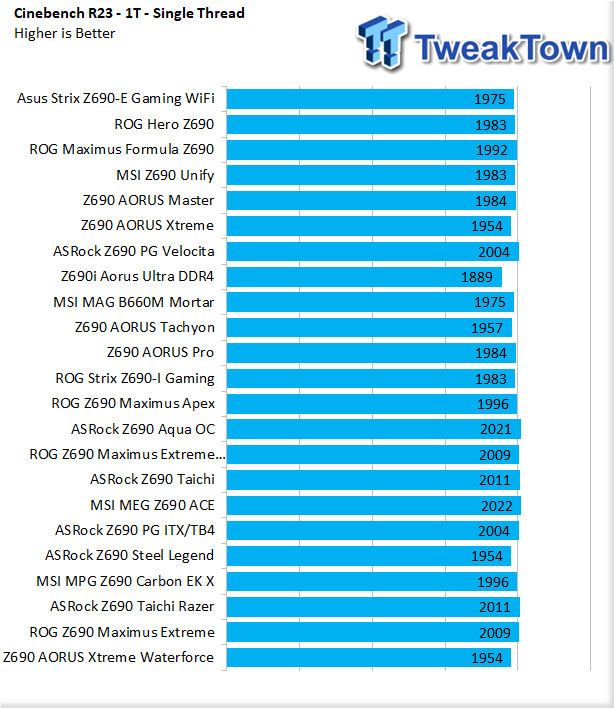 This being our last board, the Waterforce landed a score of 1954 in single thread. 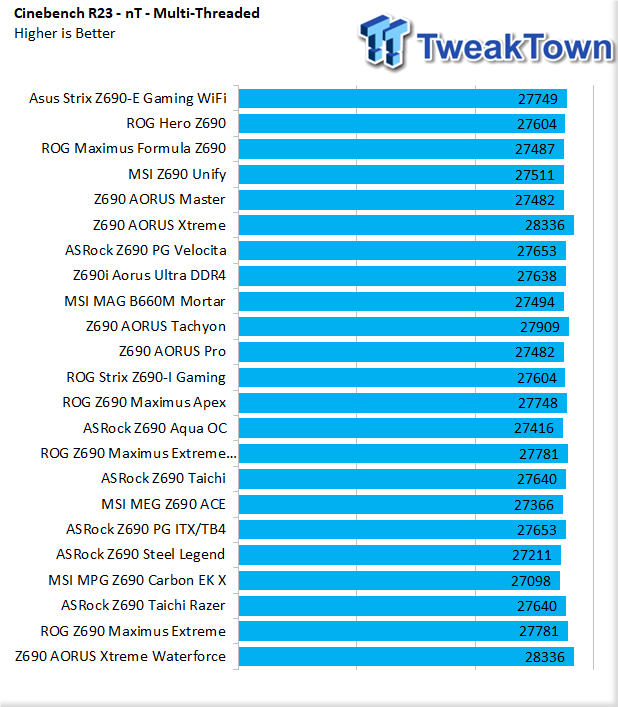 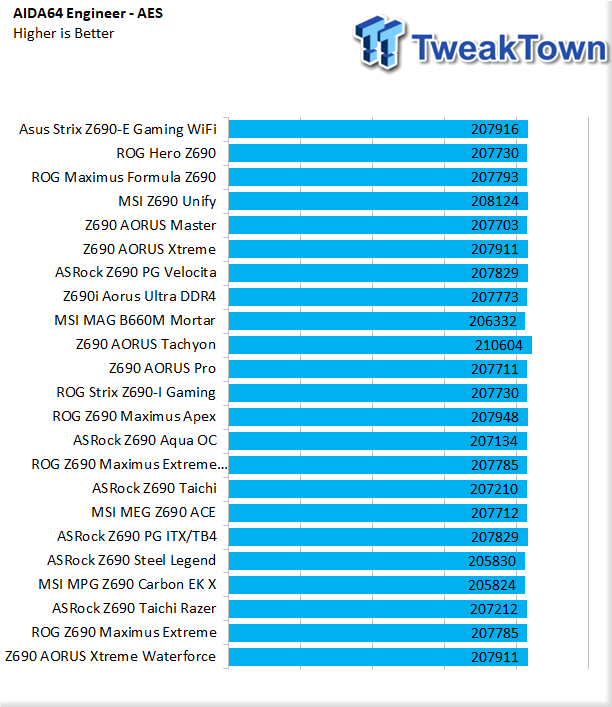 AES offers the highest performance yet next to the Tachyon at 207911. 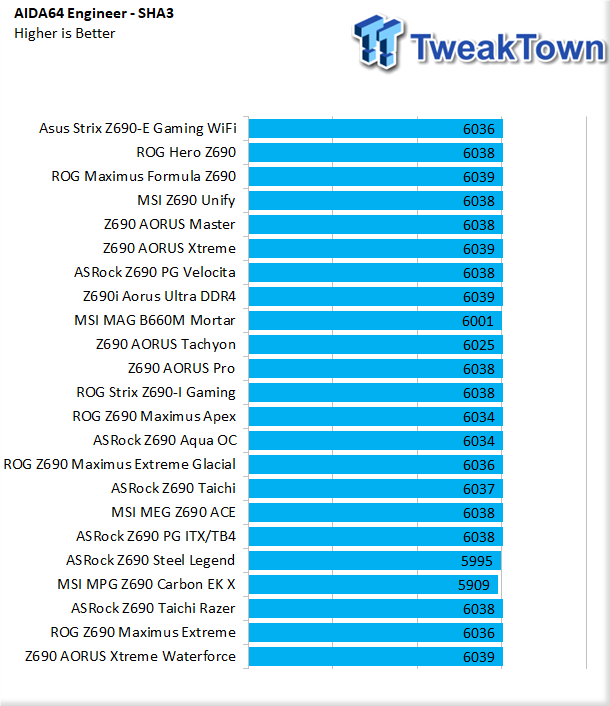 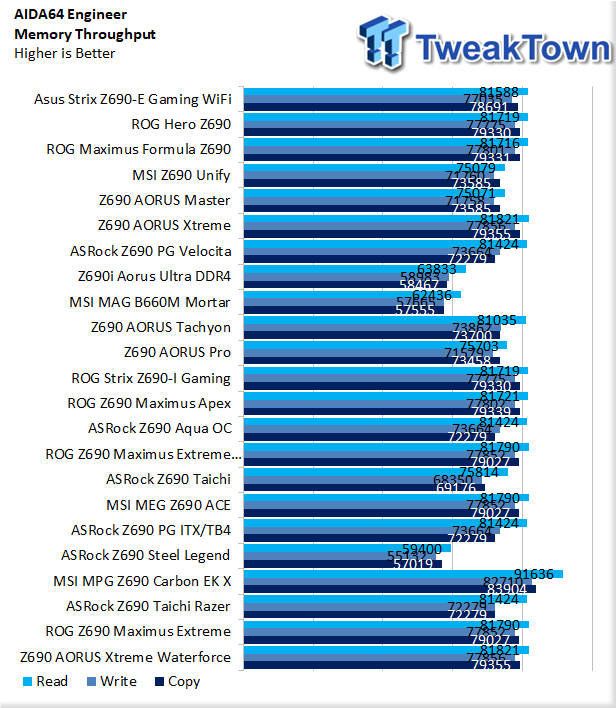 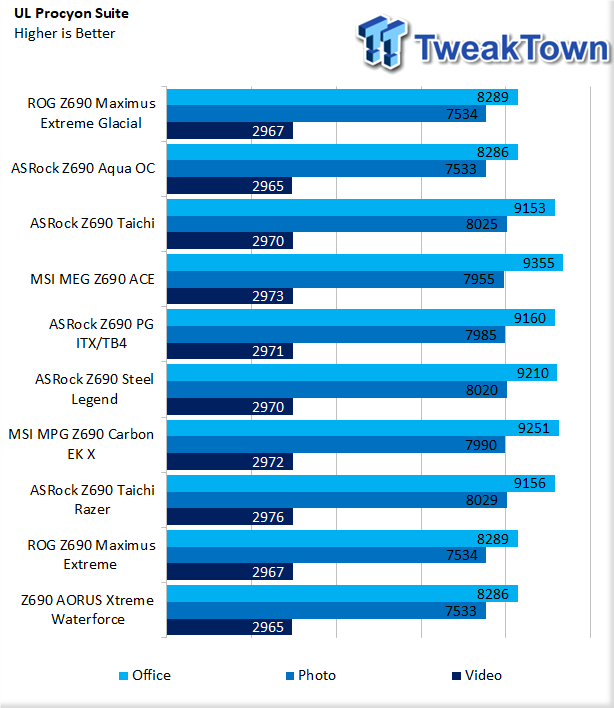 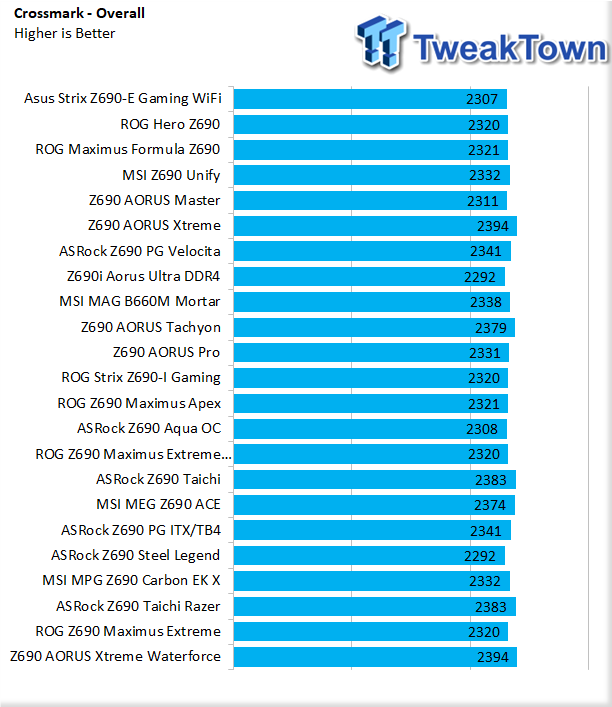 The Xtreme gave us our highest CrossMark score back when we tested it. A few months later, the Waterforce shows similar prowess with a nearly identical score of 2394. 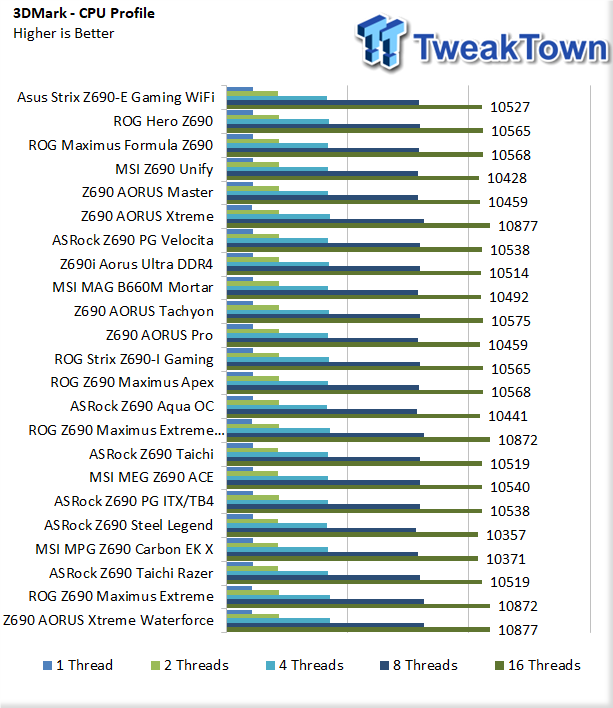 CPU Profile showed a slight edge to the WF at 16-threads, scoring 10877; eight threads give us 8160 while things start to even off at four threads. 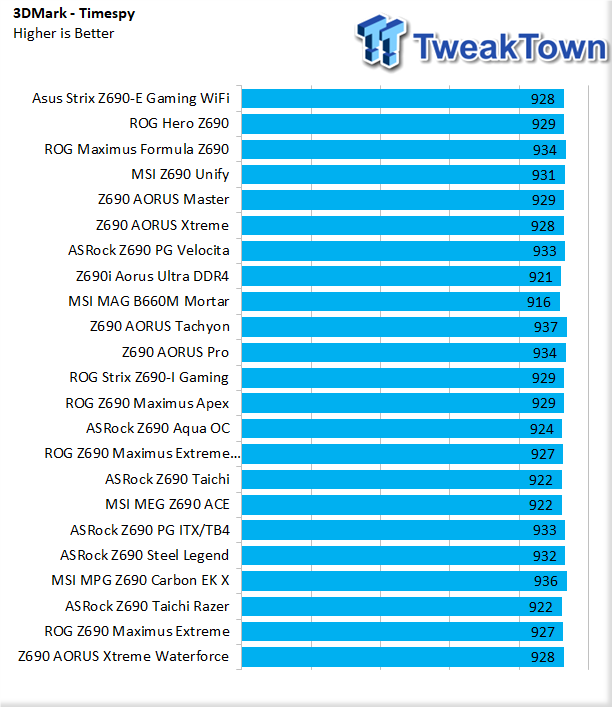 Timespy showed a score of 928. 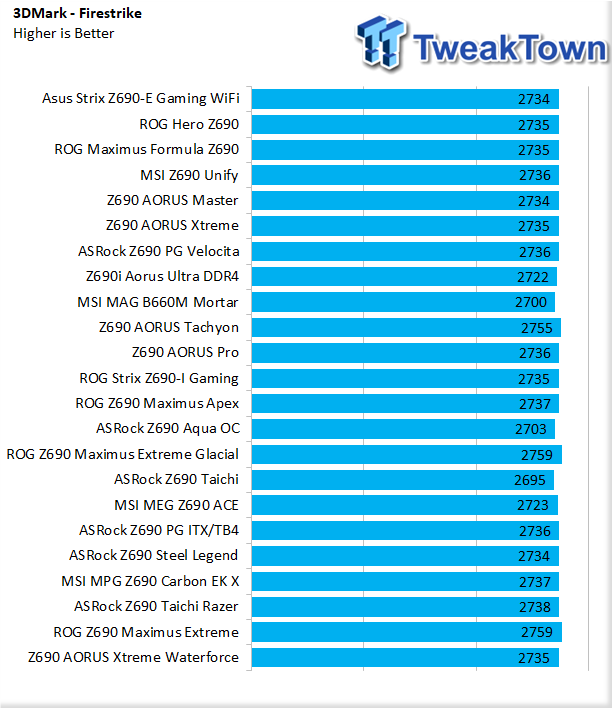 Firestrike pushed higher with a score of 2735. 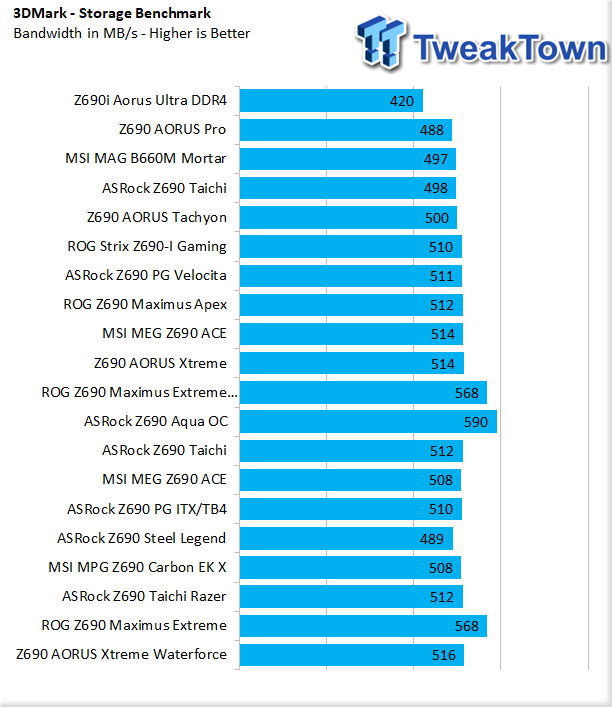 Storage for the Waterforce gave us 516 MB/s, which seems to be around the average for Z690 platforms.

When it comes to these factory water block motherboards, cost alone almost puts them in a separate market. These boards require someone fully committed and likely someone looking to build a machine that will run them a few years at a minimum.

This leans into the hardware on the Waterforce quite well, and it's relatively futureproofed with 10Gbe, WiFi6e, and Thunderbolt 4. It also maintains dual-slot PCIe 5 support and DDR5, giving any would-be builder at least a few years before the market makes this board mainstream.

In testing, this board was at the top of every chart, alongside its non-blocked variant. R23 multi-thread gave us 28336 followed by 2394 in CrossMark. CPU Profile gave us a top score of 10887, another top score for the Xtreme.

Software for this board is ample and includes both controls for the board's RGB functionality and CPU and memory tuning with EZTune. The BIOS offers all the functionality one would expect for a high-end platform. Overclocking tools are some of the better available, complete with preset tuning for different types of DDR5, even a Hynix tune that allowed us to push our kit to 6600MHz.

Pricing is certainly dicey for the Waterforce, as the non-blocked variant holds an $899 MSRP, and this full blocked setup will cost you $1899.99, with some retailers offering it at a discount as of this writing. That said, the hardware involved makes it one of the best options available, and with rumored 13th Gen support coming to the 600 series chipset, it's worth looking at even now.

The Z690 Waterforce will cost an arm and a leg, but it offers the best hardware platform available on Intel Z690.