With the Ace taking the enthusiast slot in MSI's Z690 MAG lineup, variations of the Z690 Carbon and Z690 Edge fill out of the MPG portfolio. At the top end of this range of motherboards is the Carbon EK X, a board that is functionally identical to the Carbon Wi-Fi but with extra sauce added from EK Waterblocks.

For the hardware platform, we have all the typical, with Z690 chipset, Socket LGA1700, and four DDR5 memory slots. As per usual, this allows 128GB of memory to be installed using 32GB sticks, with speeds of 4800 supported at the base and 6600MHz at the top end.

Three full-length PCIe slots are included. The top two are Gen5 compatible and operate in single x16 or x8x8 if using both. The third slot is set up from the chipset and uses PCIe Gen3. This platform also has five M.2 slots, one pulling off the CPU and four coming from the chipset at Gen4. Additional storage is available from the six SATA ports.

Networking is 2.5Gbe using the i225 chipset paired with the AX211 chipset for WiFi6e. Rear panel connectivity includes USB 2.0 and USB 3.2 connectivity alongside 20Gbps USB-C and Realtek ALC4080 for audio. 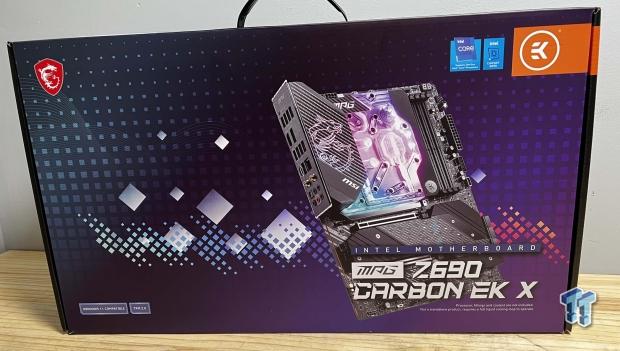 The packaging for the EK X is a little bigger than normal to make room for the added monoblock. On the front, we have mentioned chipset and CPU support. 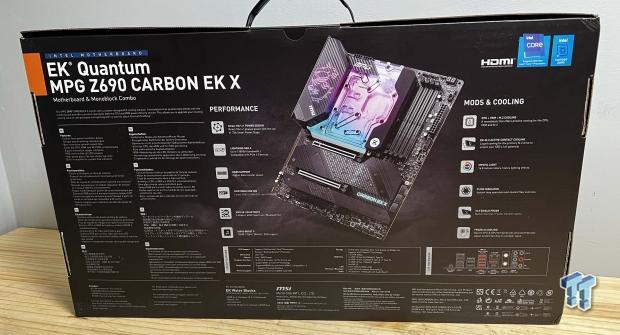 Specifications are listed below, with a rear I/O diagram to the right on the back. 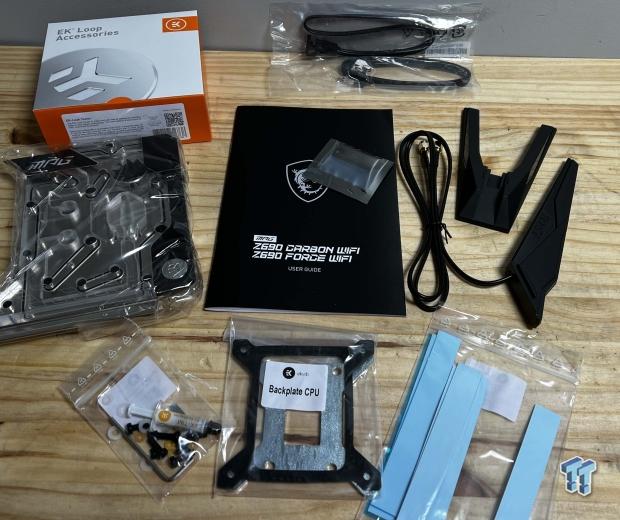 The MPG includes all the hardware and fasteners for installing the water block. We also have the standard WIFI antenna, SATA cables, and reading materials. 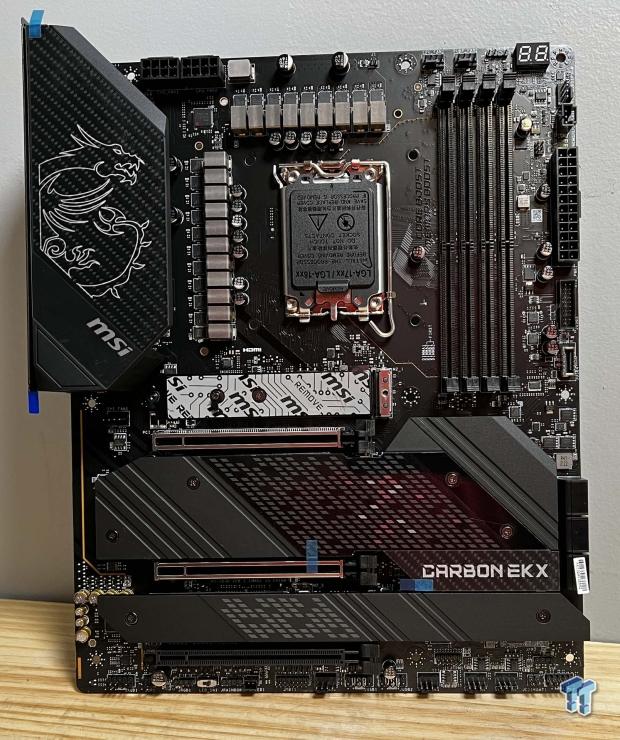 The Carbon EK X is an ATX board black PCB and heat sinks. It does have RGB on the rear I/O plate and chipset heat sink. With this being a monoblock board, we have the VRM exposed, a 20-phase design. 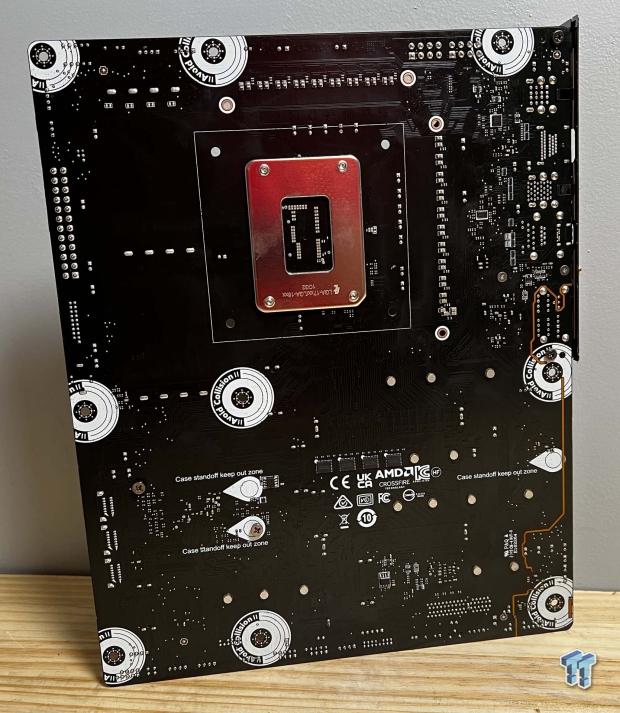 We don't have any armor and no real ICs on the back of the board. MSI does mark out the mounting holes and includes standoff keep-out zones.

Rear I/O includes both HDMI and DP just below a set of USB 2.0. We then run into a host of USB 3.2 Gen1 ports, followed by the USB-C. 2.5Gbe lives just off to the side while Wi-Fi and Audio land at the bottom of the board. 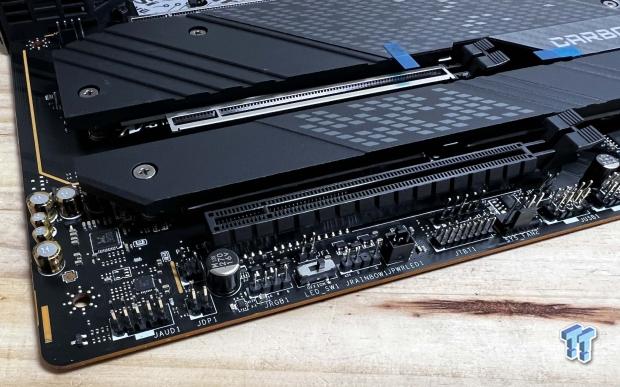 The board layout includes front panel audio followed by RGB. Further down, we also have USB 2.0 and fan headers. 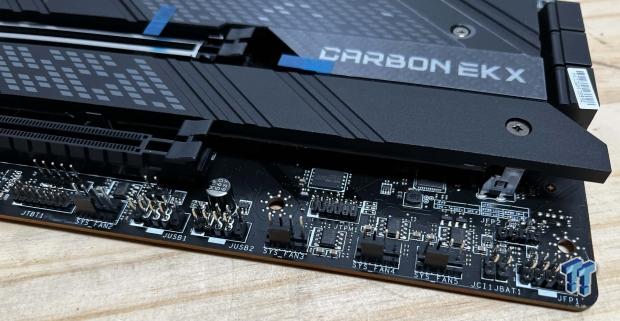 Further down, we have more fan headers and front panel connections. 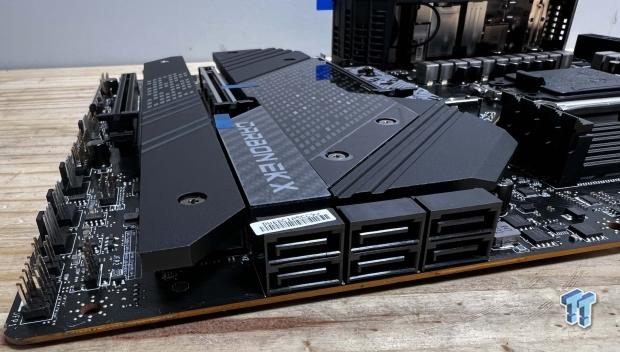 Around the corner, we have the SATA ports. 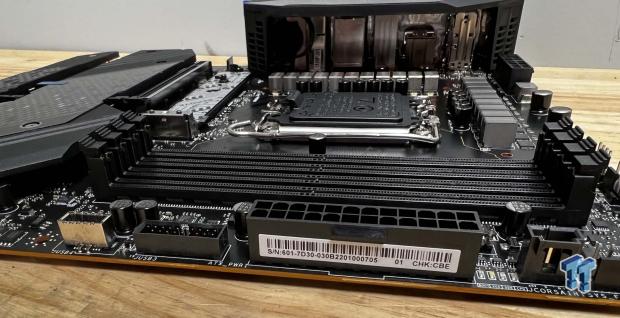 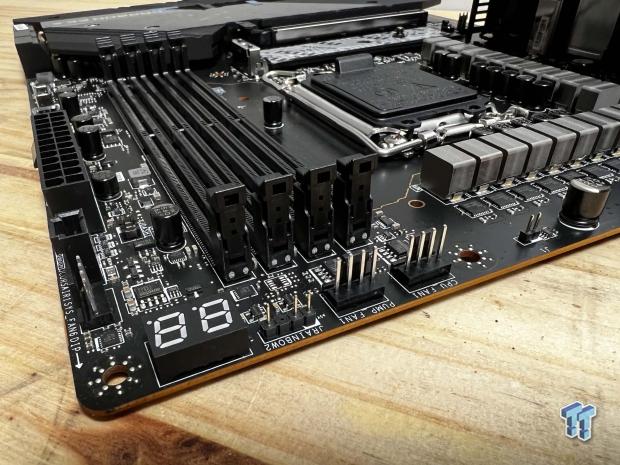 Across the top, we have the debug LED, more RGB, and fan connections. 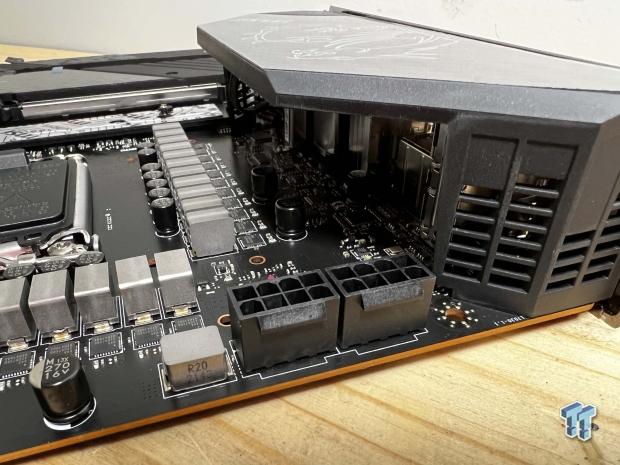 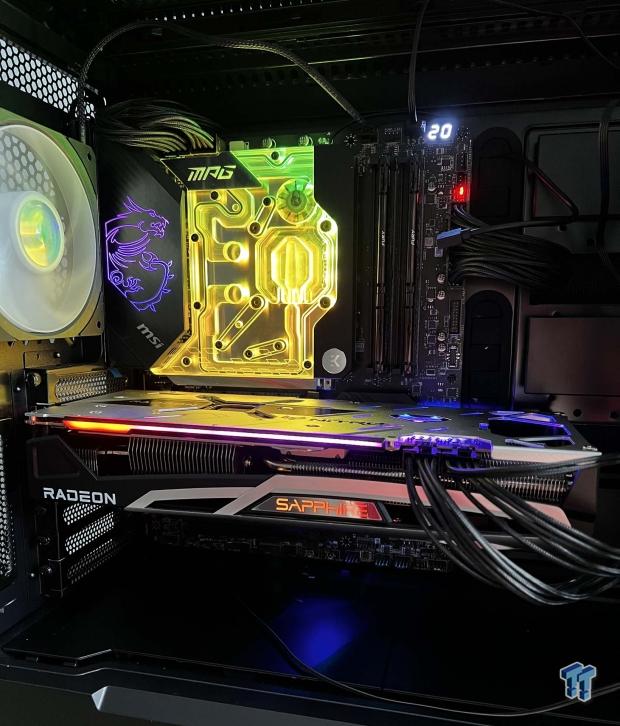 With the board installed, we do have the chance to check out the RGB on the board. This includes RGB included in the monoblock. 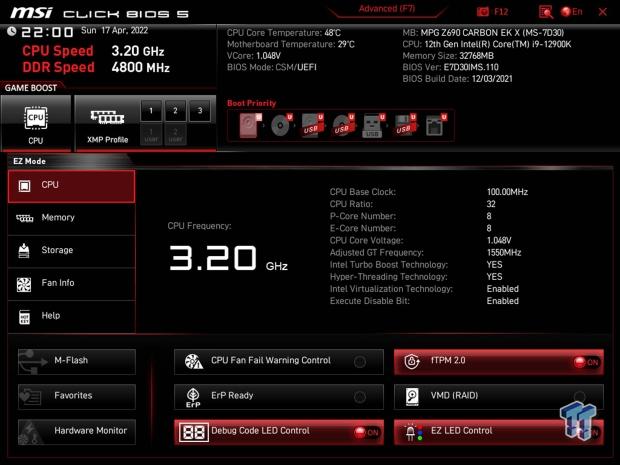 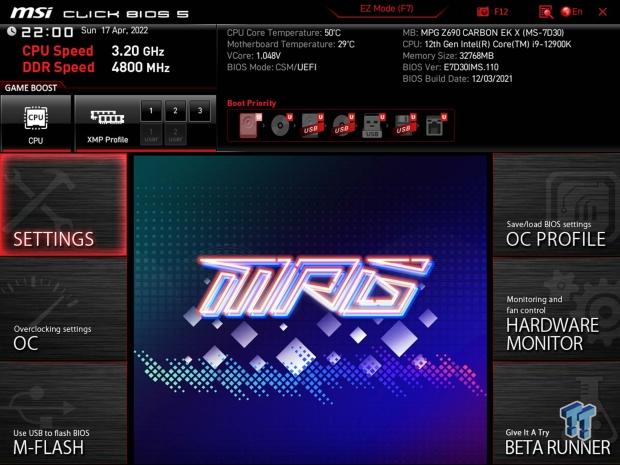 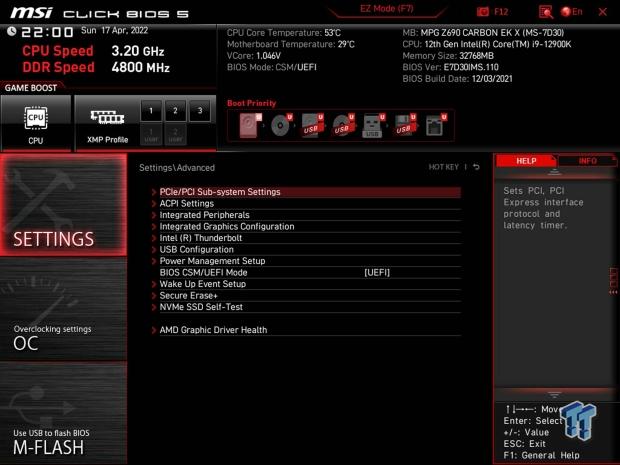 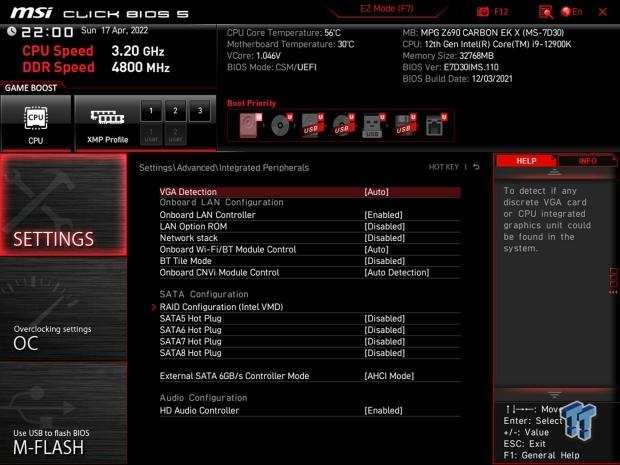 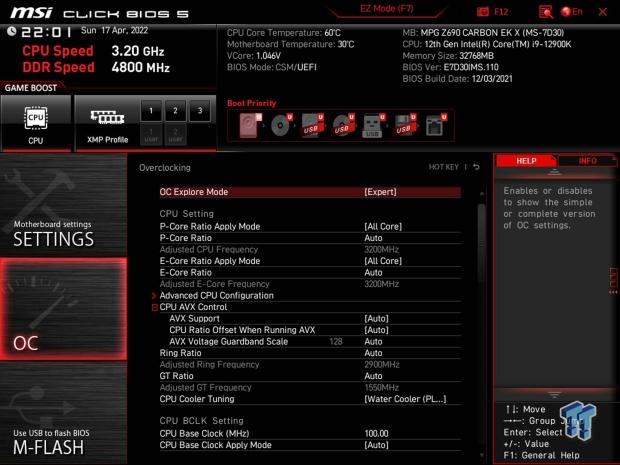 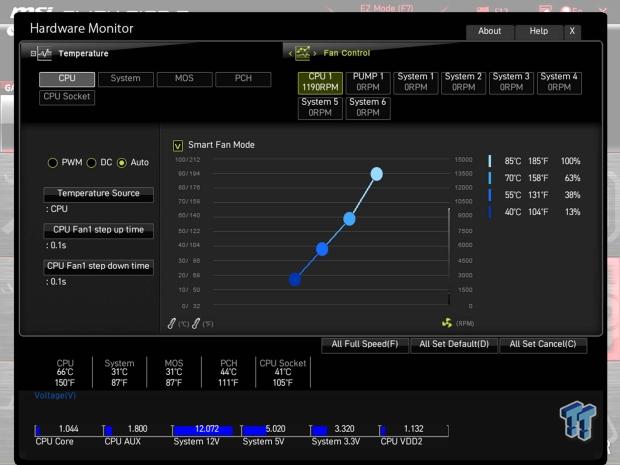 BIOS is Click BIOS 5. To the left, we have an EZ mode menu for quick changes of CPU, Memory, and storage configurations, while down below, you can get to LED, VMD, and TPM settings.

Switching over to advanced mode, you get to the standard menus for PCIe, NVMe, and CPU settings. OC also has its own section, complete with clock and voltage control. Further, MSI includes a hardware monitor that allows you to tune your fans and the curve they run.

Sabrent supports our storage testing with the Rocket 4 Plus. 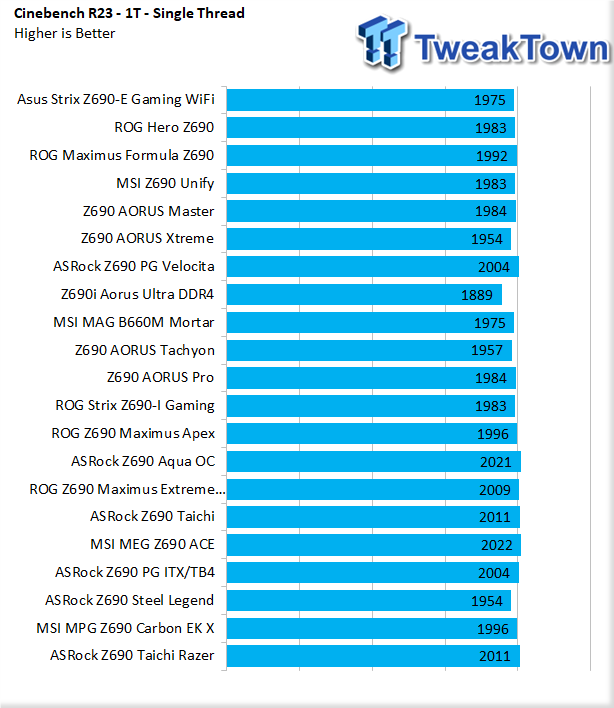 Testing for the EK X started with R23 as per usual. Within single thread testing, we reached a score of 1996 with our 12900k. 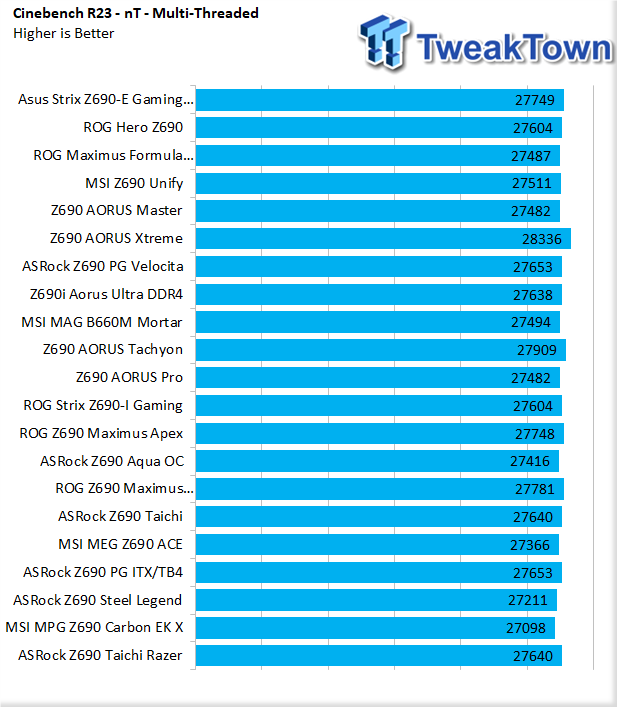 AIDA was recently updated to version 6.6, which improved performance in both AES and SHA3 workloads for Alder Lake CPUs. You will notice this performance jump in the charts below when compared to any earlier Z690 reviews. 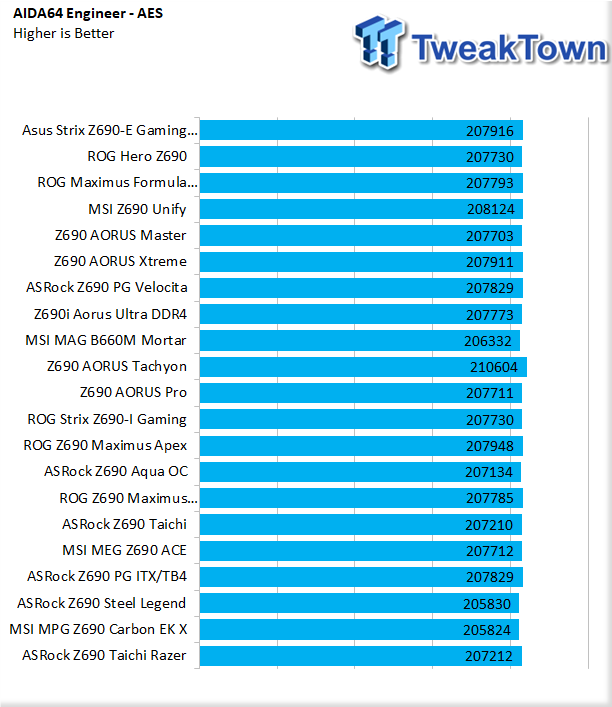 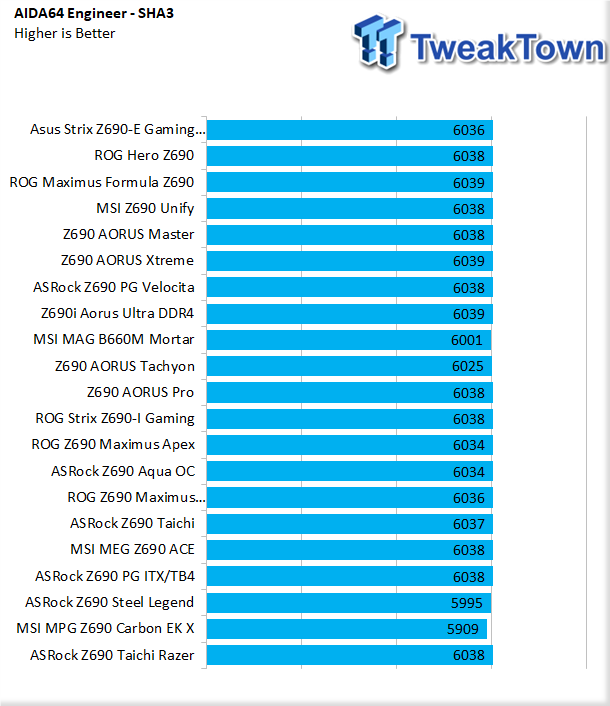 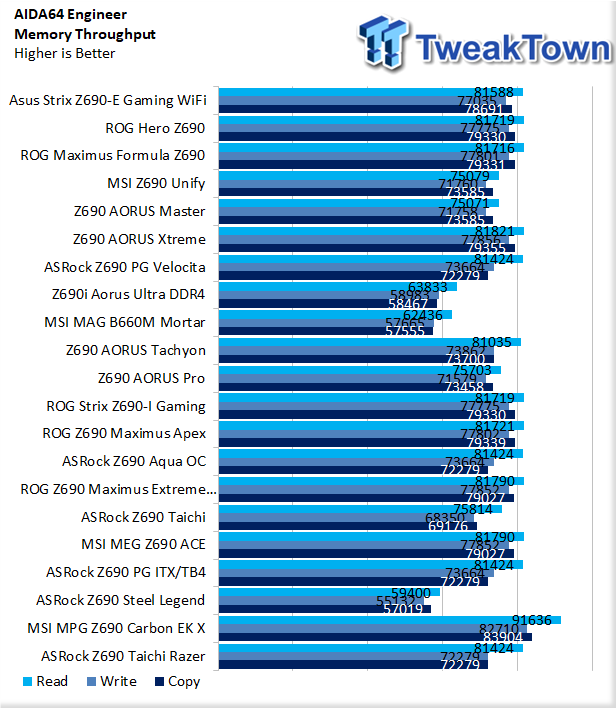 Memory throughput was right where we expected it to be for a DDR5 platform. 91K read, 82K write, and 83K copy. 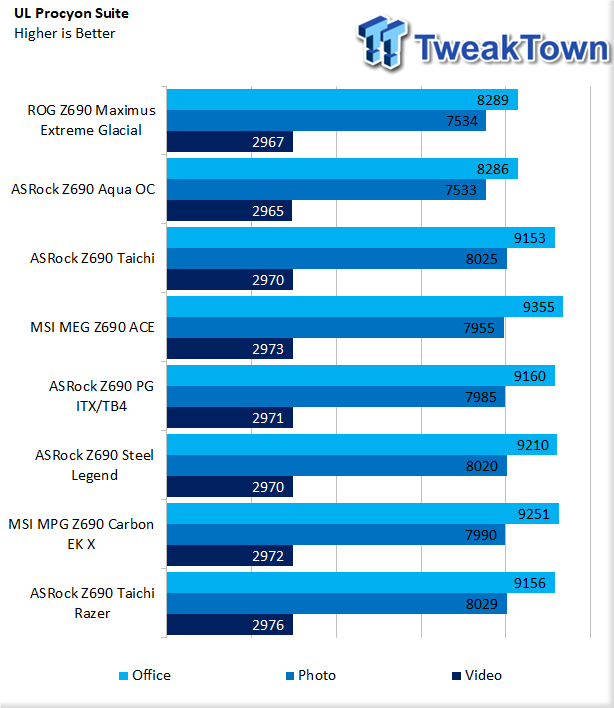 New to our testing is UL Procyon, and this offers us the ability for more real-world testing in motherboard reviews. The Carbon EK X gave us 9251 in Office, 7990 in Photo, and 2972 in Video. All three scores were on par with expectations. 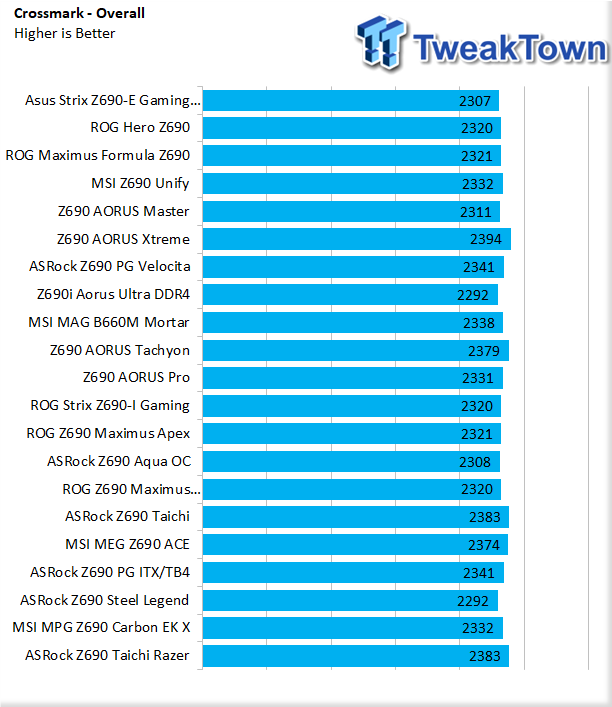 Crossmark turned a score of 2332, slightly above the working average for Z690. 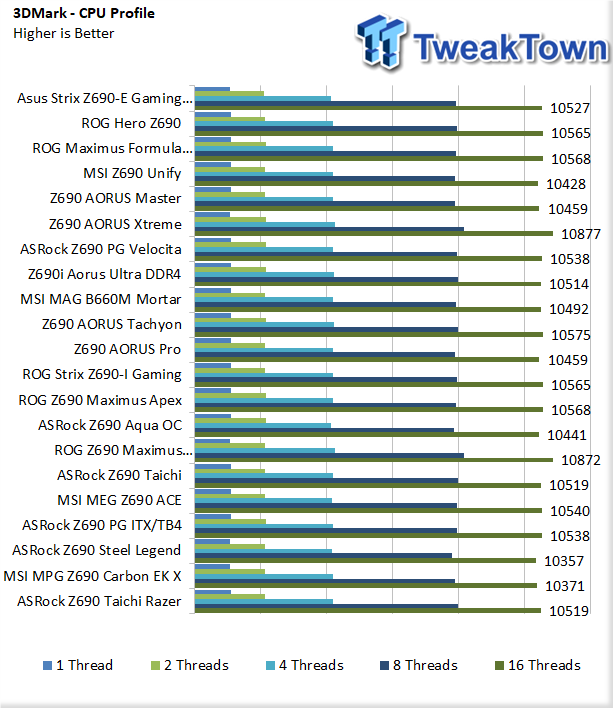 The Carbon scored 10371 with 16 threads in CPU Profile. This lands the board middle of the pack for Z690. 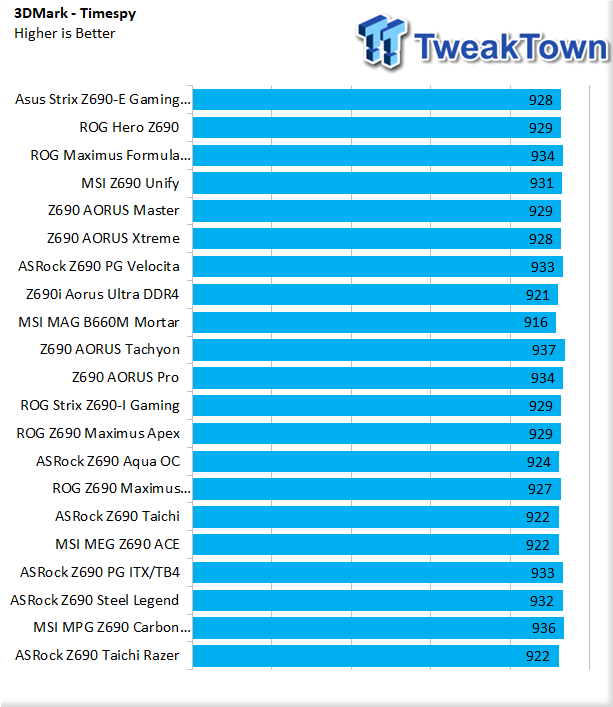 Timespy showed average results for the integrated graphics. The score was 936. 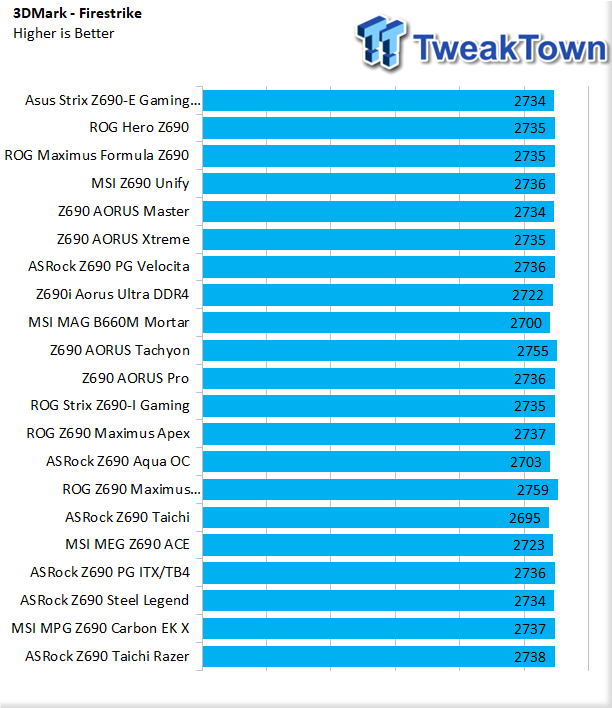 Firestrike, like Timespy, shows performance on par with other Z690 motherboards at 2737. 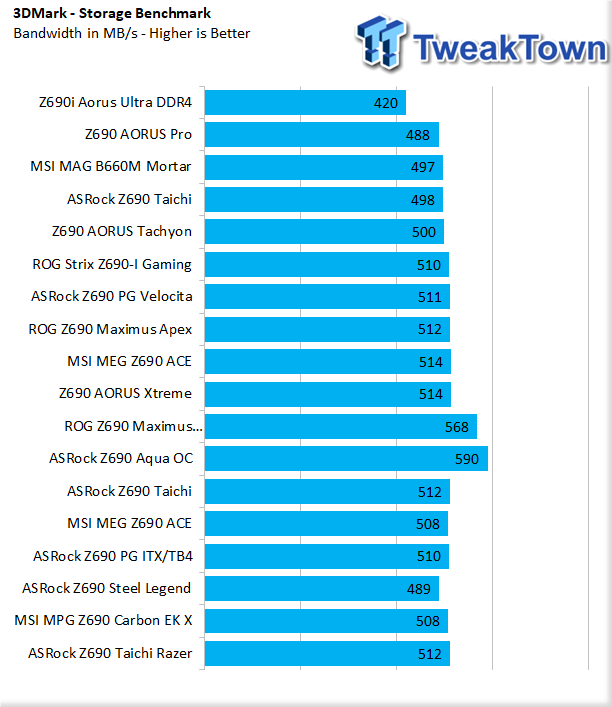 With several motherboards now tested under the new storage benchmark, we are starting to get a good idea of where our Rocket Plus should run. For the Carbon, we had performance come in at 508 MB/s. This seems to be about average for our Rocket Plus.

The Carbon EK X is a unique board in that it's the only available Z690 solution to include a water block, an EK monoblock in this case, out of the box under $1000. We can add to this the underlying platform, the Carbon Wi-Fi, which is a solid board on its own.

In testing, the performance came in as expected and on point with any other Z690 platform we have tested. As you, the reader, can see, the variance between boards is at most a few percentage points in any single benchmark. To be honest, the only time we really see any major performance differences is with early releases or BIOS that need work.

As a gaming platform, the Carbon does well on connectivity, though it is slightly limited on high-end USB 3.2 ports, sporting just five on the rear I/O with the addition of the 20GBps USB-C. That said, MSI does include four USB 2.0 ports, so you don't need to burden high-speed ports with devices like keyboards and mice. You can add three additional USB 3.2 ports via internal headers, and looking back to the rear I/O, networking pushes 2.5Gbe LAN and WiFI6e.

For consumers wanting to get into water cooling with their next build, boards like the Carbon EK X make things extremely easy by including all the necessary hardware and a custom-designed block to get you started.

A secondary benefit for the Carbon is this board's low entry cost MSRP at $629 compared to others like the Aqua OC, AORUS Waterforce, or Maximus Glacial, which are at a minimum double the price.