One of the big announcements is that AMD is bringing a new competitor to the mobile market to take on Centrino, this is called Puma and it involves quite a bit of new technology. First off its a complete setup similar to Centrino, it is comprised of a CPU, certain chipset as well as WiMAX networking - something that has been talked about by Intel in most of its press releases along with Intel partners. 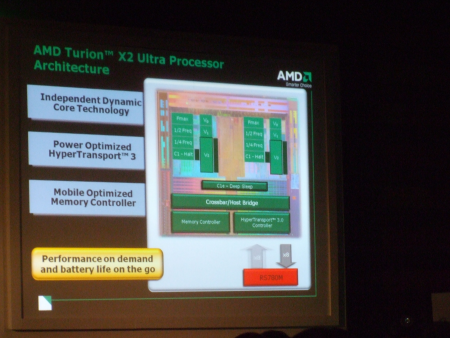 The platform's new CPU is Turion X2 Ultra CPU designed around a K10 architecture, it supports HT3, dynamic clock and voltage controls of each core - that's right, they are independent as well as some extra goodies to help maintain battery life.

Lastly is the WiMAX networking which has been talked about quite a bit but to say that 25Mbps+ transfers allowing for real time streaming of HD movie content is nothing to laugh about, nice to see AMD working to adopt WiMAX.

That's it for now; we will bring you a full review of Puma as soon as one gets into the TweakTown labs.
Newsletter Subscription